‘Mitchells vs. the Machines’ director Michael Rianda on why the art of the film looks like the final film.

For The Mitchells vs. the Machines director Michael Rianda, an important aspect in making his zany adventure (which deals with a wannabe filmmaker Katie, her slightly crazy family, and an even crazier robot apocalypse) was ensuring the illustrative nature of the look development for the movie was maintained right through to the final rendered and composited images.

Indeed, those final images—realized by Sony Pictures Imageworks—do have an illustrative style and are added to by a range of 2D animation in the film, as well. Rianda discusses that aspect of the movie with befores & afters, while also mentioning some key scenes, and even some deleted moments (one involved the members of a Build-A-Bear Workshop worshipping a giant Furby).

b&a: I had a chance to chat to production designer Lindsey Olivares last week. One of the things I said to her was that I really loved that her concept drawings, the team’s artwork, is what made it into the film, which is not always the case. What is that like for you to have a film that maintained its illustrative quality all the way through?

Michael Rianda: Oh, it’s the best. I mean, because you know, all I did was write a check box on the wall that said, ‘Make the movie look wild and different and use animation in a brand new way.’ And then I was like, ‘Well, figure it out, guys.’ I mean, not really. But it was awesome that Lindsey was the first person we hired. She was so wonderful from the jump, and her illustrations were exactly what we wanted for the movie, where they were specific and observed and full of flaws and also full of love. Sometimes that stuff can feel ‘mean’ in a character, but hers were always really full warmth for all the characters. And we really were trying to do that. I always looked at the art of books and would think, ‘Why didn’t they make that movie look like this?’ So, we were trying to say, ‘Okay, what if it looked exactly like this?’

And luckily, we’re at a studio where they had just done Spider-Verse, and Mike Lasker, who is the head of our VFX, he’s basically is the 3D boss of the movie, responsible for taking all the visuals and putting them in 3D, and he was so fired up from Spider-Verse. It was like Spider-Verse broke him. He was like, ‘Hey, what do you got next? What’s next?!’ And I’m like, ‘What if the movie looks like this?’ He’s like, ‘Yeah, what else do you got?’ And I’m like, ‘We want to draw on the screen.’ And he’s like, ‘Yeah!’

It was so cool to have him be as enthusiastic as we were, because that kind of enthusiasm is contagious. So we tried to give everyone a licence to do exactly what they wanted to do, so they’d bring everything they had into it. 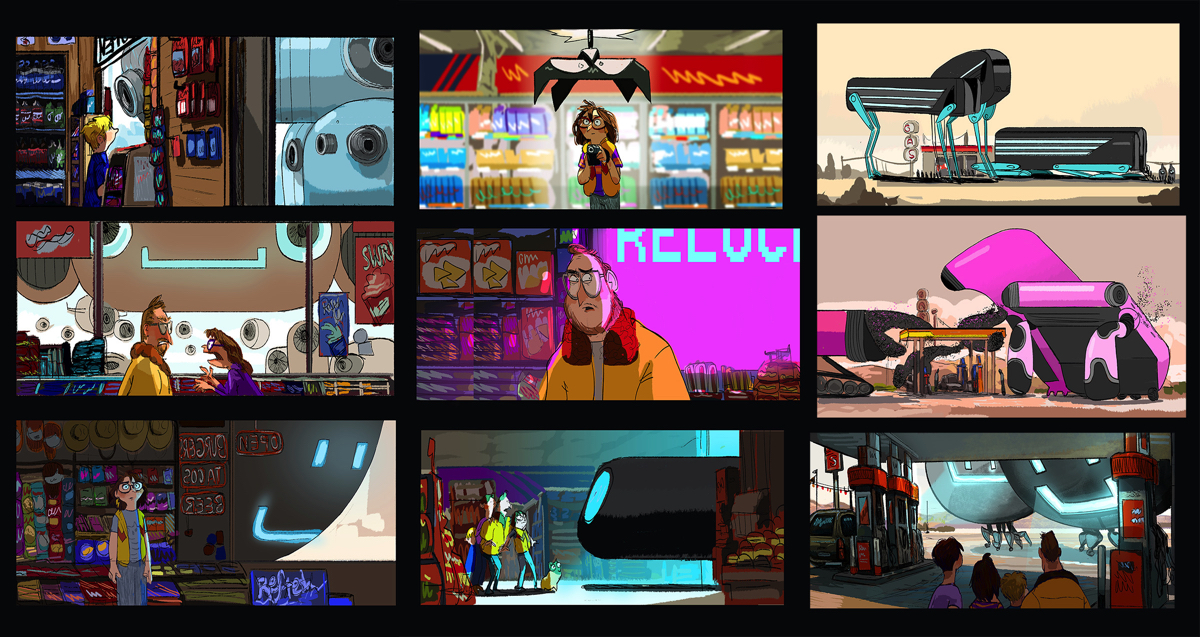 b&a: I’d love to ask you about some specific sequences, if that’s okay. As a visual effects journalist, I love the opening scene with Katie and her making videos on greenscreen. And there’s even green spill in the result. Can you tell me about the evolution of that sequence and how it just set up so much of the story, but also it had the fun film references?

Michael Rianda: We really leaned on trying to make the light feel as natural as possible, because CG wants things to be pretty evenly lit, and you have to fight and bend tools to make it look like it’s real light coming in from a window. A lot of the look just came in, not so much groundbreaking things, but just making choices like that, where it was like, ‘Oh, we’ll use really bold color.’ Even though we’re not really doing anything new, you haven’t seen this in a movie, where some scene is monochromatic or whatever.

So in that sequence, it was really about balancing. It was tricky, because we needed to make it feel really real and believable, because this is the first time you were in regular world, but we also wanted Katie’s creativity to pop off the screen and be really fun and vibrant. So we were trying to work that balance. And we did things where it was like, she makes this burger puppet. And we made sure that the burger puppet looked exactly like felt. So it didn’t look like a cartoon. It looked like something that she could actually make, and the legs are straws.

We were trying to like really think about how a kid would do this. We were inspired by these filmmakers we looked at online, these teenagers, who would make films. And speaking of the greenscreen, we wanted to show her progression from, okay, first she’s making films with cardboard and puppets. And then all of a sudden, oh, she’s figured out a wind machine and a greenscreen.

It’s funny, one of our animators came up with that for a different scene. And we’re like, ‘Whoa, that really makes you believe that she’s a good filmmaker.’ That she’s smart enough to be like, Okay, got to be a wind machine and got to put up a greenscreen and that sort of thing. So we used it in that part to show her evolution as a filmmaker, to show that she’s evolved. And hopefully, by seeing that evolution, you’d respect her more, because you’re like, ‘Wow, she’s actually good at this.’

Because we learned that if it seemed like she wasn’t good at filmmaking, the movie fell apart, because the audience is like, ‘Honey, you shouldn’t be going to film school. Rick, you’re right. Stay home.’ And there were certain points where the movie was like that, where her movies were so wacky, they didn’t have integrity to them. So we had to tweak filmmaking and have that greenscreen feel real and stuff, to make it feel like she was actually learning.

b&a: Can I jump to the Furbies?

b&a: I just love the giant Furby. What did you find was hard or tough about that scene? Because it is completely wacko, but it’s fits into the film. I don’t know how you did it, but it just fits into the nature of the film.

Michael Rianda: I don’t understand it either. I mean, I think it just comes from the things that made me and Jeff Rowe, who was my co-writer and co-director, laugh. But we were like, ‘Can we pull this off and still have a tender father/daughter scene?’ And the thing I think that makes the Furbies work is the fact that it’s so super real. It’s the most photorealistic thing in the entire movie. 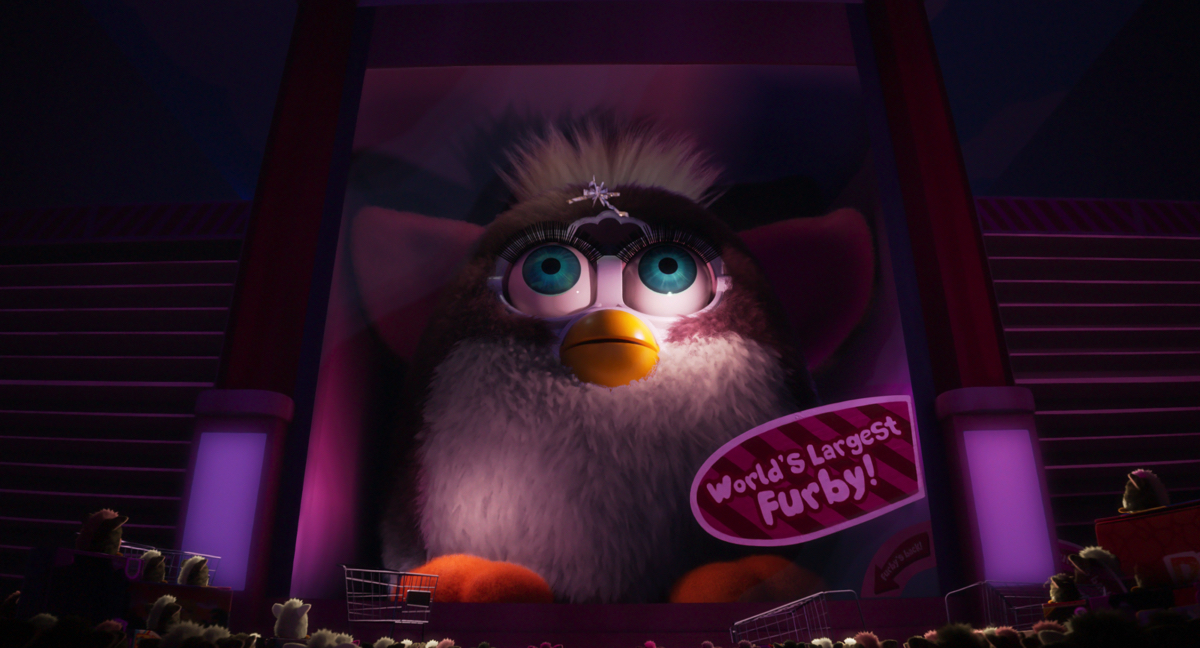 Normally we would hand Imageworks these really complicated drawing things with schematics and characters doing stretches and here’s how their spinal column works. And with the Furbies, we just gave them a Furby. We’re like, ‘Make this, please.’ And they’re like, ‘Perfect. This is the best model we ever got.’ Because they could just really get into the detail of it.

In terms of the filmmaking, we really wanted to play the stakes of, ‘This is actually terrifying!’, as if it feels like the Balrog from Lord of the Rings. At a certain point, we took that too far. Actually, this is my favorite thing that’s never in the movie. We still had the Furby, but there was a Build-A-Bear Workshop, and it was like, ‘Whom do you serve?’ And it’s like, ‘Fur-by.’ But we had to cut that, because it was too insane.

b&a: The other thing that made me lose my shit was Linda Mitchell going completely ninja. And Alan Hawkins did tell me about the special approach with those robots, but I’m really curious about turning a character like Linda into what’s essentially a different character.

Michael Rianda: Speaking of Alan and the animators, who are wonderful and did an amazing job in the whole movie. I did have to say, ‘Guys, pull back, pull back.’ Because they had done movies like Hotel Transylvania and I was like, oh no, no, no, no. They’re great at that, and that’s wonderful. But this movie, for it to work, I think it has to be more grounded. You have to see a character scratching the side of his mouth and, and going really subtle for the acting and find ways to make the observation, the fun of the scene, as opposed to make the invention of having a character’s eyes bug out would be the fun of the scene. But, in that Linda moment, I really got to let them loose. And the animators had so much corked up like, ‘I want to go crazy.’ I was like, ‘Guys, go nuts.’ They had so much fun with those scenes. 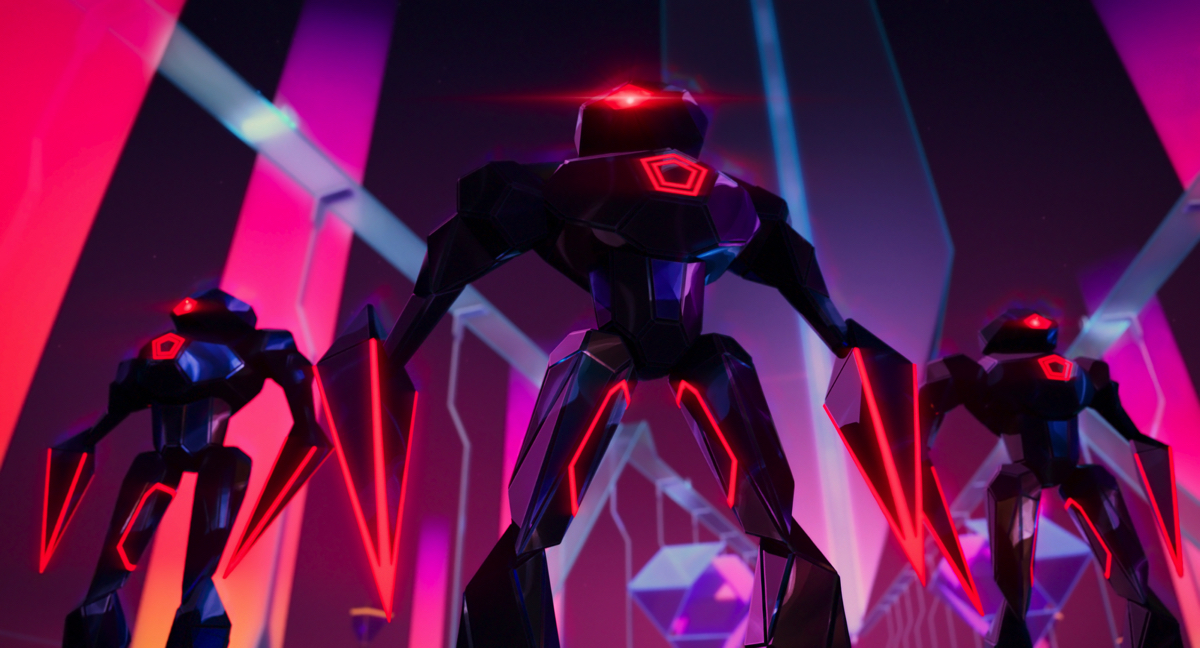 A lot of it was in the boards, the storyboards. Guillermo Martinez boarded that scene immaculately. If you see the boards, it’s very one-to-one, in terms of the cinematography and in terms of some of the acting. But then the animators really stepped it up in the acting. Then I’d be like, ‘Alright, now she’s elbowing someone! She does a power slide!’ They had a lot of fun in iterating on it.