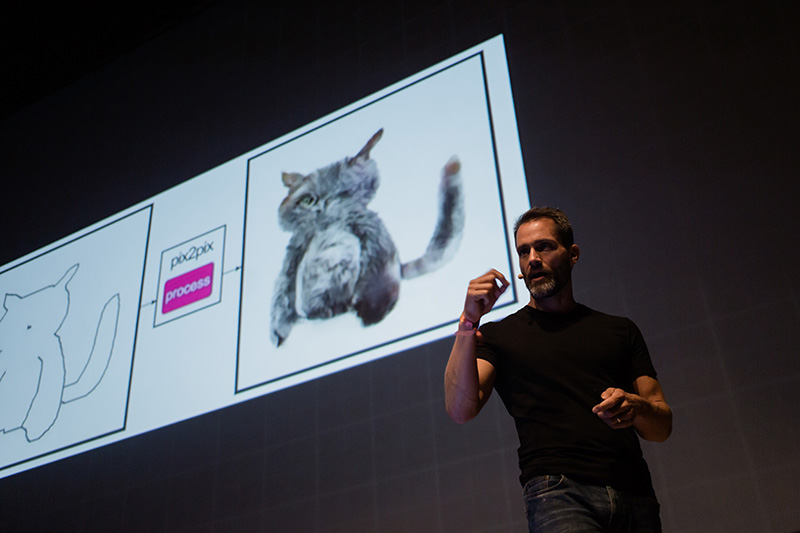 At befores & afters I mostly cover VFX and animation in mainstream productions, and sometimes that includes diving into machine learning and A.I. techniques used by studios and artists to help craft the final imagery.

One use of A.I. I hadn’t explored, however, it was for more artistic endeavors. At Trojan Horse Was a Unicorn, artist and designer Scott Eaton – known mostly for his explorations into human and animal anatomy – showed off his work into neural networks and drawing figures and forms.

All this work had been presented at an exhibition in London in June. In some ways it’s hard to describe what’s going on, so here’s how Eaton himself describes it as his website (http://www.scott-eaton.com/)

The idea behind this “AI tool” is that I train it to learn the correspondence between my drawing style and photographic representations of the human figure, in this case, photography carefully lit and shot by me in the studio.

Then, once trained, I can use it to dynamically ‘paint’ my drawings in the style of my photography. It is a wondrous interaction, and there is a magical space where I can draw very stylized or abstracted figures and the neural network infers some very interesting anatomical results, always beautifully lit and shaded.

The best way to examine the work is to watch Eaton’s videos and to even go into the exhibition archive (reproduced as an immersive 3D space here).

It was captivating on the stage to see these pieces come to life from the artist’s mostly hand-drawn inputs. Eaton has also been experimenting with photographing fluid elements and simulating those with human abstracted figures in a similar way.

In the end, it felt – to me – like an entirely different kind of artwork and expression. I’m so glad I can see these sorts of presentations on THU.