VFX supervisor Stephane Ceretti breaks down the design and visual effects behind the mysterious Deviants in ‘Eternals’.

A couple of early trailers and clips for Chloé Zhao’s Eternals provided some glimpses of mysterious ‘ribbony’ and tendrily alien creatures. I knew right from those first glimpses that I wanted to chat with the visual effects team about those creatures—called Deviants—and how they were designed, whether anything could be filmed for real on set for them, and how the VFX vendors brought them to life.

So, I asked Eternals visual effects supervisor Stephane Ceretti specifically about the Deviants, in this interview for befores & afters. Here he outlines what kinds of influences and iterations made them possible, and what approaches could be made to accommodate shooting scenes in which they appear even as their designs evolved.

b&a: For the creature Deviants, can you outline briefly the kinds of concepts and early design iterations that were done for them? In particular, what kind of movement/animation tests were done to establish their behaviors, and to explore their ‘stringy’ and tendrily body form/muscles etc?

Stephane Ceretti: The Deviants went through a lot of design iterations before Chloe saw something that she resonated with. We started with monsters that looked a lot like chimera from ancient myths and legend but we didn’t really feel like re-doing something that we had seen before in other films. Chloe wanted to make them look quintessentially alien and not your usual monster made with scale or hair and flesh. The vizdev department at Marvel lead by Ryan Meinerding did a lot of work trying to define all those ideas.

We ended up with a family of monsters that looked somewhat familiar to what you could see on earth in terms of overall shape but very different in their materials and internal features. Here again we had a lot of influence from both alien films and manga or anime like princess Mononoke. Chloe wanted the Deviants to be very colorful too, so we came to this very slick and iridescent material they’re made of, feeling both metallic and organic. It’s pretty odd and unusual and created a lot of challenges in terms of integration in the very naturalistic plates we had shot on location. It was a very bold artistic choice from Chloe to try something quite different and unexpected but it served the story. We can see that these alien are definitely not earth like, but as the evolve on earth they are initially very big dinosaur like creatures and as time goes they become more nimble and agile, the same way animals evolved on earth, just in a much shorted timeline. 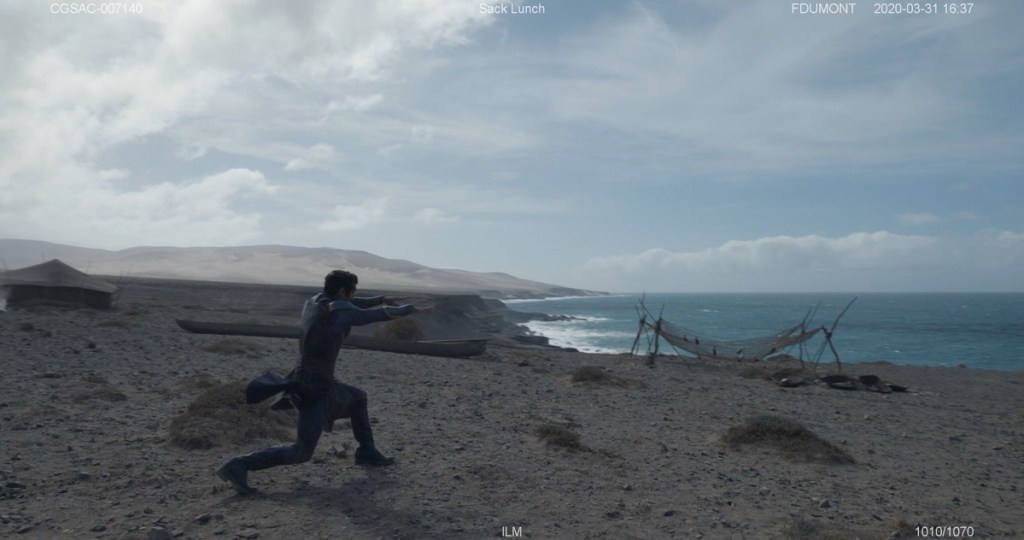 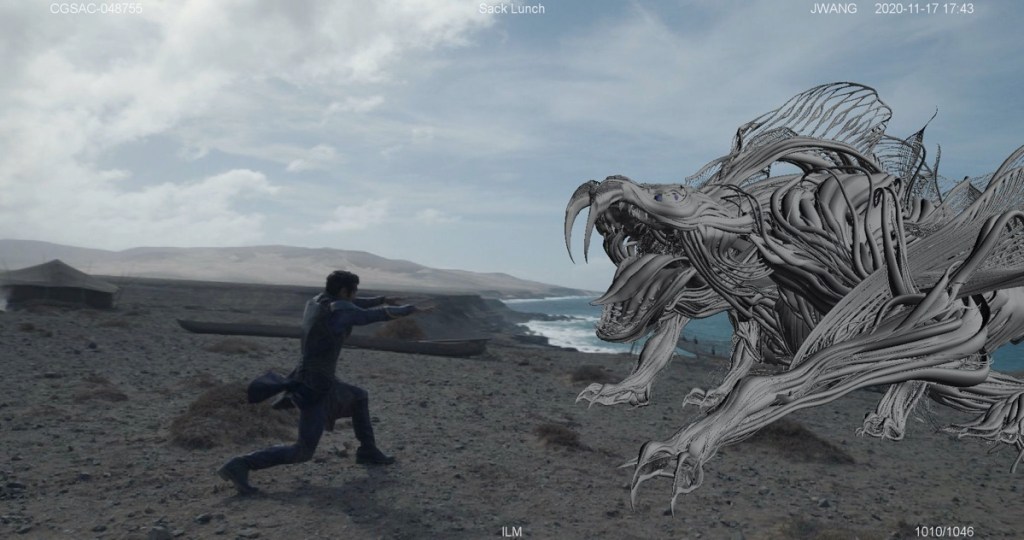 ILM was in charge of building most of our Deviants including their leader Kro. They shared it with Weta who did the final phase of Kro at the end of the Amazon battle and in the final battle after its transformation by ILM. Also Weta took over the ice cave transformation scene where all the Deviants evolve to become more powerful after the death of Ajak. Chloe showed us a lot of videos of animals in the wild and she wanted to mix natural animal behavior with something much more jittery and extremely sharp when it comes to their attack tactics.

ILM was in charge of the scenes involving all the Deviants attacking humans (except for London which was done by Scanline) and we worked a lot together on establishing how each Deviant would move and how they would use their characteristics. They all had names like the Bull of Heaven in Babylon, or the bat Deviant, or the fang Deviant, or claw etc etc … so their combat style would match their most specific physical attribute.

b&a: What kinds of things did you consider could be used on set to stand in for the animal-like Deviants, say, cardboard cutouts or stuffies or actual partial builds etc? In the end, what did you ultimately rely on for actor interaction and camera framing etc?

Stephane Ceretti: We collaborated with our stunt team to have the physical actors interact with them on set. We actually had two main guys who were helping us during the shoot to “be” the Deviants. One of them was specifically good at doing quadrupeds, used arm extensions to be able to walk on all four all the time and we used him a lot in the amazon forest battle.

The second one was the same guy who does Chewbacca, he’s tall! He could be our Kro when he’s a biped but we also had him for other Deviants. For the shots that required a lot of physicality like all the shots when Ikaris gets trampled over in the Amazon forest we had them interact with the actor, lifting him up, pushing him on the floor with the help of wires etc etc. It was pretty nasty at times! But that’s what we wanted to make all these moments very visceral and as real as possible. We also used a selection of eyeline poles, cardboard cutouts and bean bags to frame the shots. Sometimes we had eyeline poles attached to the back of our stunts for framing as well.

b&a: Similarly for Kro, how was this performance captured on set, and what was the workflow to ultimately bringing the character to life?

Stephane Ceretti: For Kro v3, when he is fully evolved and able to talk we decided to do facial capture on set and bring Bill Skarsgård to play the scene in the cave with Angelina Jolie, as this was such a pivotal and emotional moment in the film we felt like we would get the best performance this way. Even though some lines got tweaked a little bit later for story and editorial reasons, and we did other recording sessions (always with helmet camera), having the actors together was always a huge plus for the credibility of the moment. 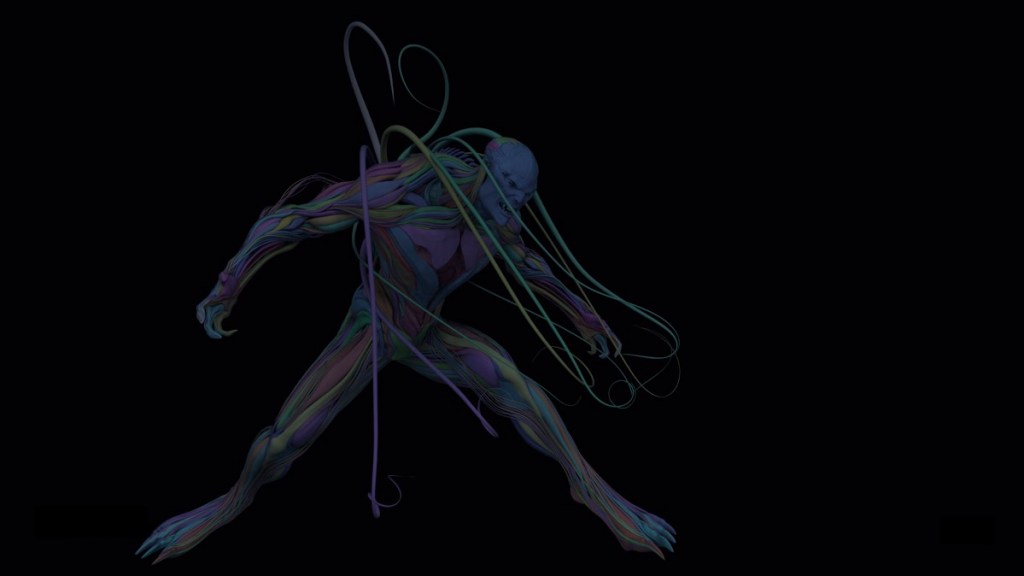 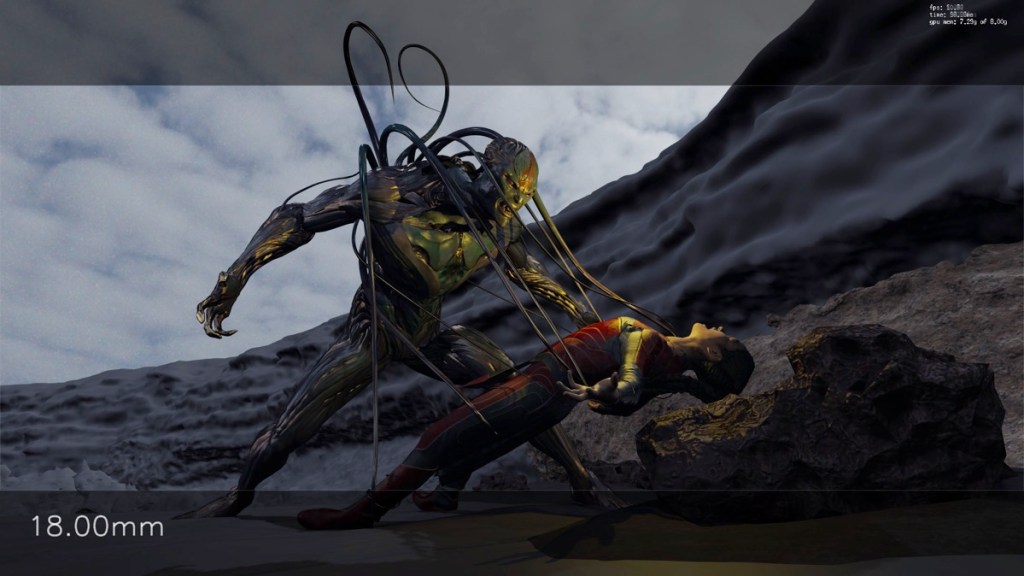 b&a: For that opening scene, can you break down a little the kind of planning that went into shooting that on a beach, how you would deal with water interaction, and also moments when the fighting against the Deviants needs to go ‘aerial’? What approach did you take here to gathering what you needed for VFX plates? Did you adopt a similar approach for the London, and later Amazon jungle scenes, or were there different shooting challenges there?

Stephane Ceretti: Funny enough for the opening scene we had very little time to prepare it. The location we initially had which was an army ground on the Canary Island of Fuerteventura was not an option anymore as some ammunition had been discovered close to it and we had to relocate. We found this beautiful little cove and also the clifftop area and the art department rebuilt all the little huts there at the last minute. It did change our plans quite a bit! The dad ended up being a fisherman eaten by the first Deviant coming out of the water and all the commotion that follows was pretty much choreographed on the fly, as a mixture of main and second unit.

That’s why I am glad we had Dan Deleeuw as our second unit director. I had worked with him before at Marvel and he’s a fellow illustrious VFX supervisor. Also my second supervisor, Marten Larsen, who’s freakin’ amazing, was there too! We could roll with the punches more easily and get the stuff done this way. You can imagine that at this point most of the interactions for the Deviants with the water and the destruction in the village was mostly CG. Also the aerial battle with Ikaris came up much later in post. We didn’t really have that big fight there and Ikaris seemed to leave with the Deviant and not do too much initially. We wanted to make it a bit more exciting to begin with. ILM took over the previs from The Third Floor and refined the scene. We had done a lot of aerial photography around this area but most of the BGs here are full CG too.

The scene in the Amazon was much more planned than this and we had a full previs for all the beats. It was the first big action scene we shot entirely on location in England. The forest was augmented in camera by the greens department but ILM did add a lot of hanging vines and also a lot of the tropical plants you see interact with the Deviants. The big challenge there was definitely integration and interaction with constantly changing lighting scenarios and complex shadows and depth within the trees.

London was a bit more free flowing, too. We ended up picking up the Camden location pretty close to the shoot and blocking the action a little bit more on the fly. We knew we wanted to have the specific beats like Kro coming out of the water, the multiple sprite illusions, the car and hot dog stands being destroyed by Kro, the shop front being crashed in (all in camera SFX that were really successful) and obviously the bus transformed into petals. We did previs some of those (especially the illusions and bus stop as I had to be able to plan how to shoot those a bit more precisely). But Chloe is a very intuitive director and she likes to plan but also let herself be influenced by the environment and the conditions we are shooting in. We had to learn to adapt and really just trust that we would be OK no matter what!

b&a: In terms of final animation and FX for the creature Deviants, can you talk about some of the challenges here, especially selling their very fast and frenetic motion so it would be readable?

Stephane Ceretti: It was all a bit challenging. The Deviants were really complex in terms of their animation style and their look and we had to find the right balance between visibility/readability but also their deep nature. Also a lot of the scenes were pretty dark so we had to play with this a lot and emphasize some motion of lighting a bit more in places to make sure you could understand what was going on.

That said, the Deviants needed to be scary and you don’t always need to be so descriptive in that case, it can be more about the energy of the shot than the readability. Chloe’s camera style is very much embedded in the action but at the same time very smooth and the audience is very much a witness of what is going on. So we didn’t use the usual artifice of shaky cameras and quick cuts. We did a few long oners and the action needs to be the driver here. That’s why the Deviants had to move in a frenetic way to give that sense of urgency that the camera wasn’t giving us necessarily. It was a tough balancing act.

We wanted the Deviants to be actually wounded in the battles. If you play close attention you can see that Claw Deviant, for example, starts the battle in the Amazon pretty clean but the more he fights against Ikaris you can see more and more wounds and burn marks on him. At some point he loses a couple of eyes because of Ikaris burning his face in the long oner where they fight on the ground after destroying the cabin. The tail Deviant who attacks him in front of the “Church” in the camp gets cooked from the inside by Ikaris’ beams. Also Ikaris crushes and burns Bat Deviant and pulls one of his wings out! It’s pretty gnarly at times! For Chloe it was essential that we could see the damage inflicted by the Deviants to the Eternals but also the other way around. Again it was all to make it more visceral and real.