And, how you can download the alien creature animated with Control Rig from the short right now.

You may know Aaron Sims and his company, Aaron Sims Creative, as a leader in creature design, but lately they have also jumped head-first into real-time filmmaking, particularly with Unreal Engine.

befores & afters caught up with Sims to discuss how the film was made in such a short space of time, including the mocap and creature work involved. Plus, you can now access the ASC ‘Teuthisan’ alien featured in the short animated with Control Rig in UE5. Find it in Epic Games’ Marketplace.

b&a: Tell me a little about the story process for The Eye — how did you  come up with the time loop idea?

Aaron Sims: One of the hardest things to do with a good sci-fi story—any story, really—is nailing the ending. The “loop” concept originated from a collaboration with my co-writer Vivian Yoon in order to have the impactful ending that I wanted. We bounced several ideas back and forth between us, and when Vivian mentioned the idea of an inescapable time loop, it hooked me and we fleshed it out to work in our story. It was a very collaborative, creative process, working through the narrative, and I’m so happy we went with that particular idea. We just wanted to ensure that we had a story that felt complete and that the audience cared about Valentina, the main character, and her journey. 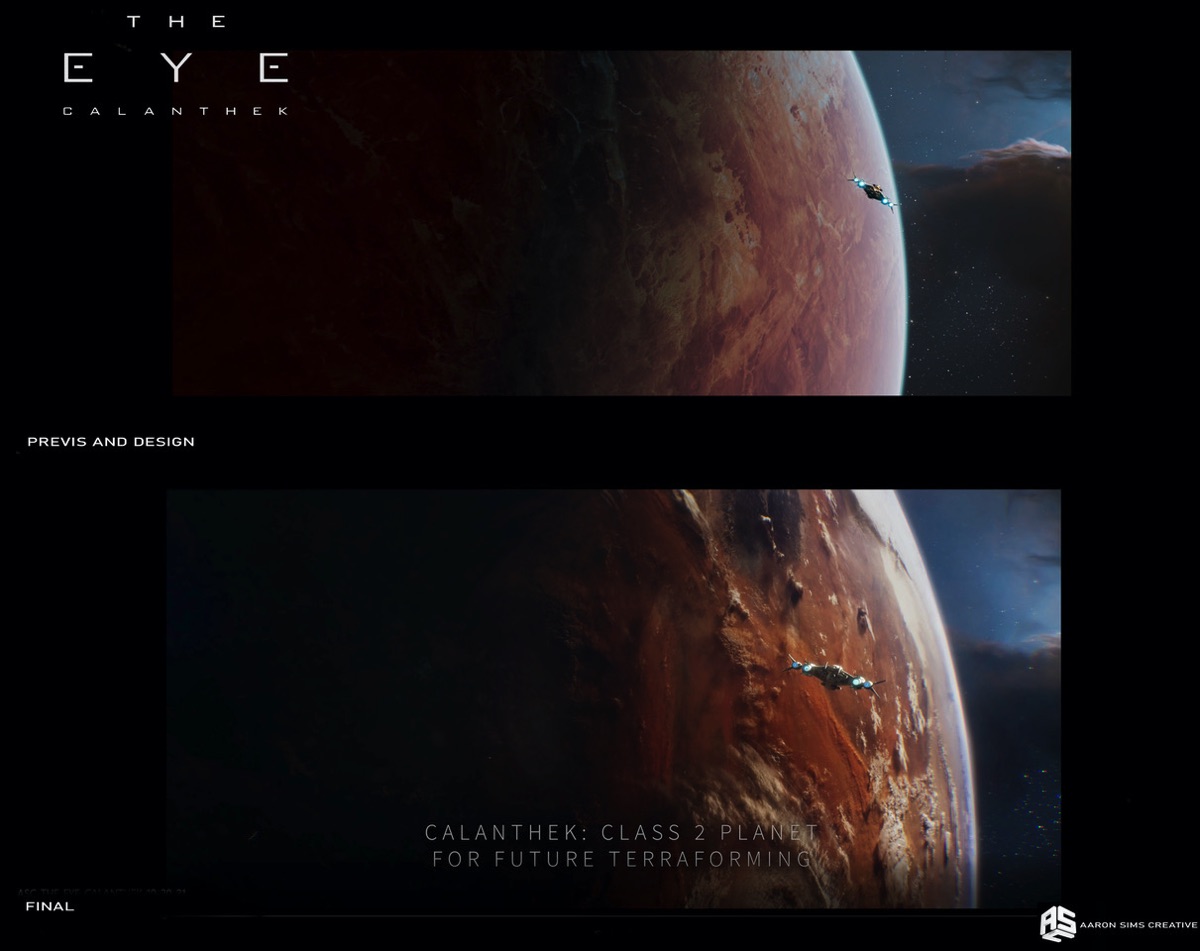 b&a: You made the film so quickly – what approach did you take to writing, any storyboarding, concepts, previs etc in such a short space of time?

Aaron Sims: In retrospect, it’s a bit hard to believe that we made this film in six weeks. I was the creator, director, and co-writer, and the crew was relatively small—so it’s rather remarkable to think that we not only completed the short in that amount of time, but produced something that we are incredibly proud of. Developing a story while the actual short was being created might sound crazy, but it was the only way I could have completed it in this time frame. It forced us to not overthink, and since we could actually see the film as we built it, we knew if a plot point had the impact we intended or not.

This couldn’t have been done without Unreal Engine’s real-time rendering and powerful animation tools. I thought of the story and immediately started developing the look of the world while iterating on the narrative. If we had more time, I might have decided to storyboard the film, but working this way I was actually writing in real time using Unreal Engine and not spending time on beats that the team might really love to include, but I couldn’t achieve in-engine.

Another time-saving feature was having my own Xsens motion capture suit. All the motion capture was done in my living room, so I could begin previs very early and discover if things worked or not and avoid having animators waste time creating footage that might not be used. The mocap was applied to the asset for our main character, Val, and since I had already designed and built the alien world of Calanthek in Unreal Engine, the process went really quickly, as the story was coming together. 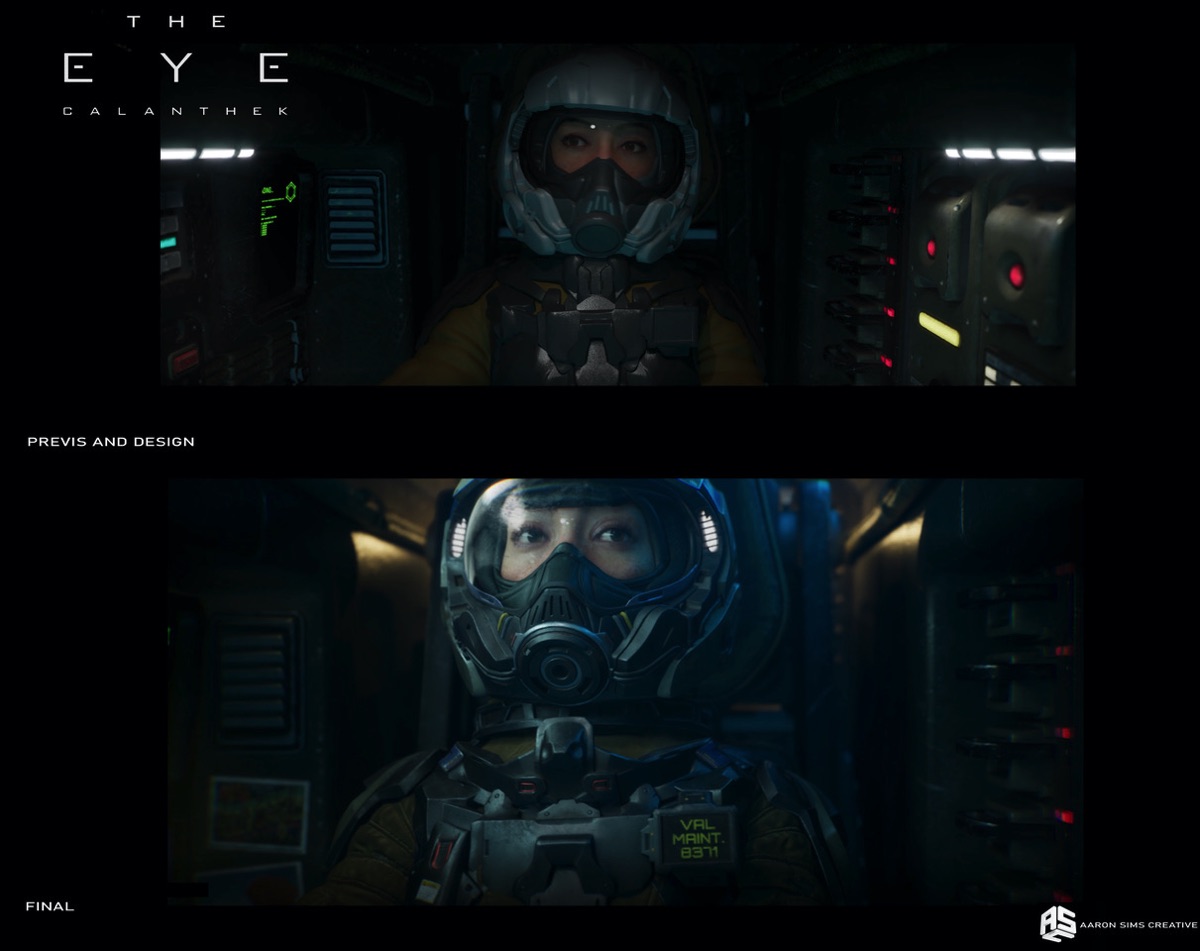 b&a: On an overall level, what did making this in UE5 let you achieve, that you possibly couldn’t have achieved previously?

Aaron Sims: I knew going into this that I could have safely created this film in Unreal Engine 4, since Unreal Engine 5 is still an early release and not tested to this level of filmmaking, but I wanted to use UE5 on this project to leverage the new tools and features and really see what the limits were. I also knew that if I were to hit a wall, I could pivot quickly and find creative ways around any obstacles as long as there was stability from the Engine. It saved time on so many aspects: lighting with Lumen, using Nanite for static meshes, and using MetaHuman Creator. I don’t think the film would look nearly as good as it does if I hadn’t used UE5. 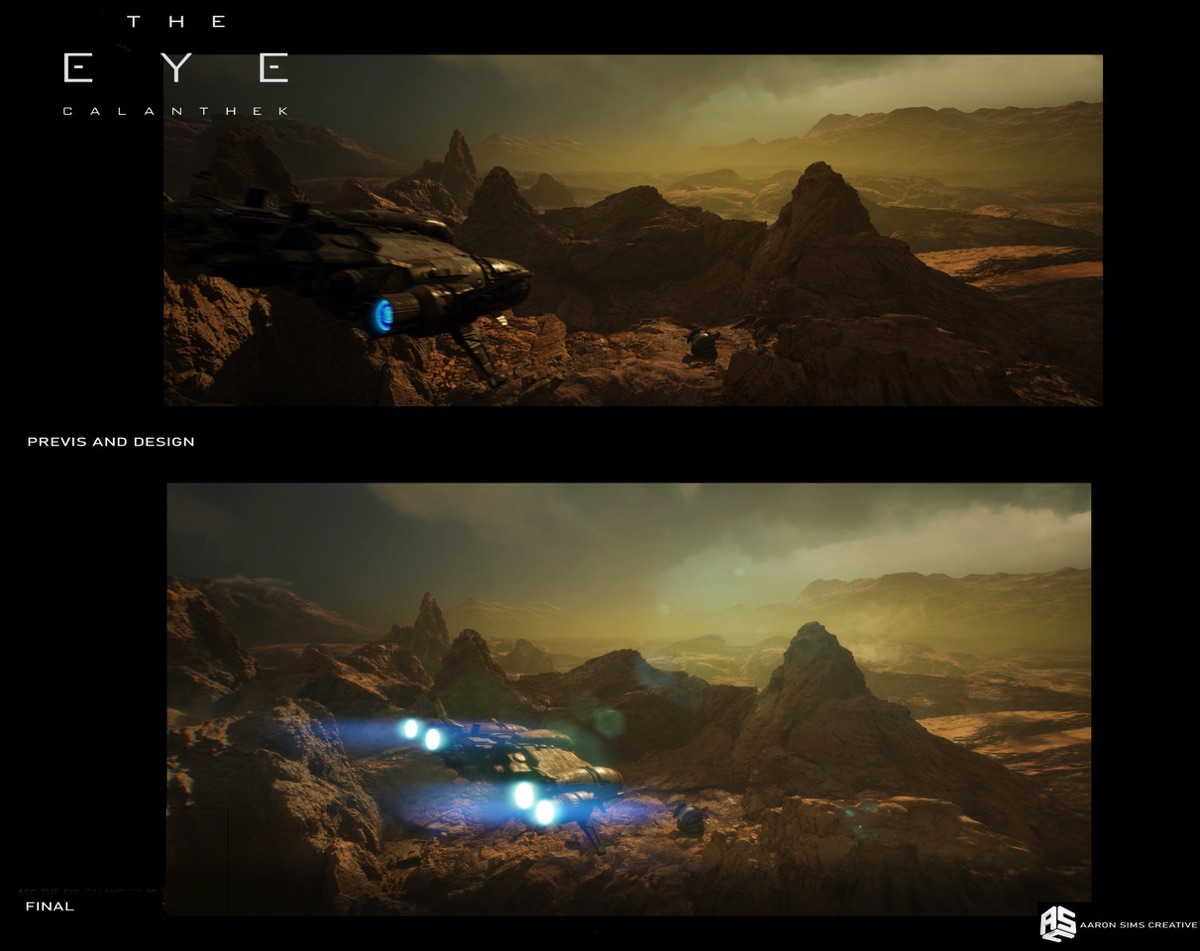 b&a: The ‘textures’ of this world are just so beautiful — can you break down your approach to design, concepts and taking that through to asset build and particularly texturing? How limited (or unlimited) were you in terms of game engine rendering here in Unreal?

Aaron Sims: Using Unreal Engine 5, I knew I could experiment with high-res assets as I was designing, and this allowed me to sketch out the alien world very quickly, practically seeing the final product immediately. As an artist, that’s groundbreaking, and was the key to making this film in the time we had. As soon as I had an idea I was able to see it on the screen. Texturing in UE5 is really simple even though you can make it incredibly detailed. With UE5’s Nanite, I was able to capture the realism that I wanted by using the highest resolution possible, and the magic of Lumen lighting and amazing real-time global illumination made the world come to life. 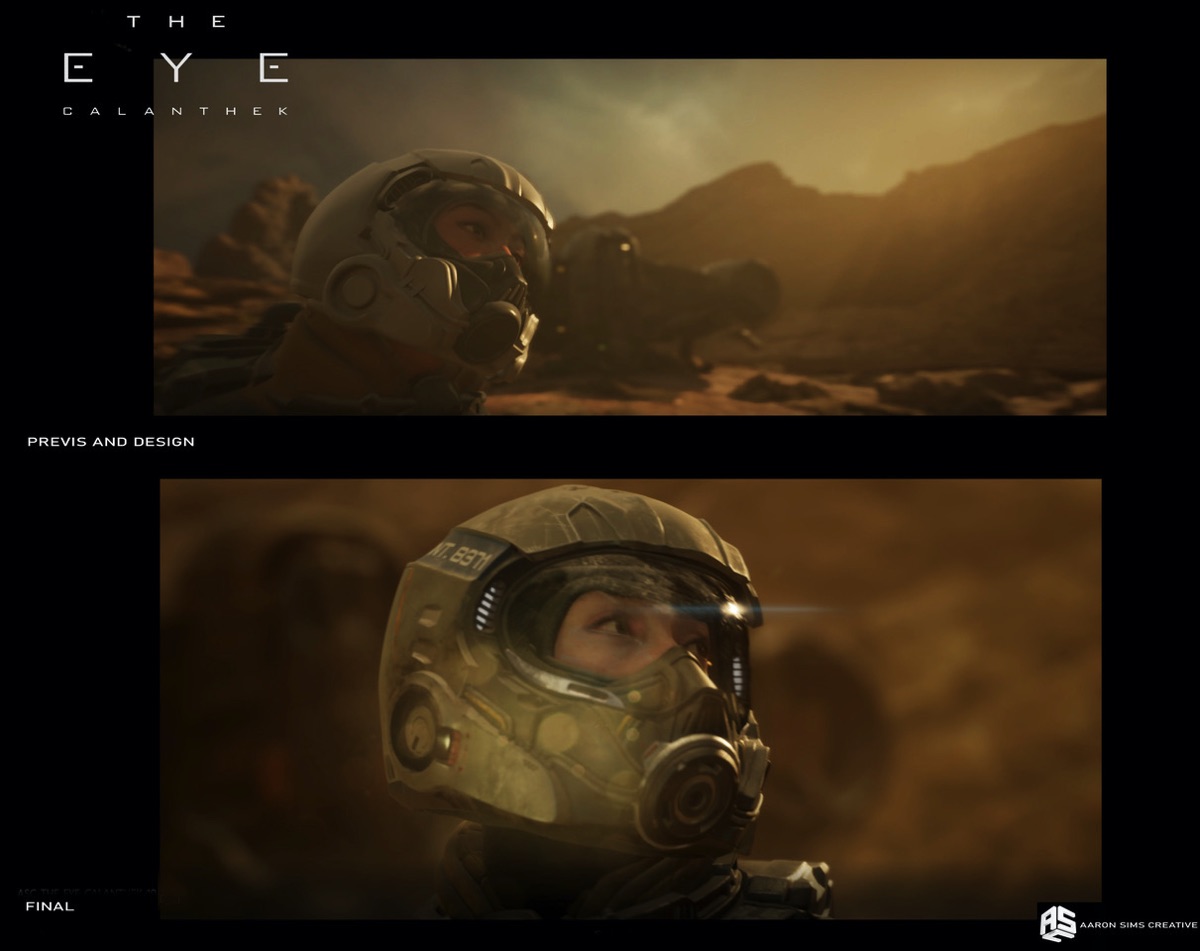 b&a: How did you tackle the main character’s body and face animation? Can you discuss the body mocap and facial mocap approach? How did you specifically use MetaHuman Creator here, too?

Aaron Sims: Using MetaHumans for this project was another huge game-changer. Previously, it would take months to develop a photoreal human – getting all the subtle nuances of expressions, and MetaHumans offers that. This tech is new to all of us so I enlisted the help of a talented company of artists, Shapeshifters Creative VFX. They assisted with Val’s expressions and features, shader adjustments, rigging her body for the spacesuit (which was created at ASC by one of our talented artists, Vilson Martins). Shapeshifters also assisted with applying the mocap data onto the rig and helped me work through using it properly (like baking the mocap onto a control rig to modify the data in Unreal).

We finalized Val’s mocap with animation cleanup and face animation once the story was complete. ASC animators Jonathan Song, Nathan Glemboski, and Alex Temiroff provided some final rigging in the engine, and we had the help of Cubic Motion to provide some final face animation to bring Valentina fully to life. 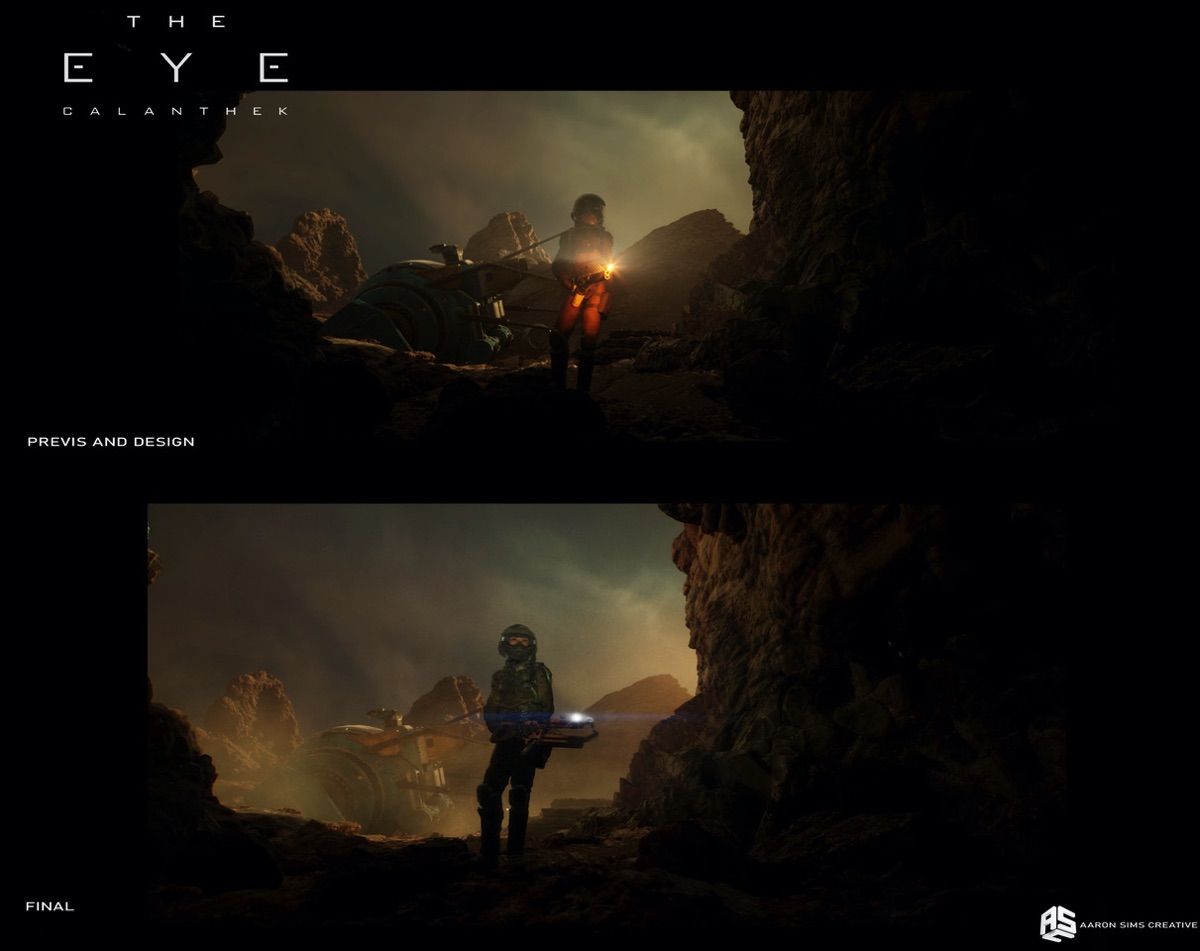 b&a: For the creature she encounters, what was your approach in terms of the design here? What were the challenges of maintaining such an ‘organic’ look and feel to it?

Aaron Sims: The creatures needed to look as if they could survive on a planet that was deadly to humans if they weren’t wearing a spacesuit. I looked at actual animals that live in the extreme climates of earth, like the most arid deserts or deep-sea heat vents, and decided to design the creatures with an insect-like appearance. I’ve been a creature designer and maker since the 1980’s, so this is a method I use often, referring to nature first when designing. I also had my talented creature artists at ASC, Ehsan Bigloo and Daniel Carrasco, help bring my vision of these creatures to life.

Unreal has incredible real-time subsurface skin shaders that helped achieve the look I was after for the skin textures. The animation was done in different ways. The small, scorpion-like bug was entirely keyframed by Jonathan Song, and the main creature (known as “Teuthisan”) was first mocap-ed by Christopher Graham (who also was the mocap artist for Val) for the previs.

I loved the natural, organic look of the creature mocap, and animator Nathan Glemboski refined that capture and also animated the face of the creature and the cockpit attack, all animated with a control rig in Unreal. It is so powerful and helpful to animate “in-scene” using the appropriate lighting and not have to import and export to other softwares. Again, this helped save time.

b&a: One really amazing thing I loved was just the lighting and atmosphere in the cave from her torch on the weapon – how tricky (or how easy) was this to achieve and how did you approach it?

Aaron Sims: My background as an illustrator really came in handy here, as I’m always looking at lighting as the key to the mood of the image I’m creating. With film, similarly, lighting is one of the most critical aspects of cinematically creating a mood and evoking emotion without words or sound. With the cave and the welding gun’s flashlight, I had assistance from Shapeshifters Creative with ensuring the glow from her light would look correct, meaning the volumetric beam.

This can be tricky to create because there is occasionally “ghosting” on fast-moving volumetric beams. I added fog in the cave both for depth and to make the light beams more pronounced. UE5’s Lumens also has nice GI bounce features, and to help the bouncing light on the cave walls, I “parent-ed” some lights onto her welding gun. Finally, I added some lens flares to help that feeling of realism. 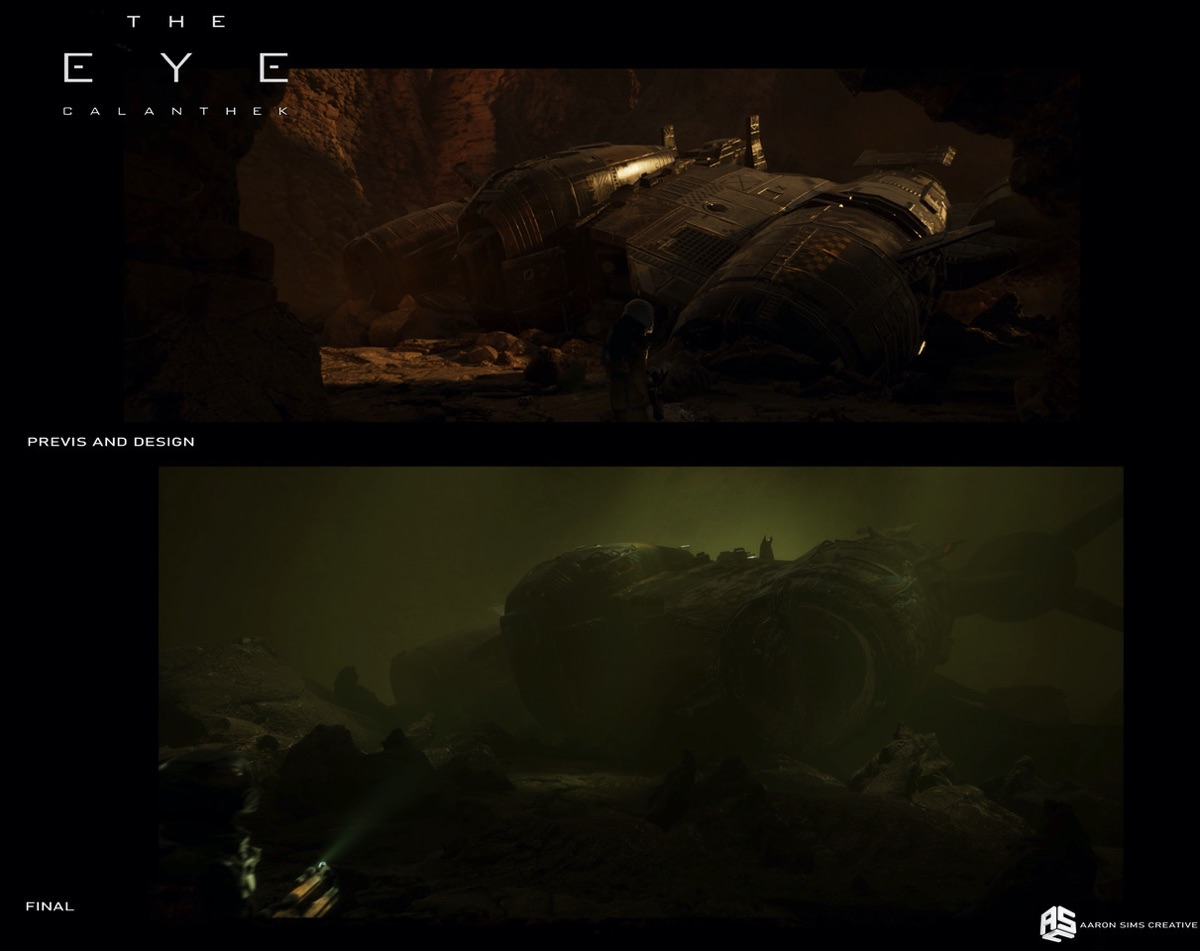 b&a: In terms of making this in Unreal Engine, what do you feel you did differently just in terms of layout or shot design, or editing, that may have been different from other shorts/pieces you’ve made in the past? Or, in fact, is the process not really that different?

Aaron Sims: I have made several short films in the past, but all of them have been live-action. The Eye: Calanthek is my first animated short, and I couldn’t have done it without using Unreal Engine. In the past, I have attempted animated shorts using other software, but I always gave up because it was far too much work. I lost interest and my creative flow faded quickly because of how labor-intensive it always seemed, not to mention the many, many steps and other people I needed to help.

Prior to this short, I was doing lots of previs on several other of my projects for live-action films, and realized that using Unreal was much more preferable than other software products. I thought, well, why not do a fully animated short in Unreal? I felt confident that I could do it, and knew I could even handle the bulk of the work if need be, and I was excited to attempt it. It really satisfied my creative drive, writing, designing, storyboarding, editing —all in-Engine. I really believe this is a very different process of filmmaking as compared to anything I’ve done previously, and different from the norm, but I have to say that I can’t see myself going back to the conventional way of making films. This process may not be for everyone, but it is definitely a wonderful process for me. 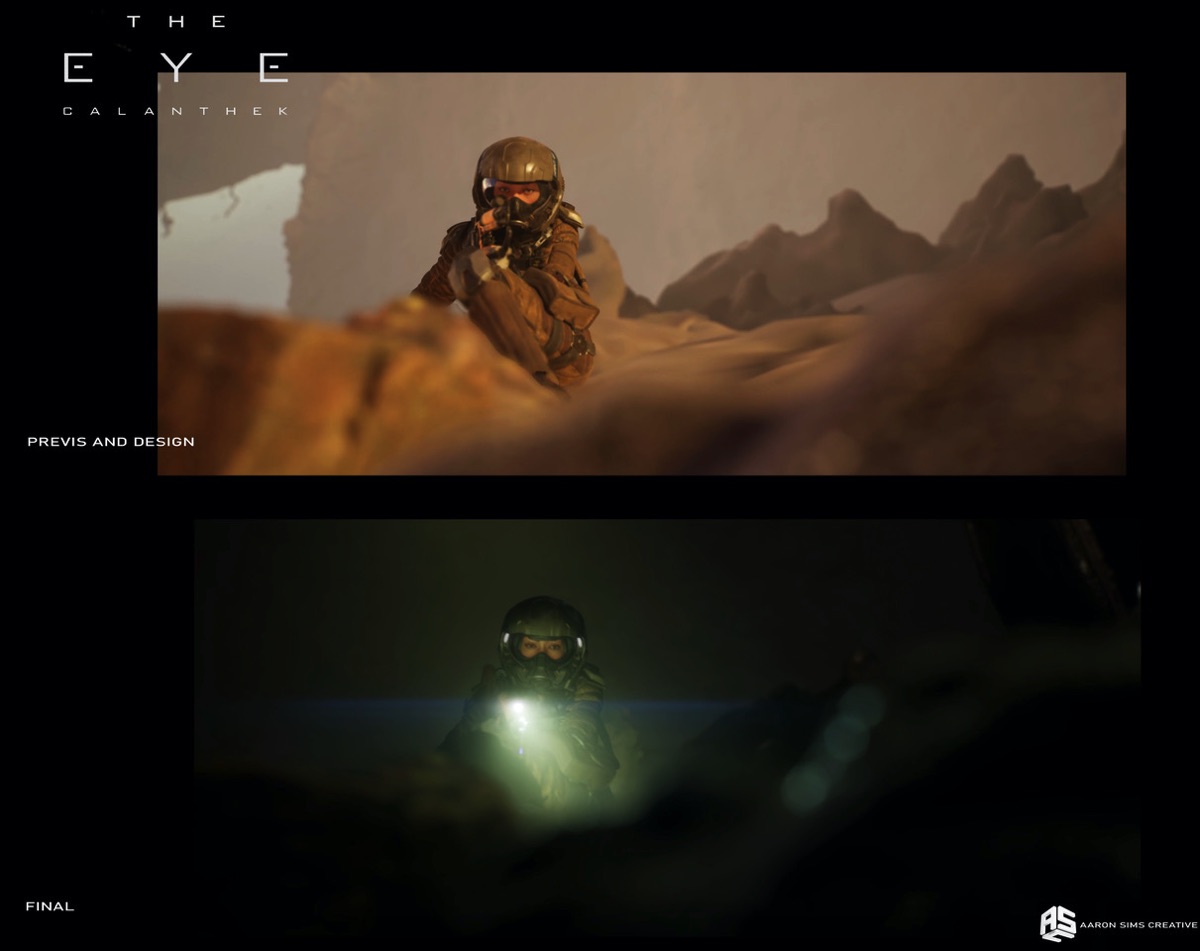 One Reply to “How Aaron Sims Creative made ‘The Eye: Calanthek’ in UE5 in six weeks”