Behind REALTIME’s visual effects on ‘The Watch’.

The Watch is a BBC America series inspired by the Ankh-Morpork City Watch from the Discworld series of fantasy novels by Terry Pratchett. In the final episode, the main characters orchestrate a concert designed to soothe the ‘Noble Dragon’ which threatens to destroy the city. A tiny dragon called Goodboy flies to meet the massive other dragon, and they happen to fall in love.

The team at REALTIME was behind the CG dragons, and this latest #shotmakers breakdown at befores & afters dives into the work on that finale sequence, which included creature build and animation and significant FX smoke and fire. Several members of the VFX crew weigh in.

b&a: During the concert, how did the characters mime interacting with Goodboy before sending him off?

Sue Land (VFX supervisor): Our CG Goodboy had a physical ‘stand in’ on set. He was approximately the same colour and size (actually his tail is a bit longer than CG Goodboy) but had no articulation. He was used by the cast to rehearse with and also as a reference for us, informing us on things like light and shadow interaction. Once the actor was familiar with the action, another take was done without the prop. 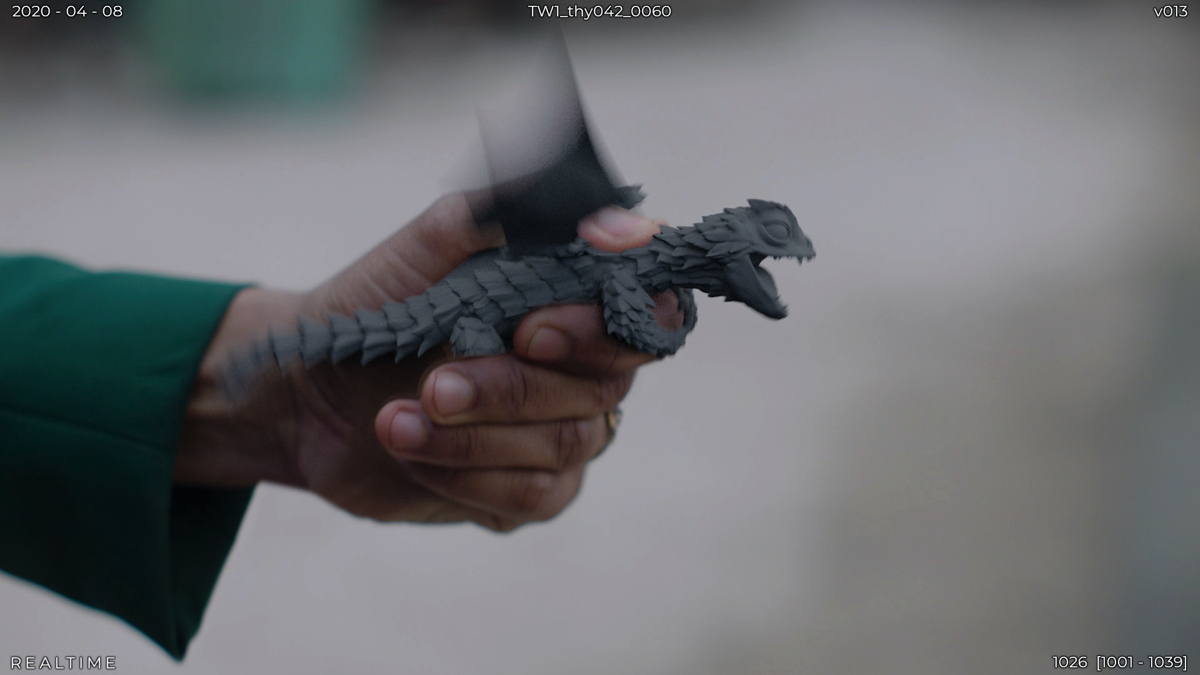 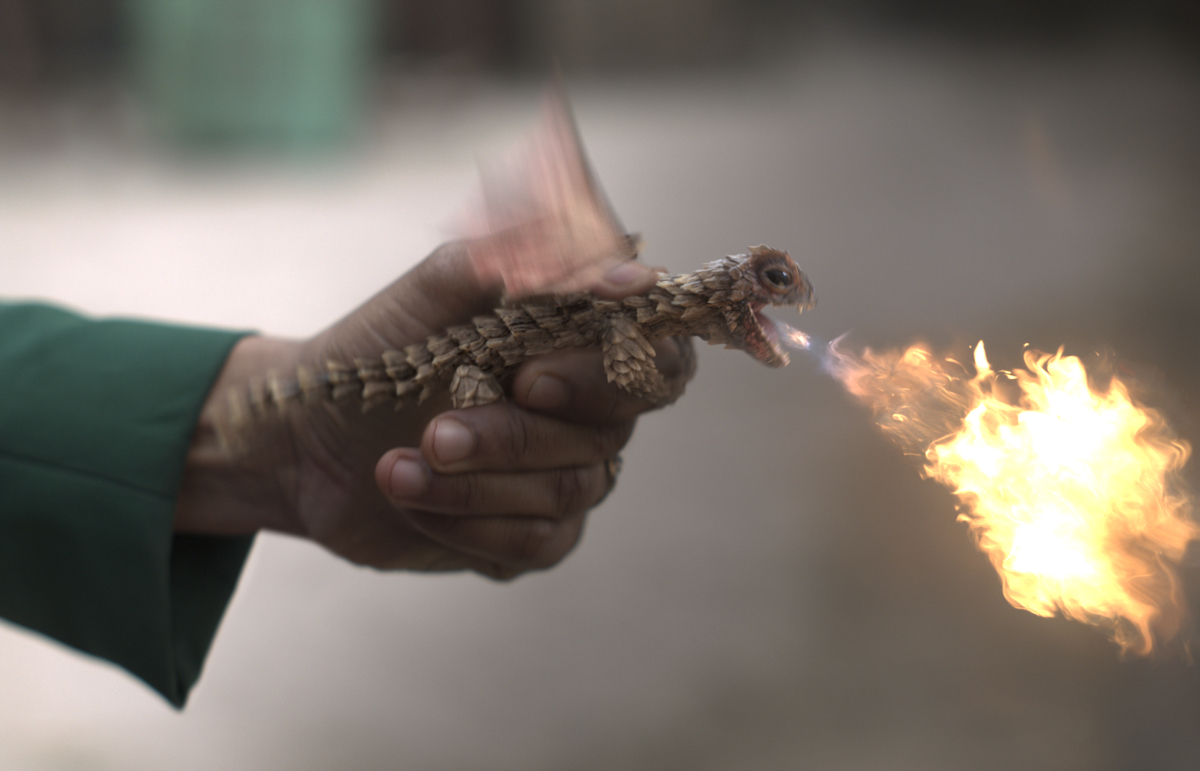 On occasions, the decision was taken to use the reference take and digitally remove the prop Goodboy particularly when the shot was tight and the small muscle movements of the actor’s hand when she pressed the prop were impossible to replicate without him there.

When required Goodboy, like all good Dragons, can breathe fire. This was achieved with a combination of a practical handheld flame thrower, which the actor could use, and digital fire (Houdini). As Goodboy’s mouth is tiny so too are the flames at the point of emission. CG flames filled in the gap between Goodboy and the nozzle of the flame thrower, for safety, as they are several centimetres away from the actor’s hand.

b&a: From an overview point of view, how were the smoke sims tackled for the Noble Dragon?

Graham Collier (lead FX TD): To create the smoke for the Noble dragon, we started with an Alembic of the dragon animation and used this to drive a cloth simulation using Houdini’s Vellum Solver. This was then split into three streams. For the first stream we built VDB volumes from the generated mesh to give the dragon a solid smoke core. 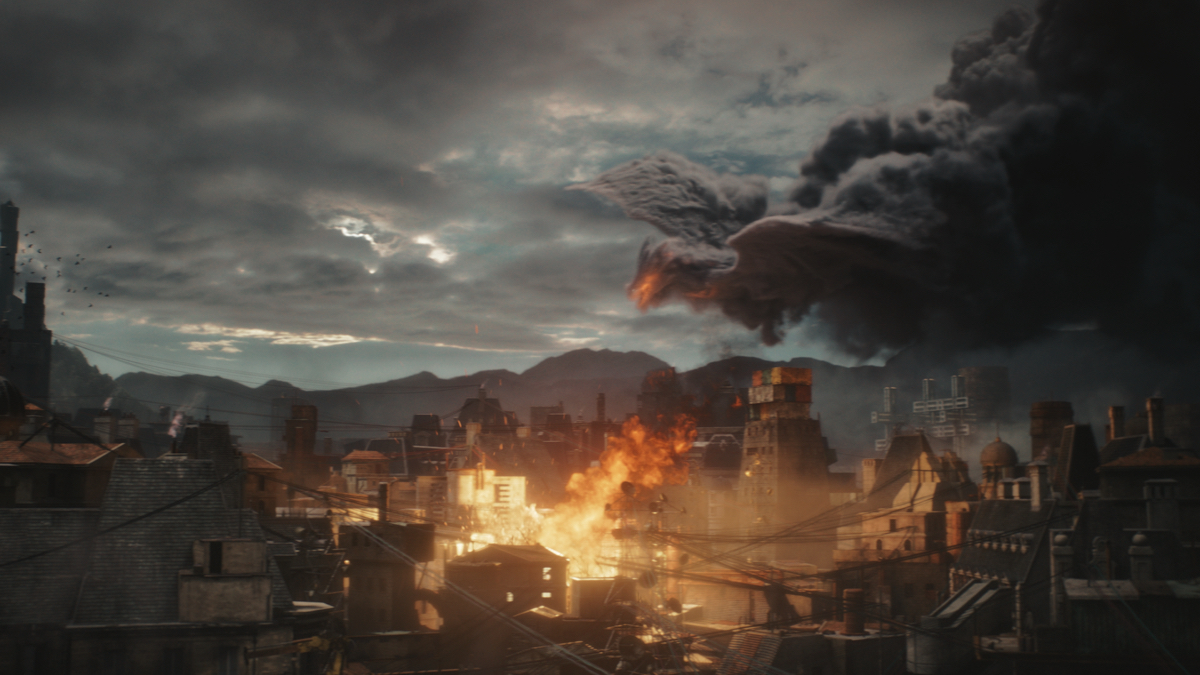 For the second, we scattered points onto the geometry to emit a smoke trail with a long life. This created trails of smoke into the distance, and we blended generic flight cycles into the existing animations to create a Pre-Roll for the simulation trail. We also used several micro solvers with Houdini’s Pyro to add details to the smoke and break up any mushroom shapes.

The third step was to create a high-res sim that had a short life so that it would be contained close to the dragon animation. This was a similar setup to the previous sim, but as it was contained to a smaller area, we could increase the detail significantly. 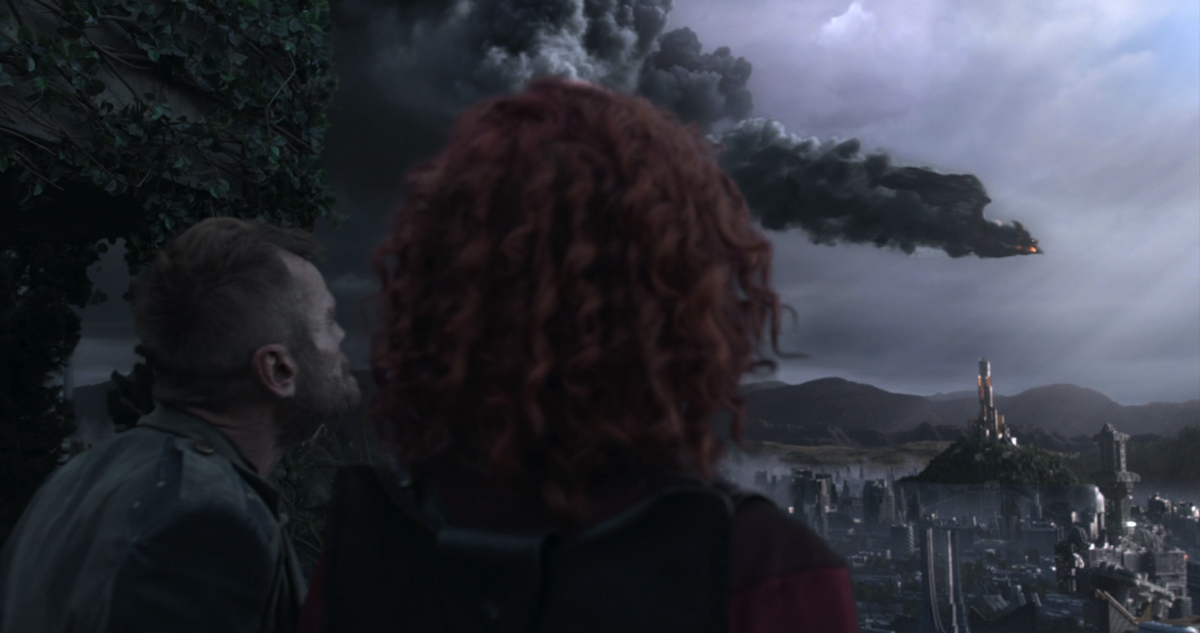 These simulations and VDB volumes were combined as a single render pass. We also generated dynamic lightning inside the smoke so that we could create a flashing silhouette of the dragon inside of it. We rendered edge passes and ambient occlusion of the dragon geometry to add details back in compositing.

b&a: Goodboy has so much ‘personality’ in this scene in the display for the Noble Dragon – what reference in terms of animation did you adopt for these shots?

Stu Bayley (art director): This adaptation of Terry Pratchett’s world has a more contemporary twist, which drove the overall aesthetic of Goodboy. The director wanted him to be a more real-world interpretation of what a dragon could be, so the direction was to focus on using existing lizard anatomy and give it a subtle, fantastical twist. From the script, we knew that Goodboy is a young dragon who is carried around in a pocket and used as a handheld weapon. This influenced our reference search in terms of species of lizard that could be used as a base for the design. 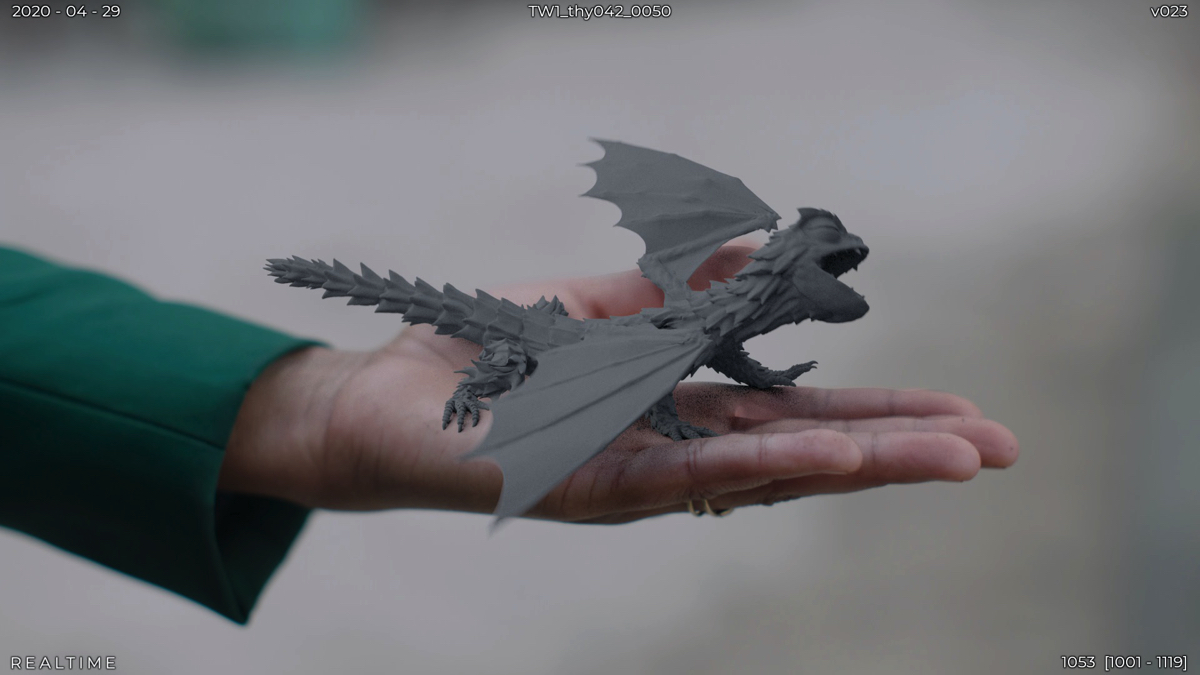 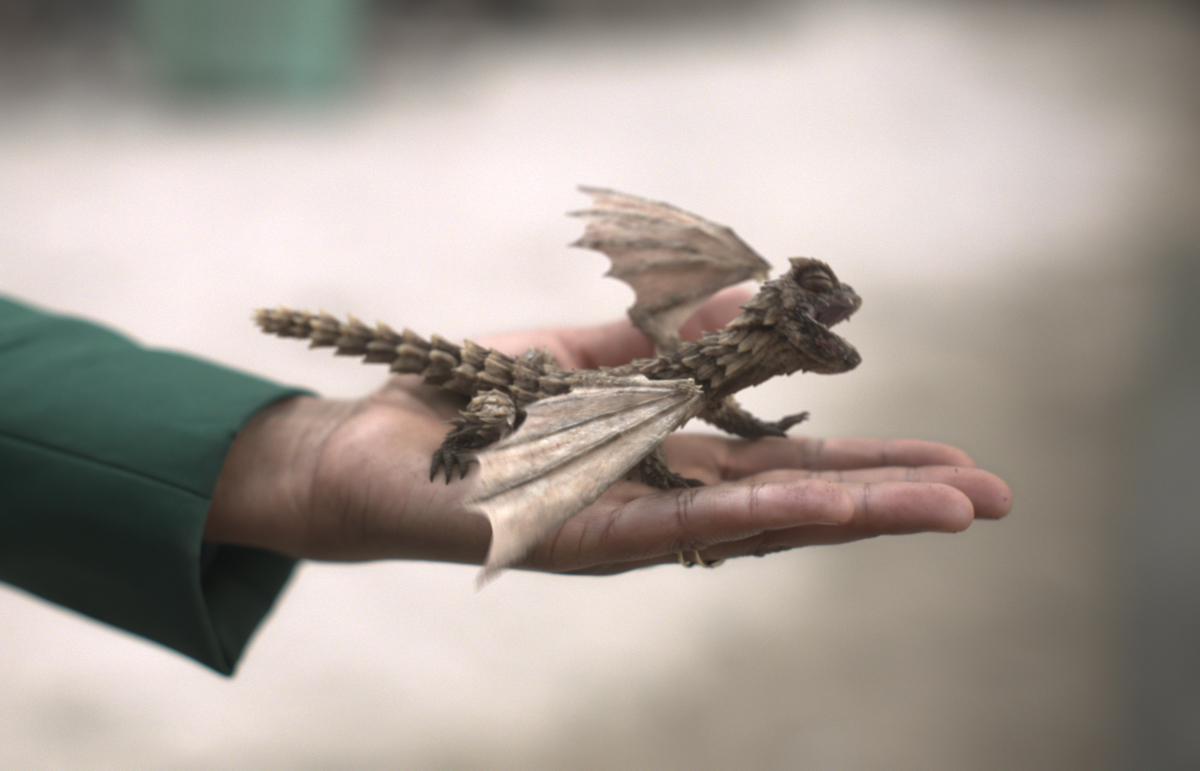 We combined aspects of different species to create unique but plausible iterations as a base, with the addition of established dragon features such as wings. We soon settled on a key species as the base for Goodboy, the armadillo lizard. Its anatomy had some interesting features that aligned with the performance required, the most impressive being it can coil into a ball as a defence mechanism – this made it ideal to fit into a pocket and uncoil when his assistance is required. We knew this could add a real flare to his personality and allow us to portray him as having just been woken up and called in to action against his will, playing on the grumpy teenager vibe of his personality.

One other key aspect to his design is the ability to punch way above his size in terms of fire power. He may be small but packs a punch! We designed the ability for his nostrils to flare to over triple the size to allow him to project a huge stream of flame.

Being a young dragon, the scale of his wings is quite small in relation to his body. This was designed to make his flight unsteady and give the appearance of his inexperience of flying, again to support the narrative of his age and personality. He was great fun to work on and the animators did a great job of bringing him to life.

Nicolas Seck (animation director): We wanted to make Goodboy as appealing as possible by pushing the features of the cutest creatures (big head, big eyes, open mouth with big smile, curious behaviour, clumsiness…). For his general curious attitude, we looked at references of puppies to introduce details like ever-cute head tilts. We also wanted to incorporate the identifiable movement rhythm of lizards; how they can move quickly and then freeze and hold a pose. 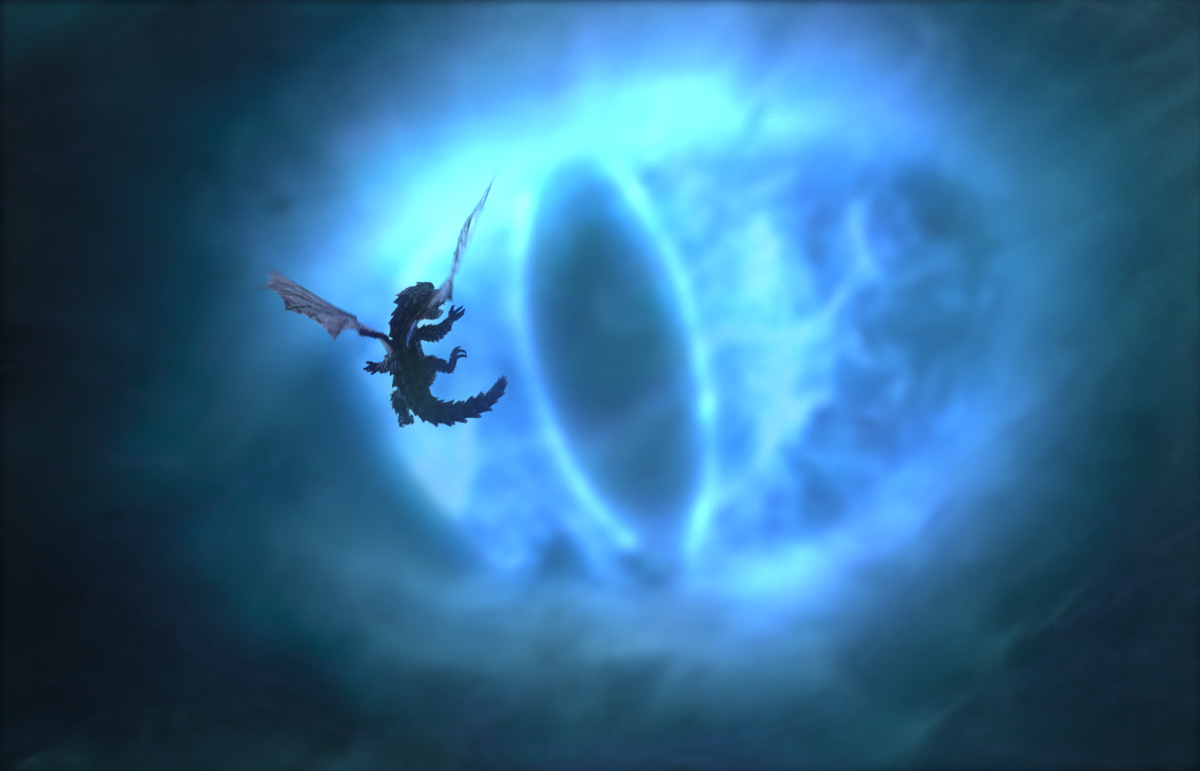 Through the show, Goodboy pushes his boundaries bit by bit, like a child who is learning to develop his skills. He is not very experienced with flying, so when Sybil throws him up into the air it doesn’t come naturally to him. At first, he has a very clumsy flight, but he builds up his confidence, and here we tried to inject real-life inspiration by observing the learning process of baby birds. The idea for his flight was to get the sort of dynamic of a roller coaster in the velocity – some difficult raises followed by fast drops of height with a more controlled trajectory at the final peak.

He is also fond of music and whistles along to the song played in the concert. It was interesting to push his facial shapes to give him this playful and cheeky attitude, to go beyond what was initially intended for him to perform. The difficulty was finding a ‘natural’ way to deform his heavily scaled face – lizards don’t have the face muscles needed to show different expressions, so we had to find a way to work around that.

He then has an even more challenging task to accomplish as he reaches Noble Dragon and performs a mating dance. For this, the director wanted to us to inject the vibe of Lizza Minnelli in Cabaret. This was the ultimate test for his rig and development, as he had to execute a very distinctive style of dance while still flying and trying to seduce Noble Dragon.

As we didn’t have much time to produce it, we worked with an animatic based on my sketches and adjusted it with the director’s comments so that when approved, we could just complete the result in 3D and try to preserve the expressiveness and energy of the animatic. To show him falling in love, we had to suggest some evolution in his flirting process, from cautious to fully seduced.

He was such a nice little creature to animate with a good range of performance – we would definitely like to animate more creatures like him!