The VFX studio also leveraged its extensive primate experience in bringing the season-favorite character to life.

While Weta Digital was working on the zero-G chimpanzee and dog shots for Netflix’s Space Force – the hilarious moment in the series when the outer-space chimp is considered for a mission to re-attach the solar panels of an orbiting satellite – the VFX studio did what it usually does; some bespoke motion capture on their capture stage.

While Weta Digital has had extensive experience tackling primates before for projects such as the Planet of the Apes films, Rampage, and The Umbrella Academy, the task at hand, namely, to realize Marcus the chimp in zero gravity, was something new. Ultimately, the solution was incredibly simple.

It involved a chair with wheels.

“Craig Young, our lead animator who has done a lot of motion capture acting, and I were in this room one day,” shares Weta Digital animation supervisor Aidan Martin. “They had this little roll-y chair that didn’t have a back on it. Craig sat on that and I pushed him around, and he would be acting it out as if he was in zero-G. We were like, ‘Hmm, that might just work.’”

“We ended up taking that chair down to the motion capture stage here and got Craig set up in the suit. I would drag him around the stage so that he could just be ‘floating’. That’s pretty much exactly what we used. There were points where the motion edit team would take the route of the character and add more float to it. But that chair was our very high-tech anti-gravity device.”

Weta Digital’s motion capture served as the body movement for Marcus, but the character’s facial performance did not come from human facial capture translated to a chimpanzee model. Instead, it began based off real chimpanzee reference.

“Usually we do have that anthropomorphic part of it in our primate work,” states Weta Digital visual effects supervisor Chris White. “And, in fact, we had started that way on Marcus. But then we talked to Greg Daniels, the show’s creator, and he said, ‘No, really, it’s just a regular chimp.’”

Weta Digital did, however, turn to Daniels for some video reference for Marcus, what Martin describes as a ‘blocking pass’ of the performance that was intended as a leaping-off point.

“But every pass we did we always came back to it,” the animation supervisor notes. “It was the only thing that really hit all the beats. In the end, we really stuck to Greg’s acting, mixing that into our actual chimp reference. We weren’t doing any tracking or any dot tracking on faces, or any facial solves. This was all hand-keyed.” 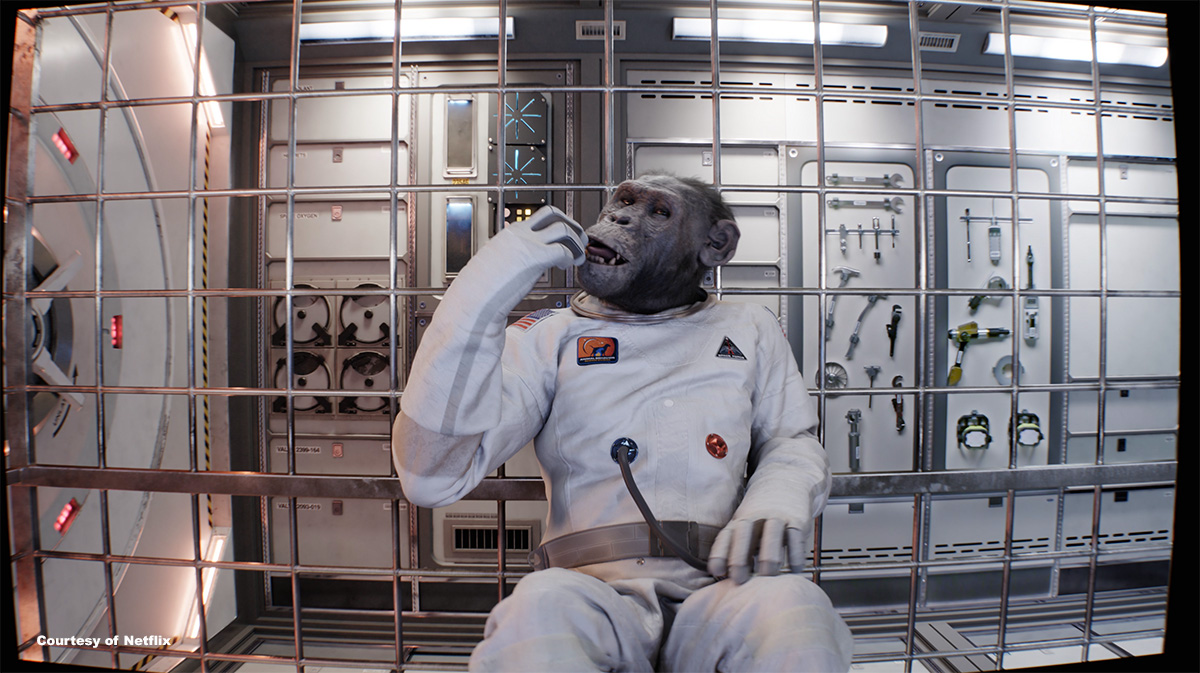 The sequence also includes some particularly close-up shots of Marcus’ face via several head-cam perspectives (the number of which were increased from around five to 25 mid-production – “I think Greg really liked them,” observes White). The challenge in those moments was to come up with a suitable viewing angle that also helped sell the humor in the scene.

“The thing that we went back and forth on was, ‘How magical is this camera?’ recalls Martin, noting that the team called the viewpoint the ‘Iron Man-cam’. “We actually did do tests where we had the glass of the visor in there, which looked kind of cool because you could see the environment reflecting.”

“There was a bit of debate on their side,” continues White. “Would the audience buy this magic camera where you actually see reflections? It ended up without having the glass.”

An overall animation challenge for Weta Digital for the Marcus shots came in selling the comedy of the performance. The chimpanzee is not performing comically, but his sign-language and body movements appear to show to the Space Force team on Earth – led by General Mark R. Naird (Steve Carrell) – that the animal understands what to do to fix the satellite.

“Greg was pushing us to make sure the audience recognizes that Marcus isn’t actually getting it at all,” says White, despite the proliferation of sign language and response, and the fact he actually does make it to the satellite.

Adds Martin: “Naird thinks that he’s breaking through and Marcus understands. You think that he’s getting it, but really Marcus is just looking at the next shiny thing.”

When Marcus ultimately fails the mission, Naird considers the dog, Theodore, but it turns out that it has been eaten – by Marcus. The joke is illustrated by a hovering tail. Weta Digital creative VFX art director Gino Acevedo made a practical dog tail to work out how to stage the comical beat without it being too gory on screen.

“Gino painted up this little tail, we looked at that and modeled the end of it, just to help sell the gag,” details White. “Then Aidan had to figure out how it turns and reveals itself at just the right time.”

Another funny moment is seen in earlier file footage of Theodore and Marcus in zero-G as the dog ‘catches’ a bone toy while spinning. This started with previs animation done by Martin.

“It was the very first shot that we sent them for previs,” he says. “And then we had our animator do several versions of the dog for the final shot; spinning and catching the bone. They were all so amazing. But every time we sent it, Greg would just say, ‘No, I like the previs.’”

“You know, there’s something about the first sketch that people always like,” laughs White.