So, what was the first version you used?

Nuke – the popular digital compositing tool – began life at VFX studio Digital Domain in 1993, before being productized by Foundry in 2007. Along the way, there have been several major developments with the tool, including deep compositing and, more recently, Smart Vectors.

With Nuke 12.0 released last year and 12.1 just getting out there now, I asked Digital Domain and Foundry to help me look back at the history of Nuke in a visual way. Check out the timeline, below, where you can reminisce about all things that weren’t in the tool for a long time and now are, and discover when certain features were added.

I would note there have been a number of crucial contributors to Nuke over the years and I have not tried to list these people since I would no doubt leave some of them out.

Note: for good background information on Nuke, I would highly recommend Nukepedia and fxguide, which have provided extensive coverage of the software for many years.

Nuke (meaning ‘New compositor’) began development in 1993 by Phil Beffrey and later Bill Spitzak at Digital Domain, where it was employed for internal use. At first, it was a command line run tool. In this Nukepedia interview, Spitzak mentions that version one of Nuke used “fixed-sized buffers and a command line. But it could do transforms and blur and sharpen filters and color corrections, and composites.”

A GUI was introduced in version 2 of Nuke (which hit around 1994), which was built with an in-house GUI toolkit at Digital Domain called FLTK. Then, Nuke received an architectural re-design, which heralded the development of the famous 3D system inside the software. 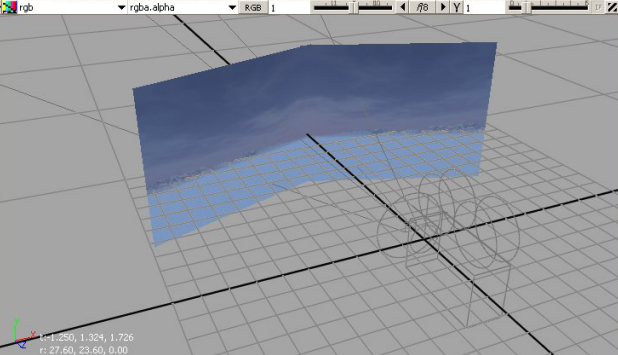 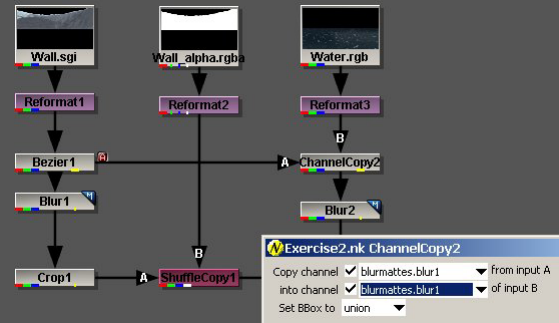 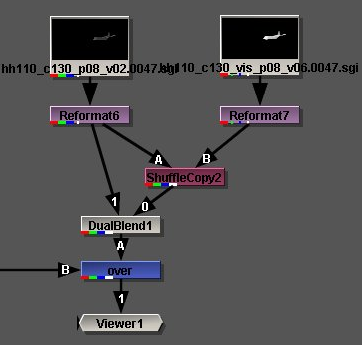 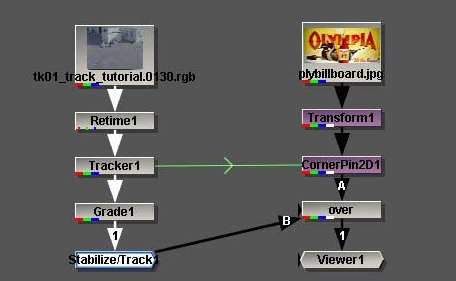 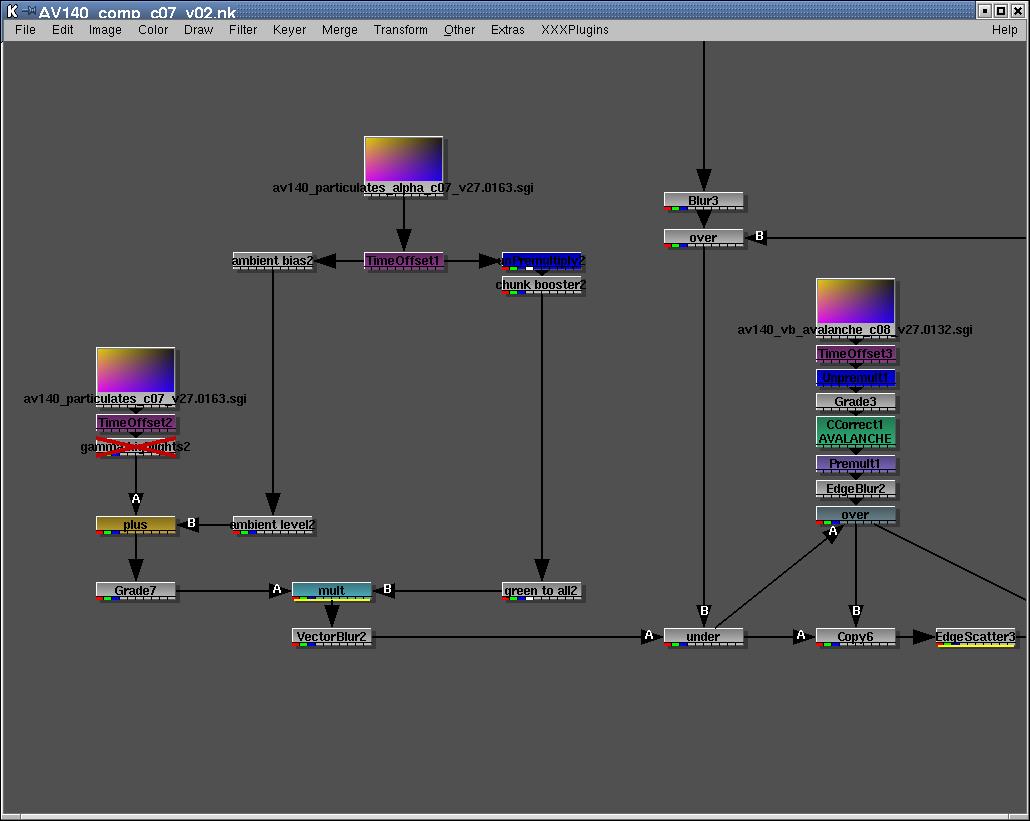 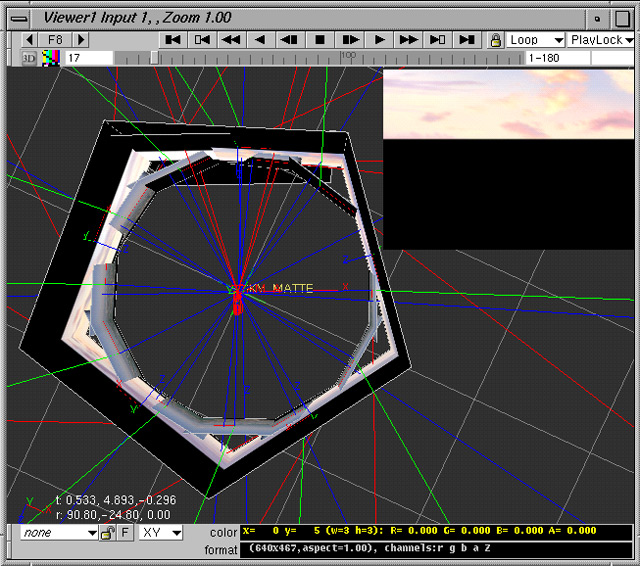 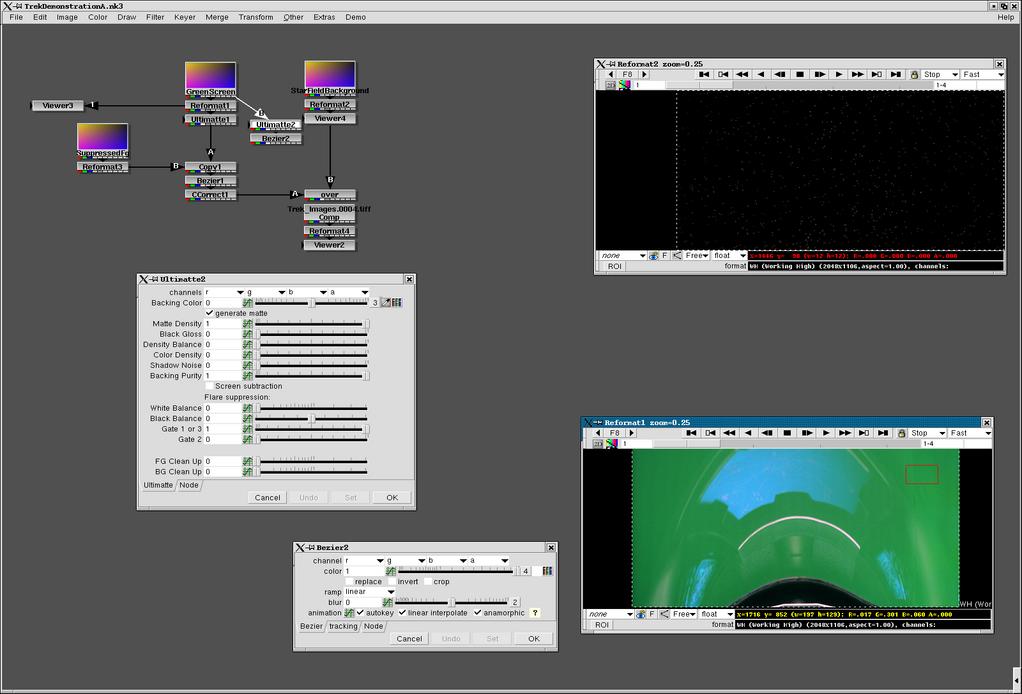 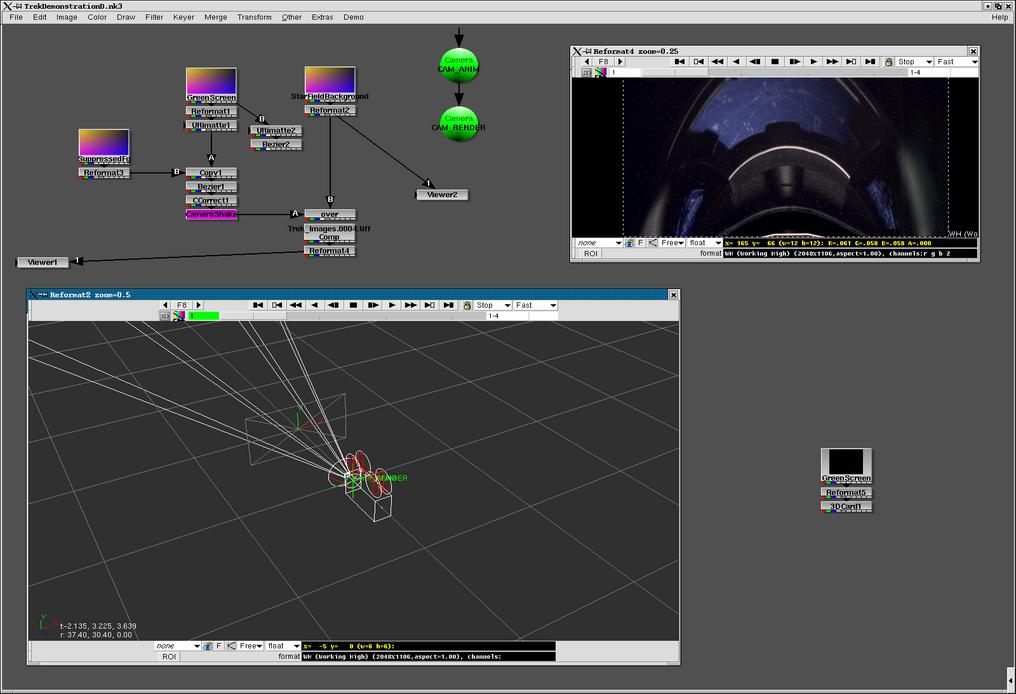 In 2002, Nuke was recognized with an Academy Award for Scientific and Technical achievement (Academy Plaque) awarded to Bill Spitzak, Paul Van Camp, Jonathan Egstad, and Price Pethel. That same year, Digital Domain started D2 Software with the aim of developing and selling Nuke and other software; it meant, of course, that Nuke became available to the public.

A major change took place when Foundry (then, The Foundry) productized Nuke in 2007. They released Nuke version 4.7 mid-year. 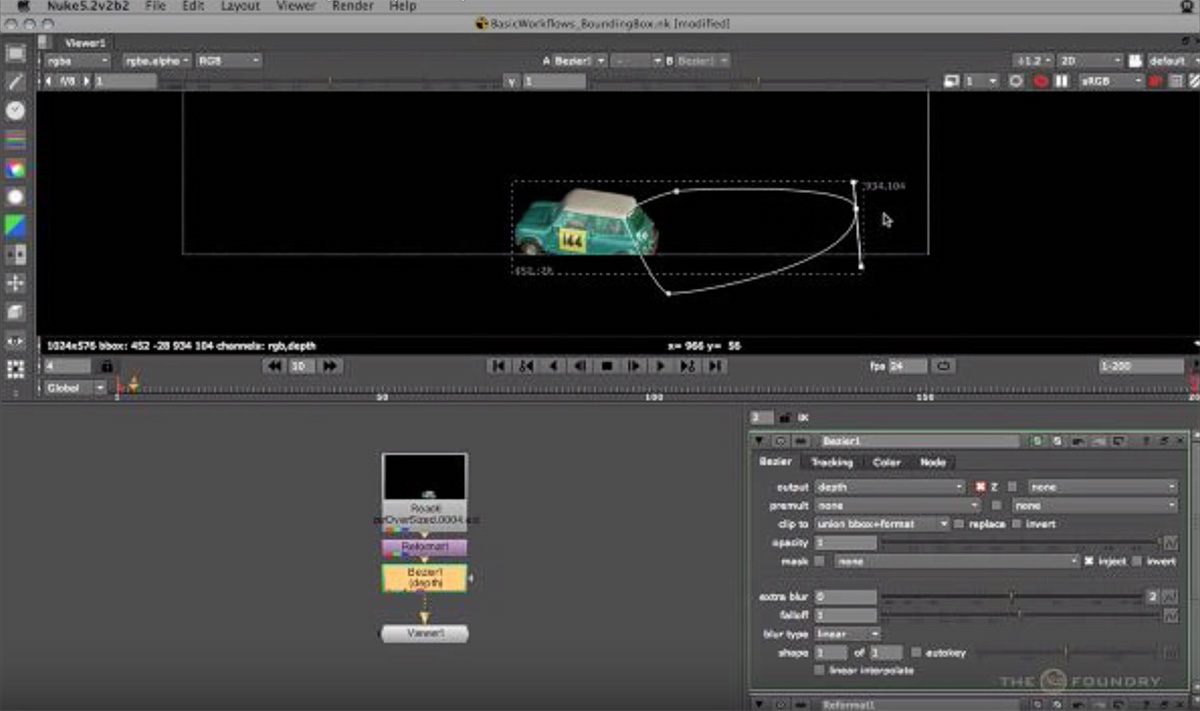 The first major Foundry version of Nuke came in 2008 with 5.0, which saw the addition of Python for scripting, support for stereoscopic workflows, the ability to read, process and write more than 1000 channels per stream and support for EXR images. Other features included per-node mask inputs and expanded LUT support for file I/O color-space conversion. Nuke 5.2, in particular, added SDI out. 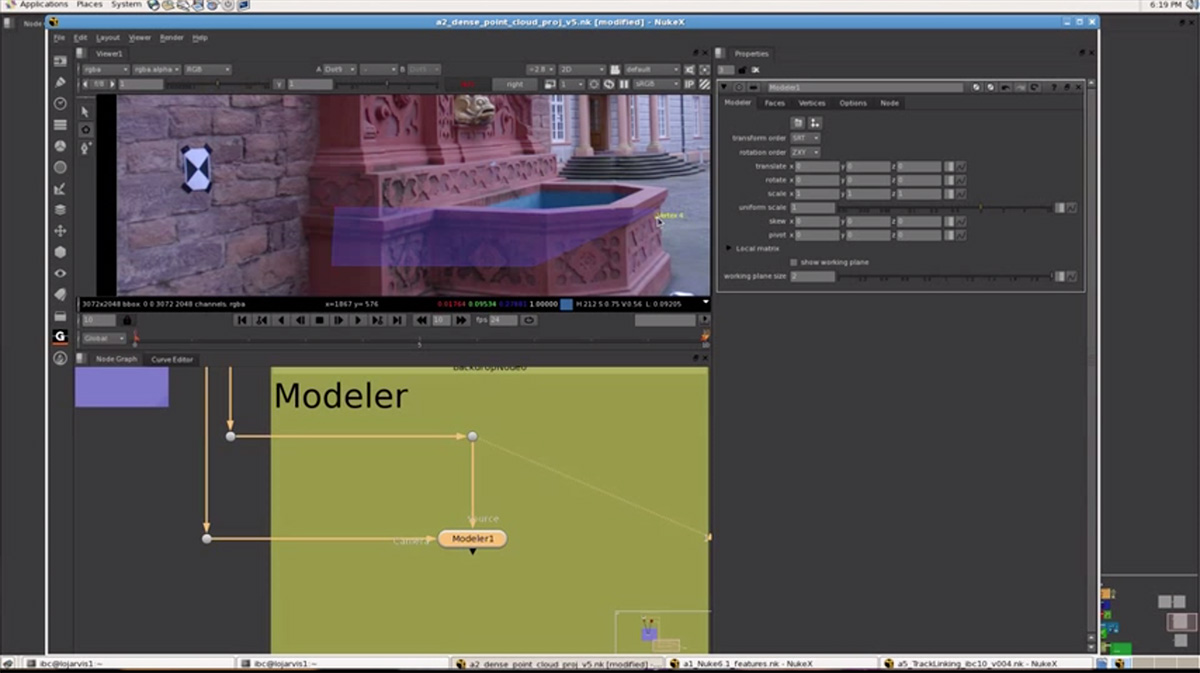 Foundry also introduced NukeX 6.0 around this time, which had a bunch of extended tools such as an integrated 3D camera tracker, automated and manual lens distortion tools, FurnaceCore – Foundry’s re-engineered set of Furnace plug-ins – and a DepthGenerator plug-in. 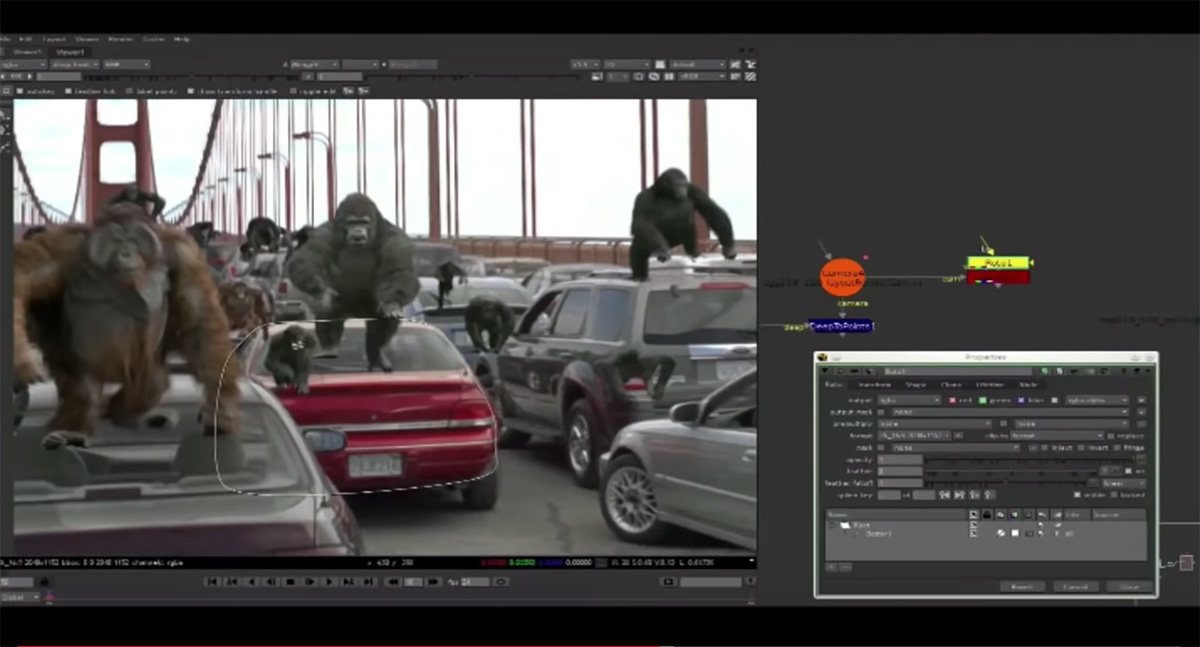 Nuke 6.3 introduced Deep Compositing and the Particle System in NukeX. New SplineWarp and GridWarp nodes were included in Nuke, with Denoise and PlanarTracker nodes available in NukeX. Node presets were aimed at making workflows in Nuke easier, and there were also updates to caching and OCIO nodes. 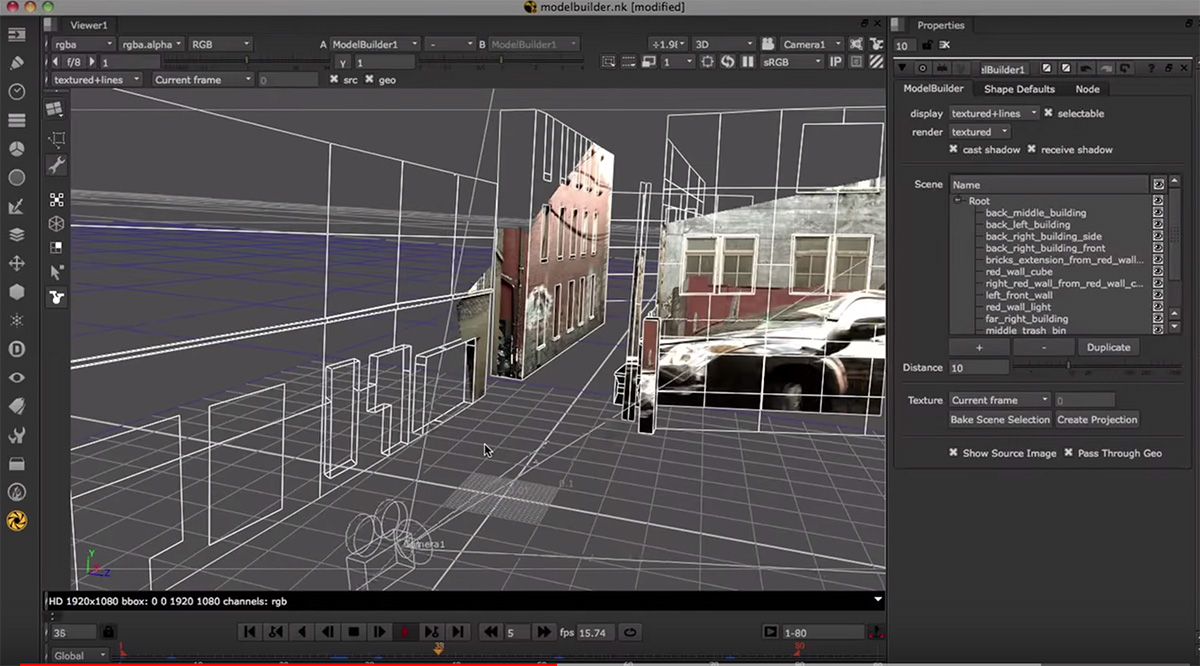 The roto tools in NUKE were redefined here, and more stereo support offered. Features like ZDefocus, NukeAssist and DepthToPoints and DepthToPosition were introduced, as well as deep data and Alembic support: OpenEXR 2.0 Deep data and geometry read and write capability to and from Alembic file format. 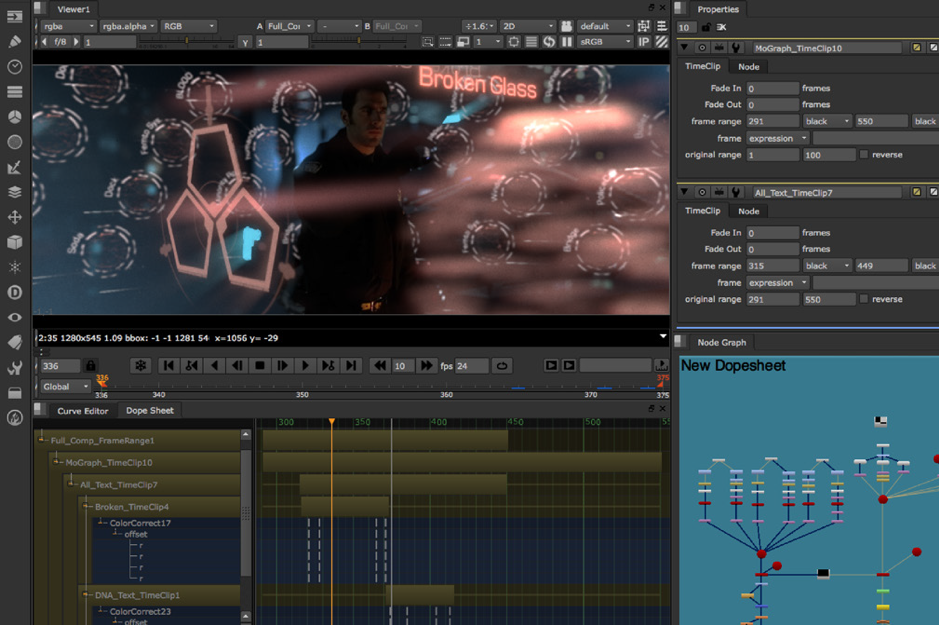 In 2013, Nuke 8 brought a new Text node into the mix. Meanwhile, Nuke 8’s Dope Sheet was enhanced. The in-panel color wheel in Nuke 8 updated the existing color knobs. The new Pixel Analyser provided access to a variety of image color values through in-viewer scrubbing or region box selection tools. Scopes were a new addition to Nuke 8 – it gave artists access to detailed levels of color data on images displayed in the viewer. The new Match Grade node in NukeX 8 offered automatic modification of the color histogram of an image to match a reference for grading. 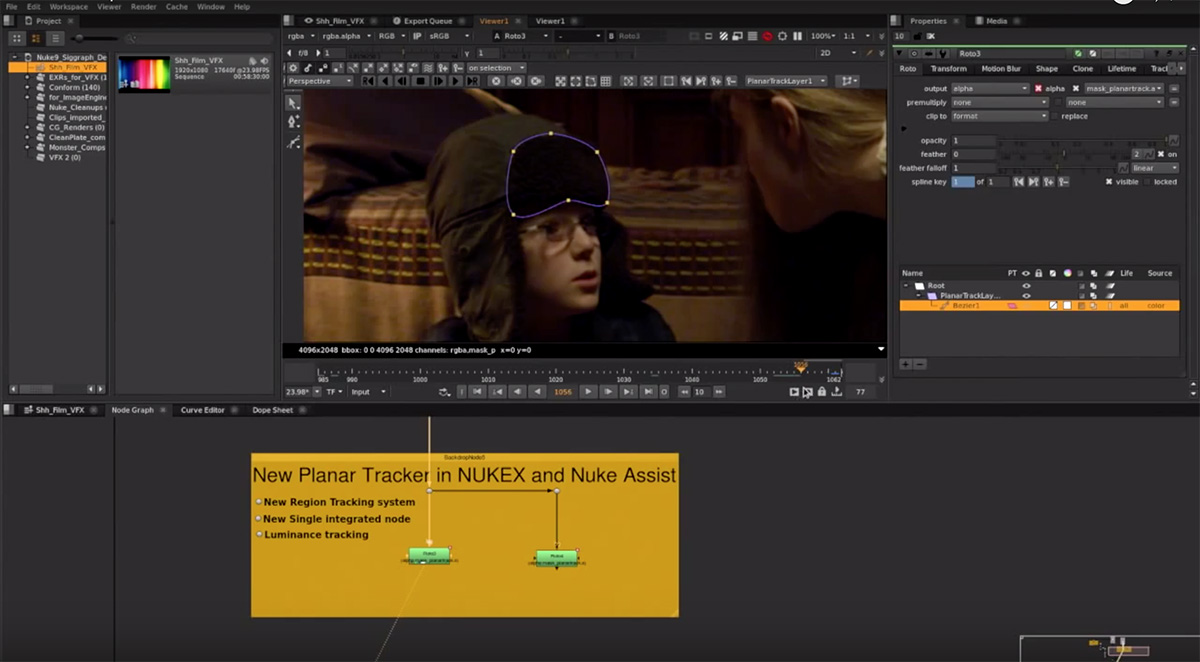 With Nuke 9 – in 2016 – came Nuke Studio and the merge of Hiero. It also saw the release of Nuke Non-commercial; this was a free, functionally restricted, version of Nuke, NukeX and Nuke Studio for learning and personal projects. Nuke Studio offered access to Nuke in a timeline environment.

New or update features included Kronos, VectorGenerator and MotionBlur improvements based on Ocular (the stereo workflow tool) technology. Other changes: OFlow node improvements and Denoise available in Nuke rather than NukeX, PlanarTracker integrated into Roto and RotoPaint nodes. 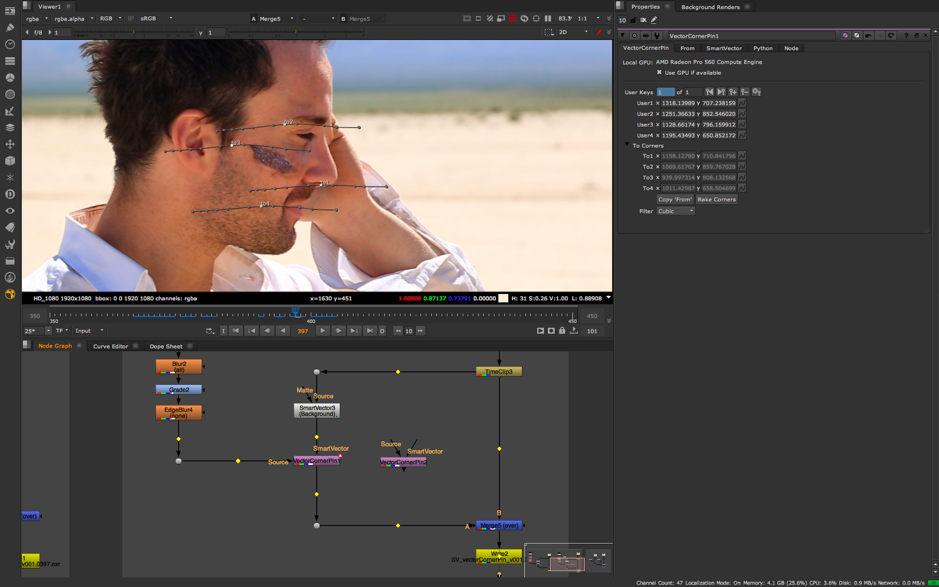 Foundry also moved onto Nuke 10 in 2016, which included three significant features. The first was the RayRender node, which added ray tracing to Nuke. Then there was the ChromaKeyer node that provided GPU-powered quick keys and color correction. Finally, this release included the Smart Vector Toolset in NukeX and Nuke Studio, which added the ability to track images onto complex moving surfaces.

‘Smart Vectors’ let artists add textures or paint to image sequences that contain contain complex motion or subtle detail. With it, they can generate high-quality motion vectors and use them to automatically push or warp an input image sequence across a range of frames. 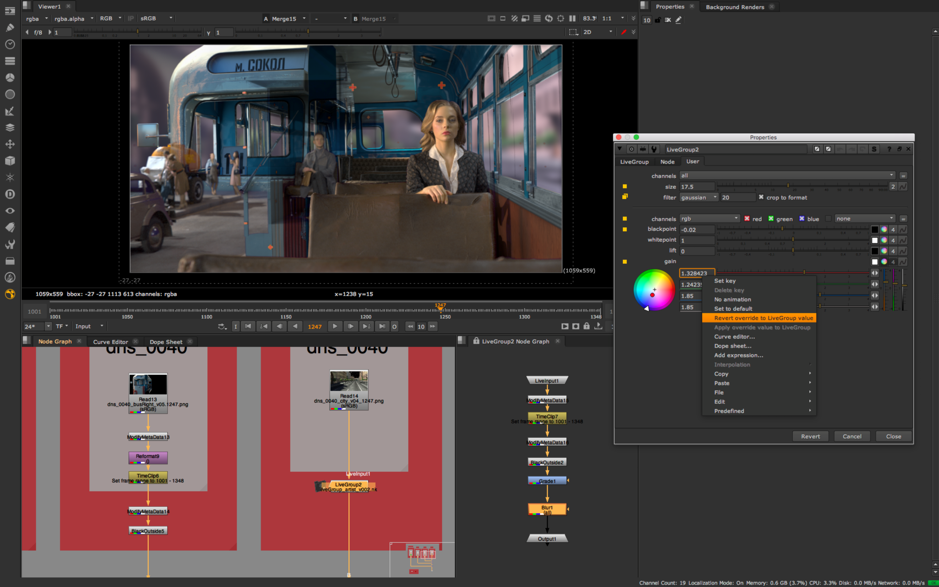 2017 saw Nuke 11 introduce workflows such as LiveGroups, which are container nodes that can be used in conjunction with LiveInput nodes so that multiple artists can work on different parts of the same shot as separate scripts, without the need for rendering.

The UI was updated to provide for a new editing mode feature that allowed artists to customize and create gizmos by dragging and dropping knobs from existing nodes or a knob menu. Other updates were made to Smart Vectors, Vector Corner Pin workflows and Denoise and LensDistortion nodes. 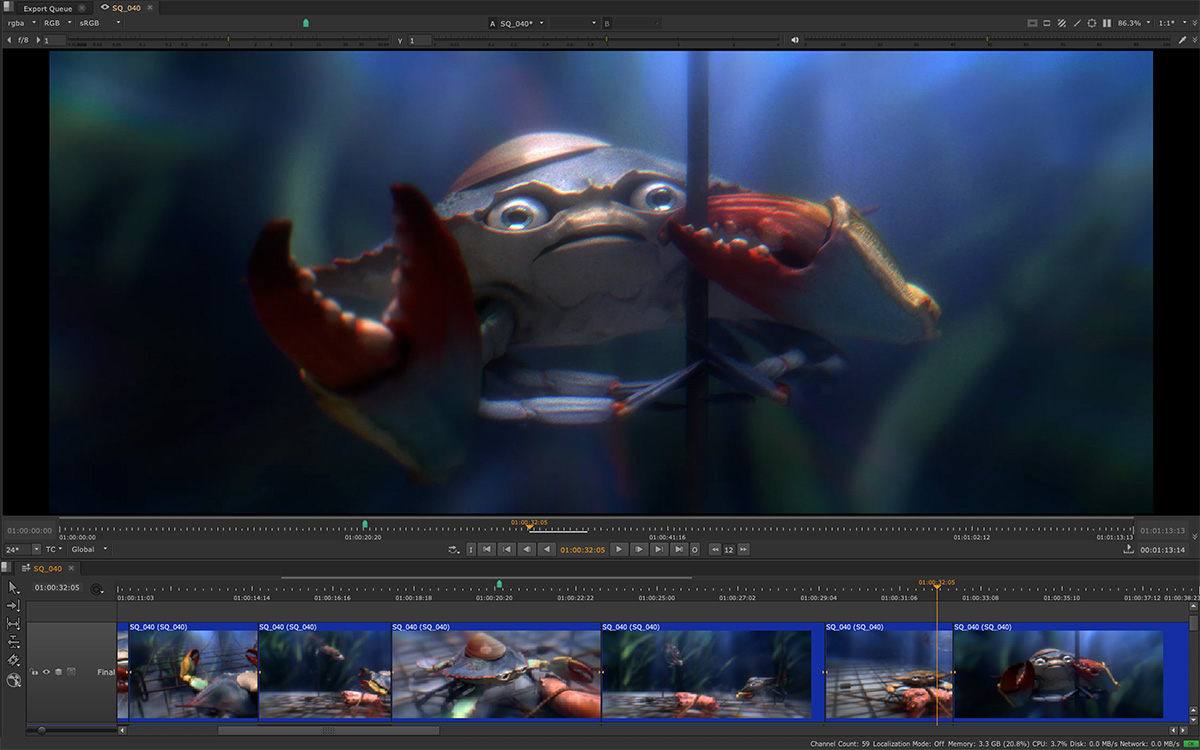 In 2019, Foundry released Nuke 12, and with it additional GPU enabled nodes (Edge Extend and Inpaint), a rebuilt playback engine in Nuke Studio and Hiero, and the integration of GPU-accelerated tools integrated from Cara VR for camera solving, stitching and corrections. Also, some core performance improvements were aimed at making the user experience smoother and interactive when working with a large number of nodes.

More details on the new release can be found at Foundry’s website and in the video, below.

6 Replies to “A visual history of Nuke”