The VFX supe is being recognized at the upcoming VES Awards

At the VES Awards in Los Angeles in late January, one of those to be honored at the event will be visual effects supervisor Sheena Duggal.

Duggal will receive the VES Award for Creative Excellence at the Awards in recognition of her valuable contributions to filmed entertainment.

Right now, the visual effects supervisor is overseeing VFX duties on Venom 2. She has had an acclaimed career involving such projects as Contact, The Hunger Games, Agent Carter and Venom.

A few years ago I was able to ask Duggal specifically about her work at Sony Pictures Imageworks as a high-speed compositor on Contact which involved both the ‘Wow-moment’ mirror shot and the virtual environment beach encounter Jodie Foster’s character has with her father.

With the VES Awards approaching, I thought I would re-publish those pieces from vfxblog. Here they are below – the work still blows me away (in fact, I think the mirror shot is often cited as one of the most favorite and influential by many VFX supervisors).

Sheena Duggal: This shot is an entirely 2d shot composited on Flame.

It is basically 3 plates:

A) Ellie running in front of a steady cam operator who is running backwards with a focus puller that we had to remove for the entire shot, (not easy back in 1996 to track and patch a moving shot like that).

B) A bathroom cabinet with a blue screen where the mirror should be, Ellie reaching for the knob and opening the door.

C) A reflection plate of the bathroom. 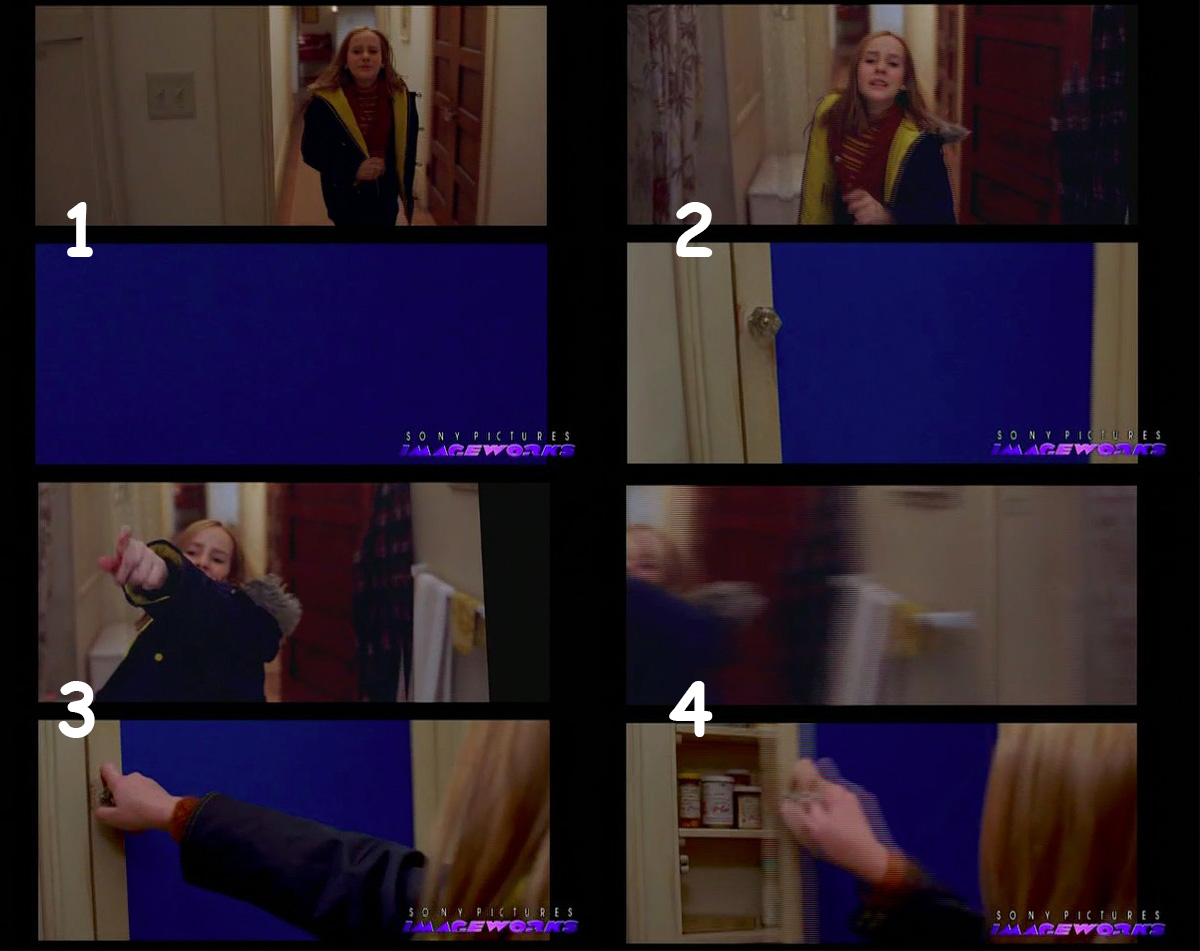 The shot starts on the A plate of Ellie running up the stairs and down the hallway towards camera and as she got closer to where we wanted the bathroom cabinet to be she reached out her hand and grabbed a none existent door handle.

We tracked this plate into the B plate for the reflection in the mirror as the cabinet door opens, the tricky part was to align the fingers in the reflection with the A plate hand. We had to reconstruct the fingers to get the alignment and to sell the shot.

The final part of the shot was to add C plate the room plate reflection as the cabinet door swings open. We used a few comp tricks to create the beveled edge and seamless comp.

When I spoke on Contact at the Academy bake-off, I remember people being amazed that this was actually so simple because it employs what feels like a lot of visual trickery. I am delighted how well this shot has stood the test of time and proud of the talented team of people who helped to create it.

In the original vfxblog article, I also spoke with Contact VFX supervisor Ken Ralston, who revealed that the Ellie and father sequence was actually one in which they had explored possibly doing a frozen moment/bullet time effect.

The beach scene (and why it had to be done twice)

Sheena Duggal: It was quite a groundbreaking sequence. Jodie and her dad were totally shot on a 360 bluescreen, I think maybe the first time that was ever done. Then the plates of Fiji were pan and tiles and the sky was a CG render. These we projected onto a dome to create the virtual environment and then we would render a BG plate from this that matched the BS shot camera and take this into Flame and composite it. I feel like it was ground breaking at the time – no-one was doing this kind of virtual environment work.

The big long shot where she comes out of the eye and lands on the island was supposed to be rendered in Cineon and it failed a few days before the premier, so I created a low res version of the shot, with ropey keys and mattes, for the premiere and then did about 36 hrs straight to comp the actual shot for the prints that went out to the theaters. I think that some of the temp version went out into the world as well.

I think it failed to be able to render because it was a long shot, so they brought it to Flame and I spilt it over 3 machines and would create each setup. It was a multitude of steps to create this look, remember before batch or anything like that, all foreground rendering, so I would create a step, share the setup with the artists in the 2 other rooms, run and check it looked right and then do the next step in the comp. It wasn’t just compositing, it was creating this look that was beautiful, dreamlike and heavenly. I spent a few weeks working on looks for Bob to choose from before we got here and pretty much everyone else had tried, so by the time it got to Flame as the solution we were 5 weeks out and there were a lot of shots to be done in that time.

Flame saved the day, it was certainly the hardest thing I never nearly did pull off. Jerome Chen will tell you, about 30 hrs into it I was sitting there just saying what if I can’t do it? What happens then?

It was also a nightmare to track with the 360 camera move in Flame, wow, really amazing what we pulled off for the time, I really have to say discreet helped a lot adding things to the software for us and I used Sapphire sparks to help create the look.

It’s basically a filter that applies a stocking net look to the image to create an overall diffusion, a technique that bloomed the highlights, keys on her eyes to make them pop, faked DOF, multiple selective colour corrections and cascading keys. Bear in mind each step had to be done one at a time, no batch, no selective or combined keyed functions, only one way to create a key, basic tracking software. It required a lot of imagination and faith and hand work, I would create a single frame that looked good, write down all the steps and then try to recreate it across the seq.

Coming up with the look for her father and the look when she touches the edge of the environment was also challenging, mostly created using displacement maps. I wasn’t ever really happy with his look but I ran out of time to figure out something more sophisticated that I could do in 2d.

A lot of the functionality that later appeared in Flame came from the things we learned from having to do all these tasks manually, we had a team of Discreet R&D people come and stay with us for weeks to observe that challenges we were describing. I’m just super proud of this one mostly because we pulled a rabbit out of a hat and it stands the test of time quite well.

The 18th Annual VES Awards take place at the Beverly Hilton Hotel on January 29th. Along with Sheena Duggal’s recognition and the various VES Awards, the Visual Effects Society will also present their Visionary Award to Roland Emmerich and their Lifetime Achievement Award to Martin Scorsese.