How ‘Jumanji: The Next Level’s’ dune buggy desert chase was made

At one point in Jake Kasdan’s Jumanji: The Next Level, the film’s heroes encounter a single ostrich in the desert who then comes back with an entire flock. The team makes their escape in dune buggies in a thrilling chase sequence.

Under production visual effects supervisor Mark Breakspear, Sony Pictures Imageworks delivered CG ostriches and a range of other effects for the scene, which would ultimately involve feathers, sand and ostrich crowds.

befores & afters breaks down, step-by-step, the process for making some particularly aggressive birds.

1. ‘The ostriches chase them around the desert’

Both Proof and The Third Floor handled previs for the ostrich chase. A lot of the action had to be imagined at this stage, according to Breakspear. “We had a script, and it said something along the lines of, ‘The ostriches chase them around the desert…’. That got fleshed out and we started talking about cool things that could happen, say, maybe it jumps a gorge, things like that.”

A bluescreen shoot was the first live-action element to be tackled. This was done in Hawaii with the actors on dune buggy motion bases against an outdoor bluescreen. Breakspear says that normally this kind of shoot would have been informed by principal photography in the desert, but had to be done early due to scheduling requirements. “The actors brought their own thing to it. We’d scripted some stuff for them to say, but then they would react based on what was going on.”

For the shoot, production had printed out full-scale ostriches to test relative scales. Then a few different stand-in elements were built; foam sticks, painted poles and a 3D-printed model of the ostrich head. “On the day, if we needed an eye-line, we put the printed head on top of a pole,” details Breakspear. “If somebody needed to be looking at an ostrich, someone could be standing in a bluescreen suit off to the side and they could hold that pole and we would be able to say, there’s the eyeline.”

Second unit plates were captured in Glamis in Southern California – this included wide angles or helicopter shots. First unit then filmed later with the actors also in Glamis for dialogue scenes or moments where the characters might jump out of an over-turned buggy, but not any driving scenes. 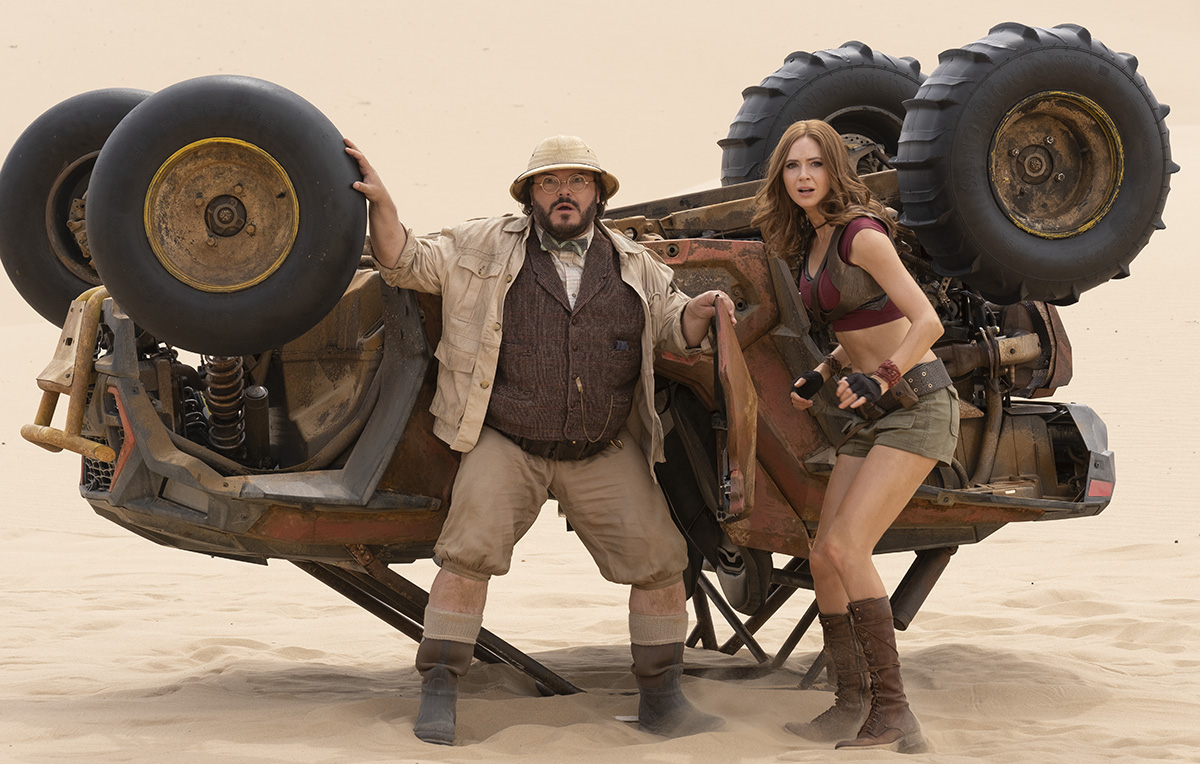 Weta Workshop was engaged to help design the look of an ostrich, which was more of a blend between an ostrich and a cassowary. “There was always a lot of worry about whether people were going to think this was some sort of dinosaur as opposed to an ostrich,” notes Breakspear. “But when we got the bird feathers and everything looking right, it did look pretty accurate. We designed it so that we could change the scale of the head as needed and so we could change it out completely if there was some sort of audience reaction, like, ‘What’s that dinosaur there that’s chasing them?’ Every animal in Jumanji is maybe 20 to 30% more than in real life.”

Breakspear points out that in most birds you don’t actually tend to see the feathers, but in the case of the ostriches they’re running around, and the aggressive use of their bodies meant that the feathers were often being fluffed up and seen when turning. Imageworks approached the ostrich groom in a modular way, meaning they could run dynamic simulations on large numbers of birds quickly while also being able to ‘up-res’ the complexity for hero moments.

“It all started with the animation,” explains Imageworks visual effects supervisorJason Greenblum. “The anim rig included the hero feathers on the wings of the bird so we could be very specific with poses and key moments in the animation process, and then from there the CFX team would do the rest with simulations. Trish Butkowski, our CFX lead, along with the help of Henrik Karlsson, SPI’s CFX head of department, designed the system using Maya and Katana to groom the bird.

“Then we used Maya’s nHair solver to simulate the stems and we used Maya’s Nucleus Wind and Volume Axis Fields to add wind to the feathers. The idea was to create a system that could look good ‘out of the box’ using the basic setup for the majority of the shots where the ostriches were chasing the heroes, but then have the flexibility to add more layers and complexity as needed when the shot required it.”

Beneath the feathers, Imageworks relied on Ziva VFX’s Maya plugin to simulate the ostrich’s muscles. “It gave them a great wobble in the neck and skin, too,” says Breakspear. “Although, there are some renders where you see the ostrich running with no feathers and they do look like ‘Attack of the Christmas Turkey!’ It’s quite hilarious.”

The ostriches get close to causing certain death when they begin ripping off the roofs of the dune buggies. These were CG roofs, with Imageworks ensuring that the buggy pieces being pulled off “still felt heavy and not look like tissue paper,” says Breakspear. While most of the ostrich action was hand-animated by Imageworks’ skilled animators, several moments required crowd simulations. Here, Massive was utilized.

As the ostriches attack, they of course kick up a wealth of sand. This was handled by Imageworks using a combination of FX sims out of Houdini rendered in Arnold with Katana used for lighting, particles in Nuke, and stock footage elements from the studio’s internal library.

Outlines Greenblum: “We built systems for doing the ostrich footfalls that gave us footprints in the CG ground, sand kick-ups as well as a dust element to accompany the sand element. For the crowd shots, the FX team provided additional dust elements to build up the large dust cloud the followed the birds. This dust cloud became a character of its own in the sequence.”

“Similarly,” adds Greeblum, “the FX team had a setup for generating a suite of elements for the buggy tracks and rooster tails. The comp team used Nuke’s particle systems to add ‘whispy’ dust elements that were kissed in to shots to help enhance the sense of speed and peril. The comp team also used practical dust, sand and debris elements out of our element library where possible to help ground some of our ‘all-CG’ shots with photographed elements.” 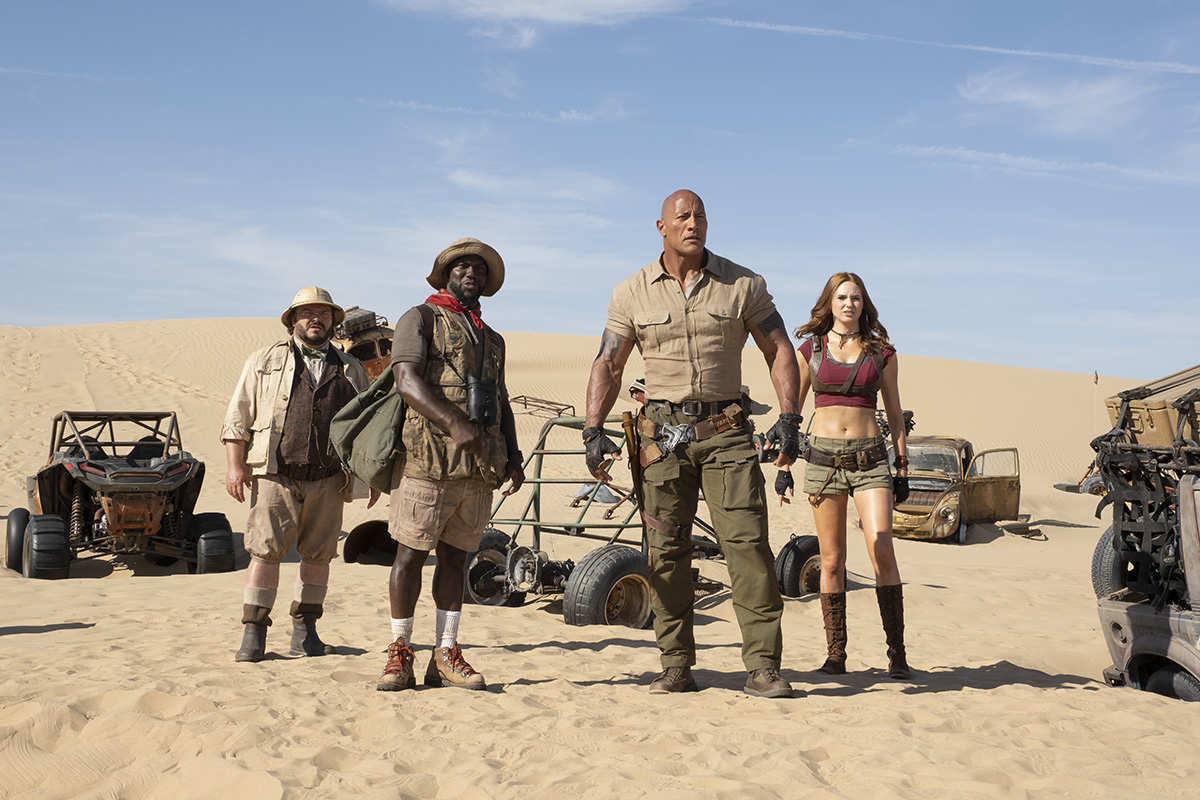 One Reply to “Attack of the ostrich”