What goes into the visual effects for one-shot or one scene in a television series?

To find out, I asked a bunch of artists from Framestore what work they did for a crossing ravine moment in the new AppleTV+ series, See.

Here, a rope bridge used for the crossing collapses, sending several plummeting to the rocks and river below. The Framestore team detail the asset build, matt painting, animation, lighting, and compositing stages.

Charlie Bayliss (CG supervisor): This collapsing bridge shot was the most epic of shots in the first episode, being undertaken as a fully-CG environment, bridge and digi-doubles falling to a rather bone crushing end. These digi-doubles were initially stimulated as rag dolls objects to get the trajectories worked out, then fine tuned with key-frame animation to art direct the final moments of a very painful looking death. The water elements in the ravine were mainly simulation set-ups with some very well placed library elements for some shots. It was really a great achievement of the FX department and compositing to get such a seamless unnoticeable blend of work.

Adam Smith (head of modelling and texturing): During development of the geometry for the ravine, we managed to utilize Houdini in a number of creative ways so that we could maintain a high level of detail without escalating polycounts that would make it unmanageable at render time.

One of the first assets we got started on was the rope bridge because it needed a lot of development to behave as expected and switch seamlessly from live action to CG. Receiving scan data from set alongside a great number of reference images we set to working in maya for the wooden elements alongside a more procedural Houdini setup for the ropes. The look we needed meant that it was key for animation to work alongside modelling, rigging and FX to achieve something that was dramatic and believable to heighten the tension in the finale of this chase. 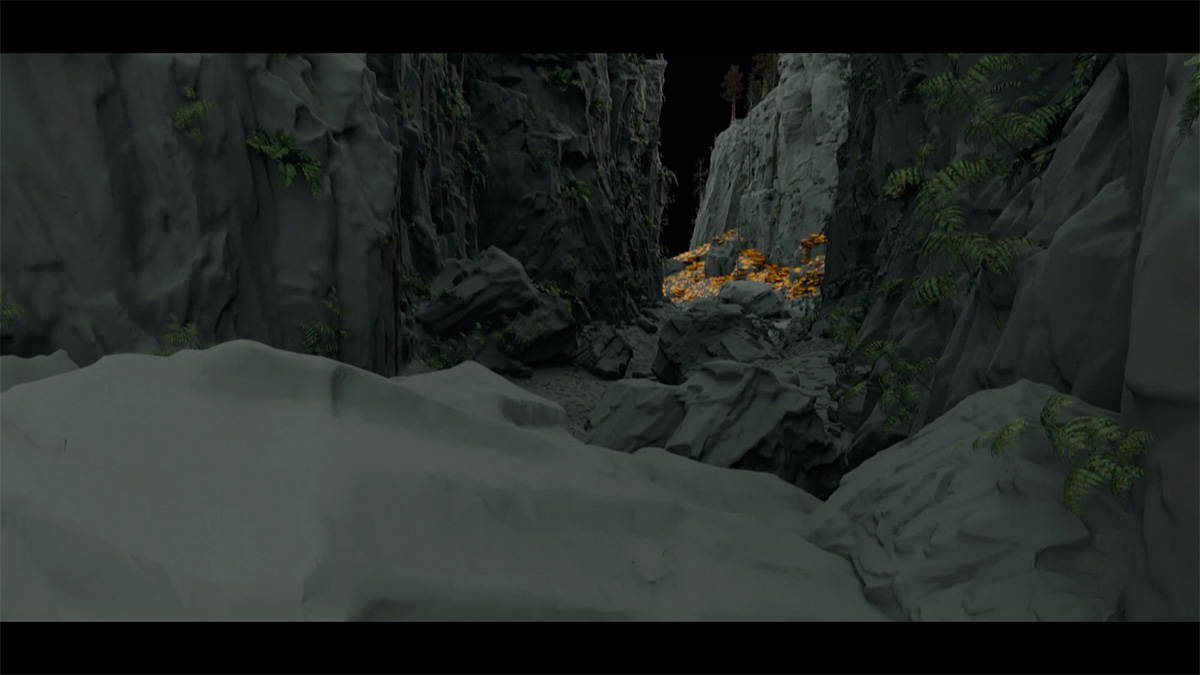 Several sections of rock were created and used to replicate the area around the ridge, of which we were given a photogrammetry scan. Then we built out from there based on concept and reference images to achieve a sense of scale and peril that was necessary for the sequence. Once we were happy with the look the extremely dense meshes were used to create VDB’s in Houdini which were then more manageable and could have further detail projected into them.

Alongside this, a system was built for scattering ferns and trees across suitably designed outcrops whilst an erosion pass helped carve out a believable riverbed for FX to work their magic. As is always the case on these projects, the end result is something created by many hands coming together to form something that’s greater than the sum of its many parts.

Gerard Dunleavy (senior digital matte painter): All the shots in this sequence had concept artwork created to help establish the layout and composition of each shot and because this shot, in particular, was fully CG, this became a very useful reference.

After the initial 3D layout of the canyon was completed by the CG team, the 3D asset was passed to me for matte painting. I began by rendering the asset with a number of utility passes (camera depth, masks, normals, lighting, etc). These gave me an extra level of control when creating the painting in Photoshop. 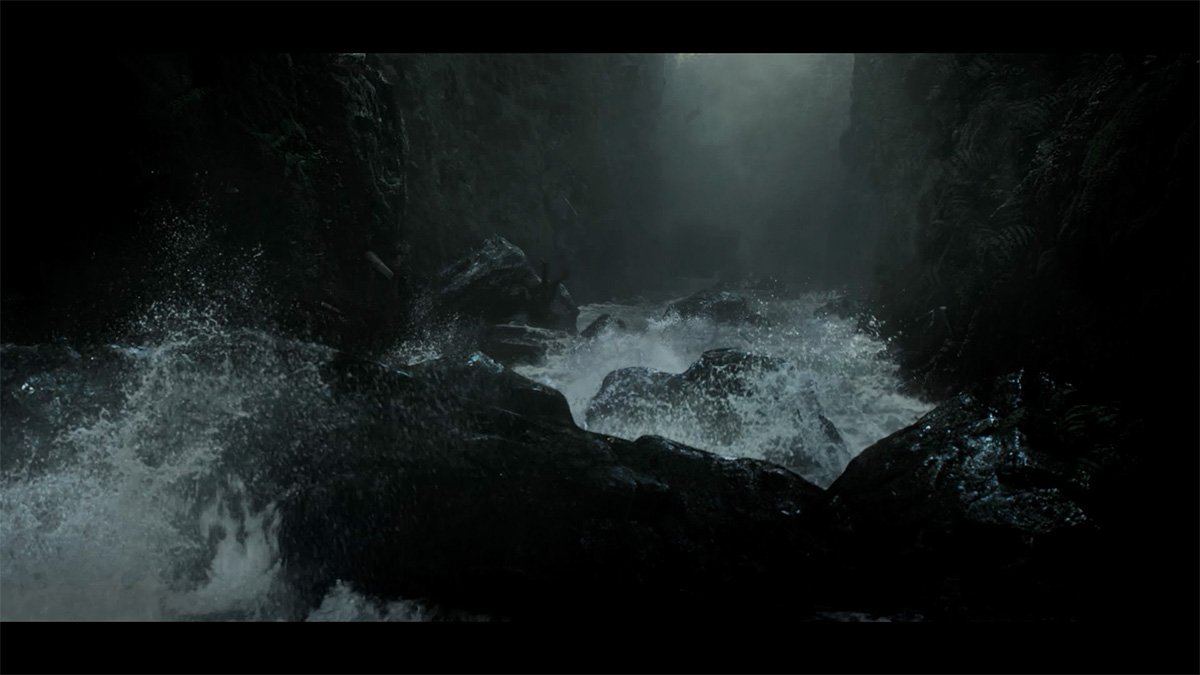 At this stage I also created a camera projection setup that will allow me to project the final painting back onto the 3D model at the end of the process. The digital matte painting was created in Photoshop using a mixture of techniques and utilising on-set photography, procedural texturing and painting by hand.

When creating the painting, special attention was paid to the cinematography, mood and lighting of the previous, live-action shots in the sequence. My goal was to match these as faithfully as possible so this shot did not stick out in the sequence.

Because of the high resolution and quality needed for Apple’s required final 4.5k delivery, the digital matte painting had to be 12,000 pixels at its tallest to cover the entire camera movement and have all the fine detail needed.

Once the painting was completed it was then projected back onto the scene geometry in Nuke, where swaying CG plants and trees, turbulent water effects and falling characters were all composited on top to give the painting life.

Jed Fisher (lead animator): We used a number of methods to create one seamlessly-placed performance of people falling from the bridge. The actors’ performances were tracked so we had a ‘real’ starting point for how they fell off the bridge which helped to keep the performances organic and gave the animation department something to build on top of. Keyframed animation was used with a strong emphasis on creating strong silhouettes that would allow the villagers to be readable as they fell and show their panic as they flailed their limbs.

For the Payan soldiers, we gathered footage of stunt performers falling. We took inspiration from these multiple sources of reference to create the most authentic and interesting fall. A combination approach was taken to create the fall. Classic keyframe was used to create strong poses which was blended with collision simulation as a guide for the soldiers colliding with the rocks. This produced the most authentic performance while allowing the movements of the soldiers to be art directed. 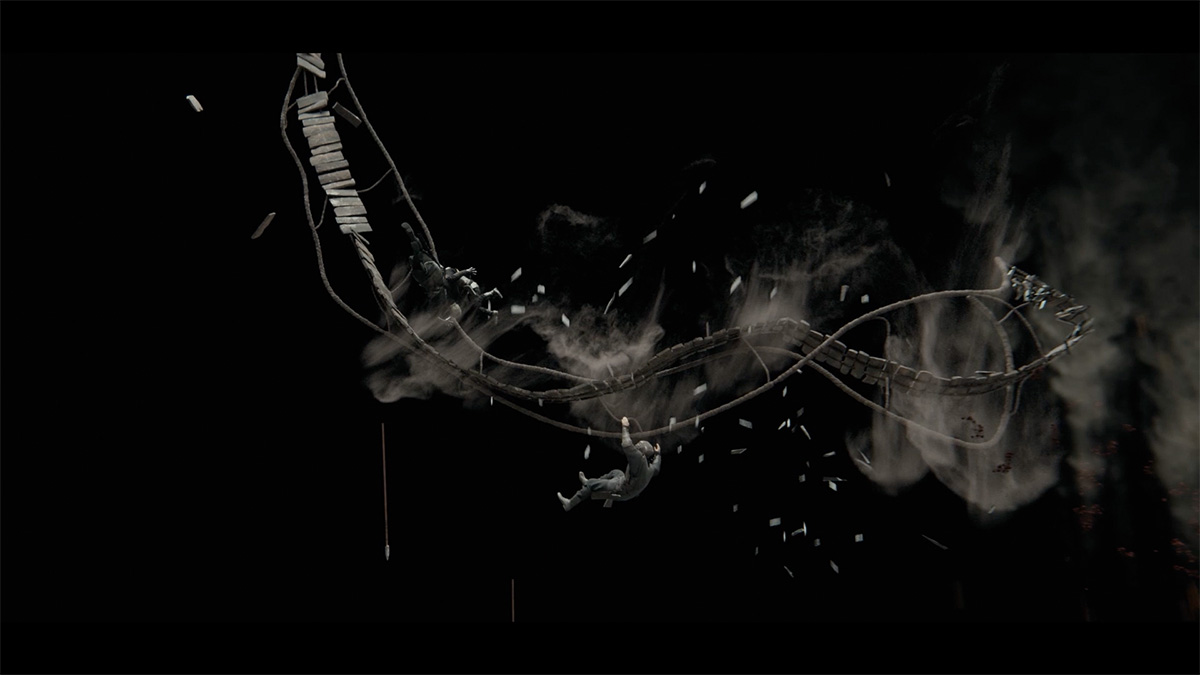 Adam Chabane (technical director): Lighting this shot was quite a challenge, since the final shot was entirely CG and mostly matte painting I had to pay attention to the lighting cues in the earlier versions of the matte painting to match the look. I also used the references we had from the shoot to create lighting plates, IBLs and gobos to use in lighting the shot. Creating the layout of foliage was a challenge, we had a scan of the ravine but the geometry did not have the same level of detail or match the smaller facets which were implemented in the matte painting.

This means I had to apply the matte painting as a projection to the scan geometry and paint my own masks to adjust the positioning of the foliage accordingly. Since the original layout system for the foliage was done on the scan, all I had to do was repeat the masking step for each shot that included those ferns to make them match. Balancing the shot was to be done in comp so I provided as many layers/aovs as possible to give the compositors full control over the final look of the shot. 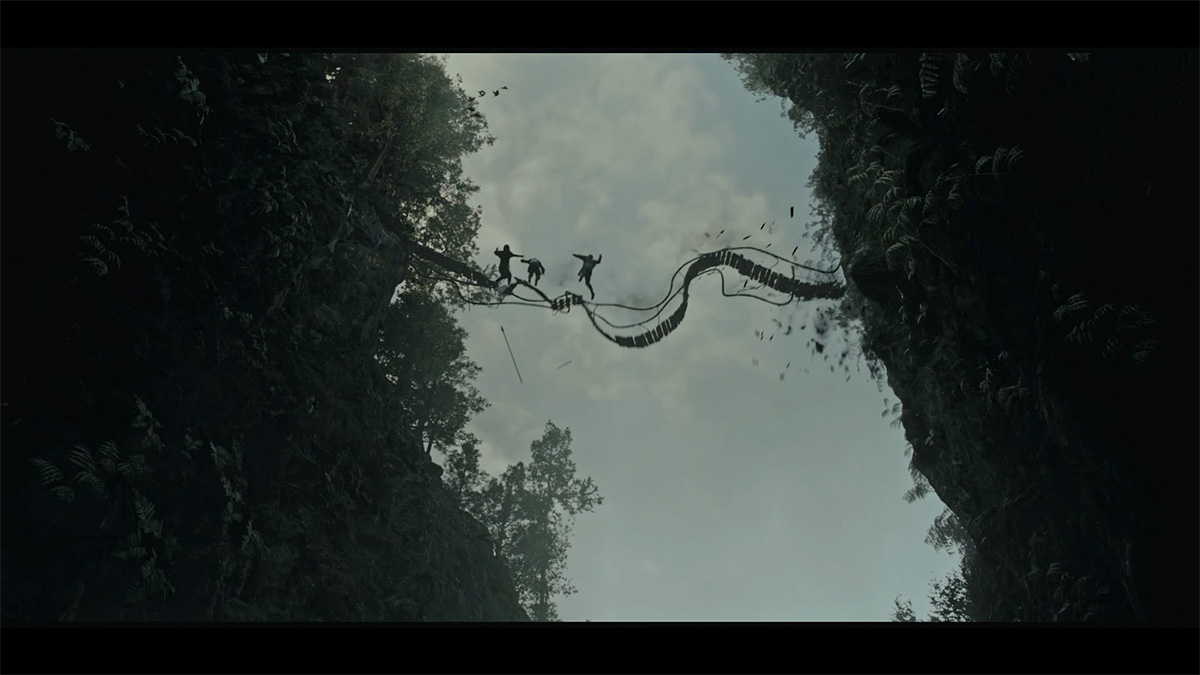 Andy Hunwick (compositor): From a compositing perspective, a key for us was the subtle blend of practical elements into the rest of the fully CG shot to give it the final look. Adding these real elements to some great animation, simulations and DMP work was something of a finishing touch to the shot, making it look completely believable and something that fitted in well between the live action shots in the sequence.