One bus had a section made of rubber, just in case Keanu ‘got into trouble’.

If it was made today, it’s possible that some of the on-the-bus sections of Speed would be filmed on a sound-stage against bluescreen. But that’s not at all how the 1994 Jan de Bont movie was staged. Every bus shot takes place on a real bus, and there were actually around ten different buses retro-fitted for different kinds of action in the film.

Some were designed so they could go up on their sides, some were rigged to let Keanu Reeves go underneath them, some allowed for a driver to sit atop the roof, some were filled with gasoline and blown up, and one, of course, was rigged to jump a freeway (it was pretty much destroyed as a result). befores & afters asked Speed special effects supervisor John Frazier about the many and varied practical bus rigs, and why a treadmill idea for the bus shots was quickly nixed.

Filming on a treadmill? No way

“We actually made this treadmill that would go 50 miles an hour to do a lot of the insert shots,” Frazier told befores & afters. “But Jan asked me, ‘What’s the difference between falling off of that treadmill and falling off onto the street?’ And I said, ‘It’s the same.’ So he said, ‘Well then we’re not using the treadmill, we’re using the bus for everything.’

Blowing up buses and making one fly

You can read about the first Venice Beach bus explosion here in an earlier #speedvfxweek story, as well as the bus/plane explosion, and the freeway jump bus.

The bus that drives itself

Three buses were equipped with a driver on the roof so that interior shots and exterior shots below the roof could be filmed with someone in the normal driver’s seat (but who wasn’t actually driving the bus). “That was the first time we had done anything like that,” says Frazier.

Similarly, some of the buses were made to accommodate the steering, gas and brakes being in different positions. “Whenever they were looking in one direction, we would pick up the pod and put it in another part of the bus,” says Frazier. “We had three drivers – they were all designated in a spot, and we would move the pod around for them to drive the bus.”

It was important for the filmmakers to accommodate the many different angles that would be necessary to capture the action. For instance, the roof-positioned handrail inside was made into a dolly track for the film camera. “The camera could go up and down that thing, but you never saw what it was, because it looked like the handrail that’s through the bus,” explains Frazier. “We took the grips with the wheels on it, and you could roll it up and down.”

The front of one of the buses was also augmented with a plastic plexiglass front section, like a plastic bubble. “We called that one the pope mobile,” jokes Frazier. “The whole camera crew would get inside this big plastic bubble and shoot back towards the bus. It meant they could film but then there wouldn’t be wind on the actors from there being no windshield, and there’d be natural light.”

The bus that turns…on two wheels

The bus in the film makes a few sharp – very sharp – turns, and for that a bus was fitted with truck mounted to the side of it with a hydraulic ram. “Whenever it would turn,” says Frazier, “we’d pull the ram and pull the bus up on its wheels. And we had all these counterweights in the back of the truck, so when you pull on the ram the truck would go in there. But it had enough weight, it would pull the bus right over, and you could drive it on two wheels.”

At one point, Keanu Reeves’ character goes underneath the bus in an attempt to diffuse the bomb. One bus was effectively raised much higher up for that to happen. Another bus was rigged to enable filming of Reeves on a trolley car (a John Frazier creation that was a dolly car with disc brakes to control speed and safety). 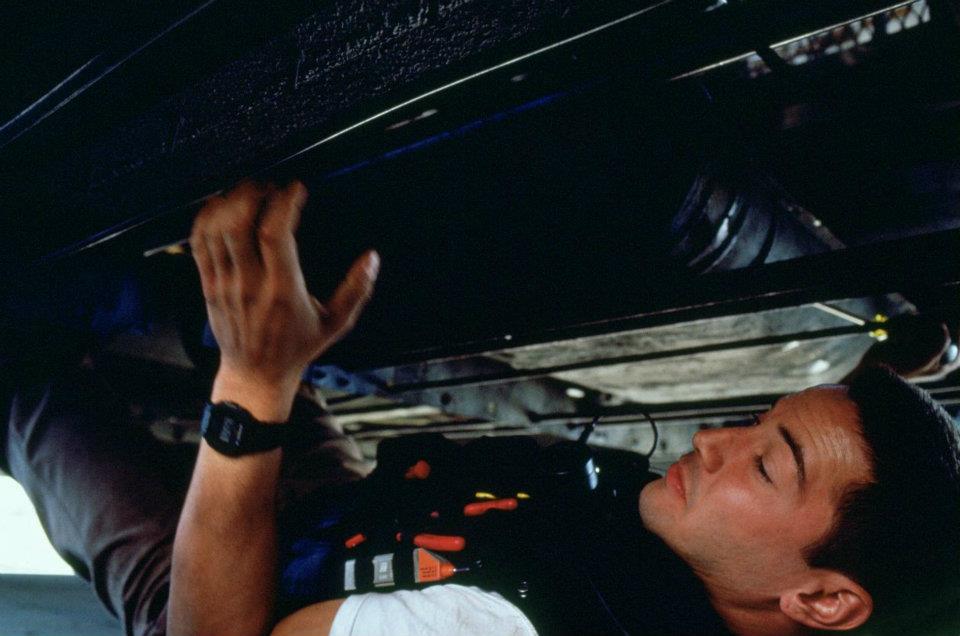 This bus had the motor built up inside of it. “It was a little Chevrolet V8,” outlines Frazier, “and then we made it chain drive, and the reason for that was in case Keanu got in trouble and the bus had to spit him out, he wouldn’t be hitting the motor. The back end was all rubber. And where the tyres were, we had coverings in front of all the tyres, so if he got in trouble, it would just spit him out the back of it.”