An animator’s perspective (and a special bonus excerpt from befores & afters magazine).

It took 30 years to make, and it’s hard to describe, but Phil Tippett’s MAD GOD is truly unlike almost anything people have seen before. Partly stop-motion animation and partly live-action, the experimental horror feature was this year released on Shudder, having also stirred up audiences at a number of festival screenings.

befores & afters thought it would be interesting to get the thoughts of someone who worked on MAD GOD, and so we turned to Webster Colcord, an experienced stop-motion and CG animator who has worked at Tippett Studio on several projects previously.

In this excerpt from befores & afters magazine, Colcord outlines his experience coming on as a puppet and props fabricator and animator–and even actor double–for the film, and what it took to get inside the mind of the legendary Tippett.

Webster Colcord: At that point, Phil was trying to figure out what I could do. First he had me building some miniature props. Then some build-up stop-motion puppet fabrication, and set decoration. Then he kept raising the bar. My first animation assignment was for the siege on the fortress sequence, a fairly complex shot with multiple puppets, lots of cloth, a stone splitting in half. 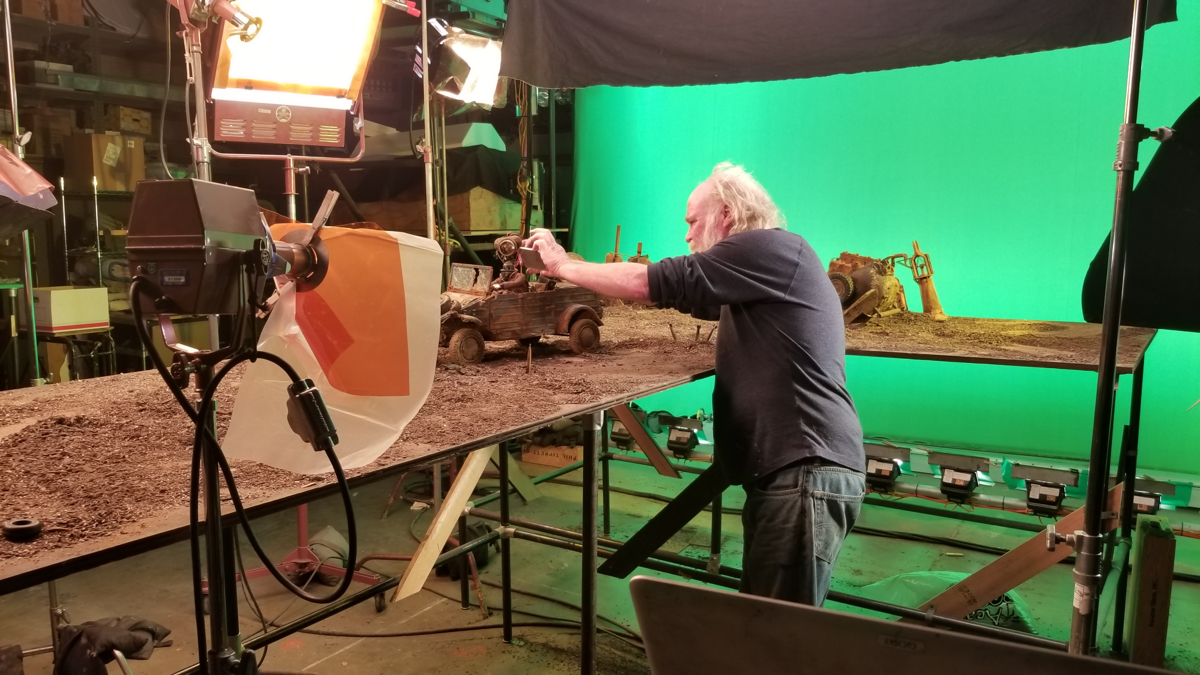 Soon we got into a high speed miniature shoot with these GI Joe doll-scale puppets for the siege. That was a deep dive because it had wind machines, stop-motion foreground puppets rigged as cable-actuated action miniature puppets, background puppets that were rod actuated from underneath the set, and lots of stuff in the air–smoke, sawdust, dirt, and vermiculite. Phil would take the stop-motion puppets, loosen the armatures, thread cables through them, and we could kinda puppeteer them for the high speed photography.

Vermiculite–a soil additive–it’s one of these old movie tricks that Phil has in his vast repertoire. When it flows through the air and you’re shooting at high speed, it gives a certain kind of blurred shape that just looks great.

The siege shoot was pretty crazy. Upstairs in the Tippett stage building, the CG animation crew would be toiling away on projects, and Phil had me downstairs building a contraption so that five people could control something like 30 puppets from underneath the set. Then we would bring down a bunch of super talented animators as volunteers for half an hour of puppeteering in wind, dirt, sawdust and smoke. The guys would go back upstairs to their workstations with sawdust and dirt stuck in their hair and in every fold of skin.

b&a: I think what’s always fascinated me in particular about MAD GOD, is that it isn’t just one thing. Even though people talk about it as stop-motion, which of course it is, it’s a mix of things. How did you think it might ultimately be described?

Webster Colcord: I’ve noticed that everybody calls it a stop-motion film, too, but there’s every technique in there. It’s also a mixture of different scales. You might cut to one shot that’s a miniature–a little patch of dirt with a character’s legs walking which was only built and rigged for that one shot.

Then cut to a totally different scale–or even a live actor–in a subsequent shot, not quite seamlessly but there’s something neat and weird about switching between the different scales in such a deliberate way. It throws the viewer off, you just have to submit to it.

I think it gives you a feeling at once that you’re being led through a story by a very intentional storyteller. Someone who is crafting a mood, but also has a lot of experience putting together a great action sequence.

The filmic language seems so familiar, because we’ve all seen his sequences in movies before, but instead of Tauntans and dinosaurs it’s WTF?!? It’s alarming for some viewers, because Phil’s using refined Hollywood moviecraft in a way that’s familiar, but in the service of a story that’s unconventional and maybe subversive. It’s like being around Phil when he’s using power tools–scary!

Read more in the print magazine, which you can buy here.