With plenty of final visual effects as well.

In David Leitch’s Bullet Train, Brad Pitt plays a mercenary taking on fellow assassins aboard a bullet train in Japan.

Live action scenes on the train made use of train car sets with LED walls running adapted live-action footage, pre-composited and rendered by DNEG.

On set, Lux Machina handled the virtual programming and operation of the LED volume. This was made up of 98′ LED walls on both sides of the train, along with four endcaps or return flanges that helped fill in the gaps. This provided enough LED wall to only cover the length of one car–there were three physically built for the project–so Lux Machina orchestrated a solution of suspending the entire set-up from a track and dolly system to help it move along the length of the train depending on which car was needed for shooting.

DNEG then crafted many final visual effects shots for the film, including for a spectacular crash scene. befores & afters caught up with DNEG visual effects supervisor Stephen James to find out more.

b&a: What’s interesting on this film is that DNEG had to do a whole lot of final VFX, of course, but there’s also the shoot and virtual production part of it. Tell me first about that aspect of it?

Stephen James: DNEG did a good three or four months beforehand of pre-production where they came at it from a few different angles. Because I was still finishing up on Dune, Daniel Paulsson supervised the LED portion of the work. They had production teams in Japan to shoot lots of array footage on long stretches of straight highways that we could use as back plates for some of the backgrounds. Of course, it was heavily stabilized and sped up to get it to look like a bullet train.

That took a good few months of progress because any time you’re dealing with these massive resolutions, things can take quite a bit of time to work through. It’s just a lot of data, lots of rendering, lots of testing. It was quite a bit of back and forth testing with the LEDs to make sure where we could push it to, and where we needed to draw the line of transitioning over to CG and bluescreen and greenscreen.

At the same time, we were also working on CG environments for LED content. It’s quite a stylized film. There were moments where they wanted to go through a city and have huge blocks of color. The streets would be flooded with red or blue lights, tons of signage. You take reality and just crank it up a few notches to get it up to the level of the style of the film which is quite stylized, bold colors, with crazy lighting.

So, we had all this content provided and we looked into various solutions for the LED content, but the next decision was, do we go real-time with this? We did render some things in Unreal, we had portions of city there where we could do that. But because we had this array footage that was filmed, we opted to instead render everything in the same way. We’d have these massive 180/360 degree resolutions that we could then render tiles out of. Everything was unified into one massive resolution and then output to be split out onto these big screens.

b&a: What was the set-up for the train shots?

Stephen James: They had multiple train cars on set that they could walk up and down on. There was a custom screen that ran the length of the train on either side. Depending on the shot, they could wrap it around fully if they had a shot looking straight back or extend it out longer for specific shots. 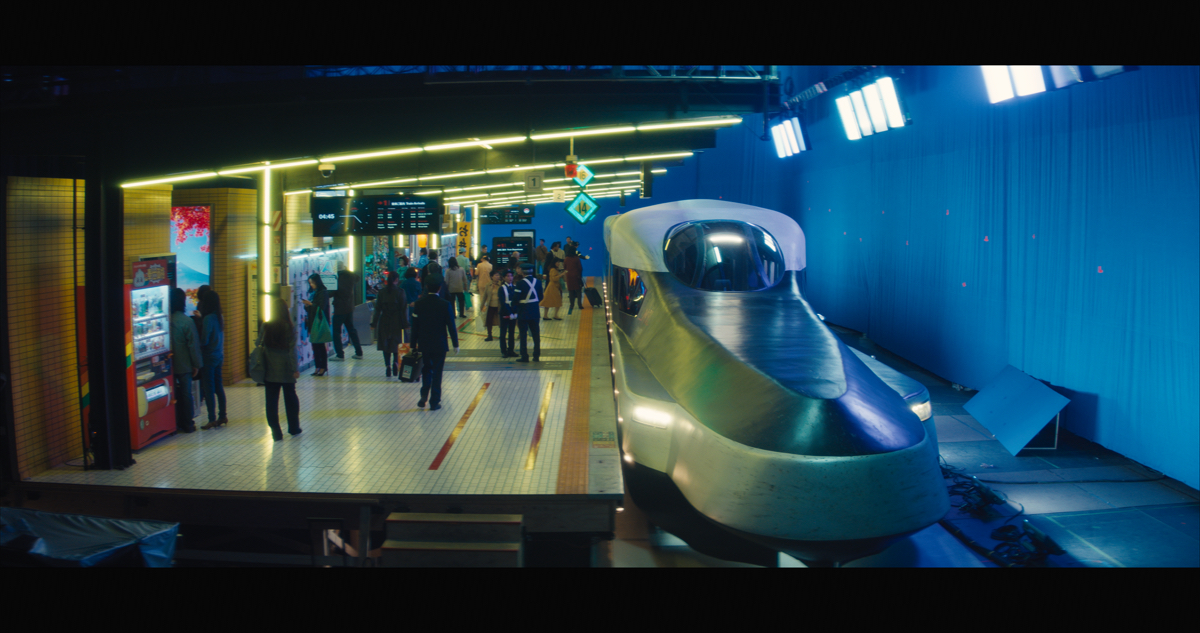 This was also the reason why we opted against major real-time rendered environments here, as well. With the speed of the train and the distances, you don’t really notice a lot of parallax and movement within the train, so real-time rendered imagery to match camera movement was not necessary. Still, on set, VFX supervisor Mike Brazelton was able to use real-time tools to add or remove tunnels, layer in passing-by trains etc.

b&a: There’s a whole bunch of exterior train shots, cities and expansive environments. How did DNEG tackle those?

Stephen James: We didn’t want the journey environments to take a lot of attention, but they still needed to have quite a bold style to them. If it was a sunrise shot, we would go really bold with the colors and silhouettes, all of course inspired by photography from Japan of sunrises on the rice fields and all these beautiful locations that they travel through. It’s a fine line of not taking too much attention, going quite bold with the style, and also just making sure that it’s not too obviously repetitive. 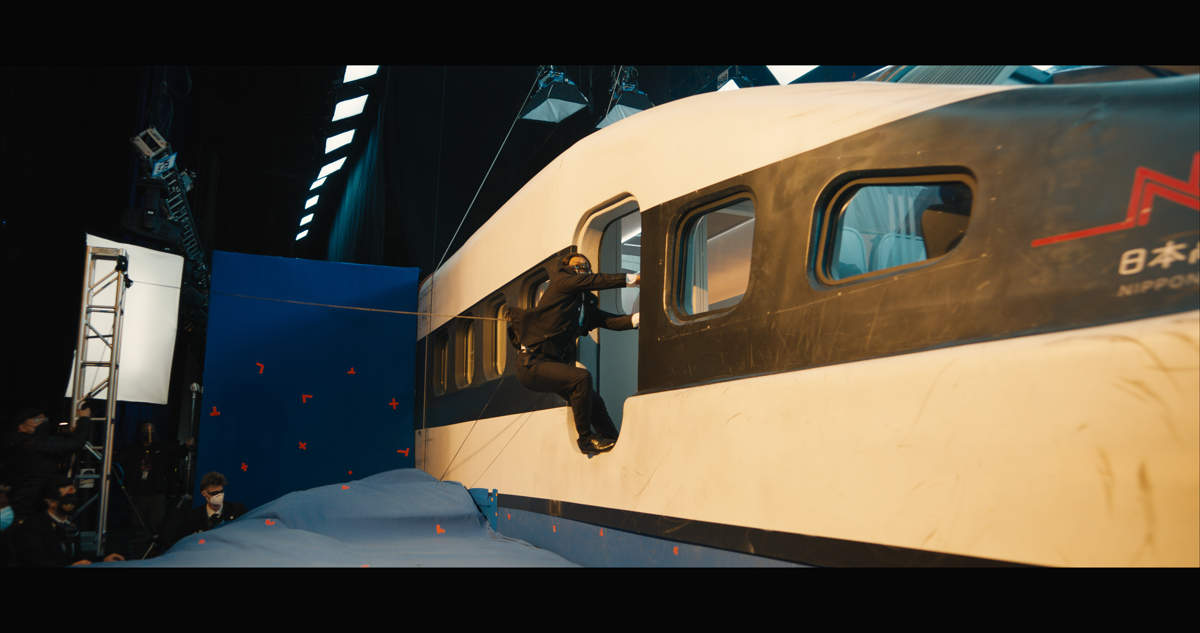 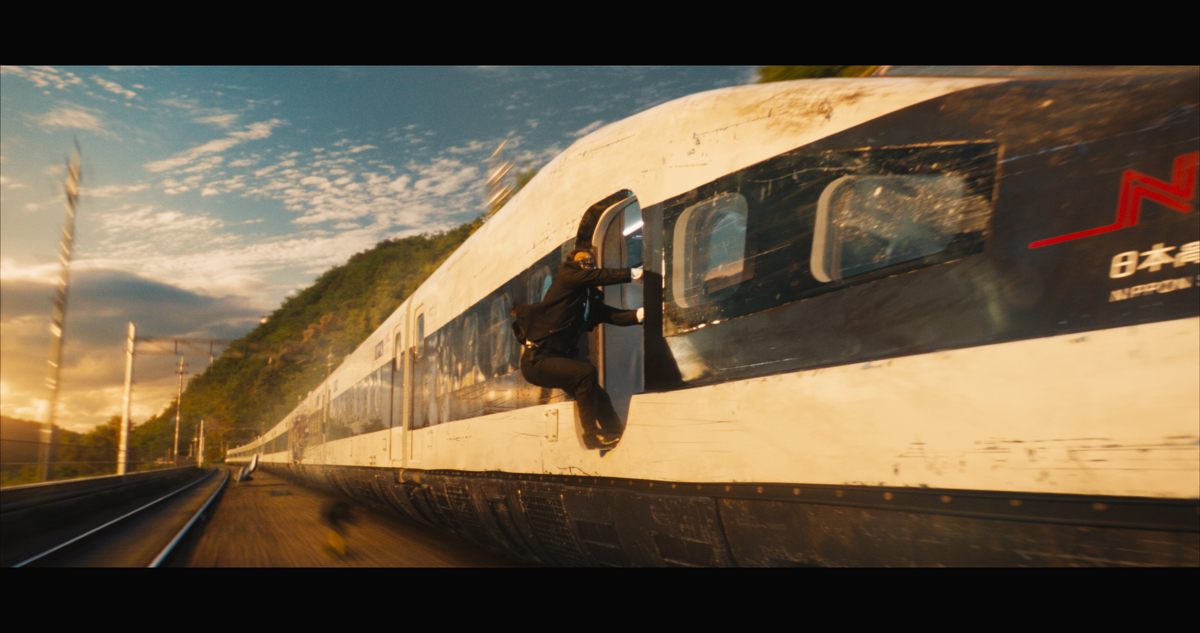 We needed to keep changing things up throughout the film, just constantly passing some unique areas. We had to build environments in five or six kilometer chunks that we could run our trains down in order to have a good amount of shots that we could run back to back. That was definitely a unique challenge for the show, so our Environment supervisors Jeremie Touzery and Romain Simmonet used OpenStreetMap as a procedural foundation that we could build on top of.

b&a: When trains are slowing down or leaving a station or going through the city, are they all-CG shots?

Stephen James: They did build out a train on set, so they could board and get off the train. There would be sequences where they’d be on top of the train outside for some action sequences, but for the most part we fully replaced the practical train with our full CG train. We wanted that really glossy look to it where it just looks like a beautiful shinkansen train with all the environment reflections all over it. 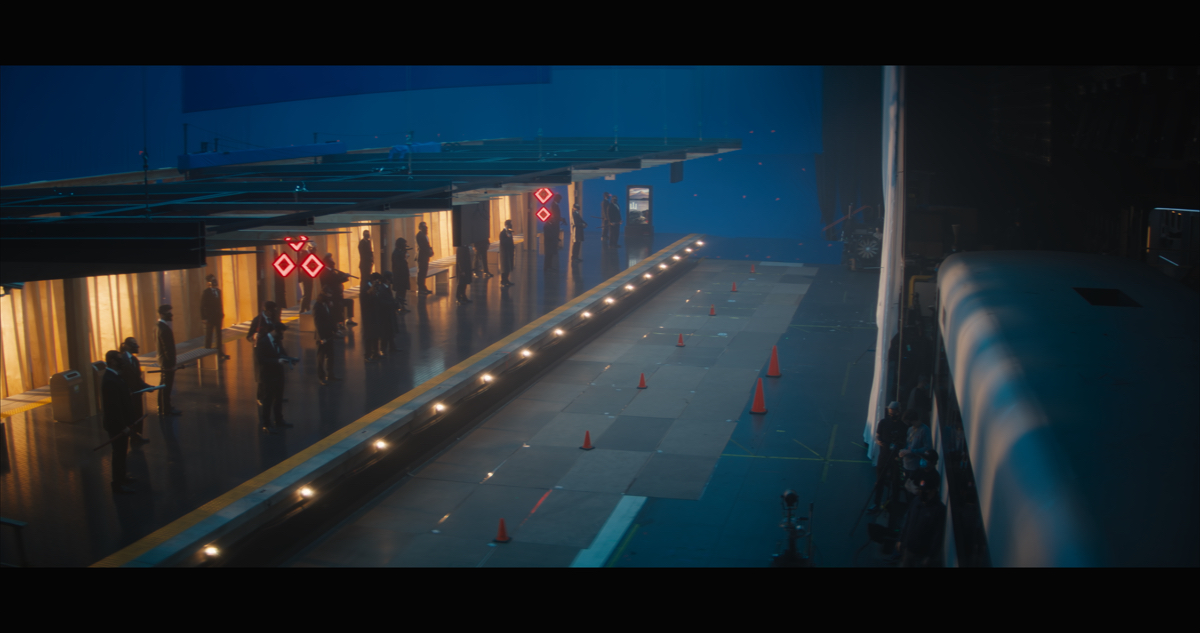 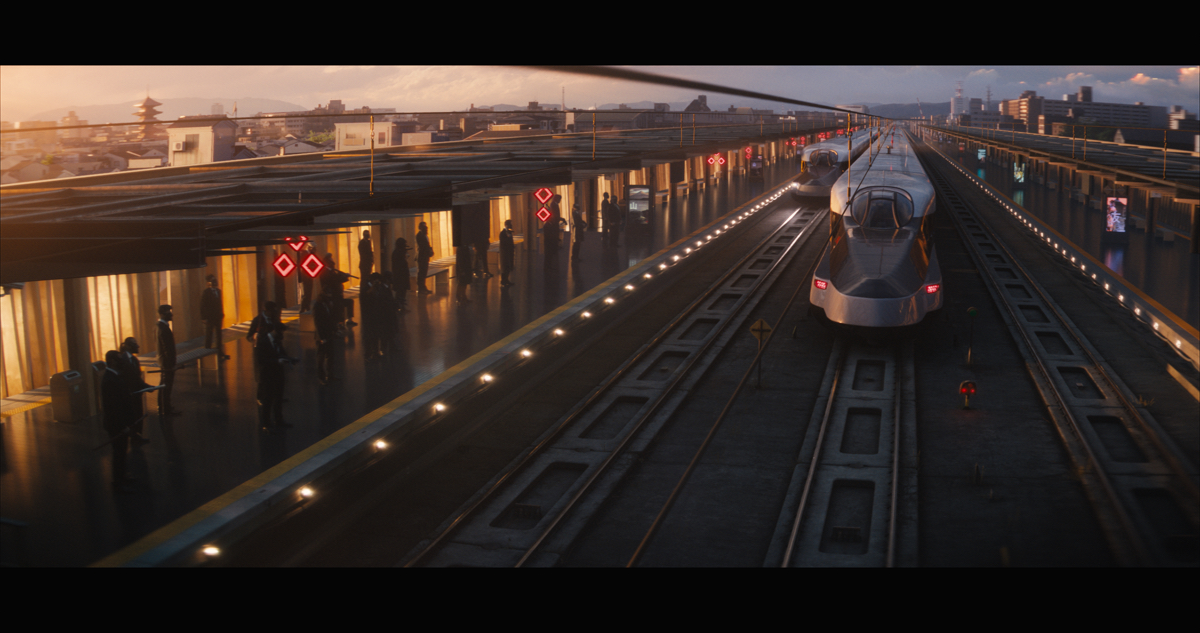 I think that was one of the challenges in general in that shinkansen are super smooth and they are kept very clean, which doesn’t make it easy for us in CG. So, there were lots of details like panel wobble on the sides, buffeting marks, scratch marks, just whatever you can get to break up the reflections so it doesn’t feel too perfect. But at the same time, it is a stylized film so it’s pushed in that more clean and super reflective direction.

b&a: What were some of the challenges there of lighting that correctly, rendering it, getting the right stylization for shots like that?

Stephen James: In some cases they actually filmed either drone plates or shots on highways in Japan, so we would be essentially placing our tracks into the highway systems within the cities. There’s a bit of a balancing act to make this train go 300 kilometers an hour around a curve in the city, you know, it’ll look like it’s going to fall off the track immediately. But at the same time they wanted that style where it just felt like it was shooting through this environment. 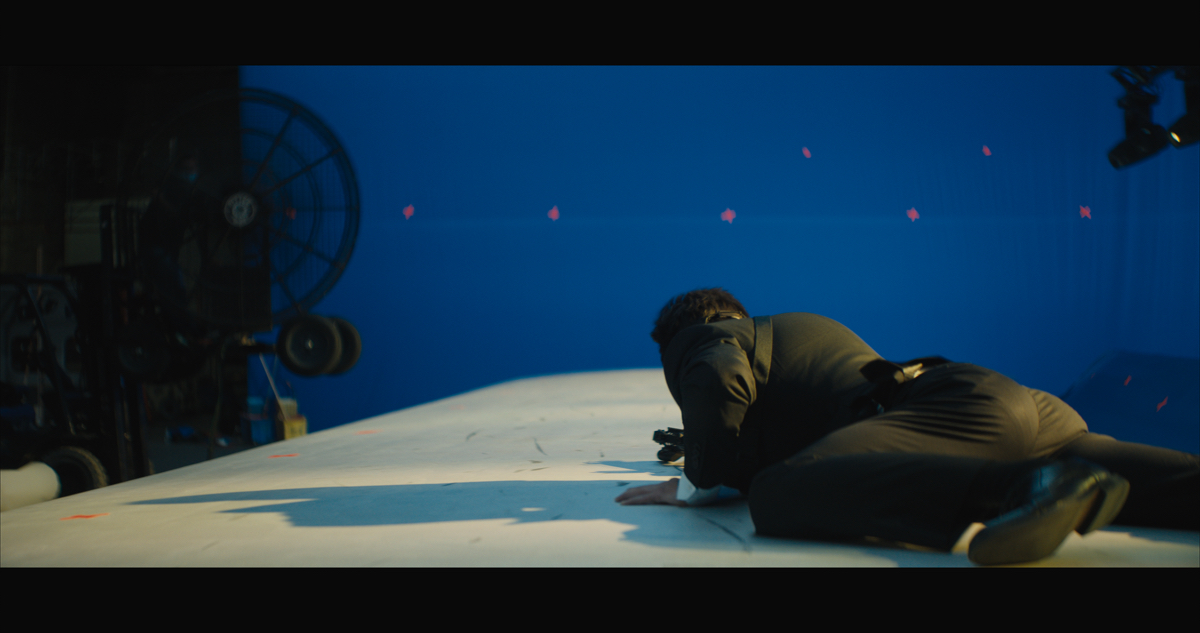 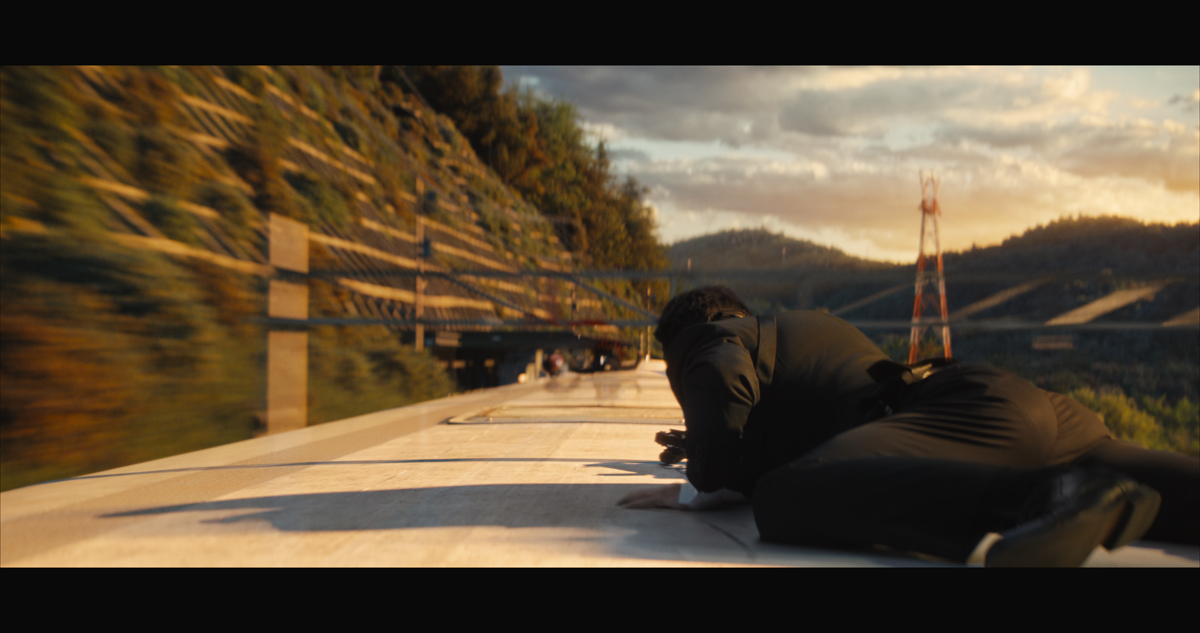 b&a: Was there any kind of LIDAR or photogrammetry effort from Japan to help that process?

Stephen James: It was definitely a unique film for that in terms of reference gathering. Normally you’d send a team out there, do LIDAR captures, photography, our whole set shoot team. What we ended up doing was working directly with JAID Productions in Japan.

Our shoot supervisor Dan Kunz trained them to use our kits remotely. We’d be up late at three or four in the morning to capture sunsets with them and we’d tell them, ‘Oh, go over there! It’s a beautiful spot.’ And they’d run over there, capture the stuff and upload it immediately. Dan would stitch tiles together immediately to see if it worked okay. We’d all do that in real-time overnight.

b&a: Tell me about the fight scenes and any of the more invisible effects work in there such as wire removals or face replacements or digi-doubles?

Stephen James: With a lot of the action, some of it is played for over the top humor, so you want some big laughs from the gore. Sometimes it needs to take a step back and really be a bit more serious. We had some digi-doubles that we could rip in half and blow people’s heads up and stuff like that for those big laugh moments, those moments where you cover your eyes in the theater. 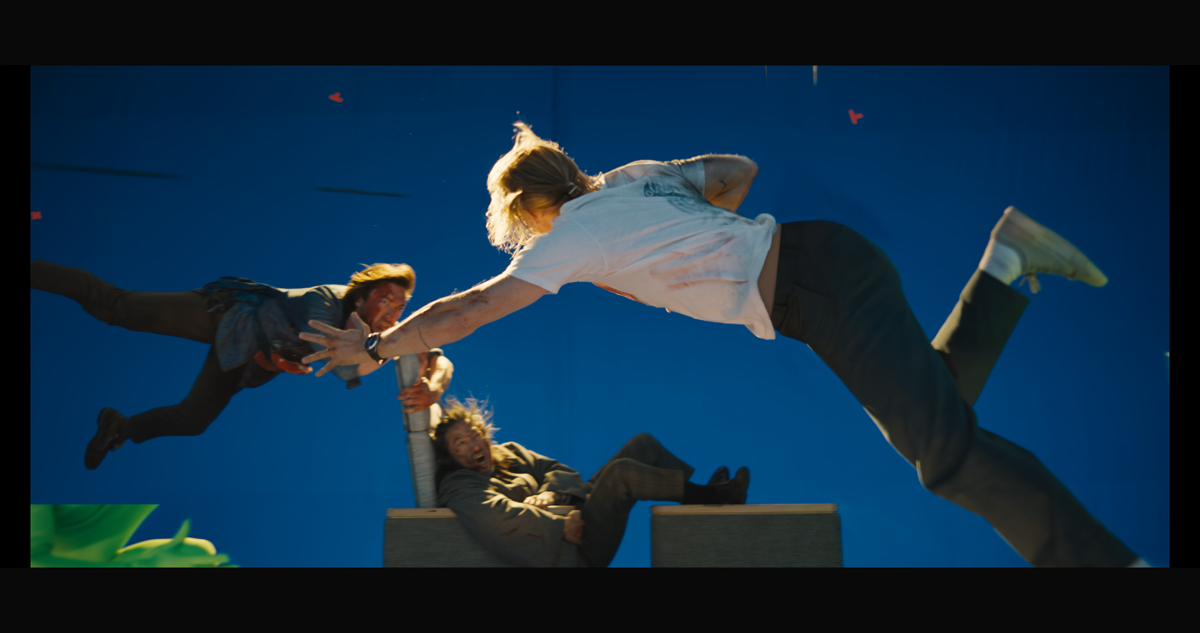 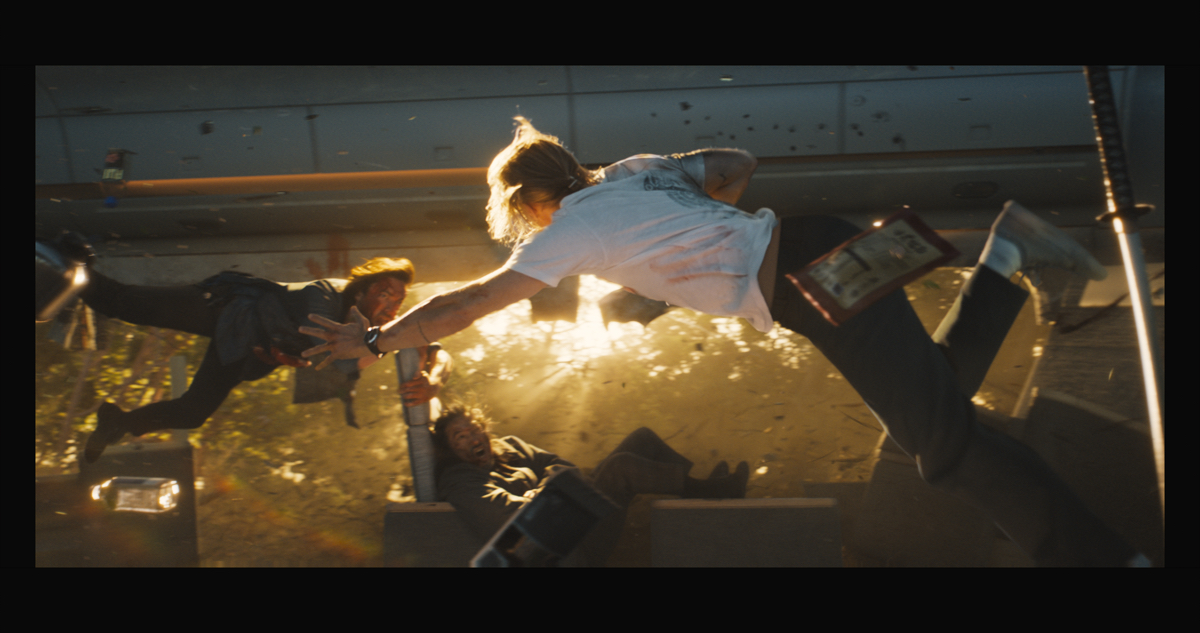 And then there were moments where, say when the elder is making his way up the train and slaying people, it’s not meant to be necessarily funny, it’s meant to show he’s an incredible swordsman. You want it to feel beautiful and have all the blood arcing off the blades and just spraying on the walls. I hesitate to say beautiful when we’re referring to people dying with blood, but it’s meant to be very ‘clean’.

b&a: What about when they’re hanging off the train?

Stephen James: For that moment, they had the on-set train on bluescreen and they were really hanging off the side with wires. There were tons of wind forces, they’re flying around, grabbing onto each other, that was all captured in-camera. We had digis for them for reflections on the train, because this thing is super glossy. It needs to reflect them and the passing environment. 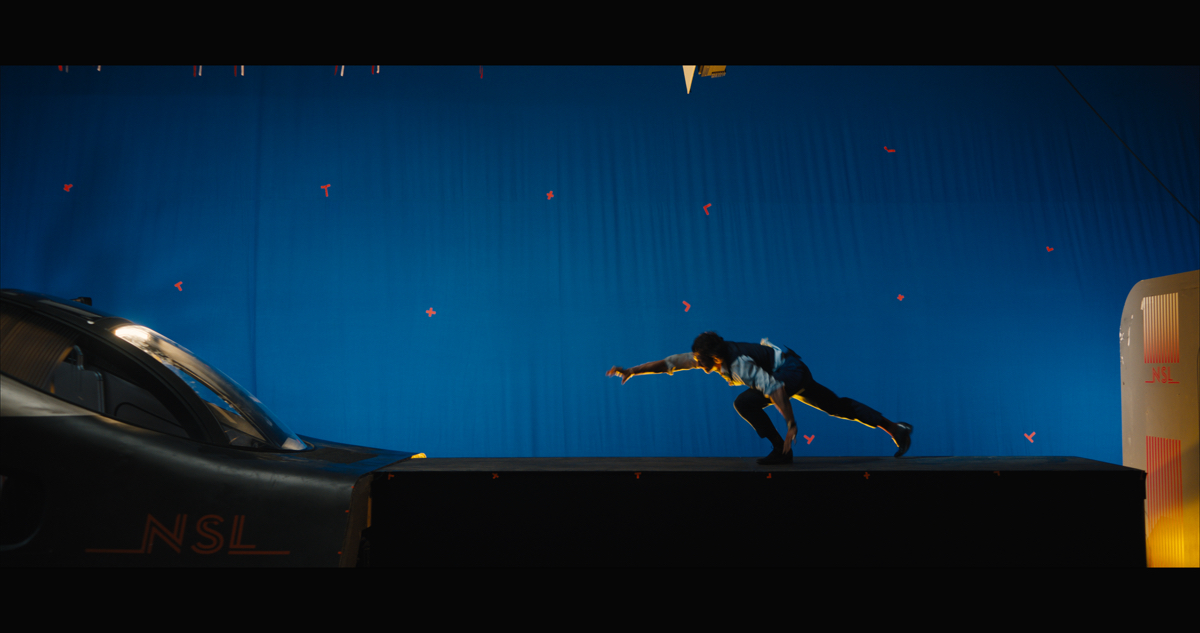 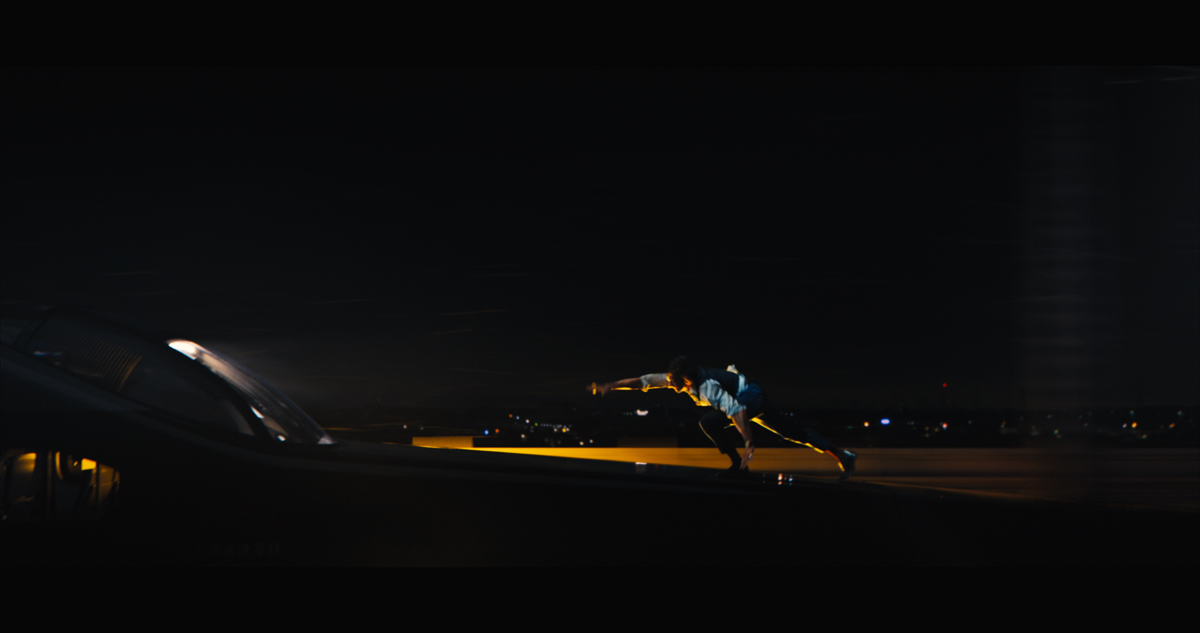 b&a: The train crashes are fascinating, including because of the interior shots. There’s that moment where there’s all this stuff inside and Brad Pitt’s character launching through. How did you co-ordinate that?

Stephen James: There was quite a lot of previs done by our team, supervised by Alex Cannon. When it came to postvis they did add some additional spins around and more exploration. Again, it needs to ride the line of danger and comedy. It’s all in slowmo, you have all these specific props and story moments that you need to have passing by the camera. Everything that you’ve seen through the movie is flying through the air, essentially.

b&a: For the exteriors for the train crash, how did DNEG approach the destruction required here?

Stephen James: We knew we had to destroy the train from the start, so we built with heavy destruction in mind. Our build supervisors Michael Smith Kennard and Ryan Woodward looked at practical shinkansen trains for how they were designed inside. We were able to have an engine, wall frameworks, foam in the walls, bundles of cable, all this complexity that gives us some interesting detail that we can smash apart and reveal. 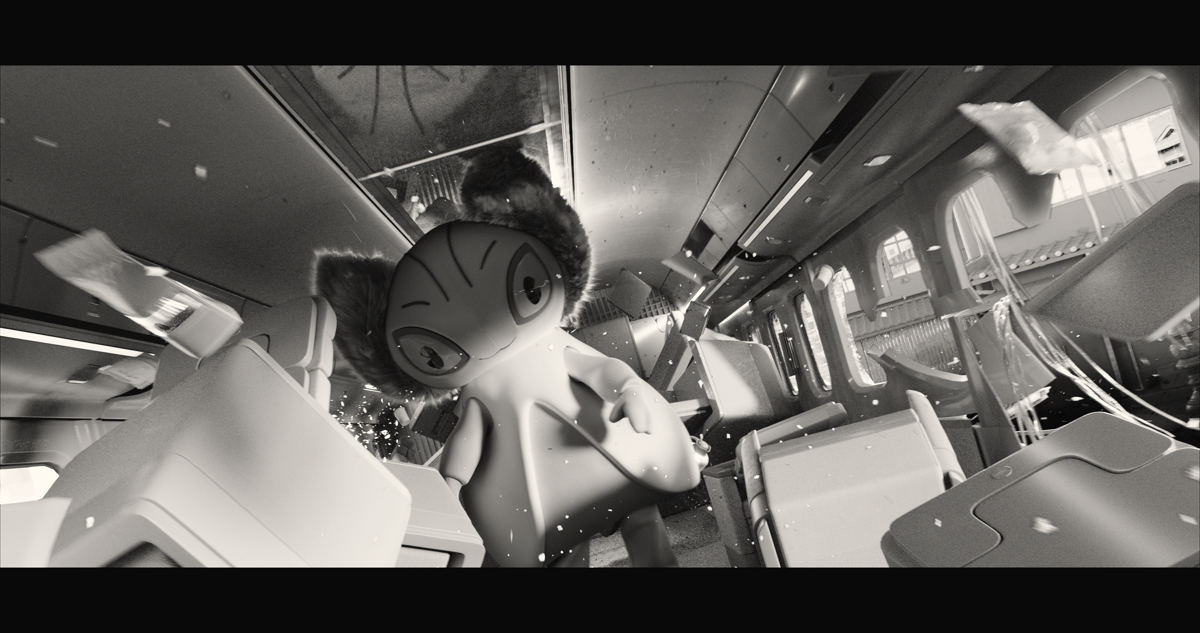 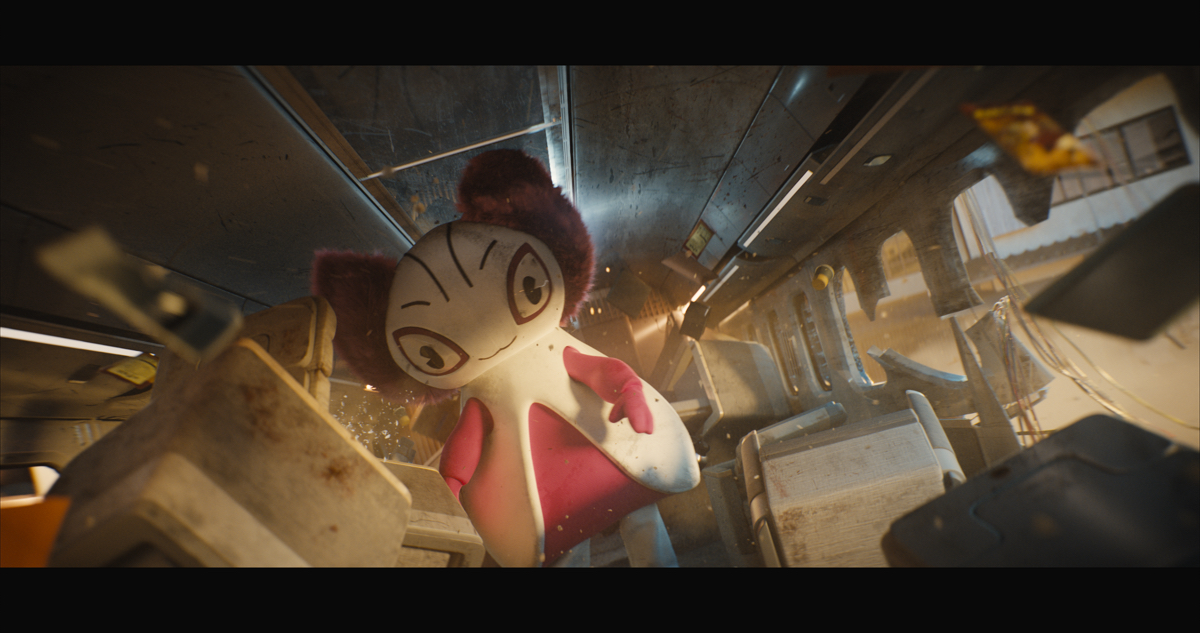 The first part of the train destruction is when we have to rip it open in what we called the ‘can opener’ scene. The whole side gets shredded open by our fx team. Then we switched to a pre-destroyed train to give us realistic damage that blended seamlessly into the on set destroyed car. That is left open for the remainder of the film which ups the intensity heading into the final crash.

Hero trains and props needed to be done by animation and then there needed to be a hand-off to FX to do the final kind of wobbles, shredding, shattering, all those different materials had to behave quite differently. It was the same thing for trees, dirt, ground, and the whole mountainside and plaza environment. 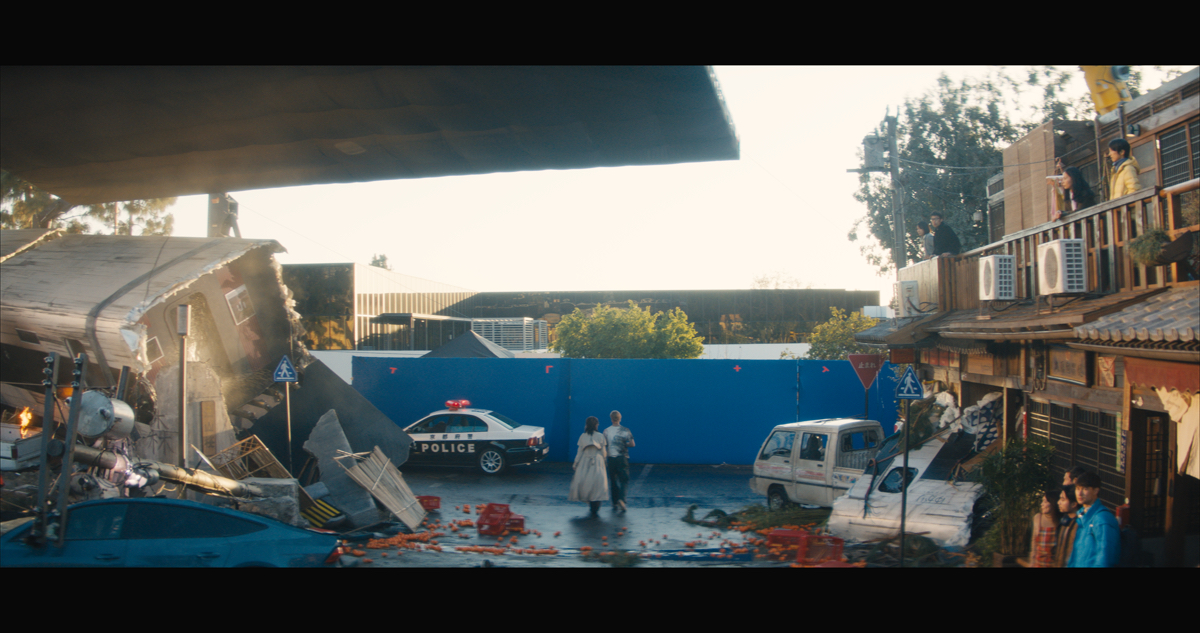 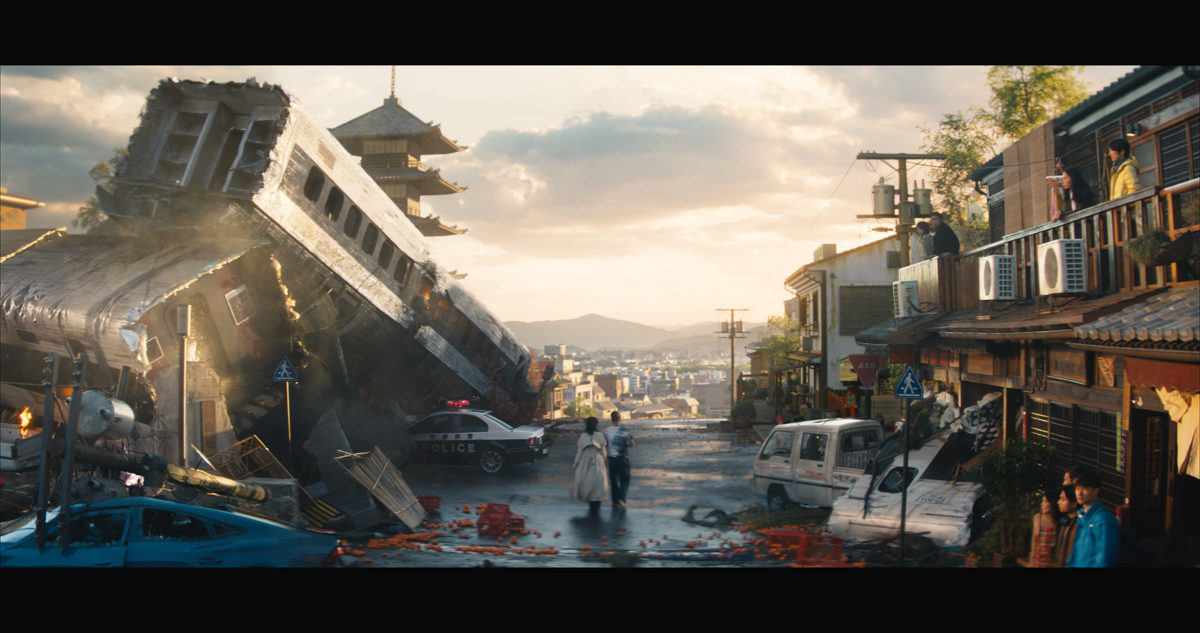