After watching season 2 of The Witcher and seeing some of the great behind the scenes videos Netflix had put online—including the range of stunties and stuffies utilized during filming—I wanted to learn more about the process the VFX team this series had followed from on-set through to final shots.

So, I decided to ask Daði Einarsson, the production visual effects supervisor on season 2, to detail what process he and his team followed for the key creatures: the Basilisks, Eskel Leshy and Nivellen. Here, Einarsson explains in his own words how previs by The Third Floor and stunts formed key parts of the planning, as did SFX and make-up effects, along with the final VFX execution by studios including Cinesite, RVX, Rodeo FX and ILM.

Planning: Firstly VFX Producer Gavin Round and I previs’d the sequence with The Third Floor, lead by the very talented and lovely Pete Panton who tragically passed away during production. Together we developed ideas for staging and animation of the sequence as it was scripted. The previs was crucial to the whole scene planning, budgeting and execution. This is really the birthing of shot ideas and such a creative part of the process. Stunts coordinator Adam Horton and his team then built their fight choreography and folded it into the previs. After several rounds of tweaks, revisions and getting the sequence on budget, we had a really solid template for our shoot. 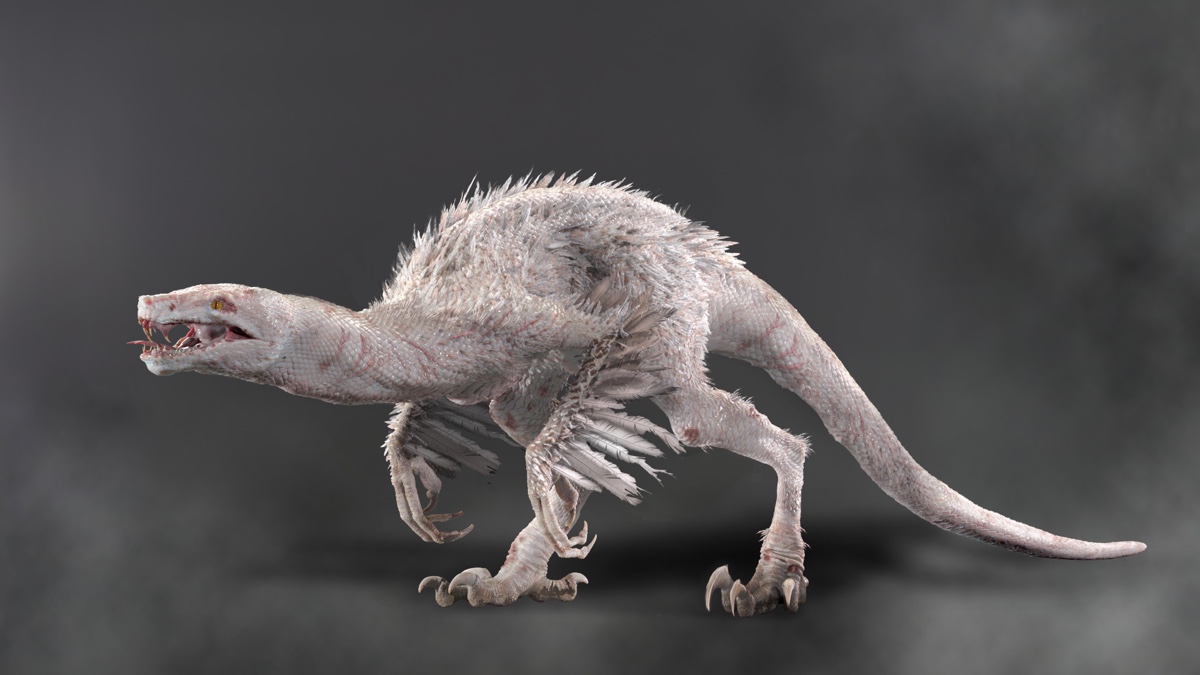 While this was happening we had turned over the asset build for the 3 Basilisks to Aleks Pejic and his team at Cinesite. They worked from Production Designer Andrew Laws’s concepts and started to flesh out and develop what these Basilisks would be, how each one was bigger and more gnarly than the previous, how they would move and behave.

On the set: Once we had our creatures signed off by showrunner Lauren Schmidt Hissrich and the creatives at Netflix, we made polystyrene Basilisk heads to scale, mounted them on poles and had them painted green. For the tails we had green pool noodles wrapped on the other end of the poles and measured to length. Our stunts team then donned the infamous green spandex suits and hoods, held the Basilisk heads and tails and played the parts of each of the three Basilisks as they appeared from the portal and fought the Witchers to the death. 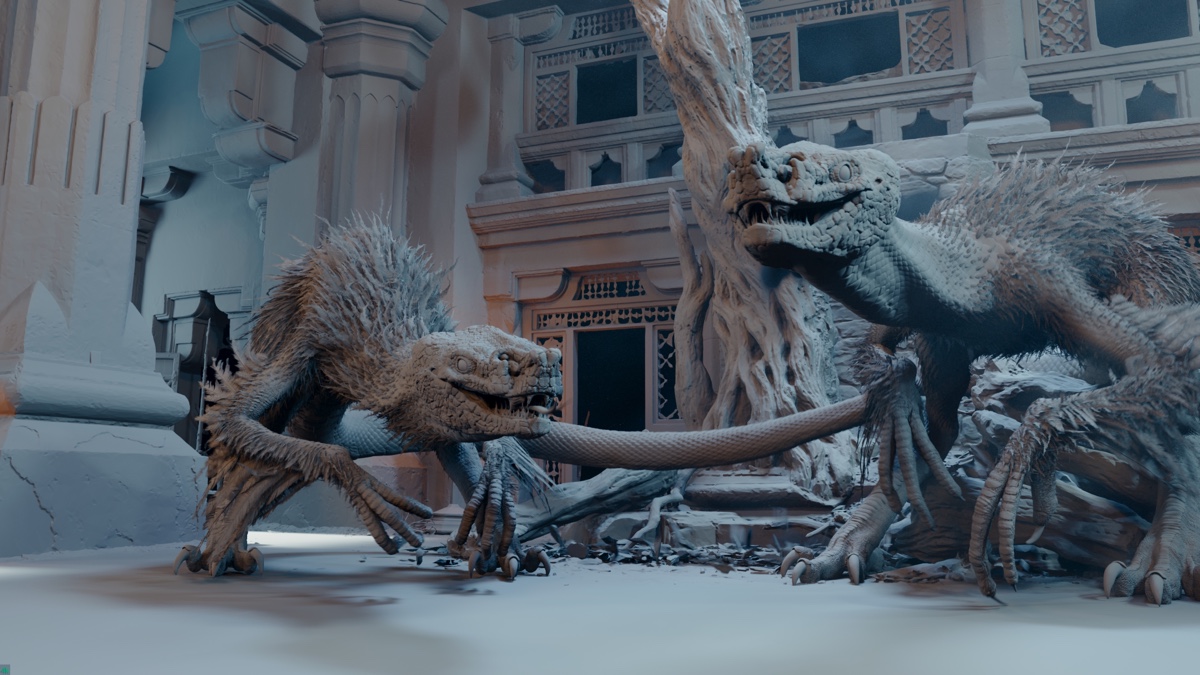 SFX Supervisor Stefano Pepin and SFX Floor Supervisor Ronnie Rackley created impact explosions, wind and breakable tables and benches to give maximum impact for the Basilisk interactions and stunt Witchers being ratcheted and thrown around Kaer Morhen Great Hall. Henry Cavill and the rest of the Witchers had rehearsed with stunts coordinators Adam Horton and Nik Schodel so shooting the scene was pretty nailed down. Henry and the other Witchers were fantastic and really got into it, referring to the previs and our AI visualisation tool Cyclops from The Third Floor; an iPad app which can load in geo and animation from Unreal Engine and see it play out within our set.

For every setup we would talk it through one last time, show the previs, show the AI on Cyclops, talk the stunties through the size and shape of the Basilisk, agree the timing of the sfx and then shoot. In between takes we would watch it back, make adjustments if needed and once happy with a take we would give the thumbs up to move on to the next setup.

All this took place on a sound stage at Arborfield Studios outside of London, so we needed to extend the Great Hall to show the expanse of Kaer Morhen and its environment above and below. Again we used Cyclops to stage the shots relative to the environments once the fight rolled out onto the exterior terrace. We would show Henry where he was as well as Director of Photography Romain Lacourbas and the camera team so we could line up for maximum scope and optimal composition. Matthias Bjarnason and his team at RVX then added their CG extensions of Kaer Morhen and the mountains around as well as CG snow flurries and atmospheric effects.

Turnover: Every shot would have a set of data to go with turnover. We would always shoot a clean plate where camera operator James Frater would walk through the shot at a slower pace, making sure to cover all the areas that he had shot. We would of course get chrome and gray balls, colour chart as well as witness cameras of the take turned over. Our green Basilisk heads were really good scale and spatial reference. 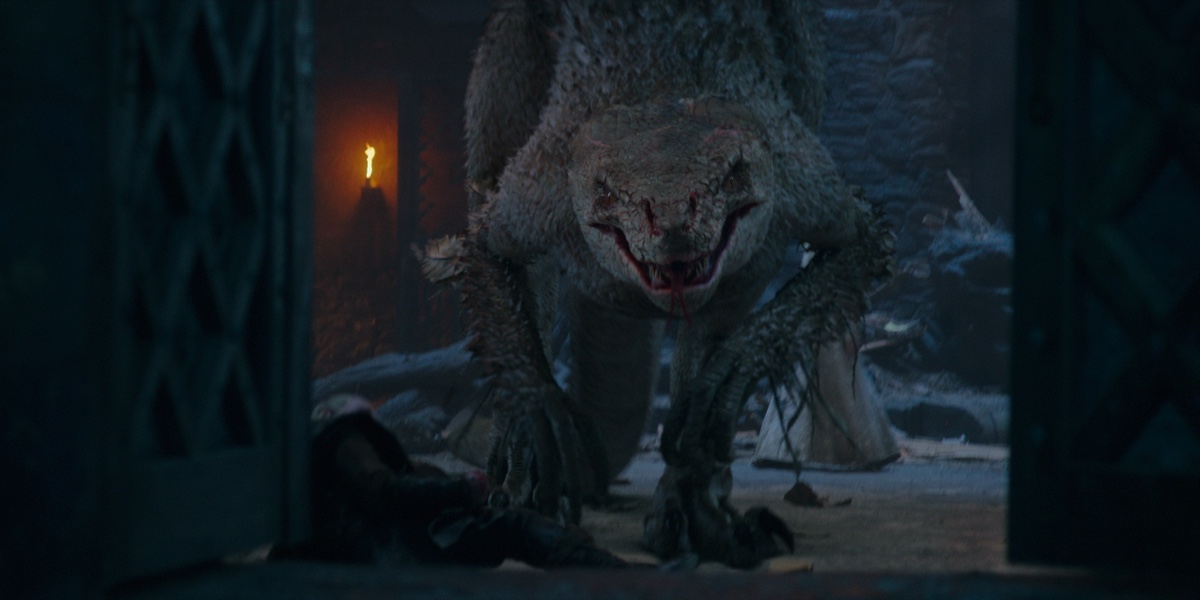 Basilisk performance: In terms of the performance of the Basilisks, Gavin and I talked to Aleks and his team at Cinesite with the previs as our starting point. We discussed and developed the Basilisks’ movement and fleshed out the animation starting with blocking passes. We had broken the fight sequence into beats which we defined as a natural flow of shots that related to each other. This was really useful for progressing the scene and maintaining continuity of performance across the shots.

Cinesite and RVX worked together on the exterior shots with RVX providing final renders and comps for all environment extensions and fx with Cinesite handling the final comps where they would add the Basilisks and their interactive fx including snow, fire magic and blood fx to RVX’s plates. In the end, many of our hero final shots are incredibly close to the original previs we made which is a very satisfying roundtrip.

Previs to performance: For Eskel Leshy, we again started with Pete and his team and previs’d our take on the scene from the script. Eskel really was a great coming together of a design from Andrew Laws’s concept artists, prosthetics from Barrie Gower, the fight coordination from Adam Horton and his team and our vfx methodology, vision for the final result and planning. 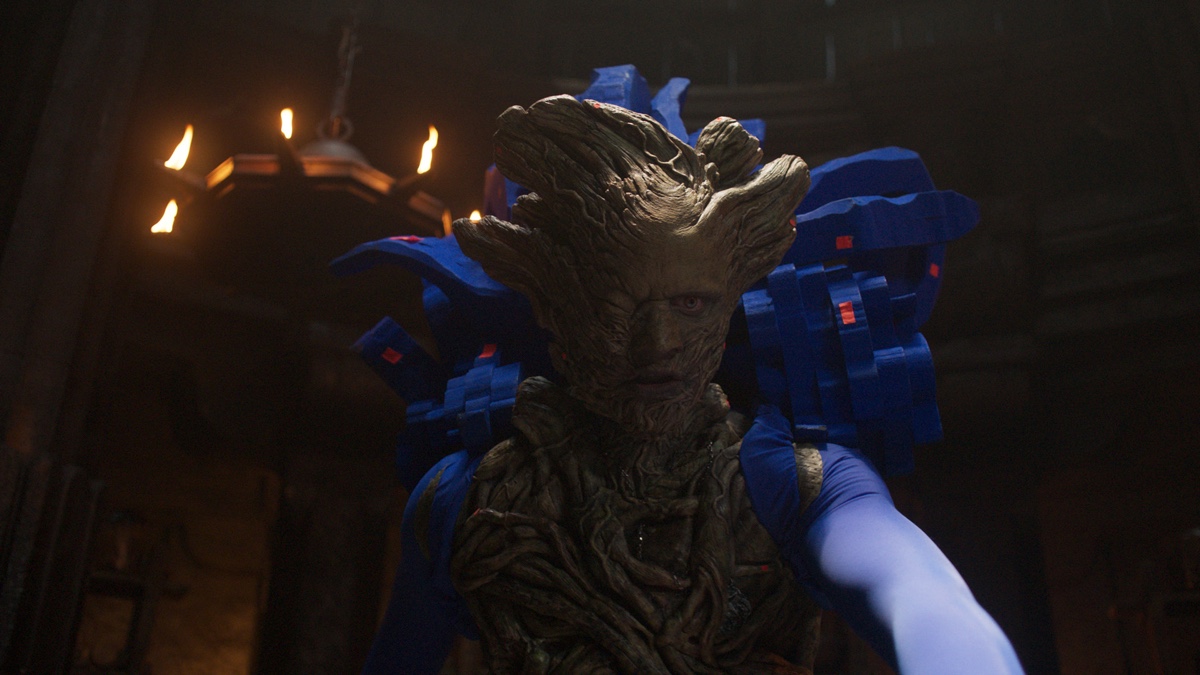 There were two different performers for Eskel Leshy as well as a fully CG version. Firstly there was Basil Eidenbenz who played Eskel who was dressed in the hero prosthetic and a blue suit standing on a raised platform for his acting moments. We had a stunts performer wearing a duplicate prosthetic piece for the wider action beats who would wear blade stilts and throw long blue foam tentacles that stood in for the vines.

The fully CG Eskel was reserved for wide shots that defied what the stunts performer could do in terms of covering ground, descending from the upper level or hoisting himself away. Overall the approach worked really well with Henry Cavill being able to act with Basil for the emotional beats and then slog it out with the stunts performer for the action. 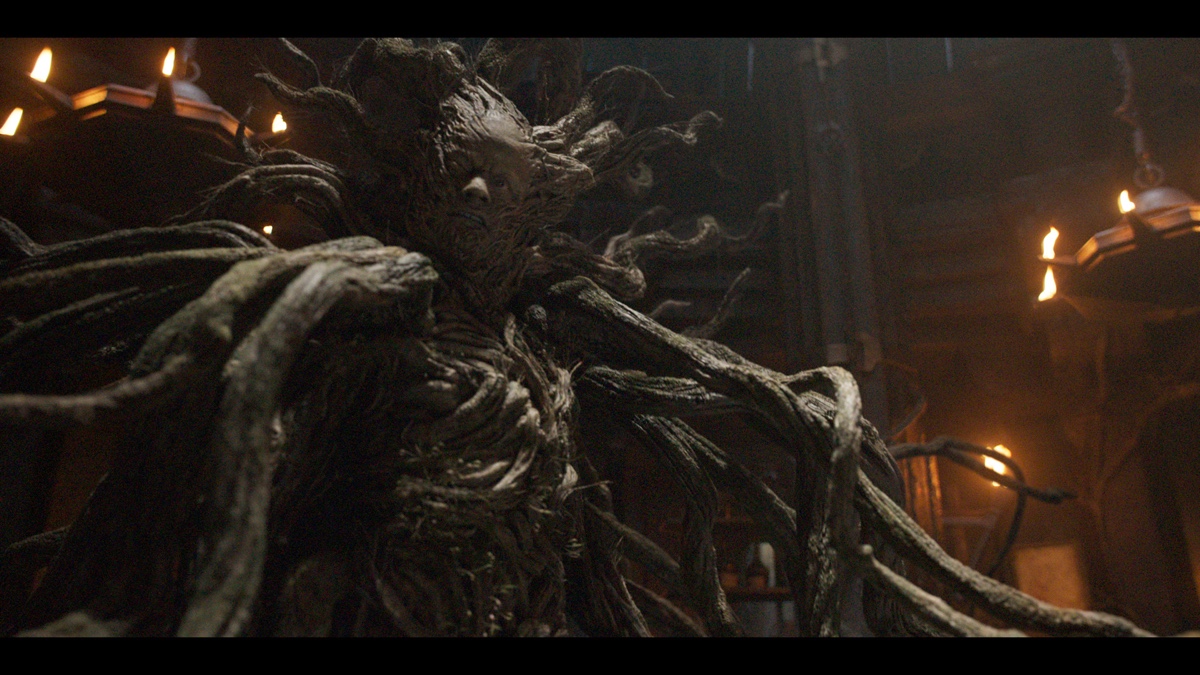 Crafting a creature: Sébastien Francoeur and his team at Rodeo FX worked closely with us to develop the movement of Eskel. His extended legs and multiple vines that stretched out to act as crutches and mace-like weapons provided a challenge and an opportunity to really develop an interesting way for Eskel to move and fight. Then for the close ups we added fine CG twigs and moss to the vines to emphasise the fact that Eskel was infested by a tree virus, almost like a fungal infection that consumed him and tells that story both micro and macro.

A practical shooting approach: Nivellen was an amazing character to be a part of creating. Andrew’s designs for Nivellen showed a bipedal, essentially human shaped creature with a bear / boar hybrid head. We decided on a CG face performance capture approach using a head mounted camera to capture Kristofer Hivyu’s performance. The body and head piece was developed by Barrie Gower leaving an opening for Kristofer’s face with a head mounted camera attached to a hard hat under the headpiece.

We really wanted to find the right partner for Nivellen and couldn’t have wished for anyone better than Jeff White and his team at ILM. We felt very strongly that we needed the best possible team with experience of delivering believable facial performance capture as Nivellen essentially is the co-lead character in episode 1 alongside Geralt and Ciri with a huge amount of nuanced dialogue scenes.

Using this approach we were able to allow Henry Cavill, Freya Allan and Kristofer Hivyu to freely act their scenes together, largely uninhibited. Kristofer’s performance is so fantastic and its amazing to see how well the ILM team were able to capture and translate that to a very different face with large features and tusks without ever becoming a caricature. I love Nivellen so much.

A meticulous VFX task: Jeff and his team did some great research on Kristofer during lockdown when we didn’t have access to him. They found images of him and developed some key expressions for Nivellen based on Kristofer’s distinctive impishness. This really allowed us to develop the asset and make sure that we were creating a lovable character that felt alive and would capture the essence of the performance.

Once back in production we scanned Kristofer to capture his facial range of motion for the FACS face rig and then shot the scenes as well as clean passes, lighting, fur and texture reference passes of a “stuffy” Nivellen head created by Barrie Gower, witness cams, balls and charts. 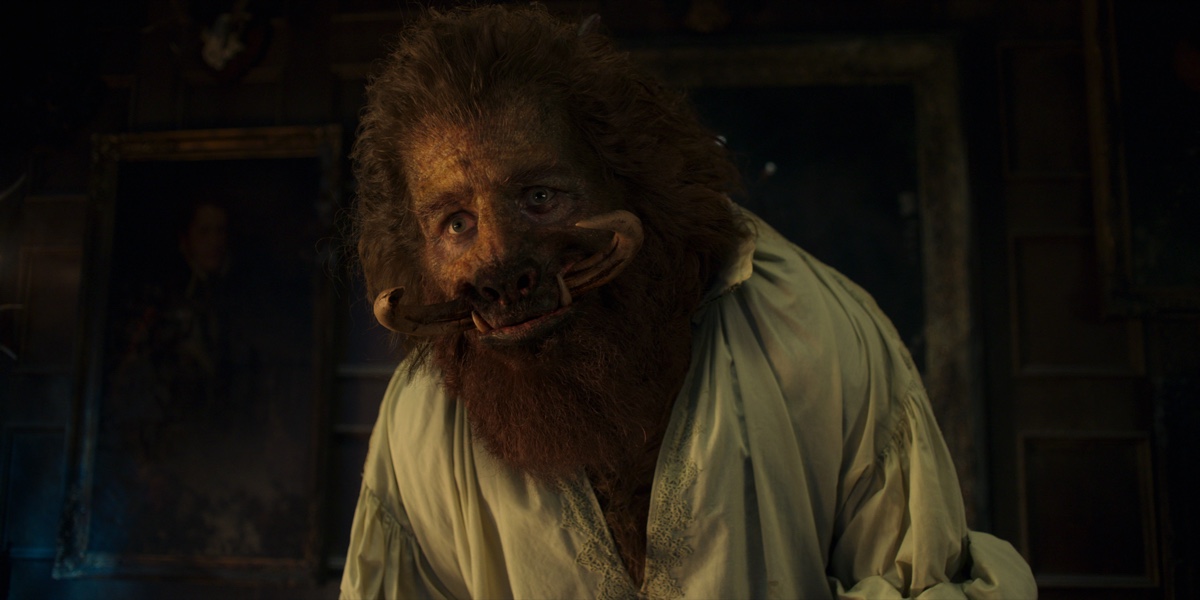 Once the shots were turned over and in production, it was all about feeling Kristofer through the CG. The eyes were crucial and its so great to see those eyes so alive and with such expressiveness, always CG of course. I say “all about the performance” as if creating photoreal fur that blends in with the costume fur, lifelike skin and photoreal eyes, all lit, rendered and composited to seamlessly blend in standing next to human actors is a given. It’s not and the entire team at ILM are stars. Such a pleasure to see the final result and to have worked with such a great team from start to finish.