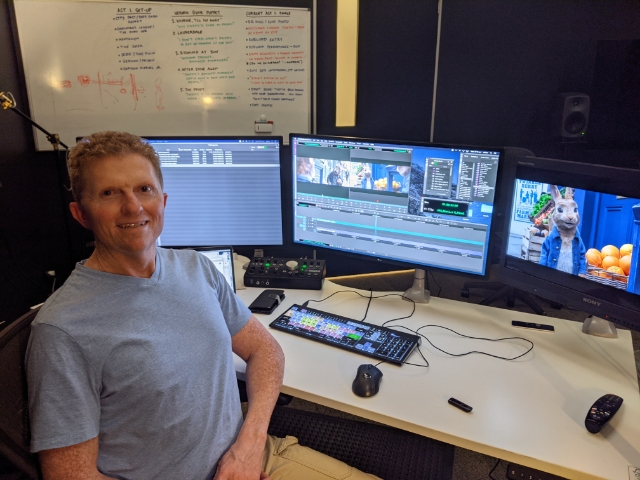 We are certainly in an era of live action/CG hybrid films–movies such as Sonic, Tom & Jerry, The One and Only Ivan and Space Jam: Legacy. Here at befores & afters, we regularly cover the VFX and animation behind films such as these, but we don’t always delve into how they are edited, that is, how does the editor piece together early storyboards and animatics, live action plates and work-in-progress effects shots to get to the final result? Where are we at with that process, and where might we get to in the future?

To answer these questions, our latest VFX Futures podcast guest is Matt Villa (ASE, ACE), the editor on Will Gluck’s Peter Rabbit 2: The Runaway. Villa, whose previous credits include such films as The Great Gatsby, Predestination, The LEGO Batman Movie and the upcoming Elvis biopic, runs down how editing worked on Peter Rabbit 2, from working early on with boards, collaborating with Animal Logic, and dealing with plates that would only later be populated with fully fleshed-out CG characters. He also discusses his Avid Media Composer toolset and gives a heads up on a few Easter Eggs and deleted scenes in the film.

Listen in at Apple Podcasts, Spotify, or in the embedded player below. Also, here’s the RSS feed.