How stunts and VFX combined to craft that intense mauling scene in ‘Army of the Dead’.

There are several shocking moments in Zack Synder’s Army of the Dead, not the least of which comes when Valentine the zombie tiger decides to maul the character Martin (Garret Dillahunt) to death, notably, by ripping his face off.

To orchestrate that moment required an intricate on set performance with stand-in stunties, stuffies, the actor and then a complex set of visual effects overseen by production visual effects supervisor Marcus Taormina, and Framestore. Here’s how they did it.

Framestore looked to several pieces of reference for the CG Valentine. One source was a tiger from Big Cat Rescue Florida called Sapphire. Other sources, to match the more ‘decayed’ and bloody look required, were actual dead or decaying tigers. “They wanted a more decayed than a fleshy, bloody creature, because she had been bitten a long time ago,” describes Framestore visual effects supervisor Robert Winter, who supervised VFX at the studio for the film alongside Joao Sita. “I think that was a really good decision because it felt with the tone of the film and the texture of the film to have something that looked like really wet, red blood on that white fur would have stood out too much.” 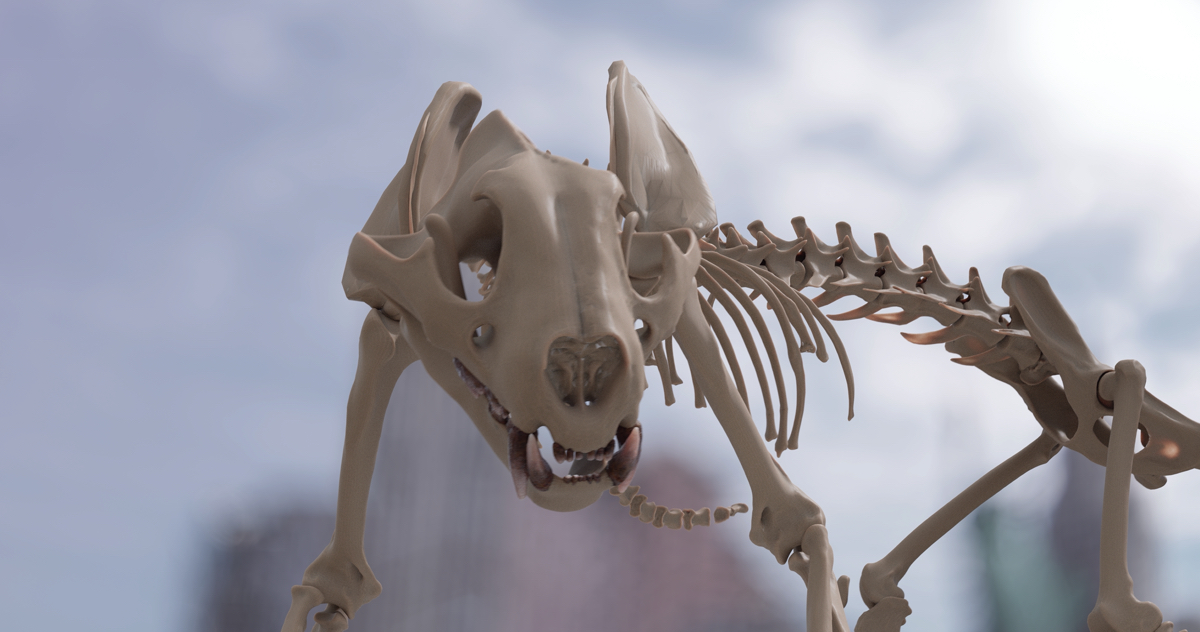 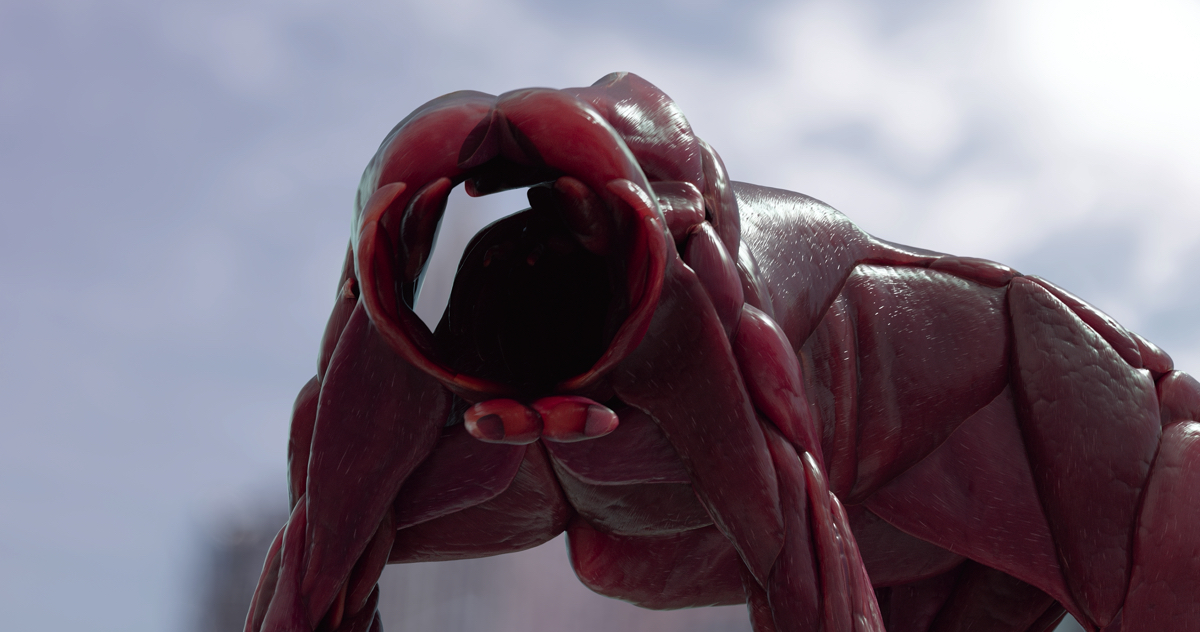 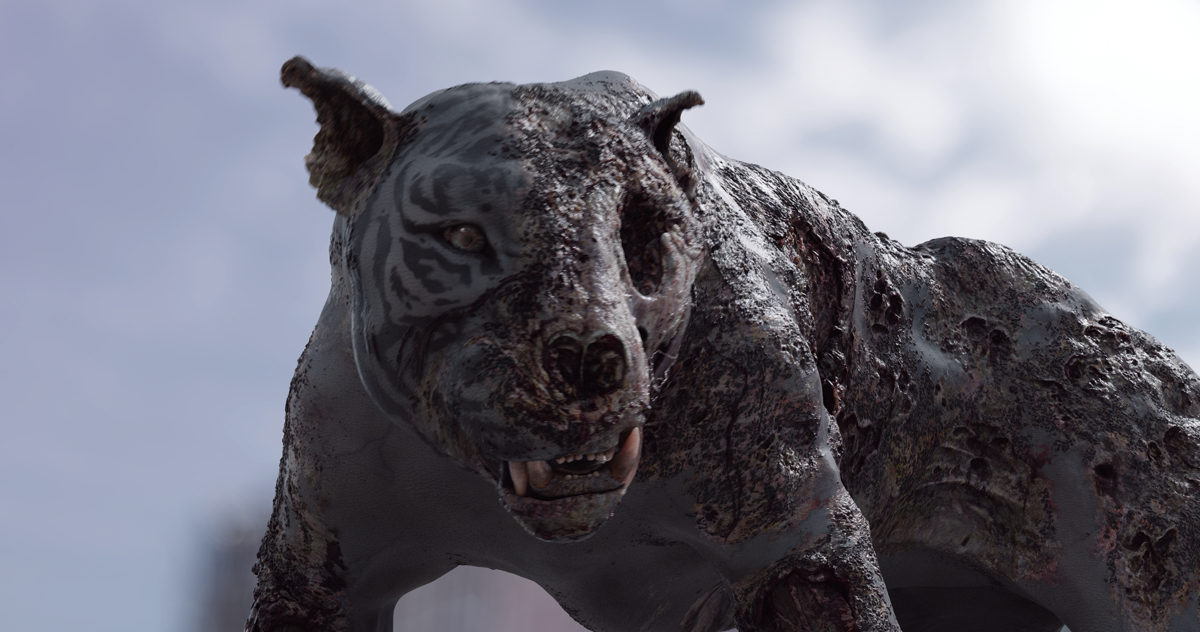 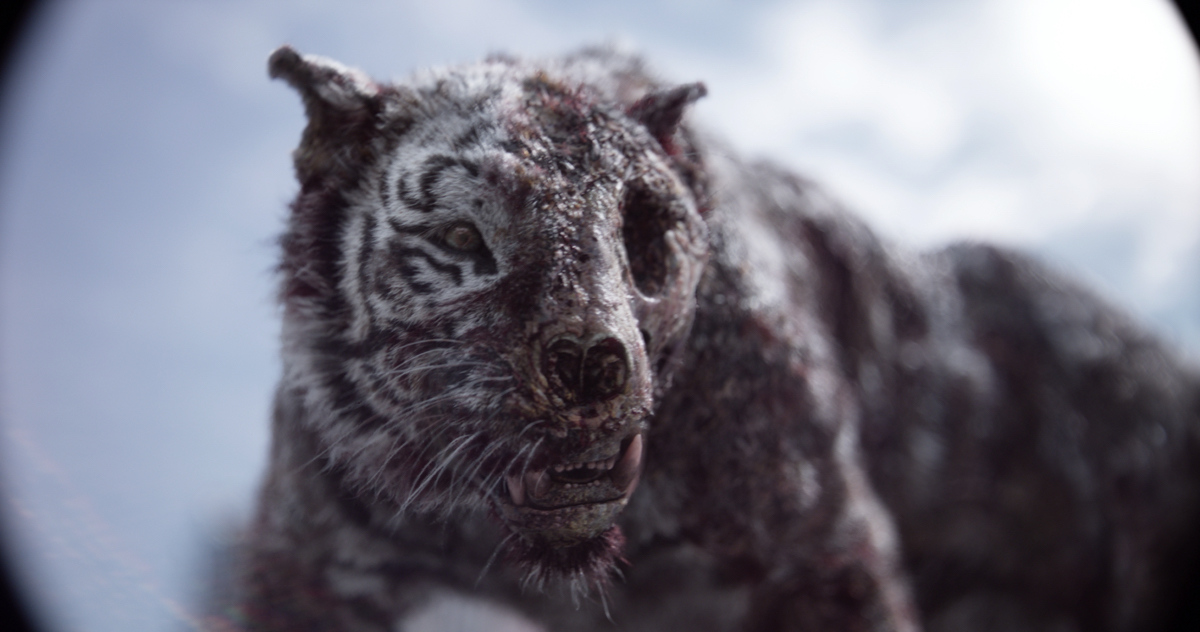 “We spent a lot of time focusing on how to layer the anatomy to recreate that decay so that it wasn’t just modeling a hole into the character and putting a couple of bones in there,” adds Winter. “We really did think of it from inside out and layering those things for the areas that were exposed.”

Interestingly, when they began working through the fascia, muscle, skin and fur of Valentine, Framestore realized that removing leg muscles on the zombie tiger initially made it appear a little unusual in terms of the performance.

“We had some early art that had more muscle removed, more exposed bone, particularly in the legs,” says Winter. “We actually added some of that back so she could still have strong poses and look strong and not look weak because we found that you could very quickly get to something that looks odd and crippled, or unable to perform what she needed to do with very strong physical dominance.”

The intense action was choreographed by stunt co-ordinator Damon Caro, as Marcus Taormina describes. “We needed a lot of very violent action that would lend itself to a lot of wire rigs. And then we knew we wanted to have a representation of Valentine there for the interaction. We had our stunt performer in there, who goes by Spider, he was amazing because he dropped in to Valentine. He was a representation of Valentine, not just, ‘Okay, I’m going to stand up and I’m going to this.’ He really wanted to understand the character.”

Wearing greenscreen and using a greenscreen stuffie tiger head that could be separately pupetteered with an opening jaw, the stunt performer would grab Dillahunt’s legs and drag him around like, as Taormina calls it, a ‘rag doll.’

“When Garrett kicks Valentine,” continues Taormina, “and Valentine shakes her head, that’s actually keyed off of what Spider did on the day, so Garrett actually did connect with the puppeteering head, and Spider just shook the head a little bit. And we thought it was such a great moment because it just worked there, and it was like, ‘Valentine’s getting pissed off.’”

After the plates were filmed, Framestore blocked in their CG tiger for a first pass. This immediately presented many questions for the team, notes Winter. “You ask things like, ‘Was the stunt person doing this as a biped? If they stood up, are they taller than our character?’ It was a technical process of going through and going, ‘Okay, these are our challenges for how they shot it, how they choreographed the stunts and how we’re going to be trying to integrate this tiger and make it look like there’s a connection there.’”

VFX artists ‘reverse-engineered’ the mauling based on the on-set performance. Occasionally Framestore would augment the legs and body of the Martin character to suit the frenetic tiger action. “That enabled us to go, ‘Let’s bend the knee a little, put it in her mouth, have it extend,’” says Winter.

The most shocking moment in the sequence sees Valentine grasp onto Martin’s head. “It’s a very impactful moment,” comments Taormina. “You’re like, ‘Yes! This guy was such a dick.’ It’s such a great beat and it really works. Zack basically said, ‘The best way to describe it is Valentine grabs a watermelon and squeezes it and it just explodes.’ That was the download I gave to Bob Winter, and I was like, ’It needs to be super gory. It needs to be that moment where you go, ‘Oh my god, are they going to show this? Oh my god, they showed it.'”