Also, a look at the New York chopper and truck rescue scenes in ‘The Falcon and the Winter Soldier’.

Amongst the dynamic visual effects shots that Sony Pictures Imageworks delivered for the finale episode of The Falcon and the Winter Soldier were ones featuring the new Falcon suit, including the larger and state-of-the-art wings.

Here, Imageworks visual effects supervisor Chris Waegner describes how those wings were deployed, along with breaking down how the aerial fight battle, helicopter rescue and construction site pit scenes were handled in that episode. 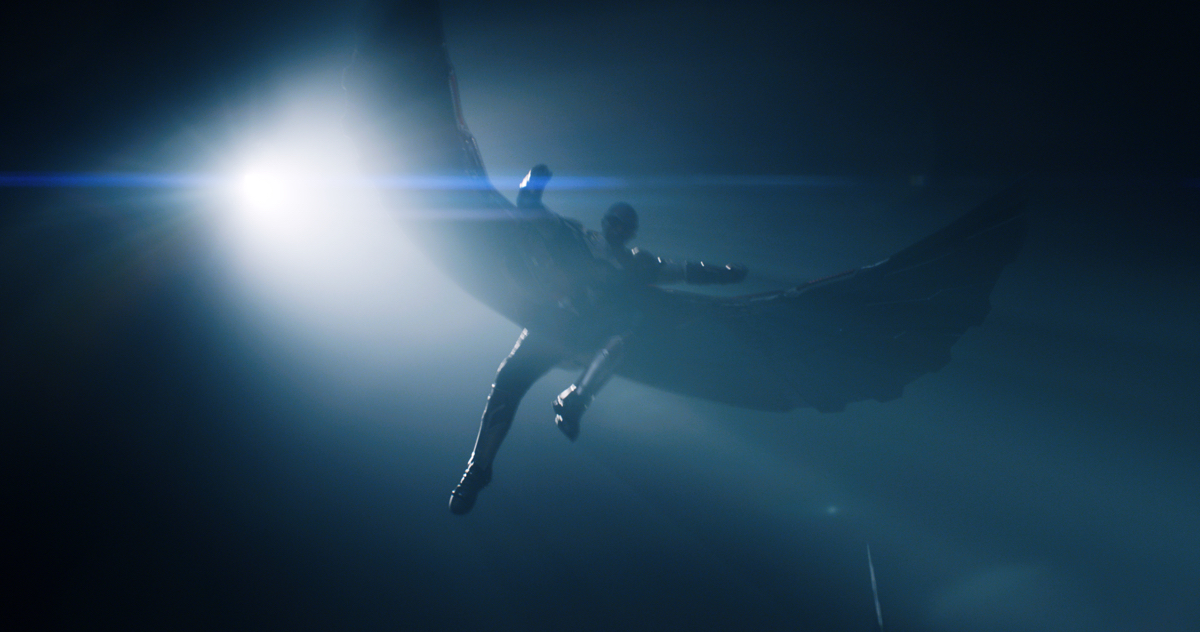 If you look at the previous incarnations of Falcon’s wings, they tend to have more of a military-type style design to them, lots of carbon fibre, lots of hinges that are exposed, things like that. And this new wing design, because it’s a new suit, he’s becoming Captain Falcon, this is a much more state-of-the-art, carbon fibre weave. It’s not necessarily scratched up, abused carbon fibre. It’s a cleaner brand new suit. And that was something the filmmakers really wanted us to pay attention to. So there’s a lot of iterations in design that stemmed or began with some artwork supplied by Marvel.

With some of the test shots of the wings that were done, the folding up of them was done at a certain speed. But then you get the plate photography and you realize these wings need to fold up at double the speed. You don’t have the time for that kind of slow articulation. Or the exact opposite ends up happening in cases of shots, where all of a sudden the shot is a slow-motion shot, and things that may have been hidden with motion blur, because they do have to articulate and fold back on top of themselves, like a Transformer in slow-motion. You’re scratching your head, saying, ‘Oh, well, we never really noticed that the fold has a bit of a rotation to here. It needs to have more of a linear transition translation to it.’ 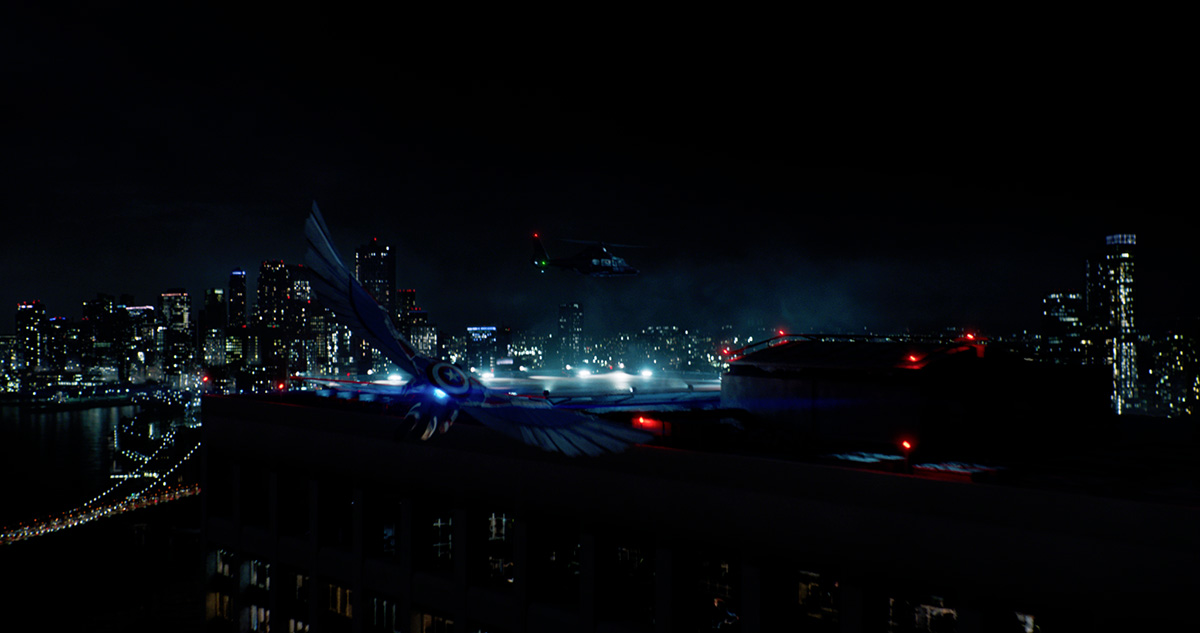 At Imageworks we created a digital New York City and its shorelines. We referenced detailed satellite imagery and modern-day street maps. And then what we ended up doing was we wrote a proprietary system at SPI, which accessed our vast model library. What it did was scatters the instances around all four New York boroughs. It accurately matches each building’s footprint and its corresponding height. And that was basically done to replicate the iconic skylines of New York City.

The next step was to go in, enhance it with flora, trees, bushes, street-level set dressings, detailed rooftops with air conditioning units, things like that. And then, for when they’re on the ground, we had to do traffic and local watercraft, digital crowds, and the bridges. It provides the filmmakers with vast flexibility in their storytelling since this new digital environment can be viewed from not only any direction, but any altitude—there’s shots where Falcon is skimming the water and there’s shots where he’s high above the city. That flexibility also granted us the freedom to create new and exciting shots, long after principal photography had completed. 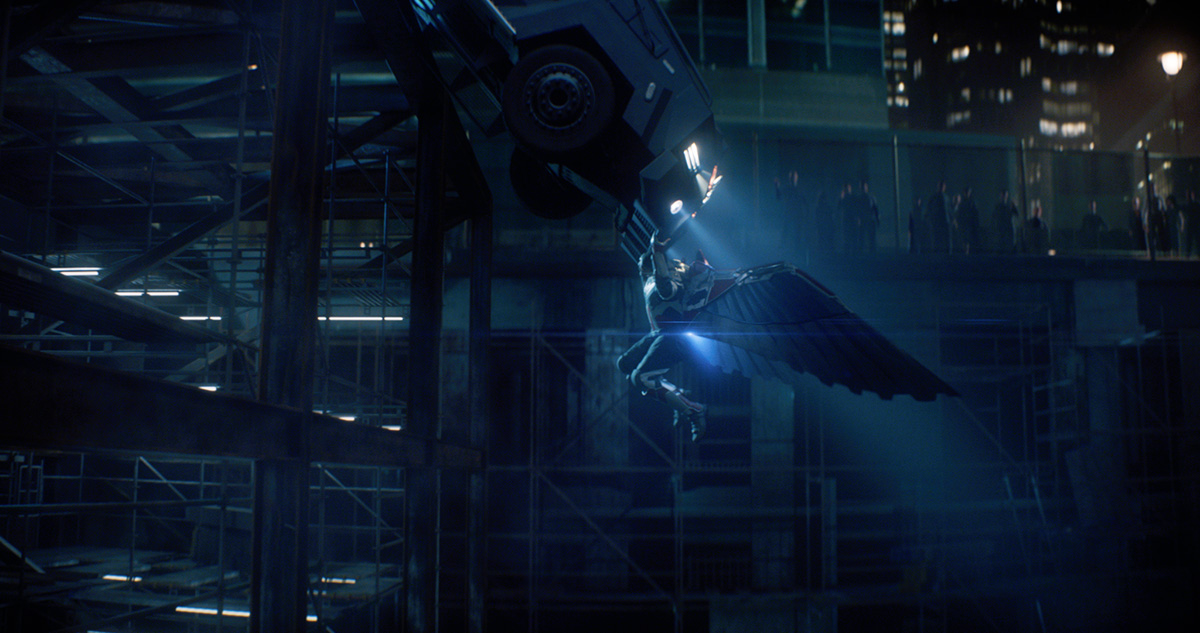 We knew that entire location would need to be digital. So not only the street level we built digitally, but we also built that whole construction pit digitally. We started off with extensive photogrammetry and extensive LIDAR coverage of all the movie sets and the whole surrounding locations. And the real reason we were doing that is because we had to create, again, creativity or flexible freedoms for the filmmakers, just to be able to change shots.

A lot of times, we changed the entire depth of the construction pit on a per shot basis, to provide a heightened sense of danger and help facilitate the stunts. When the truck is up there, the practical set was never as tall as that, but it was all giant set extensions.

One Reply to “How Imageworks gave Falcon new wings”