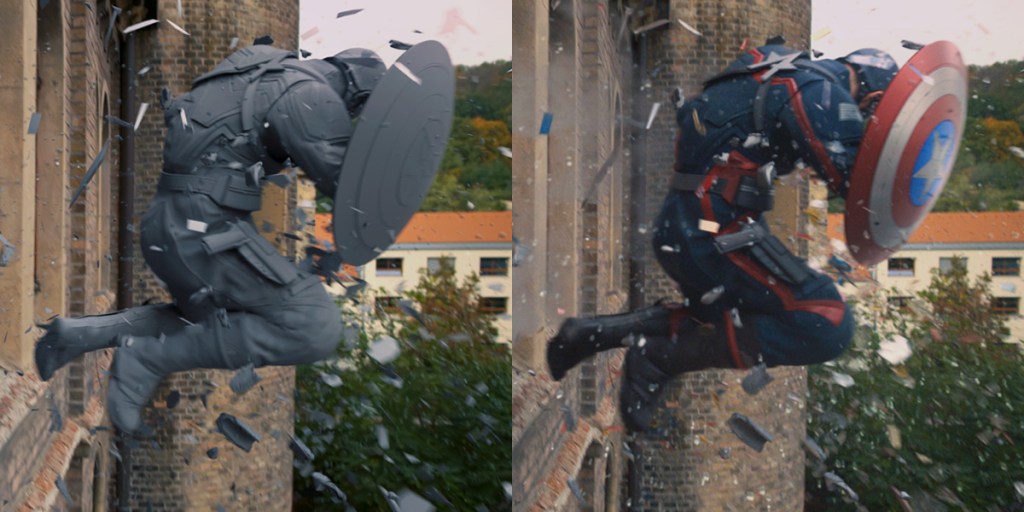 Costume fixes, a bloody (and often CG) shield, and shots you didn’t even know were VFX.

There are some massive visual effects sequences in Disney+’s The Falcon and the Winter Soldier, such as Falcon’s canyon chase and the final helicopter rescue.

But alongside these big VFX shots are a ton of ‘invisible’ effects moments, key to telling the story of the characters Sam Wilson, Bucky Barnes and John Walker, as well as the Flash-Smashers.

Here, members of the show visual effects team detail several VFX moments you may have missed: the costume fixes for Sam’s new suit, the times when the shield had to be a CG (and bloodied) creation, plus one moment when the entire interior of a truck was replaced.

In one of the ‘if-it-wasn’t-pointed-out-you-may-have-missed-it’ visual effect, aspects of Sam’s suit seen in the finale episode—in which he is now Captain America—required digital intervention.

This related mostly to his cowl, which, owing to its particular design and the way it sat around the actor’s face, would sometimes have noticeable bends and creases. Visual effects artists removed these to make it a seamless piece of costume, in fact, one that might not actually be possible in real life, as production visual effects supervisor Eric Leven explains.

“The visual development team at Marvel was designing the look of Falcon, or of ‘Captain America’ here. It’s obviously very important because this is the star of your show, and he has roots from the books and what has been drawn before, and so they wanted a very specific-looking outfit. It was very specific as to where the cowl comes to on the mouth.”

“I remember talking to Michael Crow, the costume designer,” continues Leven, “and he said that he mentioned to them that what they’re looking for is not really possible. You want a material that doesn’t feel stretchy, like rubber, it’s not spandex, it’s not too close to the mouth, it’s not too far away from the mouth, and you’re basically setting yourself in a place where you’re making it as difficult and impossible as possible.”

Both Weta Digital and Sony Pictures Imageworks carried out a number of costume enhancements. In episode 6, Imageworks handled them particularly for scenes of Sam in the new suit on ground level while talking to members of the press.

“What we ended up doing a lot of times,” outlines Imageworks visual effects supervisor Chris Waegner, “was either some paint work, or a lot of times we’d end up roto-mating the character in such a way that we could basically mix back in our digital suit onto his face, depending on where those folds were.”

The shield: a subtle (and sometimes) CG character

When Walker takes on Bucky and Sam in the warehouse fight earlier in the series, there’s a shot in which Sam eventually picks up the shield and wipes off the blood on it. This was all completely synthetic.

“It’s a CG shield with CG blood,” details Leven. “The props department, they were hesitant to put blood on the shield, because the shield is supposed to be pristine, and they walk around with a chamois all the time to clean it.”

Indeed, Leven adds that “the shield nine times out of ten was CG in that sequence,” and there were plenty of other times in the show when the shield needed to be digital. Partly that was because it needed to do incredible feats such as boomerang back to its thrower, as well as maintaining a consistent look and feel for the shield.

Sony Pictures Imageworks was one of the VFX vendors responsible for delivering a CG shield in particular scenes (the studio worked on a number of episode 6 action sequences—check back at b&a for more on these soon). Chris Waegner notes the shield work was a lot harder than most people might think.

“That shield has a lot of interesting bevels and angles to it,” he says. “So it catches light in ways that cinematically you don’t expect it to catch light. It catches that light normally when say the Falcon’s holding the shield. But when the shield is flying at a high rate of speed with motion blur, you start getting streaks, or you start getting reflections that you don’t anticipate. And it’s because of the specular response to that anodized shield, which means it does pose quite a few challenges, really trying to make that shield fit into an action plate.”

Another challenge of any CG shield insertion was the fact that these VFX shots would typically be book-ended by live-action plates. Meaning, the visual effects vendors had to match exactly to the practical shield, which formed a large part of the stunt work.

“That gives you great photo reference,” states Waegner. “We got great still-frame reference that we could refer to. But it is the type of thing that I think a lot of people underestimate as far as making it fit consistently from shot to shot to shot when you’re putting a digital shield in the middle of those shots.”

“The shield definitely has its own language, its own behaviour,” comments Graeme Marshall, visual effects producer at Rodeo FX, which worked on, among other sequences, the Germany truck chase sequence in which the shield gets thrown about (more on this coming to b&a, too). “They had one hero shield, that was the shield that John Walker would hold when there was shots with dialogue with him holding a shield. And then had a whole bunch of stunt shields.”

When you need to replace the inside of a truck

That truck chase also featured another effect by Rodeo FX that you may have missed; a complete interior environment replacement. This is for the moment Bucky confronts Karli amongst crates of vaccines.

“That’s a full CG environment inside the truck,” advises Rodeo FX visual effects supervisor Sebastien Francoeur. “The original plate was brown cardboard boxes with stickers, regular stuff. We were asked to build containers with vaccines, where they could keep then frozen.

“Originally we were just going to replace the boxes, but then we realized our CG truck [which Rodeo had built for the many action scenes in the sequence — more on this soon at b&a] was just working perfectly for the interior as well. So, all of it, except Karli, who is live-action, is a full-CG shot. It’s not something you notice, but that’s a full CG environment.”