‘How can I make something rendered look more like an illustration?’

At one point early on in the making of Mike Rianda’s The Mitchells vs. the Machines, streaming this week on Netflix, production designer and lead character designer Lindsey Olivares took it upon herself to create a test for how the 3D-animated feature might also incorporate a 2D and illustrative look.

The result was a short moving clip, done before Sony Pictures Imageworks was on board to craft the 3D animation, but it set the tone for what was to come. Here, befores & afters asked Olivares about that test and the other aspects of the design work for the film that gave it a unique visual language.

b&a: I’ve seen that test you were responsible for showing Rick Mitchell as a 3D character but with that 2D illustrative look—how did that test come about?

Lindsey Olivares: The test that was in the early days. I started on the project remotely. I was living in the middle of nowhere with my grandmother at the time. That was the catalyst for Mike finding my work. He found these gifs of me and my grandmother at home in a very human, observed space. And so at that point, I’d visit in and out of the studio.

I was working with a character modeller and we were testing the character designs in 3D. I was excited to do that, but we were also at this really early point where it was a lot of start and stop. It was at a point where they were going to put the film on hold for a bit. Well we didn’t have the resources. But I thought, ‘Can we test this out? Let’s try doing it.’

My background is, I studied computer animation at Ringling College of Art and Design. I got into animation, I think like a lot of people, because I loved to draw and I assumed I wanted to be a character animator. And then I quickly learned that I was much more of a designer, illustrator, but I really loved learning that process in school, got to make a thesis film, and then that started kind of exploring, ‘Oh, how can I make something rendered look more like an illustration or more 2D or play around with stuff like that?’

@lindseydraws knew we wanted to make "a love letter to our imperfect human world"- so we tried to reflect our characters humanity and imperfections in every frame.

This got us all SO hyped! pic.twitter.com/6CSziEXuEZ

So, at the time I did the test, I wasn’t even in the studio, I was travelling, actually, but I’d take my work with me. I just took the model, UV-ed it, painted it, put it in to test the backgrounds—just 2D through a camera in there—and started playing around with kind of comp’ing it.

My techniques were very primitive, but there’s thought behind, like, why we should do it or it could be cool? It was really exciting to start that conversation, and then evolve to the place where we had Imageworks.

b&a: One of the interesting things I’ve sometimes found is that sometimes you see, in the art of book, beautiful illustrations that, when translated on the screen with 3D characters, don’t always come through as the same ‘feeling’ as the artwork. This film, I have to say—because there was that keeping of the 2D sensibility—seemed to keep so much more of the original art. Can you talk a little about the process that was followed taking your concepts through to Imageworks’ work?

Lindsey Olivares: When we were still in the early development phase, before we were working with Imageworks, before we were green lit, we would have visdev modellers. And one of the ones who was with us for a while, who really helped us, Christopher Wright, and he was my character design counterpart in 3D, because my drawing style and sensibility is very 2D. I’m not form first. It’s more like silhouette, shape, it’s very drawing-based. It was really helpful to work with a 3D modeller like Chris.

From there we had a good target and then we’d go into our production models with Imageworks. So we would turn over 2D designs and then it was just a similar process, sped up. We’d figured out a lot of the translation solutions already. It was then just a quicker pace version of the same thing of drawing over it and really pushing it.

To that ‘gap’ you’re talking about, I think there’s times that something looks like it and looks good, but there’s so many little ways it can change. It goes through so many hands, which is also how things evolve and get better, but it does go through so many hands. And so you really have to keep looking at it and keep looking too at where you started and keep both. You do need to evolve and add the nuance that makes it feel like something new and get better, but also really check in with both. 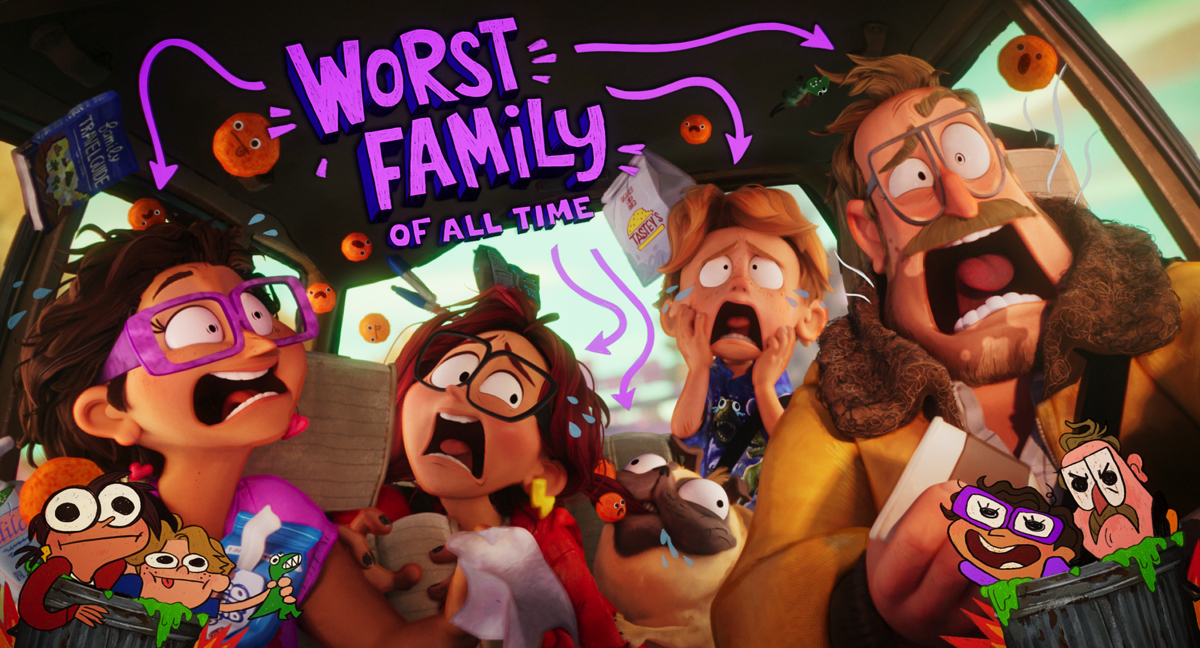 b&a: In that 3D translation, what were the things that Imageworks would be doing to add more of a 2D sensibility—the edge lines and extra things?

Lindsey Olivares: Well, it was the case that we were the project after Spider-Verse at the studio. Imageworks were also excited to keep exploring, to do, say, unconventional renders. Specifically, there’s the edge lines that are on the characters. Then there’s a lot of really great shared work of having it feeling like it’s hand-painted. 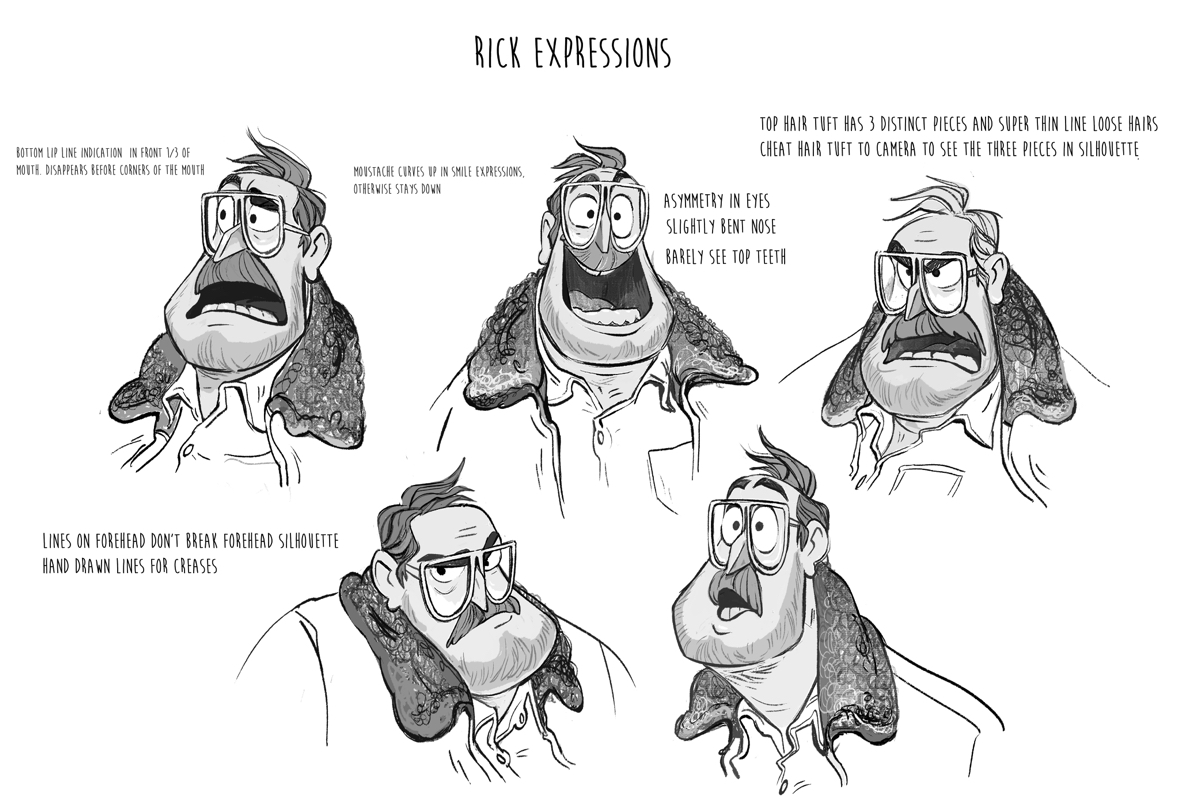 We also thought about layering market-type strokes. So, I love marker. It felt like it made sense for the character, Katie, too. She’s a filmmaker/artist-type drawing on herself and on stuff. And so marker made sense to me in terms of feeling handmade—it felt appropriate for the story.

I would do these marker swatches and give them to Imageworks. I’d give them a mix of real traditional textures, a mix of brushes I used, I think they would do their own, too.

b&a: In the film, the hybrid moments are some of my favorites, where it is showing, say a 3D character, but then there’s a 2D drawing. Did that have a name, when you went into that mode?

Lindsey Olivares: Internally we called it ‘Katie-vision’. It started with some initial board moments that had stuff like that in them. As a production designer, you look at everything holistically, and there were these ideas for these moments, but I think it was suddenly really visualized. It was a little bit of like a question mark I’ve had, how does this play? If it’s just in one moment, is it a one-off scene, say where a lot of movies might have a sequence that’s done stylistically different? Or should it be throughout the film? 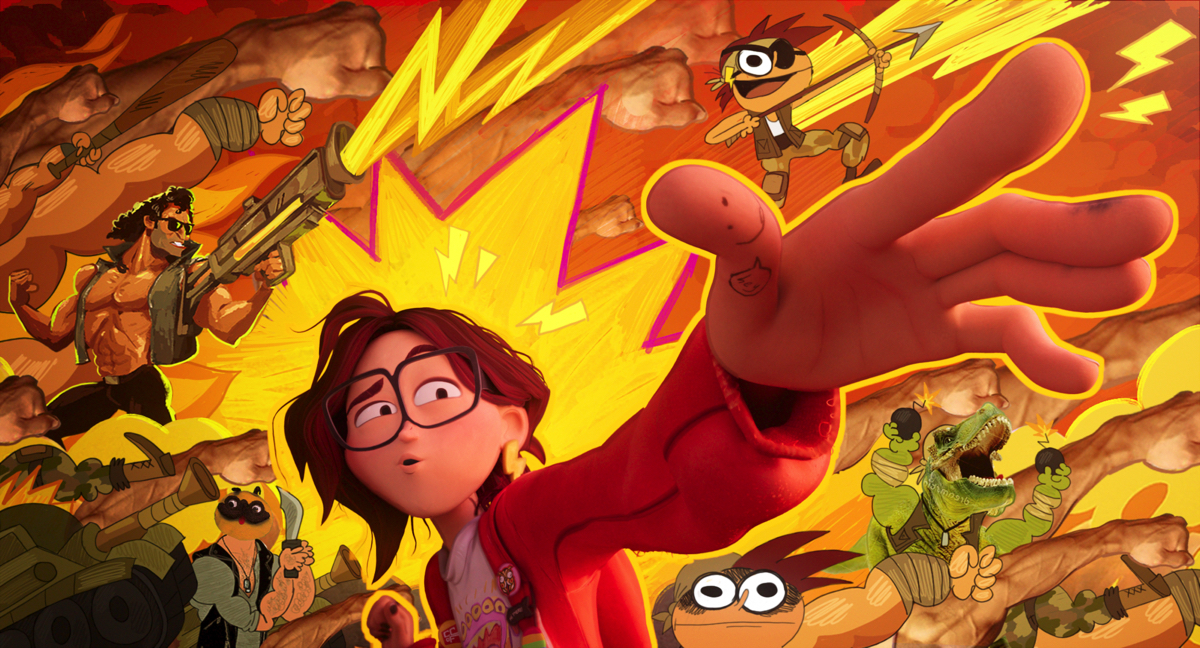 So they had some moments that were big and experimental like that in storyboards, and then we started testing it. To me it was important to make all these things mix and work together and feel natural. I wanted to track the progression, so I had this board in my office, graphing each sequence, with one graph being Katie’s goal: she gets accepted to college, whether the debt cancels or road trip to college, and then this ‘thing’ happens.

I thought, what’s our way of emphasizing that? It’s with color. So we thought, let’s make the Katie-vision thing something that we carry all the way through. It always had to be tied to a story moment or her emotion. A good example is, she’s excited to go to college and you see these smaller things following her, but they ‘die’ when her dad’s like, ‘I cancelled your plane tickets to college.’ So it’s really tracking with her emotion and we try to like lace it throughout.

b&a: I also liked when it went full-blown 2D as well, like ‘Eyes of the Pterodactyl!’.

Lindsey Olivares: They originated in different ways. All of the big ones came from story, so they were laced into it and we got to a rough layout from story and we would match that. Then there was a lot of them that we would, as shots were moving through layout animation, I’d scout out the sequence do something very rough. Ultimately it was Alice Lemma who did most of them. Lily Nishita, one of our artists, did a lot of work for some of the cards, too. Mike might do a little rough napkin, doodle type thing as well.

b&a: One thing I really wanted to ask you about was, when we’re first meeting Katie and she’s creating these films. I really loved that she was using a greenscreen and you could even see greenscreen spill!

Lindsey Olivares: I love that you noticed that because that was something that we really wanted to have. You know, some of that was me just going and making a puppet and filming it and being kind of scrappy. There was a point that I was keying out the greenscreen background and it wasn’t perfect, it was messy and had that spill. I first thought, I’ve got to re-shoot this, but then it was like, oh no, this is what’s cool, we should use all that stuff.

The whole thing with this movie is embracing imperfection. It was funnier, that it was kind of bad. What’s cool about the movie is it’s not the Instagram-y presentational version of people and families, it’s more the real or quirky kind of family.

2 Replies to “Behind the early 2D/3D test for ‘The Mitchells vs. the Machines’”