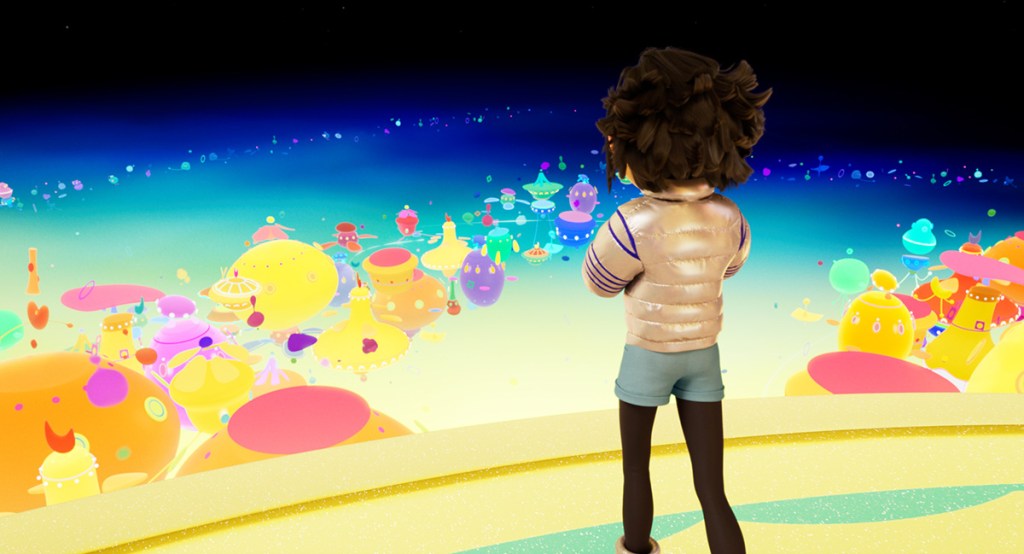 How Imageworks tackled Lunaria in ‘Over the Moon’.

At one point in Glen Keane’s Over the Moon, the director’s CG-animated feature from Pearl Studio and Netflix, the central characters visit the city of Lunaria on the moon. Its buildings and inhabitants exhibit a magical quality, including in relation to the way they emit light—essentially from within.

For Sony Pictures Imageworks, which produced the animation for the film, lighting the Lunaria environment required close collaboration with production designer Celine Desrumaux to produce that unique look. befores & afters asked Imageworks CG supervisor Clara Chan to break down how the lighting for the city was handled.

b&a: There’s a particular look and feel to that world. Can you tell me a little about the brief that was given to Imageworks for Lunaria?

Clara Chan: The clients wanted it to feel magical, and something that no one had seen before. Also, the colors were very important. It basically is an explosion of color. The Lunaria city is a mixture between gas, liquid and solid, so there’s the feeling of a material that is out of the world. We didn’t want it to feel like something that’s on Earth.

All the buildings are light sources. When everything is a light source, you have to pick and choose which is the dominant one when it comes to lighting the characters. There’s a lot of choices artists have to make, to make sure the image looks great. It doesn’t matter whether it is a green building next to the character–because sometimes you have a green and a pink and an orange all surrounding you–when there are too many colours on the character, it does not look good. So we have to say, maybe the pink one looks the best.

b&a: What sort of concepts or color keys or key frames were done specifically for the city?

Clara Chan: We got a lot of concept and draw-overs. When we first built the city, we had a lot of concept art and we’d match to those colors in that art. And then in terms of each shot, usually we do a first pass of lighting with our default building colors and lighting, and then we would show it to the production designer, Celine.

Sometimes she would specifically change the color of particular buildings to make an aesthetically pleasing image. There was a lot of back and forth working with her on that.

b&a: What were some of the very specific technical challenges of getting that specific kind of lighting?

Clara Chan: It’s not necessarily groundbreaking technology; it’s everything we have already developed, but we just had to modify slightly. So, for example, for all the buildings, we had to change them into mesh lights to make them a light source. But that’s not the only thing we do. We also want the building to look like it’s shaded, that it has some shading to it. Sometimes we have a very subtle amount of specularity and we don’t obey physical rules of refraction. Because if there’s actual gas or liquid, the refraction would be too distracting. So we keep it really simple.

So, light rays could just go straight through, and sometimes buildings have actual volumes of gas inside them. Not every building, because we don’t want all of them to look the same. So when there’s gas inside, we had to make sure the transparency looked nice. We want to see through it slightly, but not too much. And also sometimes we’d pick which part of the building to see through, maybe only around an edge.

b&a: Is the workflow at Imageworks generally Katana and Arnold for lighting? Did the ‘volume’ lighting impact on that workflow?

Clara Chan: Yes, it’s generally the same workflow, but we did improve our de-noising function. So, because of the volume and gas and light bouncing around, a lot of times we got a lot of noise. So our de-noising technique was improved so much that we didn’t have to spend too much time on the actual render.

b&a: The shots on the moon surface, away from Lunaria, I also really liked because it felt like that harsh light you get on the moon from just have one point light, the sun. What kind of challenges did that pose?

Clara Chan: We had to really control ourselves not to add too much light because sometimes we tended to want to see more and lift all the dark areas, but we had really specific direction from Celine that the sun is your only source. And when there is a glowy Lunarian, for example, Gobi, then Gobi will be our source. We had to also, in animation, make sure Gobi was in a good location so that he can light up Fei Fei when they’re together. We basically had to do the sequence lighting and look at the whole sequence when we placed the sunlight.

b&a: Finally, one thing I wanted to ask you about is Fei Fei’s puffy jacket, which is silver. I love the creases in it. I wondered when Imageworks received concepts and started modelling this thing and then dealing with it lighting, did you go, ‘Oh my God, it’s a reflective puffy jacket with creases.’ Did that pose any particular problems?

Clara Chan: It has certain issues, yes. Because if we make it totally reflective, sometimes it would feel very contrasty, especially on the moon, there are really dark shadows. It’s very dependent on what is surrounding it to make it look nice. So if the environment itself is too dark, then her jacket will not look nice because it’s just reflecting darkness. So we just have to make the material of her jacket be flexible, so that we have the control when we need it, to change how the reflection looks.