Digital Domain on its morphing creature for ‘The Twilight Zone’.

Episode 7 of season 2 of The Twilight Zone features an invasion where aliens transform themselves into deceased loved ones, complete with memories and behaviors. The story takes place in a suburban home where a couple is trying to cope with the loss of their teenage daughter, Mags.

Behind the visual effects work for the creature was Digital Domain, led by visual effects supervisor Mitch Drain. Here, he runs down, step-by-step, how a shape-shifting alien was constructed.

This was a very unique design challenge in that the creature, as scripted, had to be very amorphous and in a constant state of evolution. All the while, flashes of semi-recognizable shapes and images would be revealed. We were blessed to have an extremely creative and collaborative partner in the client-side supervisor, Mark Savela. He, along with myself and our creature designer Chris Nichols, discussed the many aspects of what would be required and the backstory of how these alien creatures, affectionately dubbed the “MagsThing” might go about replicating human beings.

As the design process evolved, we understood that a baseline creature was needed to build these other elements upon. This would provide clarity for the viewer and allow for a performance to show through the chaos. We were hoping to capture some of the energy of DeepDream image processing with a full CG character. DeepDream renders have a frenetic, painterly quality that uses 2D image pattern recognition to replace photography with random images that match the designated patterns. But instead of actually using DeepDream ourselves, we decided to replicate some of our favorite elements internally.

We started with a Tardigrade-type creature that was set up for an animated level of transparency and constantly evolving form. In the show, the creature is gathering information to replicate a human form and during this process begins to “learn” how to mimic the character of Mags. The FX team created a network of organs and bones that can be glimpsed in the creature’s transparent areas. A kaleidoscopic pattern of animated colors and organic shapes, depicted as flashes, was also designed to show the learning process taking place within the creature. 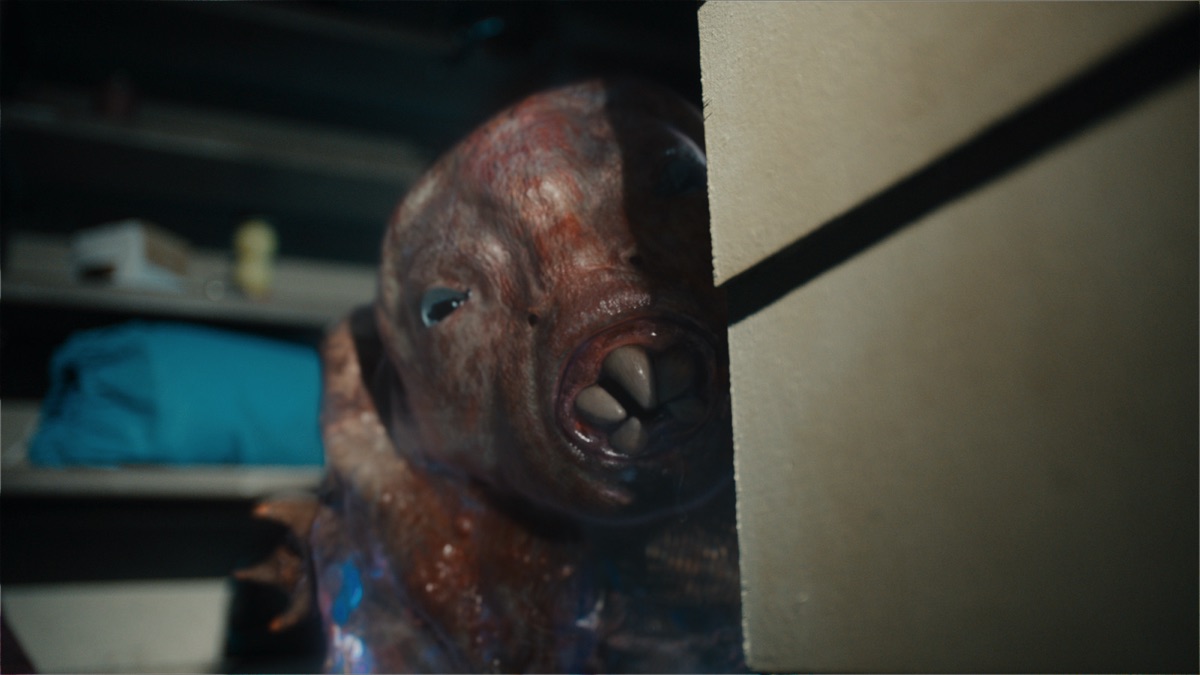 We were provided with both clean plates and plates of the actress performing the ‘MagsThing’ action as a starting point. It’s important to have something for the actors to interact with and it really helped us create a more natural sense of camera movement. The performance also gave us cues as to movement and the stages of transformation from creature to Mags.

The models for the creature were created in Maya and we used a full-body scan of the actress to create our photoreal digi-double. The digi-double was essential as it allowed us to control the performance and show Mags in pure energy form later in the episode. And while it was convincing enough to have been used as a standalone character, the digi-double was mostly used for the transformation passes and whenever something was needed beyond what the plates provided. The CG team was headed by Kazuki Takahashi.

It was important to the filmmakers to show the inner struggle of the creature throughout the transformation. Along with the animation, which had the creature bending over and retching much as a human would, the compositors would add and subtract skip frames, an old optical technique, that introduces an inhuman, stuttering motion. Adding motion blur to this stutter gave it a realistic, photographic quality. Coupled with the sometimes violent growth of branches and bubbling surface textures created by the FX team, we were able to invoke an otherworldly chaos to the transformation.

In the early concept stages, it was decided that the “MagsThing” would ingest DNA from its environment and process the information it needed. The actress’ performance provided inspiration and key movements, though we also animated as well according to the needs and actions of our creature. We did this through multiple sets of animation. One pass was for the creature itself. For more complex shots, up to three sets of animation were created. Usually, it is undesirable to allow animations to interpenetrate, but in this case, by layering the animations over each other, and allowing the intersections to happen organically, we were able to communicate an out-of-control sense and not reveal the final form of the creature until the last moment of the transformation. The animation of the creature, as well as the Mags digi-double, was supervised by Arda Uysal. 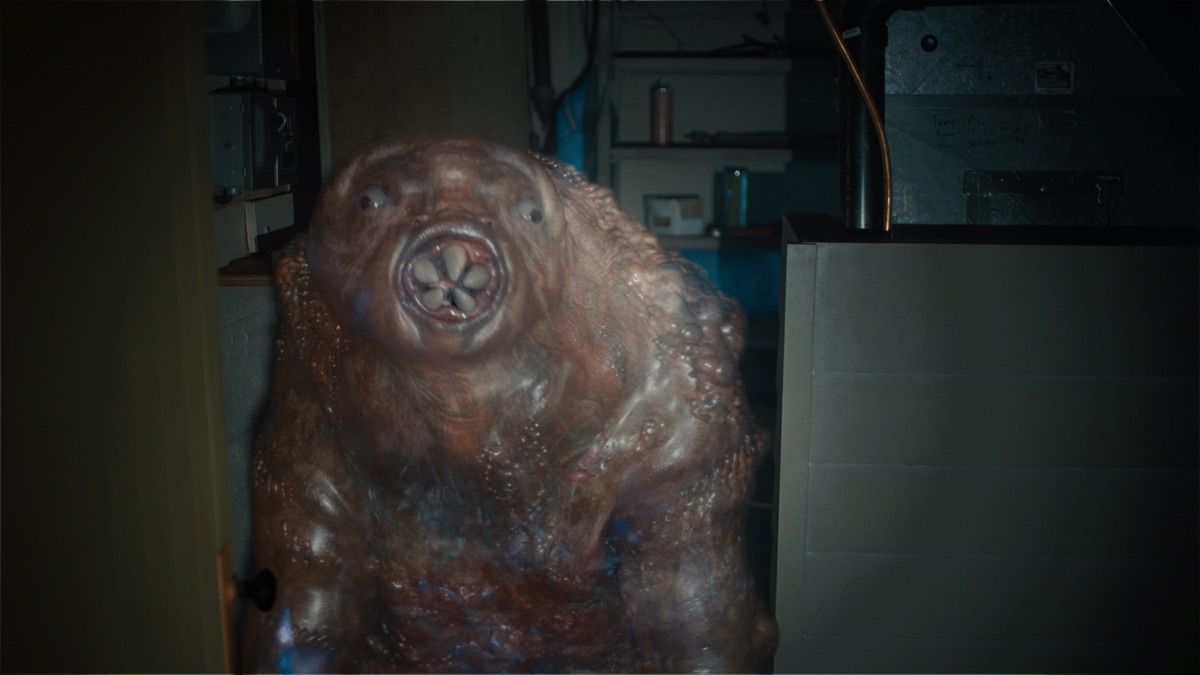 Finding the right balance between creature and human was one of the most challenging aspects of the animation. We worked closely with Mark and the filmmakers to get a balance in the timings of the transitions. For example, when we first meet the MagsThing, it is 98% creature. Mags herself only flashes into view for a frame or two. A few shots later, we see the thing but Mags’s head appears in full view, but only in a burst. By the middle of the sequence, we may see 50% creature and 50% Mags. These moments are important to the story because, to the parents’ horror, they needed to recognize a flicker of Mags in the creature. The gap continues to shrink until the transformation is complete and we reach 100% Mags.

We used multiple passes of character animation, FX animation and creative compositing to create a visual where the creature would diminish and give away to a growing digidouble. Jeremy Hampton was responsible for creating the trembling, undulating boiling effect that ran throughout the creature transformation as well as branch-like appendages that grow and recede as the creature is learning how to appear human. In the early stages of the transformation, the Mags character can momentarily be seen attempting to break through. These effects were created by basically morphing an animation pass of the Mags digidouble in and out of the creature quickly, like a burst of energy that dissipates almost immediately. The compositing team, led by Paul Chapman, did an excellent job incorporating bits of the actress’s performance with the many passes of flashing patterns, bones and multiple animation, FX and texture passes. We were continually updating and improving the creature throughout production for about a 6-month period.

There really is no single element or pass that ‘made’ these shots successful. I could point to any one element and see that it could stand on its own as a boundary-pushing visual effect. The shaders that were developed by the CG team to create the animating levels of transparency and multiple textures were used to greatest effect by the compositors.

The FX team excelled in creating visually interesting elements of x-ray-like skeletal structures and violently boiling surface elements. The animation team took the actress’s performance to another level by throwing out the book on traditional movement and creating something completely new. As the development of this creature and its transformation evolved, new exciting passes kept coming off the render farm. With every new element, the reaction was “Wow! That’s so cool, where can we incorporate it?” The Mags creature truly was the product of the collaboration of multiple artists from multiple disciplines.

One Reply to “How do you make a shape-shifting alien?”