When Star Trek: Picard visual effects supervisor Jason Zimmerman first heard that the CBS All Acess series would be featuring the return of the Borg cube ship, his first reaction was, he says, “extreme anxiety and a panic attack.”

“Whenever you read in a script something like ‘Borg cube’ or ‘Enterprise’, you really do freak out at first,” Zimmerman told befores & afters. “Luckily, our production designer was Todd Cherniawsky and he’s very, very well-versed in visual effects, and he knows what we need. He and concept artist Johnny Eaves got started on the cube, and we also had our CG modelers in the art department right there with production.”

Those modelers were tasked with adding an insane amount of detail into the three-kilometer longship. Usually, with such a large asset, certain areas can be specifically ‘plussed’ for the camera, but in the case of the Borg cube it turned out that “the whole thing” needed focus on, reveals Zimmerman. “We just saw it from so many different angles that we ended up having to continually hero out the different texture areas.”

Ultimately, modeling started with Pixomondo LA before being handed off to DNEG LA and also being shared with Ghost VFX in Denmark for various shots throughout the series.

Getting to the detail

Of course, the Borg cube is not a new ship in the Star Trek universe, and that meant the visual effects teams had a wealth of past cube content to use as a reference for the Picard build. The cube has been realized previously as both a miniature and a completely CG asset.

“What’s nice about models and miniatures is that they have real practical textures which look so great,” states Zimmerman. “So we started there and we really wanted to pay homage to what came before us and look at what they had done. I can’t tell you how many times I googled ‘Borg cube.’”

Given its size and the intricate detail on the Borg cube, Zimmerman was also conscious of the need to sell its scale in individual shots. “Plus, it’s in space,” the VFX supervisor notes. “Which has literally nothing near it to reference how big it actually is. So the challenge was how compose an image to convey that this cube is kilometers long, and how to compare that to other ships.”

“It was basically a lot of, well, let’s put a ship in the foreground and we see a person in the ship – great – and now let’s put another ship halfway between us. Slowing things down and using scale cues really helped.”

When asked if those cues could include the use of atmosphere – a much-used effects technique to help sell scale, Zimmerman replies that, “Well, you’re definitely not supposed to. If you look at space reference and NASA footage, there is no atmosphere in space. The lighting is very clean. It’s almost the cleanest, most perfect, most bright light you’ve ever seen. But, we did use atmosphere to an extent. You just have to be careful because it’s not really what’s actually there.” 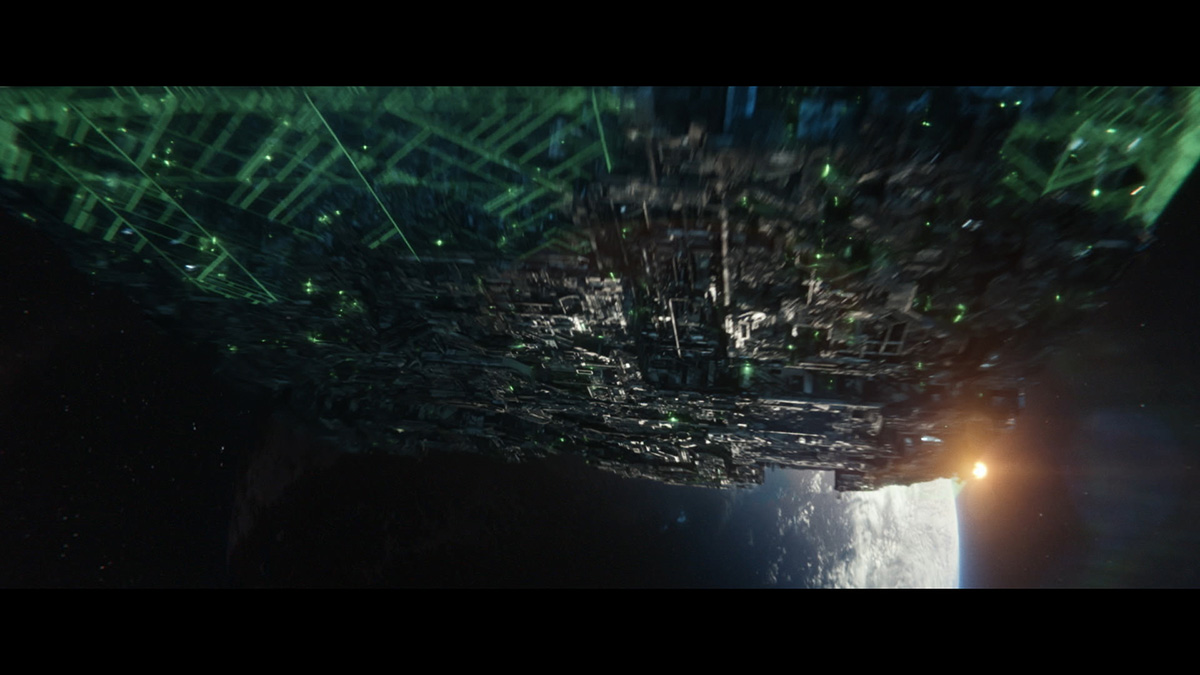 Inside the Borg cube, selling the vastness was also an issue. Minimal live-action sets with bluescreen were extended by the VFX vendors to show how deep the interior went. Atmosphere was certainly something utilized here, as were completely CG areas for ship fly-throughs.

If having to tackle the Borg cube in CG wasn’t enough, Zimmerman’s anxiousness was immediately exacerbated when he read the script for episodes 9 and 10 of Picard.

“The script said, ‘A giant orchid comes into the atmosphere and takes down the cube’,” he relates. “I was, like, how are we going to do this? What does this look like? I started asking people and they said, ‘Well, it’s a big flower.’”

“I was concerned about this moment a lot,” admits Zimmerman. “Everybody knows what an orchid looks like, but what does it look like when it’s big enough to take down the Borg cube, and how does it behave and how does it move in space? We had a lot to figure out.”

What helped make the final look for the orchids as interesting and convincing as possible, says Zimmerman, were extra details added by Ghost VFX to make the organic creature feel synthetic and bio-mechanical and to give the flower ‘character’. “A lot of times scale can be told with speed. The slower it is, the larger it feels. We definitely utilized that a lot in those sequences.”

The giant orchids were just one of several enormous challenges in this first series of Picard for the VFX crew, and one that added to the complexity of the final episode space scenes and action. “I mean, the Borg cube was tough enough to get the scale right,” concludes Zimmerman, “but then it had to be taken down by a flower, which is just a complete mind blowing situation!”