How the practical effect formed part of the film’s classic Colosseum scene.

Sometimes I think the most successful effects shots in films are where multiple techniques get used. That was the case with Gladiator’s famous tiger scene. Moreover, the one where Maximus (Russell Crowe) engages with Tigris of Gaul, who brings with him a number of tigers.

The sequence relied partly on real tigers that were, for a couple of shots, filmed against a bluescreen and composited by Mill Film to appear closer to the characters for a number of ‘near misses’. In addition, a prosthetic tiger was utilized for a few interactive shots, particularly when it launches on top of Maximus.

“Ridley was tossing it over about how we would come up with this tiger fight,”. Recalls Neil Corbould, Gladiator’s special and prosthetics effects supervisor, who talked to befores & afters on the film’s 20th anniversary. “Obviously they had real tamed tigers, but for tame tigers they were still pretty wild. So, very early on, Ridley said, ‘I think we should have a back-up and make a dummy tiger.’” 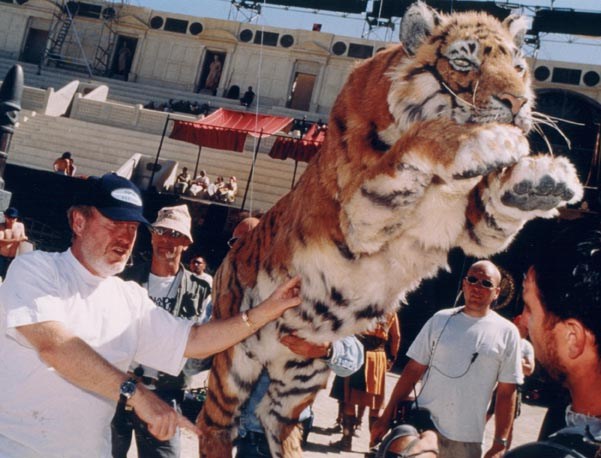 Corbould commissioned Animated Extras to build the dummy tiger. It began as a clay sculpt which was then cast out in foam over a jointed steel armature. With a rig inside to take the blade and articulated limbs, plus a covering of fur.

“We literally carried it around the set for a couple of weeks,” says Corbould. “It had its own little trolley. It was just right for shots where Russell was on the ground rolling around and pushing it away.”

The dummy was deliberately low-tech and didn’t contain any animatronics for eye or lip movements. “It was literally thrown at Russell and he would grab hold and roll on the floor with it,” details Corbould. “It was quite comical to watch, but obviously then you see it all cut together it was quite good for what it was.”