Behind the scenes of the practical, puppeteering, and digital effects in ‘Tales from the Loop’.

When visual effects producer Andrea Knoll began working on Tales from the Loop, the TV series adaptation of the art book by Simon Stålenhag, the principal requirement from a VFX point of view was that everything created for the Amazon Prime Video series remain, like the book, painterly.

“To stay faithful to Simon’s artwork,” says Knoll, “we made sure that the models and the paint and texture detail all matched to the details in his work. We would literally look at every shot, every single frame, and we treated it as a painting. So we would stop on a single frame and say, ‘Okay, does this look like a painting?’” 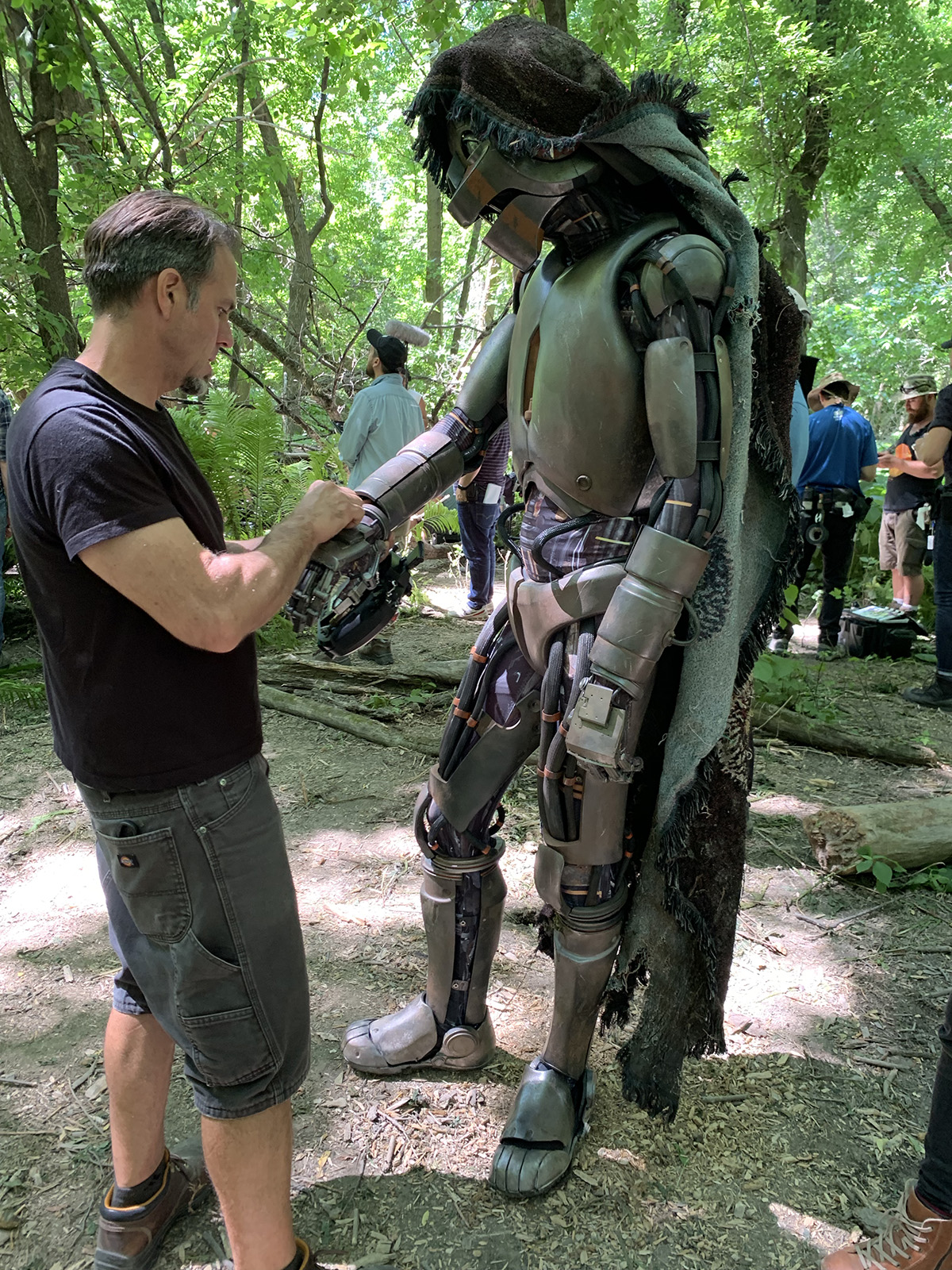 The particular models Knoll refers to here included for robots, both practical ones built by Legacy Effects and others built in CG (the visual effects for the series were crafted by Rodeo FX, MPC and Bot VFX), with visual effects augmentation carried out to remove rods and puppeteers. That approach was also used for the character George Willard’s (Paul Schneider) bionic arm.

Other visual effects were necessary for digital environments and extensions for the town that exists above ‘The Loop’, strange occurrences within the town like a house ripped into the sky by an anti-gravity field, and additional key moments in the sci-fi series, which was created by Nathaniel Halpern and includes an impressive roster of directors: Mark Romanek, So Yong Kim, Dearbhla Walsh, Andrew Stanton, Tim Meilants, Charlie McDowell, Ti West and Jodie Foster.

Legacy Effects engineered a number of robots and robotic effects for the show, ranging from humanoid androids, bi-pedal bots, the bionic arm for George, and other animatronic effects and prosthetics.

One of the studio’s prominent creations was the two-legged ‘Jakob’ robot. It served a key role for the on-set shoot, observes Knoll. “In close-ups and tighter shots, we kept to a rig paint out approach, and kept the performance of the practical robot. In episode 102, for example, we have a moment with the Jakob robot where his performance was spot on using the practical robot and the puppeteers that we did not have to do a full CG replacement.”

Of course, a number of shots make use of a CG robot, which was handled by Rodeo FX. The digital version would essentially be cut back-to-back with the practical robot. “Shortly after that moment where the robot is having a more emotional moment, he runs off down the street at the end of the scene,” notes Knoll. “For that we did a full CG takeover and we had a CG robot that we built with Rodeo FX, and that carried onto the rest of the shot. So we did definitely emulate the movement of the robot that Legacy built.”

“Then there’s the fight between Jakob and the Spider robot in the final episode,” adds Knoll. “We had some stand-ins that we used for shooting in Winnipeg, but for the most part everything with the spider robot is CG.” 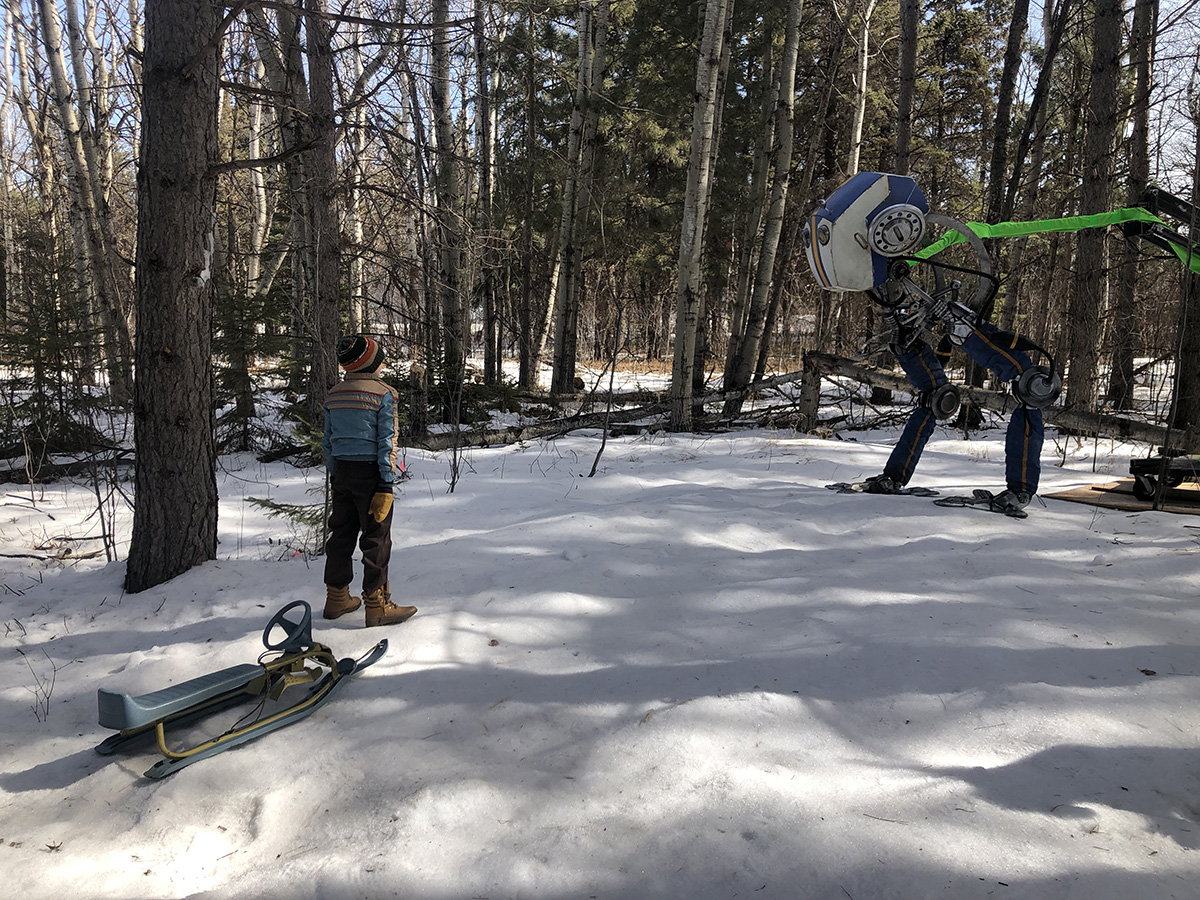 Knoll praises both effects teams for helping to realize a character in the most believable way possible. “While we built a full CG robot,” she says, “we still kept true to logistically the range of motion, say, the way his head would tilt or move. It really was subtle and less sophisticated.”

A different robot, the ‘Scrapper’ robot, seconded by the character Ed (Dan Bakkedahl) to protect his family, also made use of a practical component for some filming. “We had the head built as a practical piece, and then it was operated with rods and puppeteers, and we put it on a dolly so that it could push back and forth within the frame,” describes Knoll. “It was then of course a full CG scrapper robot that was built at Rodeo FX.”

“The practical pieces of this robot were more to give a sense of scale for blocking by the DP for composing the shots, and getting a sense of the timing,” continues Knoll. “We had what we needed in the editing room, which was excellent. But we also did have a lot of fun with animation on this robot, because we could go a little crazy with it. He matches to the performance of his operator in one of the episodes. There’s a lot of funny moments there where, for example, the operator will go to have a smoke a cigarette and the robot emulates that motion even though obviously he has no cigarette.”

A striking moment from the series features a house in a snow-swept clearing being ripped into the sky by an anti-gravity field. Knolls comments that “the house disintegration shot actually was one of the most challenging effects shots on the show. It was the first shot that we started on in pre-production with previs. We had the previs done at MPC, and Rodeo FX worked on the final shots.” 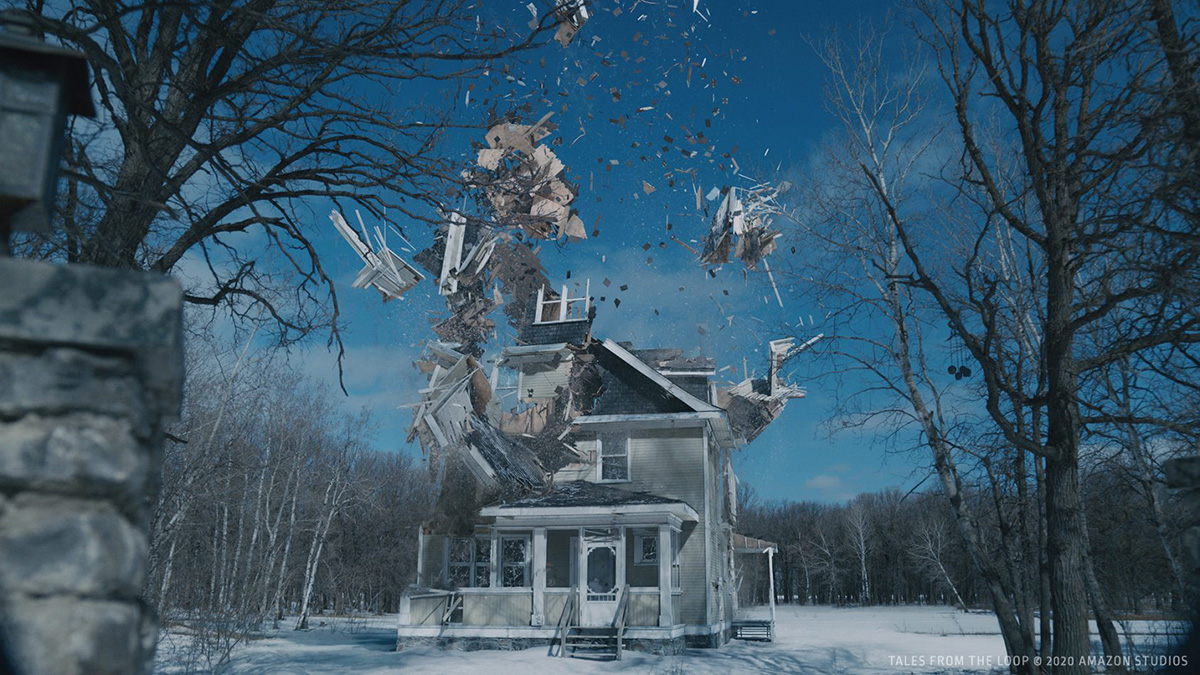 The real challenge for this shot, says Knoll, was how to use regular simulation and effects – what would normally be used every day on most shows – but impart specific and counter intuitive velocities, acceleration with a direction that’s opposite from reality.

“The true difficulty was that, because it is such a surreal event, any artistic direction was very subjective,” Knoll explains. “To achieve the look we desired, which was this kind of photorealistic light quality, we had to get really surgical about the details. We had to work on massaging the light levels, adjusting the contrast and the shadows that were hitting the home. We also had to vary the speed of the pieces that were moving upward so it felt real and almost chaotic versus uniform and speed. We would really pinpoint a shred of a wood chip, for example, and say, ‘Okay, we actually need variations on the size of the wood chips.'”

“There were so many intricate details when you think about it,” notes Knoll. “We had to really get in there and just have hours and hours conversations about these individual pieces.”