De-ageing, transforming characters, face replacements, crashing ships and a binary Brie Larson in Captain Marvel are identified as some of the toughest shots in the film by several members of its VFX team, who I was able to sit down with this week.

The film, from directors Anna Boden and Ryan Fleck, tells the story of how Carol Danvers (Larson) is catapulted into the Marvel universe as one of the most powerful beings we have seen.

Production visual effects supervisor Christopher Townsend led a team that was made up of several VFX studios and hundreds of artists. Here’s a look at just some of the principal challenges from the crew I spoke to.

Janelle Croshaw Ralla (additional visual effects supervisor, Marvel Studios): On my plate I would say that the de-ageing was, from the beginning, a very daunting task. We had seven months and a lot of shots. We originally thought there were over 800 shots but the edit was trimmed significantly, which was devastating in some ways because a lot of the shots had finaled. 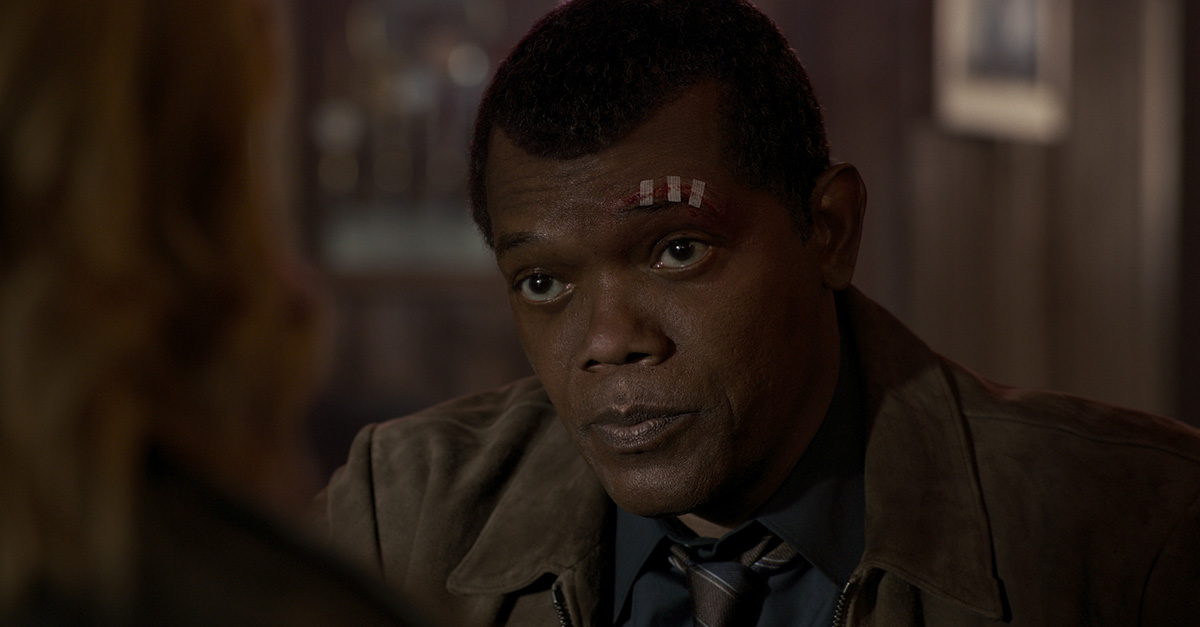 Another challenging but not very talked about effect was Captain Marvel’s communication tech. It was based on a ferrofluid like holographic concept and developed by RSP. A forearm panel on her suit would slide open to reveal ferrofluid like liquid which would turn into these little liquid spikes that would project a hologram. 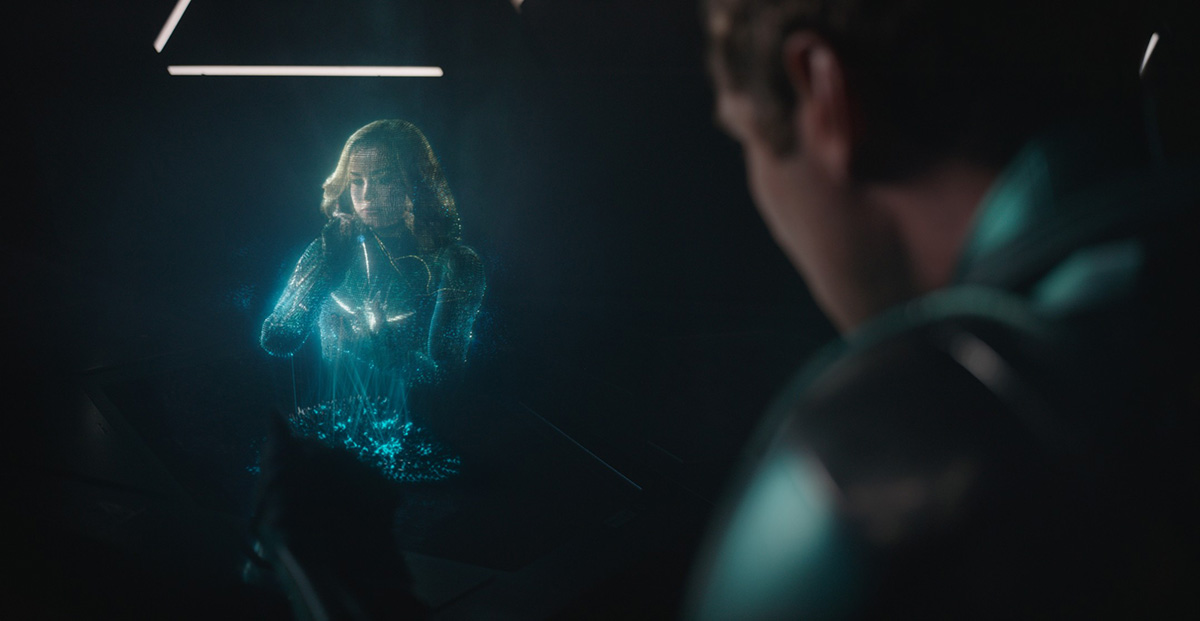 That was an effect we worked on until the end. It was one of those, ‘Hey, can you make something we’ve never seen before?’ effects. There was also the request, ‘Can you make it analogue?’ And, you’re like, ‘Well, okay, but it’s a hologram that comes out of her forearm…’ So it had to be high-tech but also fit into this indie 90s world. It ended up ultimately having a really cool organic look and vibe to it.

Shannon Justison (previs supervisor, The Third Floor): In terms of visualization, the scene that I looked at and was like, ‘Oh man’ was the Skrull transformation on the beach. There’s only a certain amount of exploration of how far we’re going to take those effects in previs, but while we were developing the shots they were also still figuring out the rules for how these guys transformed. There was a lot of thought in terms of how they would transform and they wanted it to be very visceral. They didn’t want to just be like a magic-y fade, or they didn’t want it to be Mystique from the X-Men films. We were considering things like, when a Skrull changes and they change their clothes, are the clothes part of the Skrull? 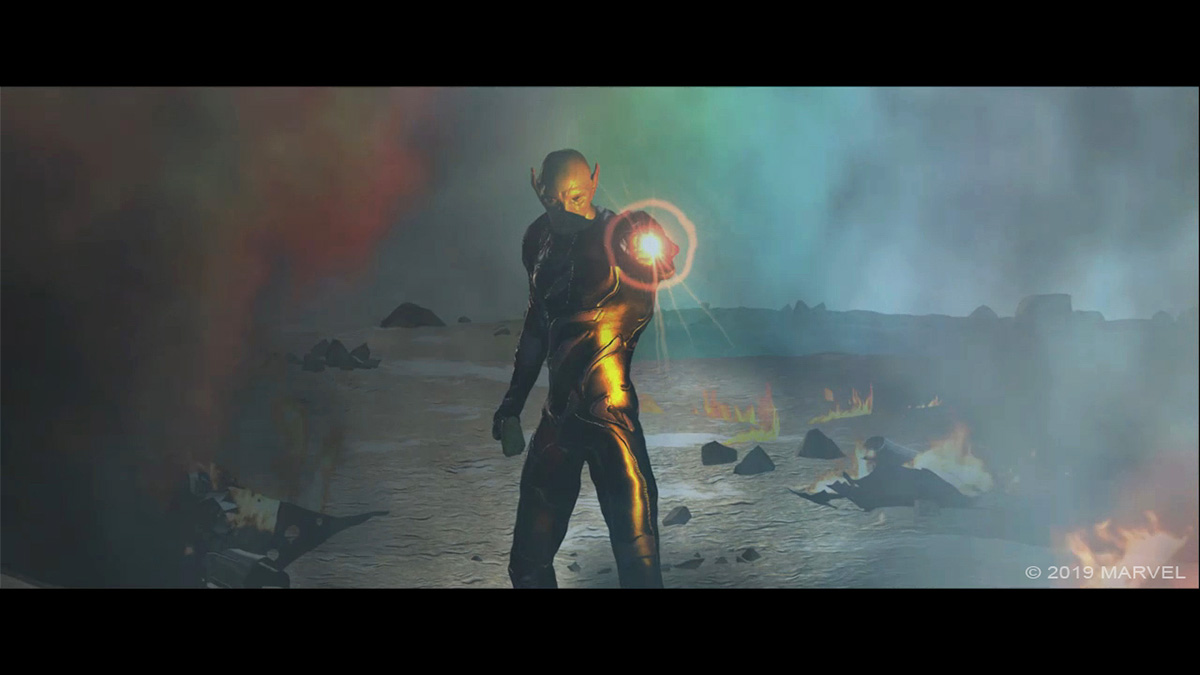 The first few times we previs’d it, it was always a big orbit reveal, and the character Talos was transforming into a male character. The idea was that the clothes came on after the body transformed, which made it okay if he was naked from the chest down. Then they wanted it to be a woman that he changed into, and suddenly it became this very careful dance of making sure that the camera was at the right place as the wetsuit came on her, so you could see the body and face transform ahead of the clothes. It’s one shot, but I think we did more than 85 versions of it just to make sure it was just right.

We did a full CG previs first for the shoot, and then once they shot, we got the plates back for postvis. That was a very tricky postvis shot because it is a big orbit with nothing to track except ocean. Digital Domain did the final VFX and it was always going to be very hard for any vendor – they did a great job. It was certainly a triumph for them.

Kevin Souls (visual effects supervisor, Luma Pictures): We did the car chase and the train chase across LA. There was the fight scene between the old woman and Vers, it was actually quite tough. And the reason it was tough was that the initial approach was, I want to say ‘low-tech’, but it’s not really low-tech. They essentially photographed the scene with stunt actors for both Vers and the old woman. And then they would shoot a version of the scene with the real actors, but moving quite slowly from about the same positions.

There was no camera matching but we were in the same lighting. We essentially extracted the movement from the stunt actors, picked the take that made the most sense for the real performance, and then we were tracking both, extracting it, and remapping it on. When it worked out of the box, it was great. But then there were shots where the forehead felt too large or the motion of what the real stunt person was doing didn’t match the actor – then it just looked bizarre like a blur; it looked like a blob. So you ended up having to cheat back in the motion blur and distort the face.

I would joke with Janelle that we would do a pass and we’d finish it on a Friday and I’d send it off, and then I’d come back on a Monday and I’d be like, ‘I hate that!’ And you would just start over. It was a big process of iteration.

Nick Crew (visual effects supervisor, Scanline VFX): Scanline was responsible for the dogfight sequence in which the Kree Fighter shoots down Carol’s ASIS Aircraft. Technically, the most challenging shot we had was where the ASIS is coming in crashing, kind of spiraling out of control and the debris is shooting all over the place. What was very interesting about that was they shot the wreckage before we did any effects work. So we had the nose over here and part of the body over here and these discernible wing parts here.

We had to figure out how to cut the model and destroy it in a way so that it would seam in with the location photography. We used a combination of about a dozen animate-able pieces, FX animation on additional pieces after that, followed by a rigid body destruction simulation to sell the aircraft breaking apart.  After these steps were done, we simulated water and sand interaction, and small explosive events to help justify the action. That was definitely the most time consuming technical challenge we had.

Creatively, the core explosion in which Carol absorbs its powers was the biggest challenge. That was such an interesting challenge because you had so many different scales of the same event.  We would go from the wide explosion, into macro shots of the hands or face, really seeing these small energy particles wrap around her skin and then enter into her body creating sub-surface illumination. Each angle of this sequence had a unique creative challenge.

Craig Hammack (visual effects supervisor, ILM): ILM did a bunch of sequences including the space battle with Captain Marvel where she goes binary, and some of Goose the cat, and several others. So much of our work fell into the fantasy realm. When you have a large crew, you want to be able to define rules for how things work. We kept finding that there were some effects that had to behave a certain way that you couldn’t really define. So then it became this really creative iterative process, which was really rewarding at the end of it.

Once you get into Captain Marvel’s full glory you can have fun with it, you can use it to your advantage. Then it becomes a staging problem. How do you show her next to a giant spaceship, and make it feel like you’re framed correctly and that you’re relaying her power when she’s really this small on screen, but you have to frame for this big thing? The action of it can become fun because she does go into these iconic poses so often that is just beautiful. And by the time you get to a flaming mohawk, it’s all cards on the table.

Adhering to some of the rules was the toughest part, including some shots that came in late where, at the end of the movie, she flies up to the ship and she has her bomber jacket on. So what do you do with the binary – which is supposed to be all-powerful – does it burn through the jacket? We would not have it burn through her suit, previously, because it was a special suit, but now she’s wearing a bomber jacket. In the end, it kind of bleeds through it. It was the same with rules about the cat, the Flerken. I mean, how does that creature fit inside the cat. So there it was, ‘Oh, there’s a portal to a pocket universe.’ You just need to make it work right, and it needs to look cool. Always cool.