Plus, how a new tool called Swoop made the wind spirit character possible.

At the VIEW Conference in Turin this past week, attendees were treated to a special effects preview of Walt Disney Animation Studios’ Frozen 2 courtesy of visual effects supervisor Steve Goldberg. This was one of those top security events, with phones placed in blacked-out bags and a crack team of guards checking the room during the presentation.

That’s all because Goldberg showed several clips from the film plus a series of breakdowns for a couple of key effects sequences. This included a moment when Elsa dives into a raging Dark Sea (using her ice powers to get over some enormous waves), only to encounter a Nokk, a mythical water spirit in the form of a horse. The Nokk rages underwater and – in some incredible scenes – on top of the tumultuous waves.

We also saw some fun effects moments involving Olaf in the Enchanted Forest. I have to say the Frozen 2 scenes we saw looked spectacular, and the behind the scenes even more so, since we received a ton of insight into the conceptual, animation, FX and rendering approaches that were used on the film at WDAS.

At VIEW I got to sit down with Goldberg to chat about some of the VFX highlights from Frozen 2 (he was also the VFX supe on the first Frozen). Read on to learn about the major challenges for his team this time around, including the wind spirit, for which a new animation tool called Swoop was developed, and of course what fluid and particle simulations went into making the Nokk.

b&a: What were the things you learned from the script where you knew visual effects were going to play a major role in Frozen 2?

Steve Goldberg (visual effects supervisor): Well, I came onto the film about two-and-a-half years ago. We knew that there were going to be these elemental characters. I think in the trailer you’ve seen the water horse, it’s called the Nokk. We also have this wind spirit, and you’ve seen a few shots of it in some of the trailers.

So, at the beginning, I thought, okay, wow, we’ve got these elemental characters, taking the wind spirit, for example, I wonder what layout is going to see in their shot, or how is animation going to animate it? Because, usually we only see the end result – you see what the wind has picked up, so it’s leaves or flower petals or dust, or whatever it might be, or you see the effect of wind on a character’s clothing or their hair. 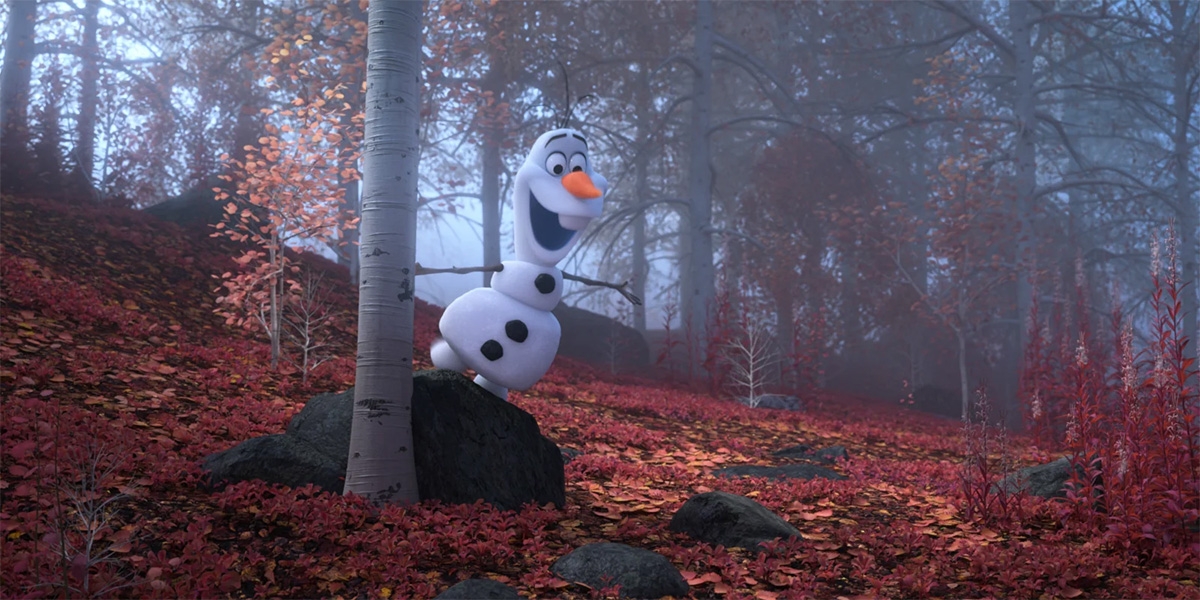 In the past, wind has been something just the FX department does. But in our film, it’s a character. So the first thing that we did was a little 11 shot test. So we pulled out representatives from all the departments and put together the whole team to go ahead and experiment. What would this even be and do we have to develop new tools for it? Can we go with what we have? How are we going to approach this thing? That was definitely one of the bigger challenges.

We ended up having our technology department create a wonderful tool that allowed for a real-time interaction with curves in space. And you could see how things were traveling on that all in real-time. It was really easy and intuitive to edit. You could change the shape of it. You could change the timing of it and get feedback all in real-time, which is awesome. And obviously it has uses far beyond wind.

b&a: What was the tool? Was it still something that sits on top of Maya?

Steve Goldberg: Yeah, it was all written into Maya, which is the general framework that we use and we’ve got tons of proprietary software written to use within Maya. We call it Swoop. What we started doing with it was really being able to lay things out in layout.

[perfectpullquote align=”right” bordertop=”false” cite=”” link=”” color=”” class=”” size=””]In the past, wind has been something just the FX department does. But in our film, it’s a character.[/perfectpullquote]

We had a wind rig that was running along the side and we were able to basically change how much was being affected as this wind went through a scene. Things like, is it the size of this building, the size of this room or is it much smaller, say at a personal level and where it could wrap around my arm and you would see the effect on my sleeve? It can handle all of that. The thing is, the wind can be playful, the wind can be huge and dangerous.

We ran early tests of it and we were really pleasantly surprised by the fact that we really didn’t need any particles to be able to support it. It was all about guiding that wind force itself and then seeing how that would affect the surroundings.

b&a: Let’s talk about the water horse, the Nokk. How did you get started on that?

Steve Goldberg: We had some early visdev that was very ethereal and not tied down at all, not in high detail. It was just this beautiful watercolor. But the thing about the water horse was we knew it would be dynamic. It needed to be moving water. It’s always going to be in motion. You can certainly look at a frame and get it, but ultimately what’s happening with the mane and the tail being made of water, what does that mean? The way all of the water moves along the surface of the horse is a ripple. It all needed to reflect the mood of the horse and support the storytelling.

So, we started out with these very loose ethereal paintings and said, great, let’s hold off on the art direction for a moment. We took a horse from the stock room and said, let’s just start playing with this and see what we get. We put on a main and a tail and we did a test – I call it the fire hose test because the mane and the tail are just gushing. And it’s really interesting to look at, but also this horse had to act. So we went through this big iteration process of, let’s see what we’re going to get through the CG process and then give it back to the art department.

Lisa Keene, who’s our co-production designer, took the lead on it and she would guide it through paint overs and then we would get that back and say, okay, let’s calm that way down. Lisa would provide some footage or stills of these very gentle water fountains where the water is just gently spilling over a hard edge – you get these beautiful shapes. We’d say, well, it looks great, but now it’s almost too smooth. We’re not getting that break-up feel. So it really became this big iterative process.

I felt like it was important to see it in motion, just because it’s water and so dynamic. And then we could get our art direction that is in support of something that is alive and full of moving water.

b&a: Did it quickly call for a fluid simulation, or is it more of a combination of particles and fluids?

Steve Goldberg: So it’s a big combination of all kinds of techniques. I think initially we started out with the fluid sim and that’s where we got the fire hose effect. We ended up having a cloth sim going through our tech anim department and feeding that into FX. And then as the water would break apart, coming off the mane, that’s where FX go ahead and take it and coming off of this nice smooth sheet, break it apart into some larger water droplets and smaller water droplets. And then into a fine mist. Then in motion you really buy that it’s flowing water.

And depending on the mood, we’ve got the horse when it’s angry, where it’s curious, it’s underwater, or it’s on top of the water running – all these different situations that required some tuning of the dials.