“A man falls from the poop deck, hitting the bronze hub of the starboard propeller with a sickening smack.”

That line from James Cameron’s script for Titanic, coming deep into scenes of the chaotic sinking of the famous cruiseliner, might sound simple enough. But it would turn out to be the basis of one of the blockbuster film’s most memorable shots.

The man who strikes the starboard propeller, and then continues to spin wildly before slamming into the ocean below, forever became known in movie lexicon as ‘the propeller guy’. Bringing him to life and, sadly, death, would require a gigantuan effort from Titanic’s visual effects crew – principally Digital Domain – which combined live action, miniatures, digital doubles and digital water to realise the final ‘sickening’ moment.

On the the 20th anniversary of Titanic, we talk to key members of the VFX crew to uncover a few remaining secrets about propeller guy, including how animator Andy Jones tackled the shot on his first ever feature film, how the elements making up the final scene were composited in an early version of NUKE, and the surprising truth behind whose face was used for the digital victim.

This article previously appeared at vfxblog.com.

Titanic was a film that boasted several visual effects innovations – digital water, a melding of live action and miniatures with digital set extensions and compositing, and the advent of motion captured CG extras. Digital Domain, in particular, had pioneered the use of mocap to realise many of the synthetic crew members and passengers appearing on the ship. But motion capture was still a primitive process, so some of the more complicated stunts mostly used mocap as reference only.

“Our digital humans were animated in one of three ways,” outlines Daniel Robichaud, an animation supervisor on the film. “They were either keyframed by hand, which included the propeller guy, or motion captured, or done using a hybrid technique that we devised and named ‘roto-capture.’”

The roto-capture technique consisted of motion capturing a performance with a limited number of markers, and using the result as a 3D reference to hand animate the CG characters, mainly for stunt scenes.

“We did performance capture many, many stunt vignettes using the production’s stunt team,” says Andre Bustanoby, a motion capture supervisor on Titanic. “But those were meant to be used as a starting basis for people falling off and onto different parts of the deck as the ship sank – the first 10-20 per cent of the animation would be capture and then keyframe animation would extend the shot as needed.”

“The capture data would get the overall animation going,” adds Bustanoby, “and then the animation team would extend the stunt to fall hundreds of feet, hitting things along the way et cetera. We did also film stunt people doing high falls into air bags down at the Hughes hangar where the miniature ship was being shot on the motion control stages. These full size stunts also became a basis for extended and enhanced passenger animations.”

The propeller guy was handled slightly differently, in that he required a very specific kind of action; notably spinning. Ultimately, the character was entirely hand keyframed by animator Andy Jones, who was then working on his first film, and is now an Oscar winner for his work on Avatar and The Jungle Book.

Tasked with the shot, Jones’ first pass at the spinning animation in Softimage didn’t quite meet Cameron’s expectations. “I remember visual effects supervisor Rob Legato calling me into the review suite – this was my first time meeting Jim – and Jim was quite disappointed that the fall did not feel far enough,” says Jones.

“He wanted me to double check the math on it. I assured him that the distance and rate of speed the figure was falling was correct. He then asked me to double the distance he falls from after hitting the propeller to the water. It would have been difficult to push the water plane away without breaking other parts of the shot, so I ended up animating the scale of the figure down to about 60 per cent his size from the propeller to the water, giving the illusion that the figure was falling farther than he really was. The trick worked and Jim approved the shot.”

The face of a falling victim

These days even digital doubles are built to highly photoreal levels and are almost indistinguishable from the real actors, but on Titanic they were generally small enough in the frame that it wasn’t necessary to achieve such high quality. Nevertheless, the faces of many of the digital doubles did begin with actor likenesses achieved from Cyberware scans, and propeller guy was no different. It’s just that the face was not actually from one of the actors on the film.

“The memorable thing about propeller guy was that I decided to put the producer’s face on him,” reveals Legato, referring to Titanic producer Jon Landau. “So a scan of Jon was used as the basis of propeller guy. All in good fun, but a bit on the dark side of humour since he he falls to a brutal end.”

Even watching the scene closely on DVD or Blu-ray and stepping through the shot frame-by-frame, it’s perhaps impossible to tell that propeller guy has Landau’s face. But, as Titanic visual effects producer Camille Cellucci recalls, it was a fun aspect of the shot for the tight-knit crew who had laboured on the film for many months.

“It was the internal joke of the whole crew for a long time,” she notes. “We were like, ‘We’re gonna do this crazy thing and put Landau’s face on the propeller guy!’”

Animating propeller guy was of course only half the challenge of the dramatic shot. A number of other elements were crucial for making the scene believable, and these were brought together by compositor Rachel Dunn (Carey Villegas was the compositing supervisor for the sequence).

First of all, since the shot involved a down view of the propellers with the ocean below, a 1/4 scale model section of Titanic built by Don Pennington was filmed motion control against greenscreen. CG water – then achieved using Arete’s RenderWorld software – with no camera movement was also rendered. The propeller guy was rendered in Pixar’s RenderMan. Various plates of overhead shots of people splashing around in water were filmed as generic elements and finally a plate of the final splash was also acquired.

Using an early version of Digital Domain’s compositing software NUKE, Dunn composited the shot. But first she had to make a few necessary tweaks to parts of the scene. “I remember having to refine the animation of the falling guy so he hit the propeller at a point that felt natural, and hand animate the shadow across the propeller just before he hit it. And the other thing was to use the ‘pan and tile’ tool to animate the water in a way that it felt it was dropping away from us at the appropriate speed.” 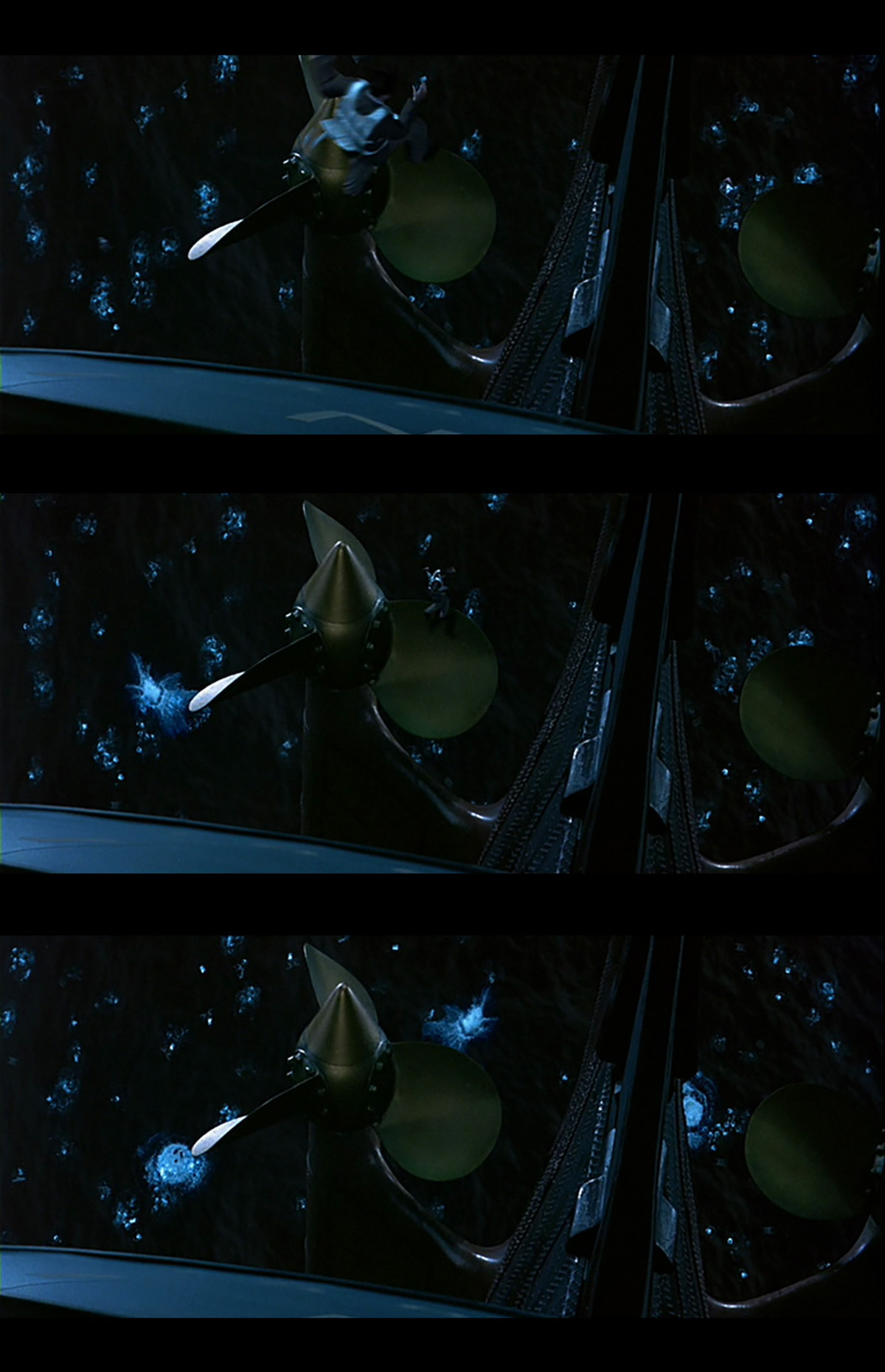 The final shot also has a hand-held camera move, something that was added in post. “The motion control plate only had a vertical move in it to convey a feeling that the camera was leaning further out from the edge,” explains Dunn. “The handheld feel was created with a mathematical expression in a translate node in NUKE.”

One of the tougher parts of compositing the shot relates to how 2D work was done back then – NUKE did not yet have a 3D interface. “There was only the ‘pan and tile’ node that was created for doing set extension work on Apollo 13,” says Dunn. “It was a virtual 3D card, but it only showed a center point – the rest was trial and error to set the card at the right depth, angle and position to work with a particular shot.”

“If a 3D camera move was required,” adds Dunn, “the match-move crew would supply a chan file, which is basically a list of numbers, that could be imported into the pan and tile node so it could move correctly in 3D space. However, that was not needed in this case. So I placed the centre point for the pan and tile tool way down below the bottom edge of frame, where I estimated the centre point of the ship rotation might be, and then rotated it in Z so it would feel like the water was dropping away from us.”

For many VFX shots in Titanic, Digital Domain did have a unique tracking solution, especially for live action and miniature elements that required set extensions or the addition of digital extras. It involved a combination of an on-set ‘cube’ structure, a stereo camera rig that filmed the structure (which had known measurements), and tracking software called ‘TRACK’ developed by Digital Domain’s Doug Roble that relied on computer vision and photogrammetry.

After Titanic was released, propeller guy became an instant hit amongst audiences, partly for the shocking reaction it drew, even after multiple viewings (and there were certainly multiple viewings). Crew members knew their digital creation was a big deal when the mainstream media also caught on.

“Once the movie came out,” recalls Jones, “I remember watching David Letterman one night and he was talking about Titanic. He then said that he had a part in Titanic. He said, ‘It goes by fast, but it was a small cameo.’ He then proceeded to play the propeller guy shot.”

That was just one of the many references to propeller guy. Billy Crystal even referred to him in his song intro while hosting the Academy Awards the next year, where Titanic would take out a record-equalling eleven Oscars, including for best visual effects (the award went to Robert Legato, Mark Lasoff, Thomas L. Fisher and Michael Kanfer).

Interestingly, the attention towards propeller guy came something as a shock to the VFX team, who had certainly worked on much more intensive effects on the film – from the unique morph transitions, to the ship at sea shots, and the incredibly complex shots of Titanic tearing apart. 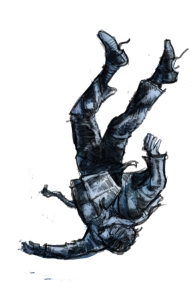 “In fact,” says Dunn, “on every show since The Fifth Element, the supervisors at Digital Domain had a tradition of awarding a pineapple to the artists who completed the most difficult shot of a particular show. I wish I could tell you that propeller guy was even remotely a contender for that award. Instead I remember it being one of the quickest and simplest deliveries on the show.”

“I think James Cameron even thanked me for getting it done so quickly,” continues Dunn. “It’s kind of ironic that one of the most memorable pieces of work that I’ve done was so uncomplicated. But the credit for that lies in the people who planned and executed the shot so well before it even got to me – and to the sound designer who put the awesome ‘thunk’ sound under it when the guy hits the propeller.”

Vale, propeller guy. You life was short but your impact large.