Where the animation and rigging tool is up to right now.

I’ve been following the progress Nukeygara’s Akeytsu animation and rigging tool for some time now.

You can get a sense of how Akeytsu works by watching the demo video below, but essentially it handles rigging and even keyframing differently than other 3D animation tools.

Now Nukeygara has released a ‘roadmap’ for what lies ahead for Akeytsu, and, direct from business and marketing manager Charles-Arthur Bourget, here’s a brief rundown of what exactly that involves.

Where the software is up to now

Late 2017 was spent stabilizing our first release which carried over to early 2018. We spent time making sure our FBX import and export capabilities made it easy to interoperate with other software. We added several selection options that were requested and improved our IK and RF code to make it more stable and accurate. In parallel we started to do R&D on a variety of features including but not limited to facial blendshapes.

2019 was a transition year for us. We secured a seed funding of €1 million and needed to grow a very small team into a more structured studio. We refrained from outsourcing ‘to get the job done’ and hired staff that would help us uphold our holistic approach to software design. Structuring the company took key members away from the design but in the long run, this will allow us to move forward and go beyond the problem to deliver above-the-bar solutions.

On the dev side we switched focus to porting on macOS and put many other devs on hold. This may seem like an odd move but there is close to no native 3D animation software for that operating system and we wanted to lead the way. In the future what we learn will allow us to port much more easily to Linux. Now that we are seeing it through we are committed to providing much more regular updates going forward targeting a minimum of 3 every year. 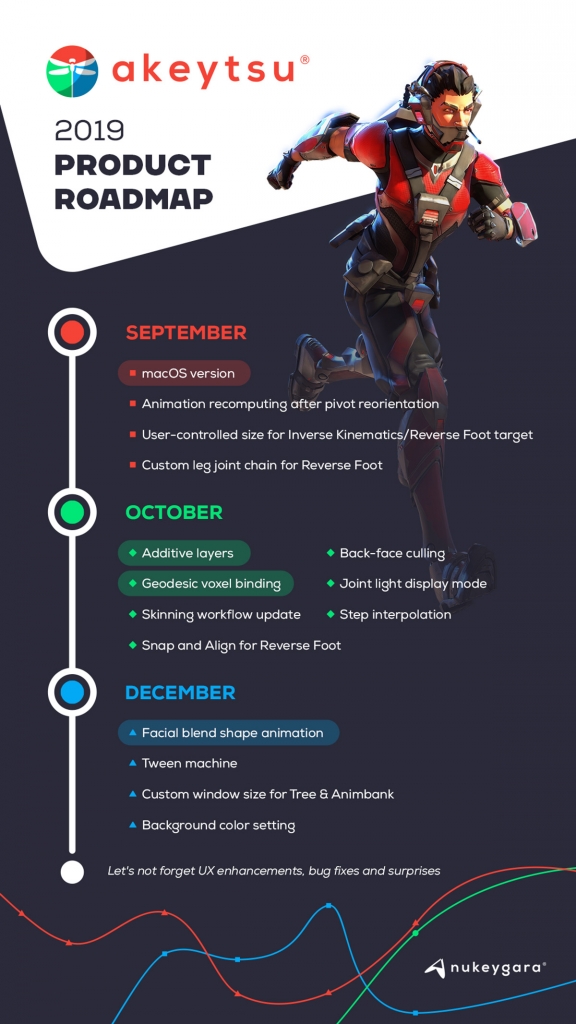 I should say we are learning by the day but they are 3 keys lessons I can tell you about:

The first one is about our Duo Skin workflow and how it was initially misunderstood by some users. The way skinning works in Akeytsu is that you first define rigid weights and we will then generate influences with a delta mush algorithm. Many of our users would try to get it done the traditional way and would start painting smoothed influences during step 1. This is very much a case where the user becomes the enemy because he will do what he believes is right at the wrong time. Here we did not do a good job at restraining the user in an elegant way so that he naturally follows the right workflow that brings the intended results. We are planning on revising the workflow in our October release this year.

This second example is one where we should do quite the opposite and offer more flexibility. The cool thing in akeytsu when working with curves in akeytsu is that they are fully integrated in the viewport so you never lose sight of your model in the process. Our rotations are calculated in quaternion which gets rid of any case of gimbal lock. The trade-off is you cannot work on your F-Curves with tangent handles as in a Euler-system and we made up for this by offering different interpolation modes between keyframes. That’s not enough and some animators just want to nail their curves. We intend to offer a Euler-mode in the future.

The third one is about listening to users when it matters. Our approach to UI has always been as simplistic as possible so that animators keep focus on their animations rather than having to look at multiple spread-out panels. Here we want to stick to that initial idea but offer custom window sizes especially for the Tree and AnimBank windows.

Where Akeytsu is being used

I want to highlight two very different projects here and these are still under development.

On the one hand you have Phoenix Point by Snapshot Games where Akeytsu was used to animate most of their bestiary which covers a variety of multipedes, insectoid creatures and alien mutagens…and a very dangerous kind of siren. The way their animators used Akeytsu to handle multiple sets of legs and implement a mutation system in Unity based on the animation hierarchy is simply brilliant. I want to give credit to Elen Nikkol here but really the whole of Snapshot Games who are real Akeytsu wizards. Phoenix Point is slated for December 2019 and will be the spiritual successor to the X-COM series directed by its original creator Julian Gollop.

On the other hand I’ll mention more indie projects like Suki & The Shadow and Pumpkin Jack. These are often created by micro teams or solo dev. In the case of Suki, Akeytsu allows for a dramatic gain in efficiency to focus on other creative aspects of the game. As for Pumpkin Jack I love the fact that Akeytsu completely changed the way its developer sees animation. It’s now more about animation rather than technicalities.

Plans for the future

I think our 2019 roadmap speaks by itself. We are now en route to add more wings to our dragonfly or as I like to say “stuff the turkey”. We have 3 significant updates planned for this by end of the year. These include major features (native support for macOS, an innovative facial blendshape workflow, implementation of additive layers and support for voxel skinning), other enhancements (animation recomputing after pivot reorientation in Bind Pose, custom leg chain for Reverse Foot, joint light display mode), the implementation of community requests (step interpolation, custom window size for Tree & Animbank) and more UX improvements, bug fixes and surprises.

In 2020 we want to widen our keyframe animation toolset, make it easier to work with Akeytsu when creating cutscenes and facilitate mocap imports but nothing is set ins tone at this point. Keyframe animation is the DNA of Akeytsu and we’ll have to strengthen that core before going further. The dream with all this is to grow Akeytsu into the ultimate animation toolset.

This week at befores & afters is #morevfxtools week, a follow up to #vfxtoolsweek from a few months. Explore some of the new tools artists are using every day in their CG and VFX work.