…And here’s why it was a different suit in the teaser trailer.

I’ve written about the making of digital suits in the Marvel universe, previously, and it’s no secret that superhero costumes are often fully CG or at least partially augmented with visual effects.

But that doesn’t make the process of matchmaking the live-action actors – who typically wear gray or ‘fractal’ tracking suits on set – and then rendering photorealistic suits an easy thing to do. Indeed, if the scene is more of a drama moment (and not a heavy action sequence), there’s a lot more time for the audience to focus on the detail of the CG suit.

ILM had that challenge recently for the Aunt May F.E.A.S.T. scene in Far From Home, where Spider-Man (Tom Holland) is enlisted to help promote the charity. Here, he wears the Iron Spider suit and there are scenes of him in the suit, sometimes with a full cowl on, and also with it off, revealing his ‘live-action’ head and face. At all times, ILM crafted the suit Spider-Man wears completely digitally.

Interestingly, audiences first glimpsed moments from the F.E.A.S.T. charity sequence in one of the film’s teaser trailers (see below), but here Spider-Man is shown wearing a different suit. This, says ILM, which didn’t craft the CG suit for that trailer, was to do with the release date of the teaser, which came out before Avengers: Endgame. “They didn’t want to reveal that Spider-Man survived Infinity War and his possession of the Iron Spider suit on Earth would have given that game away,” says ILM’s Far From Home visual effects supervisor Julian Foddy.

However, for the final film, Spider-Man would be shown in that sequence in the Iron Spider costume. “The Iron Spider CG suit, you just want it to be this completely unnoticeable costume that he’s wearing,” states Foddy.

“For me, the aim really was to try and make it so that people who don’t know about visual effects would have just thought he was wearing like a metal costume,” adds ILM CG supervisor Steve Ellis. “To get it to all work properly, we designed the rig of the Iron Spider suit and a rig of digital Tom Holland to be absolutely identical so all the controls, all the joints, everything was 100% identical in terms of placement, naming, and everything.”

“Then we would transfer that match-animation onto our own Spider-Man asset,” says Ellis. “That was just envelope rigs only, and then we would run off a series of simulation passes. We even did a layer of cloth simulation even though we weren’t wrinkling the metal suit at all. But we still had to have multiple layers to make sure that we had spring tension and everything worked. And we would run a simulation pass that would effectively correct any of the odd enveloping or warping that we would get. Sometimes you would find that bits of the suit would stretch out of proportion, so the simulation brought all the proportions back together.”

Matching deformations also became an important part of selling the realism of the CG suit. “Often some of these shots are very close in on Tom’s face, and he’s doing very small tendon firings tha you can see,” explains Ellis. “He’s talking and he’s shrugging his shoulders so he’s firing muscles and all this kind of stuff that we had to replicate in the suit.”

This process, at ILM, involves using motion correct shapes, where artists go in a sculpt shapes in the CG geometry to better much what is happening in the plate. “In some cases it was a painstaking process because the fidelity of the tracking that we needed to match was so extreme,” says Ellis.

Although the suit adheres to his body, it is not intended to be 100% skin tight, and does not react to everything. “But you still need to feel that, when he turns his head, the suit moves the right amount,” notes Foddy. “The various layers of the suit absorb the movements a little bit.”

The work extended, also, to dealing with times when Holland’s real neck was visible. Here, ILM had to massage some subtle interaction between the CG suit on the skin at the neck. “We were able to use the CG version of Tom Holland – which was primarily used for tracking and match-animation purposes – to do a proper skin shade with Tom’s skin textures,” says Foddy. “What that allowed us to do was to actually get a correct neck shadow.”

“Also,” continues Foddy, “we used physically correct sub-surface scattering to depict how skin-tight metal suit would not only shadow on the skin but how it would also affect the way the light scattered internally. So when you’re looking at the Iron Spider suit on top of Tom where the suit finishes and Tom’s skin begins, there isn’t exactly always a clean line between the CG and the practical. You might actually be looking at a half an inch of CG neck, as well. And I think that’s one of the things that helps tie the whole thing together. That, and of course some fantastic comp work.”

“Yes, the compositing team, and also our roto team, helped enormously in this process,” describes Ellis. The roto guys would actually start work almost immediately on roto’ing Tom’s neck and Tom’s head but we took that stage further where we actually put that data into our 3D package and into ILM’s Zeno. And we projected that roto onto a card, and the card was positioned at the midway point between the collar of the suit. So that we then had a perfect one-to-one roto of the neck as seen through the camera positioned at the correct depth in the scene, as well as having the correct 3D match-anim for Tom.” 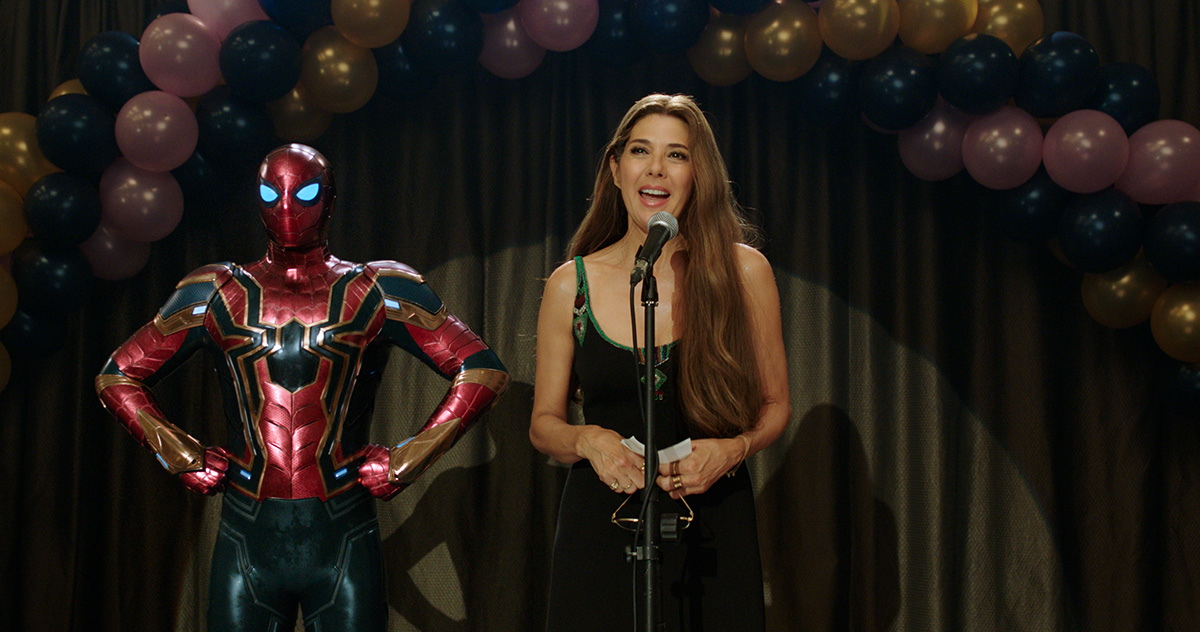 “The artists who were doing the sculpting work could exactly see where the 3D mesh of Tom’s neck was in relation to where it should be when they were comparing it to the roto through the camera. The compositing team and the roto department played an enormous role in helping us be able to really drill down to that pixel level of making sure that everything lined up properly.”

Check back soon for coverage of ILM’s work on the final ‘swinging through New York’ scene in Far From Home.

One Reply to “Spidey’s suit for the ‘Far From Home’ charity scene is, yep, all-CG”