Looking back to Halon’s early work on ‘War of the Worlds’ and their most recent ‘Mouse Guard’ efforts.

Just yesterday, director Wes Ball announced that his animated feature film project, Mouse Guard, was ‘dead’. But at the same time, he also dropped a stunning demo reel for the project (now taken down), which showcased previs made by Halon Entertainment in conjunction with Fox VFX Lab. The even more stunning thing about the previs was that it was produced with Epic Games’ Unreal Engine.

Halon has been experimenting with real-time rendering for some time now, but it’s a long way from one of the studio’s first projects, War of the Worlds (released in 2005), in which Halon founder Daniel Gregoire and a team of artists worked with Steven Spielberg for 9 months to help imagine the alien invasion film.

Here, Gregoire looks back, and forward, to the history of previs at Halon. 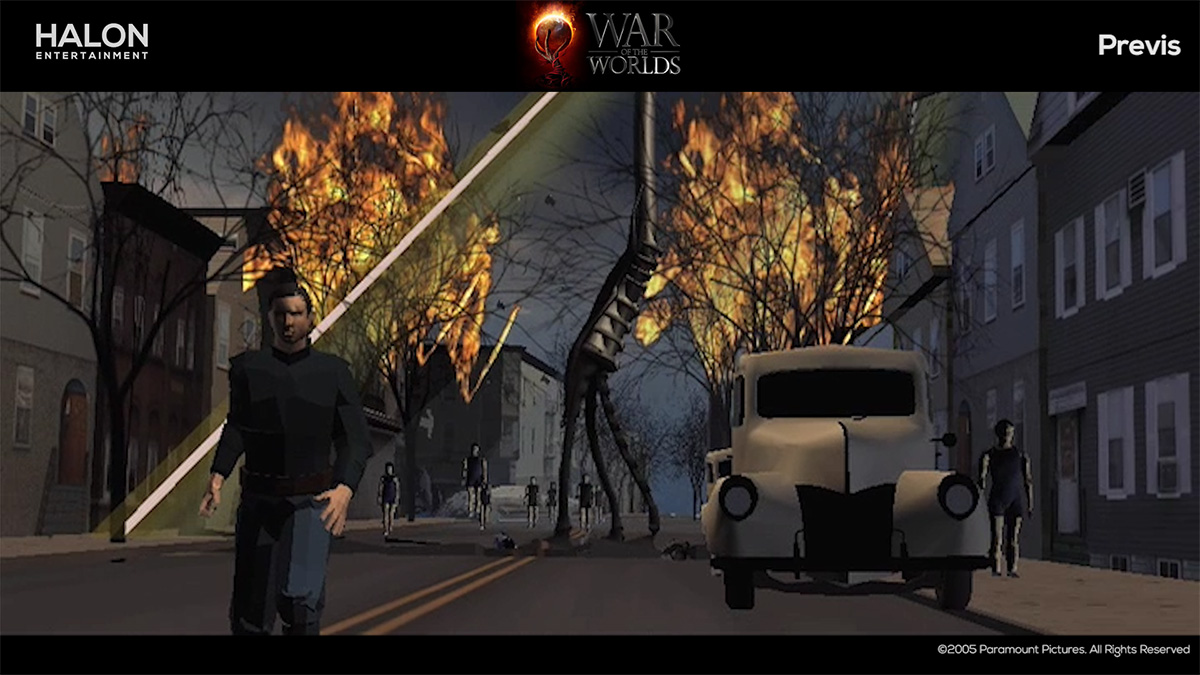 b&a: What were you asked to do on War of the Worlds?

Daniel Gregoire: I had the privilege to work with Steven Spielberg one-on-one to visualize a half dozen action set-pieces for Star Wars: Episode III and he was excited in realizing the potential of what the Skywalker Ranch previs team was bringing to the creative process.

On the strength of that collaboration I, along with 1st AD Adam Somner, David Lowery, and CG Artist Euisung Lee were invited to the Hamptons to work with Steven and his key creatives to visualize the major VFX scenes of War of the Worlds.

For principal photography I traveled with company to be available on-set with a laptop of the 3D files and edits of previs at all times, to answer questions from key creatives on set or in makeshift offices, offer technical solutions to the creative (what we have come to know as techvis) and also to make on the fly changes to the previs as locations changed and ideas evolved. 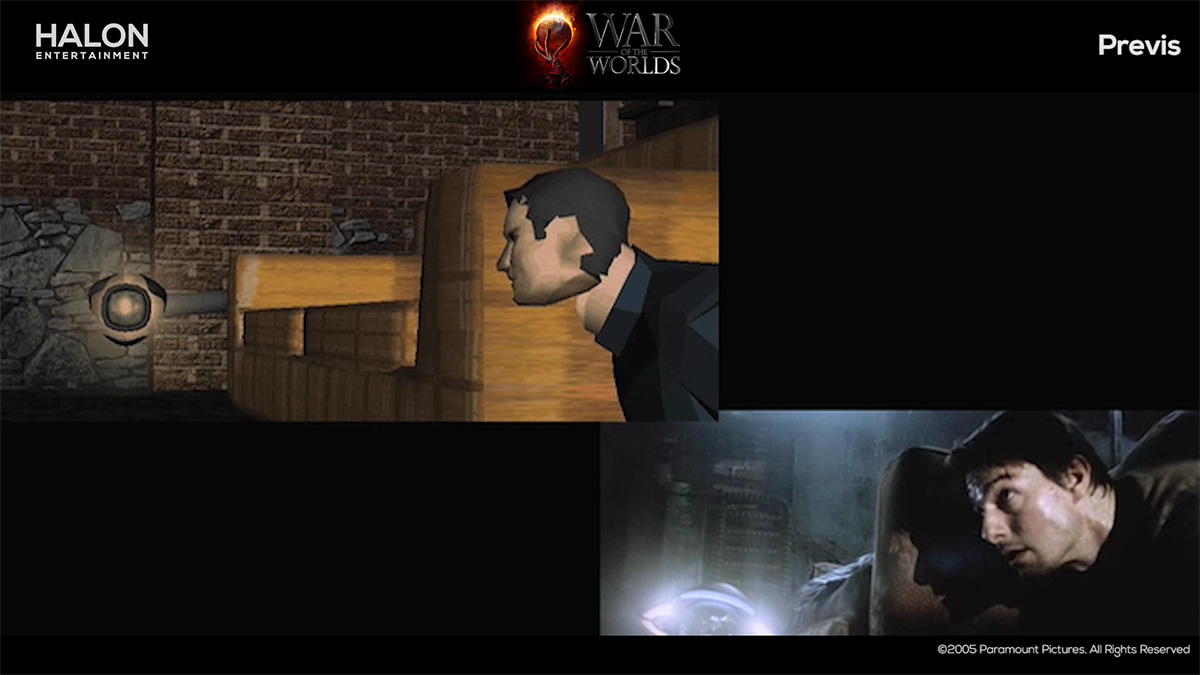 b&a: How do you think the previs work on War of the Worlds helped formulate Halon as a studio?

Daniel Gregoire: War of the Worlds was Halon’s first real Hollywood contract and brought us an amazing amount of visibility, so it quite literally helped form the studio. Now, beyond just our experience on Star Wars, we had work to show that was done by Halon Entertainment.

From the start of production it became obvious that what the previs team was doing would be key to shipping the film in their contracted delivery schedule, a very short time period for a summer VFX tent pole film.

Steven committed to directing the previs just as he would direct the film on-set and it was that early commitment to the core of the process – and the championing of senior VFX supervisor Dennis Muren – that allowed ILM to focus their efforts and successfully achieve the VFX in a very short delivery schedule.

This was a powerful statement – that previs was going to redefine how director’s and producer’s would approach the filmmaking process, and it came with Steven’s seal of approval. That would become the foundation for the company, generating instant interest and subsequent business. Even if people didn’t initially understand what we did, they saw Steven doing it and therefore wanted it themselves. War of the Worlds was a brilliant test case of the power of our craft. 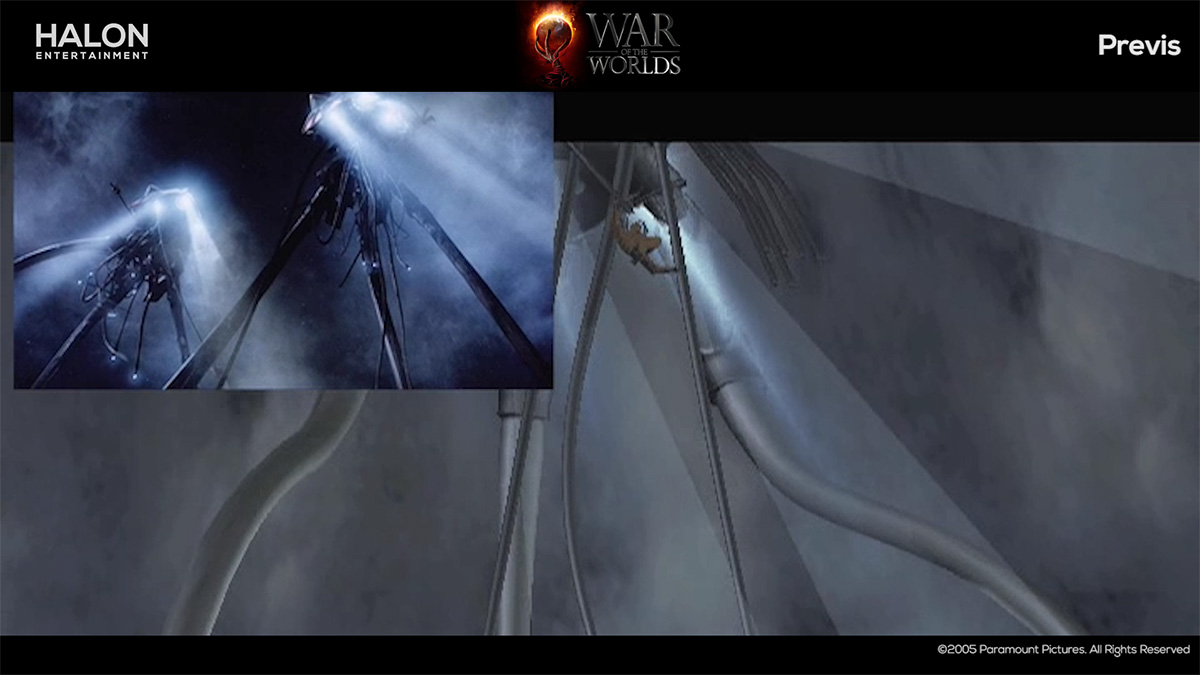 b&a: Since that time, what do you think have been the big leaps forward in previs/postvis/techvis at Halon and in the industry in general?

Daniel Gregoire: Previs continues to evolve just as fast as the software and the hardware to run it does. I think our growth as a company is directly related to our mandate to tackle the challenge of incremental change by remaining innovative and embracing – if not initiating – the run-ups to these leaps.

The biggest catalyst now is the free availability of game engines such as Unreal Engine. Working in real-time has been the catalyst for our single biggest bump-up in the arc of exponential technology, and has profoundly elevated our visualization toolset. We may have come a long way since Skywalker Ranch but it continues to feel like we’re still just getting started.