The special effects and visual effects behind Guillermo del Toro’s ‘Cabinet of Curiosities’.

Key takeaways from Guillermo del Toro’s Cabinet of Curiosities, now streaming on Netflix, were the many and varied practical effects creatures featured in the anthology series. But as del Toro has often done–in films such as Crimson Peak and The Shape of Water–these practical effects are always just the starting point for his creations.

Regularly, the director collaborates closely with the visual effects department to then extend the on-set creatures and performances with digital elements to bring his vision to life, often in the most scary way possible. This is what he did on Cabinet of Curiosities, teaming up with frequent collaborator Dennis Berardi, who recently founded visual effects studio Herne Hill Media.

Herne Hill’s visual effects supervisor Mark Hammond tells befores & afters about working with del Toro and the several directors on the series on a number of the specific creatures, plus a fun practical effect that Herne Hill even crafted themselves inside their studio. 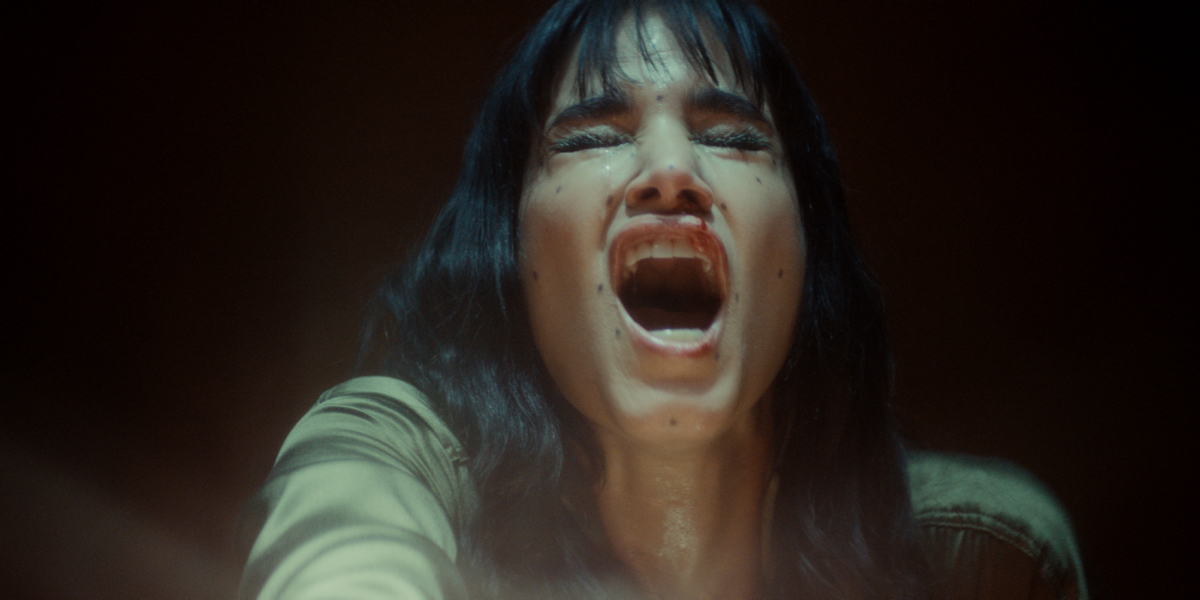 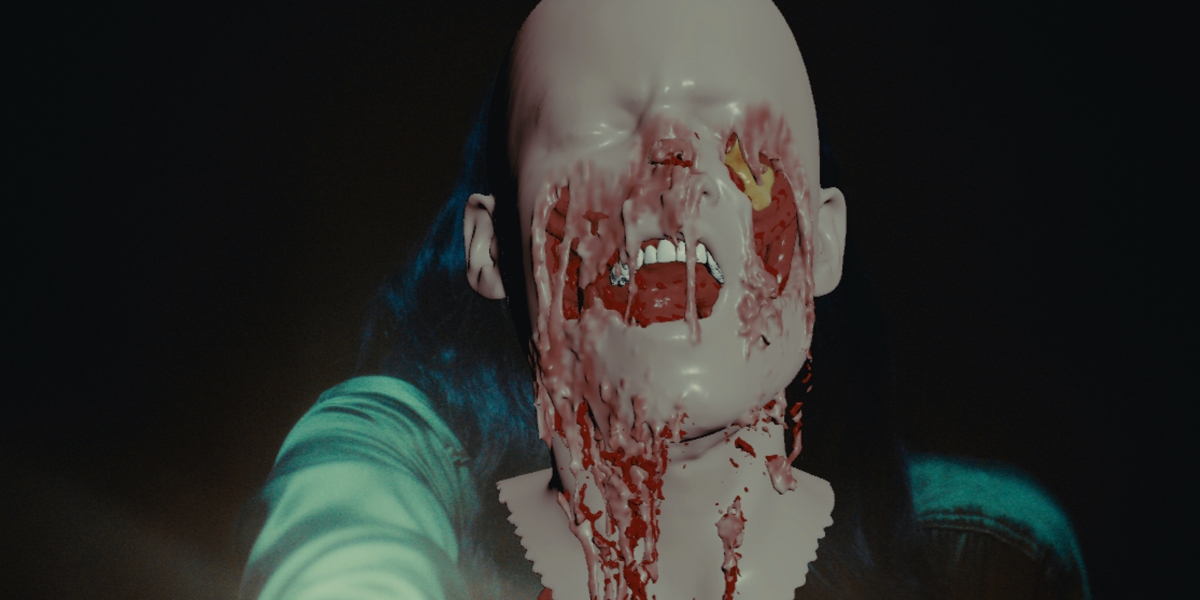 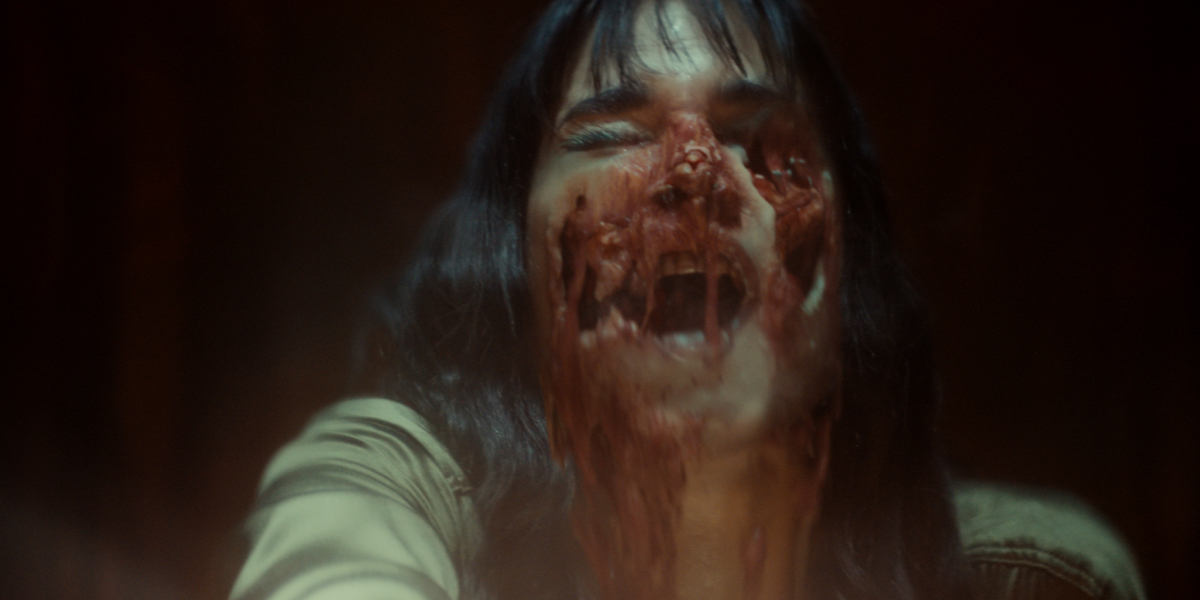 b&a: There’s clearly some extensive digital visual effects work in the series, but it also seems like practical effects were very important here. How did it all work?

Mark Hammond: Well, the interesting thing with Guillermo del Toro is every visual effect starts with a practical effect, which always makes the final result better looking. For instance, on Lot 36 we shot a practical torso with green arms and a green head. It gave us a really good lighting reference. The suit was really well made and the performance was mostly kept as is. We even kept the legs where we could.

In Pickman’s Model, the ghoul was first shot as a puppet. The puppet was really great, but we knew at the very least we would be doing facial enhancements, similar to “Shape of Water” so we had the puppet scanned. He’s in quite a few shots just as a puppet, but there were also many shots where we did replace him fully. Once Guillermo saw our 3D asset of the ghoul, his request was to have it match the animation the puppeteers did on set as closely as possible.

b&a: It’s interesting, isn’t it, because–not to dismiss any CG artist or anything like that–but having something in the frame with some real-world lighting, with some performance, really informs what’s going to be done in visual effects.

Mark Hammond: Always. And you have your chrome or grey balls or your HDRIs that you’re going to use to gather the lighting, too. I think what’s interesting is that a VFX artist’d instinct would always just remove the practical and put CG in. But when it comes to a Guillermo project, he always pushes back and wants us to use as much of the practical as possible, and the end result is usually better for it.

b&a: For the creature in Lot 36, especially given you’re adding so many tentacles to it, how do you tend to keep the practical? Are you effectively doing a meticulous match move on what the on-set performance was?

Mark Hammond: 100%, yeah. A very meticulous match move process, a lot of paint work to remove green arms and a green head. It definitely takes a lot of work to keep the practical.

The thing with this project is we usually knew ahead of time what was going to be kept, so we would work in two phases. For instance, since the ghoul was such a cool puppet, we really wanted to use him. We roto’d him and keyed him off of the green that we shot because he was a half-scale puppet, and the first pass of the comps were entirely integrated with just a puppet. At the same time, we made sure that we built a 100% photoreal asset of him. We’ve done enough of these projects to know that there’s a chance, even if they don’t want to fully replace him, that they might still, say, want to make his waddle move. So we’d do that with the digital version. And we knew there’d be blinking. We built the whole asset, just to be safe.

b&a: Did you have a chance to do a proper photogrammetry scan with some of these puppets or the character performers?

Mark Hammond: We have a partnership with another company in Toronto called Mirror3D, and they come to set with us and they scan everything. For the ghoul, we also had that in our studio, so we did an abundance of photogrammetry on him. Guillermo’s always been very good. He will give you every prop that you need or that you don’t need, and then they all get taken back and they all go to the manor.

b&a: Just going back to Lot 36 quickly, there’s also the tentacled creature. What are the challenges you might have with generating some of these more effects sim-type effects, but keeping it looking as practical as possible?

Mark Hammond: We partnered with MPC for that creature work. The way we approached the tentacles was to have 8 – 10 hero animated tentacles drive all the rest through a FX simulation / rigging mechanism. MPC did a lot of dev work to make it them not collide through each other and the torso.

b&a: What about Graveyard Rats, where did practical begin and where did visual effects end?

Mark Hammond: On that one, we had a rat wrangler, so we had practical rats on every take. Almost none of the real rats made it to the final cut just because it’s so hard to wrangle rats, and also we couldn’t get the number we needed. So, they were mostly used as photo references.

In the scenes where the rats run over Masson–David Hewlett was a real champ. David would do his performance and then he would sit there and we would put four rats on him and he would be totally cool with it. It gave us an amazing reference for where our shadow contact points would be and how much cloth deformation we’d have to do with the rats contacting him.

Then there’s the beautiful practical queen rat from Spectral Motion, which was both a six foot long rat and a 3 foot tail that the special effects team had rigged up. It was amazing. I haven’t seen an asset like that practically that can manipulate itself as well as that thing could. All of the little nose twitches, those were all done by them. We didn’t manipulate the nose, except for when we had to do a full CG take-over shot to show the rat running. Folks VFX in Toronto did a lot of the rats and the queen rat take-overs.

b&a: Then there’s the rat-like creature Mr. Jenkins in Dreams in the Witch House, which has the human face. How was that accomplished?

Mark Hammond: The VFX for that episode was a partnership with MPC and also with WeFX. The actor, DJ Qualls, came in with full prosthetics from the neck up. He wore a greenscreen suit. The director Catherine Hardwicke and Guillermo were actually both on set directing his performance, so we got a perfect performance of DJ moving.

The asset was built at Herne Hill and then sent off to MPC. They animated him and got the projection setup going. All of the faces were projected onto a scanned version of DJ’s face, except for some of the really wide shots which were a full CG Jenkins. DJ was also filmed with a five-camera array to give a range of angles for compositors to choose from.

He is an odd looking creature. When we first saw the concepts, we said, ‘Whoa, how do we rig this? Is he human? Does he move like a human? Does he move like a rat?’ For some of the performances, like when he crawls up the bed and is sitting on the bedpost, you want him to scurry like a rat and jump with that speed and agility, and he needs to look very fidgety. But then when he talks, it’s DJ’s performance, so you have to go off of his head movements.

b&a: I also loved the blob man in The Viewing. In some ways, this has a number of different creatures, all the way from the rocks to the final humanoid one.

Mark Hammond: On set, there was a blob that special effects made. It was just static for the blob phase when it rises up. We actually called it ‘the head’ because it has a bit of a nose, and then the tentacles are the eyes, and then we had tentacles that can move. They were wired so you could change them, but they couldn’t actually grow or anything like that.

When the rock cracks, it’s a full CG rock. For the tentacle reveal on the blob, Guillermo told us he wanted some sort of suction and puckering motion and it needed to be really gross. Our creature supervisor Atilla Ceylan without hesitation had the idea to make it look like an oozing prolapse so we ran with it. Atilla turned it around in a day and we showed it to Guillermo, and Guillermo, well I’ve never seen him so excited about something. He said something along the lines of ‘That is absolutely grotesque. Why would you do that? I love it!’ 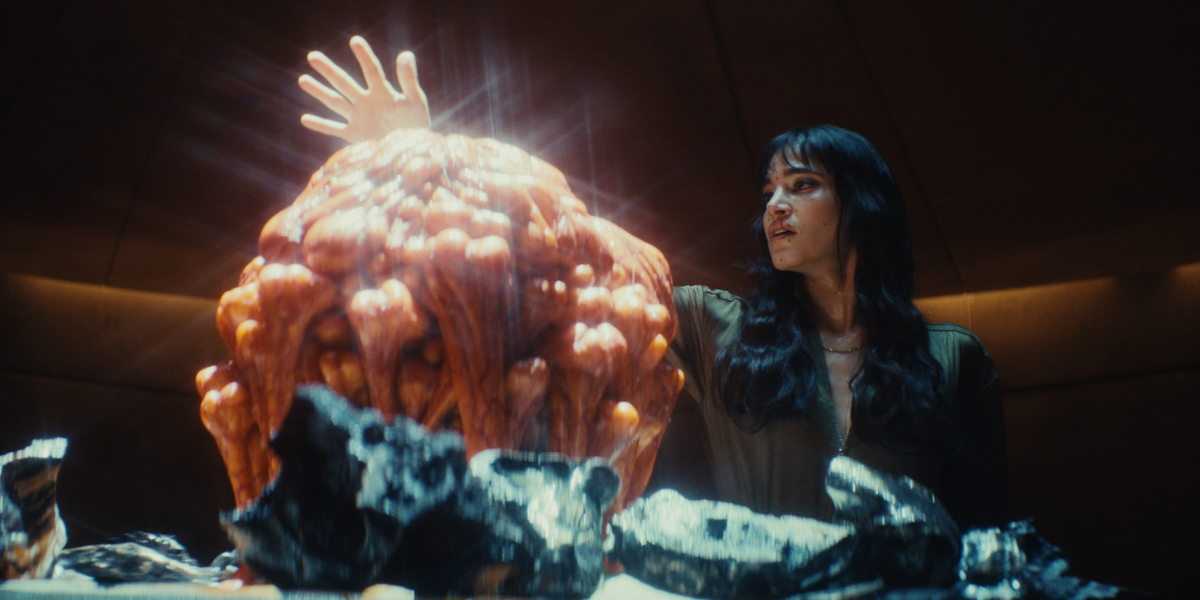 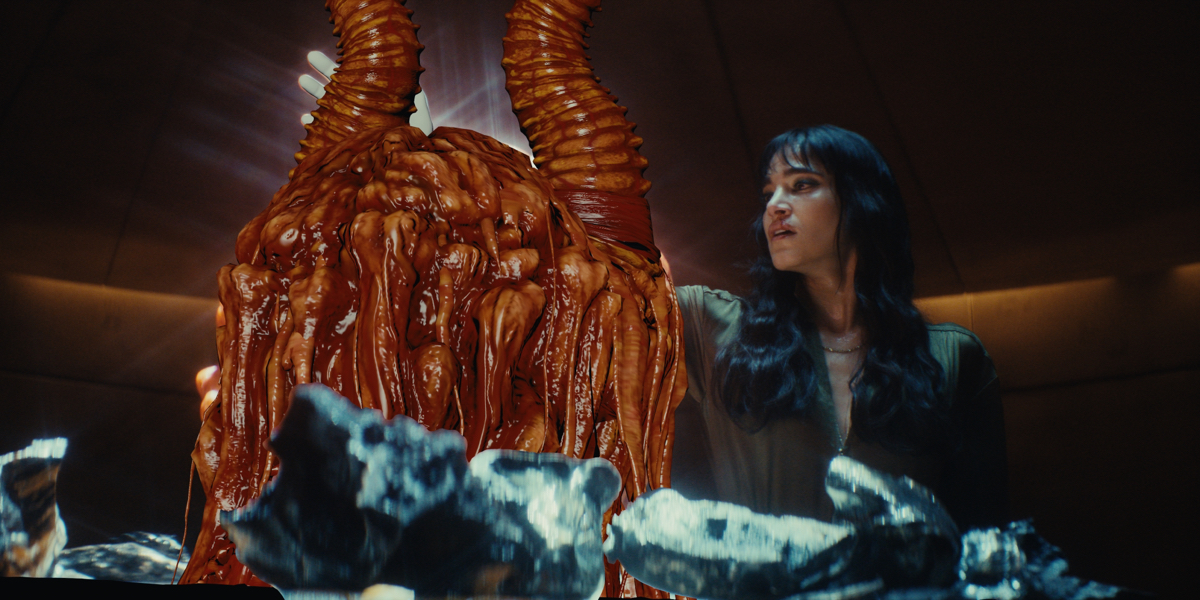 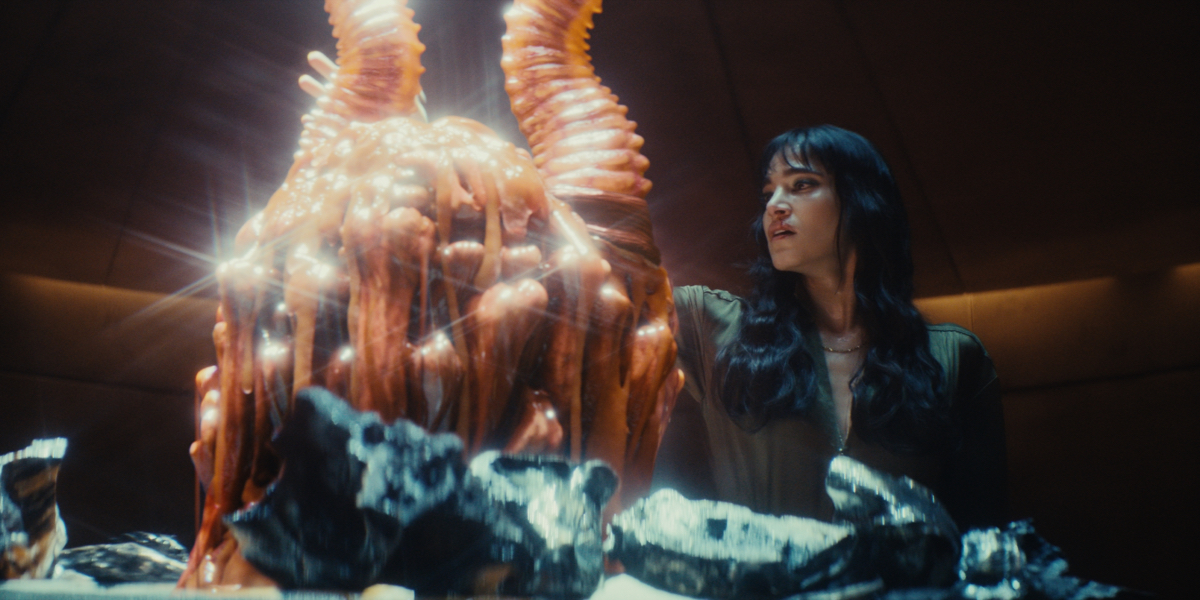 b&a: When it’s more in human form, that was a creature performer?

Mark Hammond: Yeah, that’s actually practical. We then added the tentacles and a bunch of the dripping goo because they didn’t have any drips from the suit on the day. With the tentacles, the brief was that the tentacles are controlling the body, so they should always animate first, and then the arms, the legs, could go second. We always took our cues from Panos Cosmatos’ direction on the set of the actor. 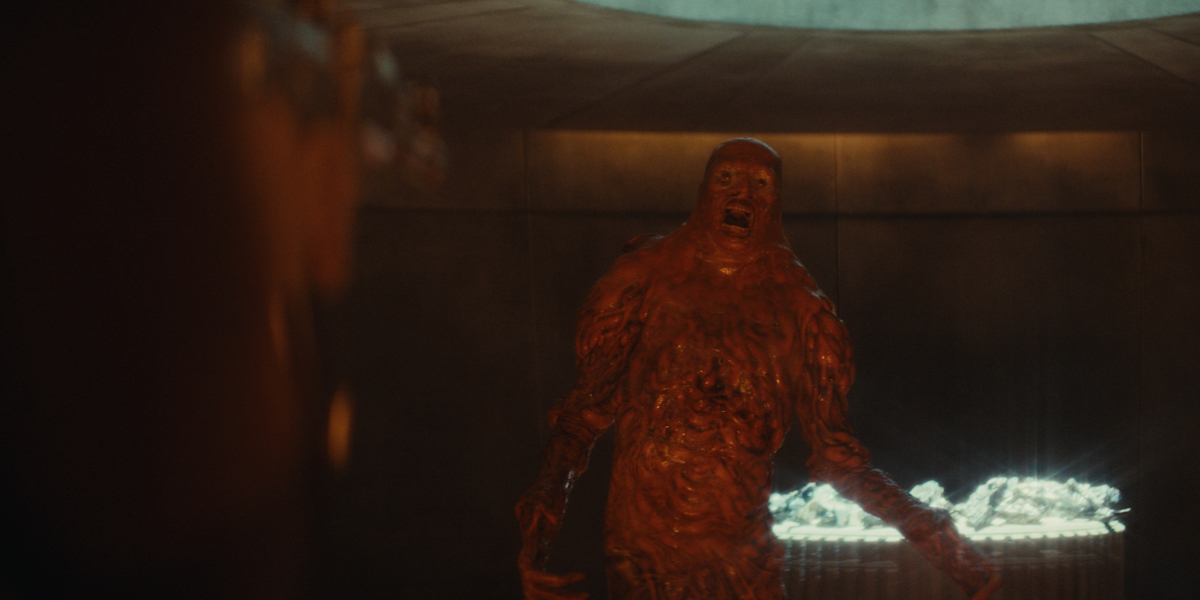 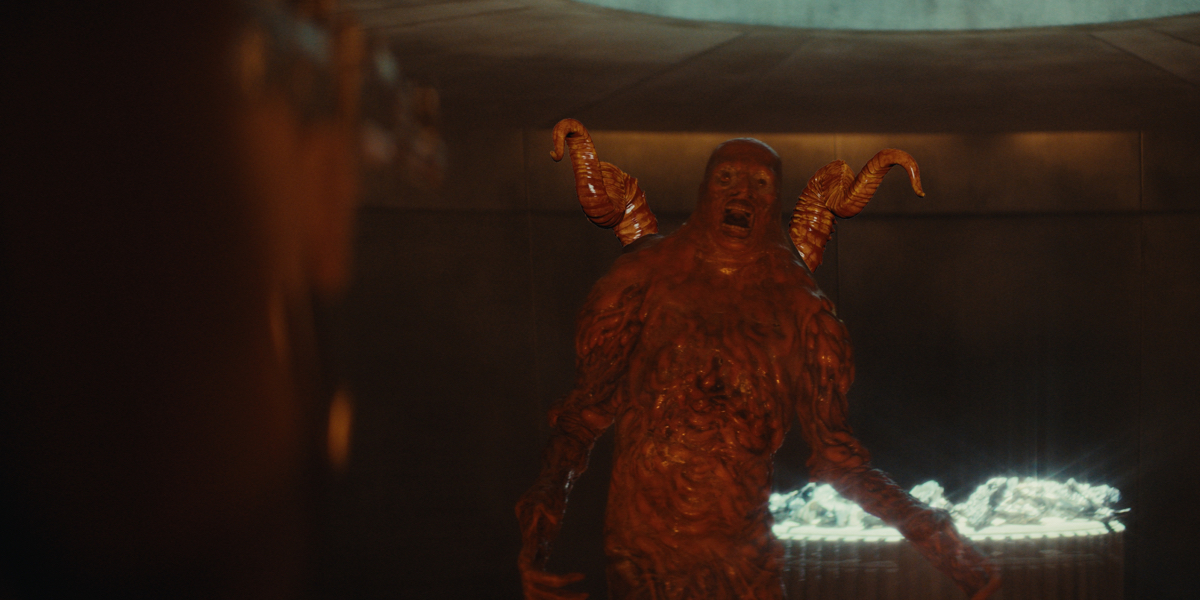 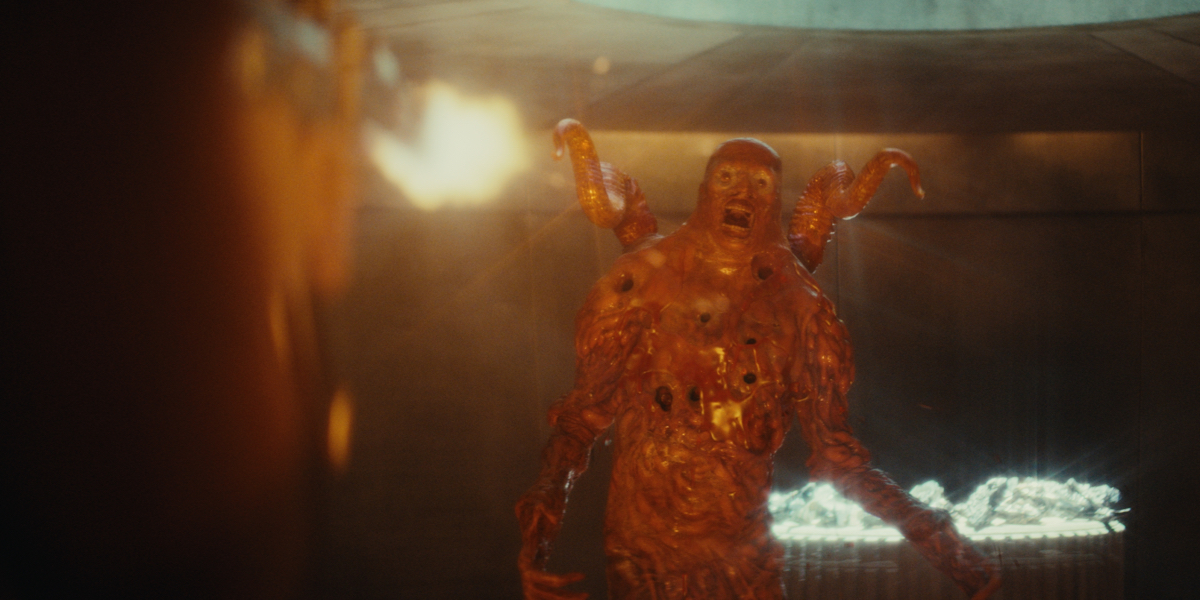 b&a: Was there any other piece of visual effects work or creature work that you wanted to mention?

Mark Hammond: Well, one thing that I think is cool is that there was this shot in ‘The Viewing’ an insert when he’s being injected. It’s a close-up macro shot of the blood coming into the vial and then the blood going out.

They couldn’t shoot that on the day, and they wanted us to do it as a visual effect. They asked, ‘Can you do a liquid sim or something?’ Well, our end solution was that we used our in-house camera with some macro lenses, and used it to do two fully practical shots.

It was actually only meant to be one shot in the episode, but we shot two, and they liked both so much that they put them in every single trailer for the series. It was really awesome for a bunch of us who usually do computer work to be able to film something practically and get it put in the series. That was pretty cool.