When photographer and image-maker Justin Ridler was looking to feature Australian model Astrid Holler in 3D for a Vogue China spread, he looked to Avatar Factory to bring Holler into the digital realm. Avatar Factory, led by CEO and CTO Mark Ruff, scanned the model, delivered the results to Ridler, who then with his team and the magazine placed the now CG Holler in a myriad synthetic environments and ware.

Normally, Avatar Factory carries out 3D body scans and prop scans using photogrammetry via its mobile, cross-polarised scanning truck. But this project presented something different. Find out more directly from Ruff and Ridler, below.

b&a: What was Avatar Factory’s brief for this US Vogue piece? What was the magazine looking to achieve?

Justin Ridler: We briefed Mark and his team to supply us with a highly detailed production-ready scan of the Australian model Astrid Holler. I needed a clean base scan that preserved the essential details of Astrid’s unique look to build the story for Vogue. Details were imperative to get right.

Mark Ruff: This was a completely new engagement for us, the fashion industry! What we were asked to do was very simple, one clean base scan. Talent was arriving from Sydney with the shoot being done in Melbourne, close to the city. No problem for us, since we are entirely mobile with 170 cross polarised cameras, ready to go, set up in a truck.

We also brought in our own industrial strength, super silent, 33kVa generator (45A/phase) and as it turns out, the studio only had 20A/phase so thankfully we were well equipped. Ultimately, it all went very smooth in a relaxed atmosphere – a reflection of the high-end professionals that we work with. 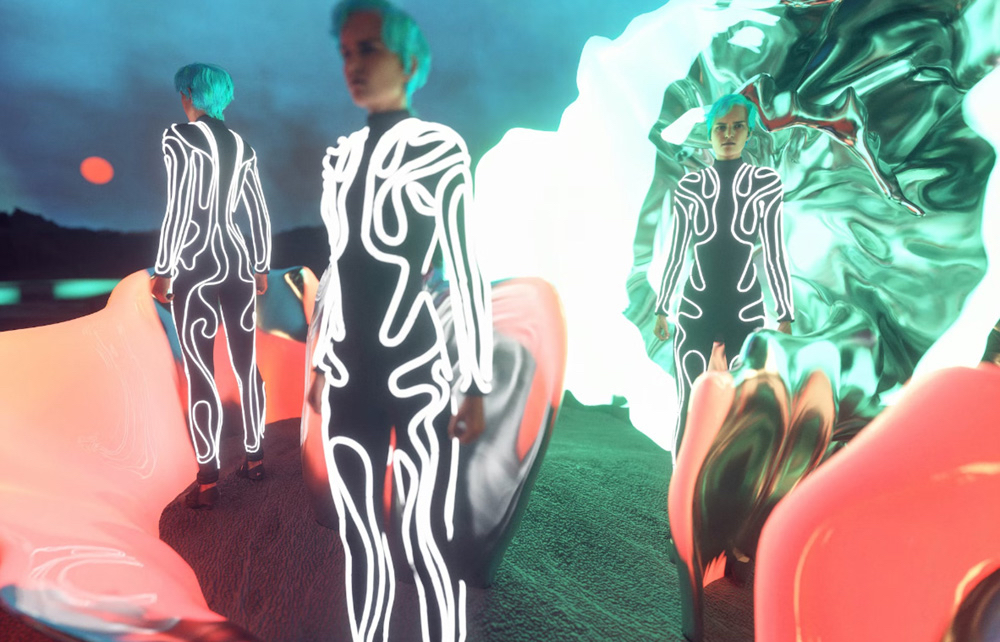 b&a: Can you talk about the photogrammetry shoot for this—what was involved? Was it different than say a normal ‘digi-double’ 3D scan?

Mark Ruff: Most of our film work has been with talent in costume, with or without hair nets. This time we had a leotard as the ‘body form’ which was a little different for us. Skin detail provides a near perfect subject for scanning with plenty of detail, however, the leotard was very low in features, details, and tonality, which can cause problems.

We did not take any chances, and although we used our projection system, we also applied some stars and dots to the leotard, just to make sure.

Fashion models are used to gaining direction from a photographer and enjoy ‘striking’ a pose for usually a singular camera. The technical A-Pose that we shoot with was new for Astrid, and with cameras looking at her from all directions it would have been quite different for her. Of course, she was not intimidated and did it perfectly!

Being a new client, we thought it would be reassuring for Justin to show him a result on the day. So, over the meal break, we put together a ‘standard’ resolution example together in around 30 minutes. Justin appreciated this and remarked on, ‘how clean the low-res model was’.

b&a: What did you deliver to the editorial team, and how did they get started on concepts/designs? How did they ultimately virtualise the garments?

Mark Ruff: Generally, we deliver exr or even ACES to the film industry. This time around our delivery was a simpler, sRGB, 16-bit tiff. We were not too sure as to where the files would go after model creation, so it made sense to make it uncomplicated for downstream users. 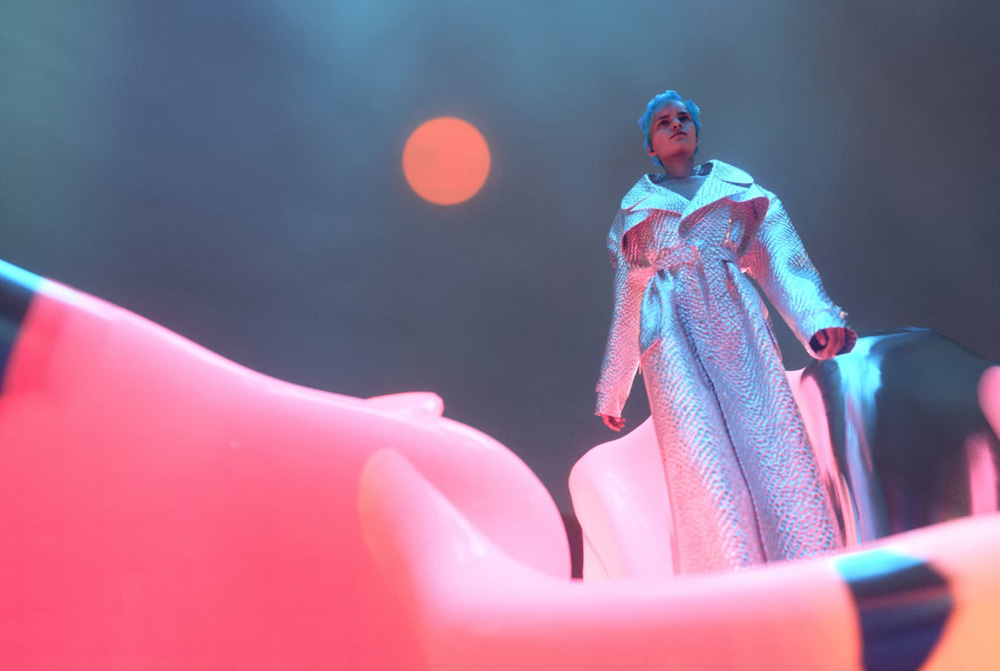 We wanted to supply the maximum level of engagement for a new client and possible expansion of this era of image making for us. We arranged the 3D model to include mouth and eye sockets, tear glands, eyes, fingernails and anything else that could be envisaged, that is, a feature film/AAA gaming approach to quality.

We thought it was an important investment to make. If they wanted to do something and these details were not supported, then there would be no time to go back and do it later. This level of detail in the model, is a basis which they can then choose to utilise, or not, in the future.

Justin Ridler: Once Avatar Factory delivered the cleaned up / retopo’d scan to us, we began creating the avatar. We went through a few rounds of development – ensuring features were preserved while still allowing for the avatar to perform the way we needed in animation.
While this process was occurring, we were also in look dev/build for the virtual set and garments, which were crafted using a pipeline of programs that started in Clo3d and ended in C4d.

b&a: What do you think these scans provided that was a step above, say normal photography or 3D modelling the models from scratch?

Justin Ridler: We intended to deliver images that were impossible to create using conventional photographic processes but still had their grounding in fashion photography. Using avatars expands our creative capabilities.

Mark Ruff: Compared to 2D, you get ‘ultimate creativity’! To visualise and create, on the fly, as part of a post-production process without being locked into a fixed 2D image is a liberating experience. Also, you can create a new product that extends from the pre-visualised with creative freedom.

3D modellers can do an amazing job of creating 3D out of 2D, however, it is a time consuming exercise to build a model from scratch. Multi-camera photogrammetry provides an efficient workflow. Capture is instant and within a few hours, you can expect an exact replica of your talent.

Results are also millimetre accurate, so, if anyone wanted to extend the results to pattern making from the results in Clo3D or Marvellous Designer you can provide this. If you capture in 2D, then you pretty much have to rely on the original lighting and colour design. With a 3D model, the lighting and design can be changed. 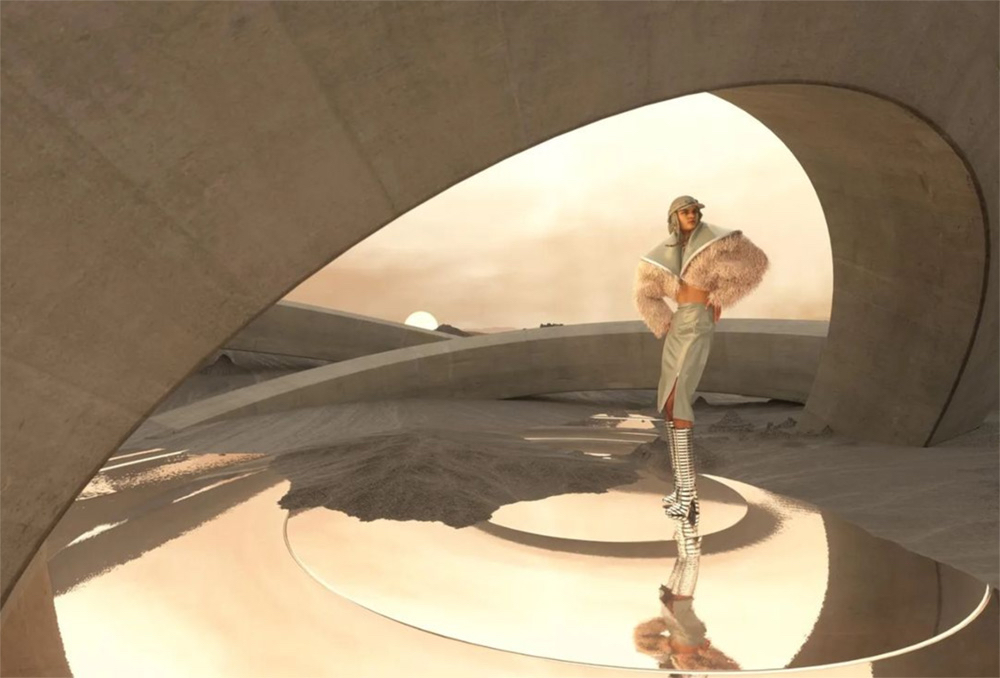 Of course, it’s best to start this process with cross polarisation as the result is cleaner with almost zero specular reflections. Cross polarisation captures only the light reflected from the subject without any interference from the light sources.

Creatively, placing a 3D subject in a 3D environment, culminates a new form. Similar to the new LED walls for virtual production there is a freedom to create something new in an efficient way and ‘on the fly’. You can create ‘environments’ that can’t be purposed without the great effort and expense of creating a result ‘in camera’. As long as you have the environments, you can easily switch to any place in the world to make a new shooting space.
It was certainly a collaborative effort with the creativity of Justin and Sarah providing expertise that extends way above the norm. 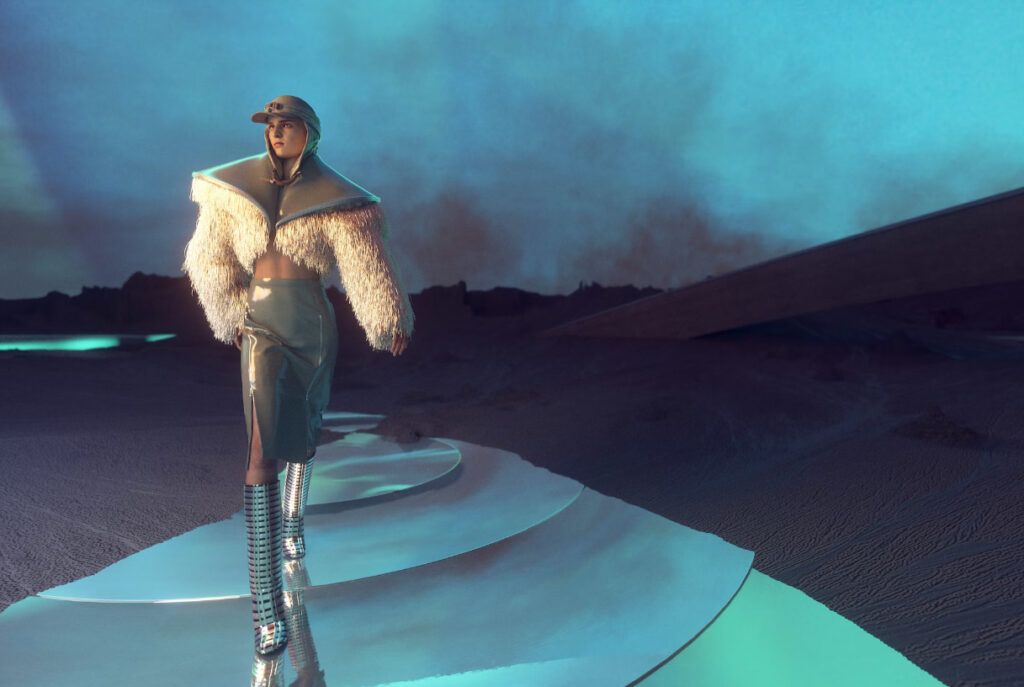 b&a: What are your thoughts about the use of 3D scans and photogrammetry in the fashion world right now?

Mark Ruff: Again, to foster creativity! Many moons ago, I was a commercial/advertising photographer and involved in some fashion work, even 3D lenticular. Once you capture with 2D the lighting, the look, expression, and everything else is ‘baked in’. 3D ‘frees’ you to engage creativity with few constraints. This includes the lighting design – not a 2D photo anymore, a 3D model can be re-lit and re-purposed.

Obtaining a scaled and photo realistic 3D likeness of a person as a starting point provides the opportunity to create poses, garments, and hairstyles with integration into a new scene that is digitally created.

It is an existing pipeline for feature film, so, why not fashion? A model’s face is also very important and reinforces a brand. In fashion, models generally have a ‘vacuous’ or expressionless look. The requirements of a 3D capture ‘base scan’ is an ‘expressionless’ look from the onset, so, this works in very well from capture to production. If required, the neutral expression can be ‘delicately’ altered without necessarily going to the extent of a FACS composite.

Our 48 Mpx cameras targeted for the face provided a clean and realistic result for further enhancement. Models, like A-List actors need not fear of assets been used across different projects. Brad Pitt, with the first major digital double project , ‘The Curious Case of Benjamin Button’, still sees Mr Pitt being scanned for different productions over time. Copyright ownership must be clear and open with data security or there is scope to abuse identities with deep fakes. 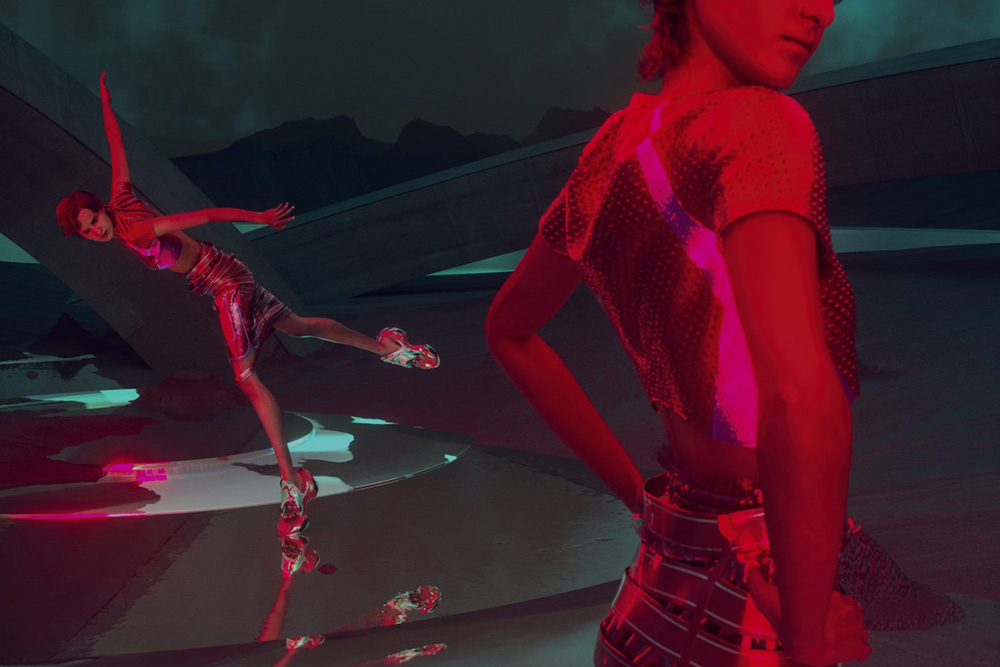 Justin Ridler: It’s been an area of investigation [in fashion] for a while now – it’s nice to see it becoming more acceptable as a workflow. I think photogrammetry, for us at least, is more beneficial for avatar creation than the documentation of garments, but we look at that case by case.

I think it’s clear that it’s an evolving medium with enormous potential in fashion, and the Vogue article is proof of that to a certain extent. 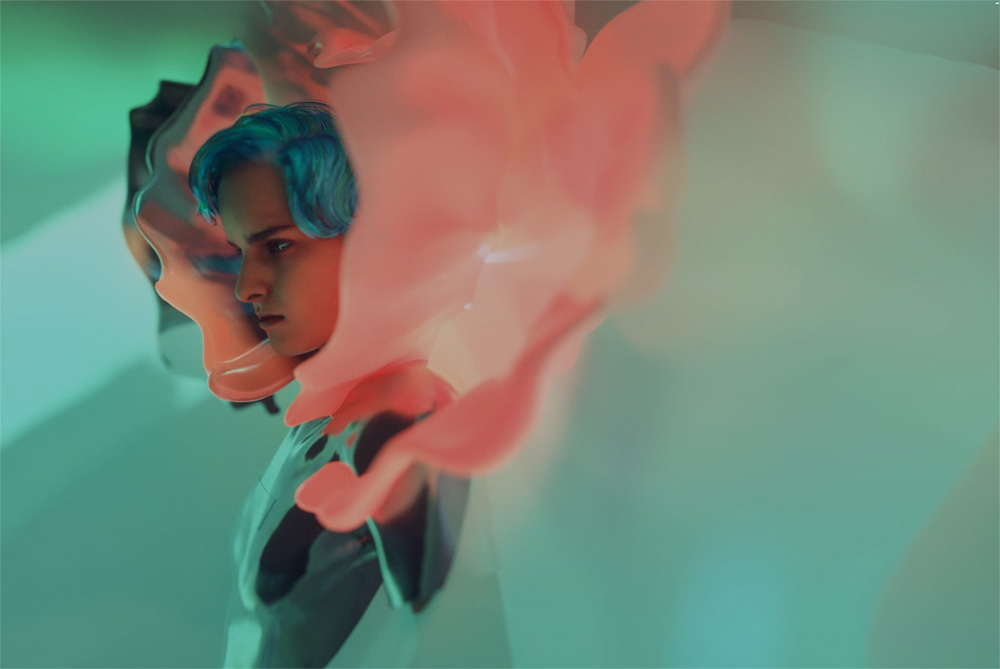 To find out more about Avatar Factory’s mobile 3D scanning in Australia, head to their website at https://avatarfactory.com.au/.

Brought to you by Avatar Factory: This article is part of the befores & afters VFX Insight series. If you’d like to promote your VFX/animation/CG tech or service, you can find out more about the VFX Insight series here.