‘The Bubble’ had some slightly unusual visual effects requirements to help deliver its tongue-in-cheek tale.

The premise of Judd Apatow’s The Bubble revolves around a group of actors trying to make a film while also being ‘trapped’ inside a pandemic bubble at a hotel. The fake film they are making, Cliff Beasts 6, features some elaborate CG creatures, which themselves required a dedicated visual effects effort led by The Bubble’s production VFX team and by vendor Industrial Light & Magic.

But then there was the film behind the film, that is, comedic moments we see in The Bubble of the cast and crew on set making Cliff Beasts 6.

It turns out that the VFX team had a slightly unexpected role in helping to tell that side of the story, too, especially via populating the fake set with stand-ins, stuffies and other visual effects paraphernalia–even if these were not quite on the authentic side.

befores & afters spoke to visual effects production manager Jack Hawkes, who was on the ground for filming of The Bubble in London, about how this VFX task proved different to others he has faced. Here’s an excerpt of the full interview from issue #6 of befores & afters magazine.

b&a: The Bubble obviously has some major VFX in terms of the CG creatures, but then there’s also the ‘meta’ side of it all with film sets and greenscreen and stuffies/stand-ins for the creatures. From your point of view as VFX production manager, did that make this a ‘different’ kind of visual effects project?

Jack Hawkes: Yes, well, when I first joined the show, the thing that we were solely focusing on was the cliff beast. In fact, I would go as far to say, that was it. Then as the storyboards developed, we knew that we weren’t going to be able to get everything that we needed in-camera. So there were going to be set extensions, but the thing to remember was that it wasn’t really about crafting the most beautiful VFX shots for the ‘behind the scenes’ parts of the film, it was more about flashes of brilliance and kind of comedy.

b&a: Right, did that mean the beast shots were kind of the ‘principal’ VFX and then everything else was secondary?

Things changed when we saw more storyboards and there was more action–both in the fake film and the behind the scenes moments. At first we were then saying, ‘Oh well, this’ll be shot on location and we’ll have this kind of forestry etc.’ We thought we might be adding in little bits of background behind the trees or in openings where you’d see stuff. But then came a fairly large bombshell that we weren’t going to shoot anything on location and that it was all going to be done on a stage. From a visual effects standpoint, it’s not the end of the world at all. There are ways to make these things work.

One further challenge, though, came in the form of shooting at the ExCeL Centre in London, which is an event space. It’s got a huge amount of space in it, but it’s not very tall. So in terms of building a set that’s meant to be a mountain, and then keeping cast on greenscreens when they’re on the top of said mountain, is tricky. That was when we said, ‘Okay, the beasts are not the problem anymore. It’s the roto costs and everything that we’re going to have to encompass, trying to keep these people on greenscreens, on a set where we don’t have greens rigged high enough.’

Every day we would be flying greens in as best we could. We had Simone Coco, who was our VFX set supervisor, and myself, and Dan Pearson, our VFX wrangler, running around with stand-by guys going, ‘Right. We’ve got to get a green in here somewhere. There’s a big gap here. We’ve got to try and fill that. I know that’s in the roof, but can we do something here?’

b&a: When it came time to film some of the cliff beast shots–including the TikTok dance–even though it’s meant to be comical, did they try and shoot it with any stand-ins like you would if it was a real dinosaur movie?

Jack Hawkes: Yes, definitely. We kept it to the basics of how you would normally shoot a proper visual effects shot with a creature. We’d always shoot a number of passes with the cast. We had a choreographer who made up all these dances. They would go through the dance beforehand. We’d say, ‘You shoot the dance and then all we ask is that, at the end you take the performer out and we do a clean pass.’ That clean pass acts as a clean-up for getting rid of our performer.

Sometimes, the cast would say, ‘We can do it without the person in.’ And we’d have people off-camera, essentially playing music or calling out the cues. In a strange way, it wasn’t quite as bizarre as it would be because it’s what we’d normally do anyway.

Judd would occasionally look to shoot another pass, because he might actually want to cut out of this and show the performer, remembering that it was meant to be a behind the scenes of a film shoot. For that, they’d get one of the two guys who they had playing the beasts with the green head to be ready for it–you had to be organized to know whether this was a stand-in shot for the real beast or a behind the scenes shot.

In fact, initially, when we had our early production meetings, there was some talk that they would even just let the crew be in shot because sometimes it might look good, it might lend itself to the aesthetics of the behind the scenes nature of the film. In the end, I think sense prevailed because we’d say, ‘Well, if you choose to use that as a real shot in the movie, we’re painting out a ton of crew.’ So the ADs quite rightly tended to pull everyone out of the shots. They had their own extras that they would dress into shot when they needed to. 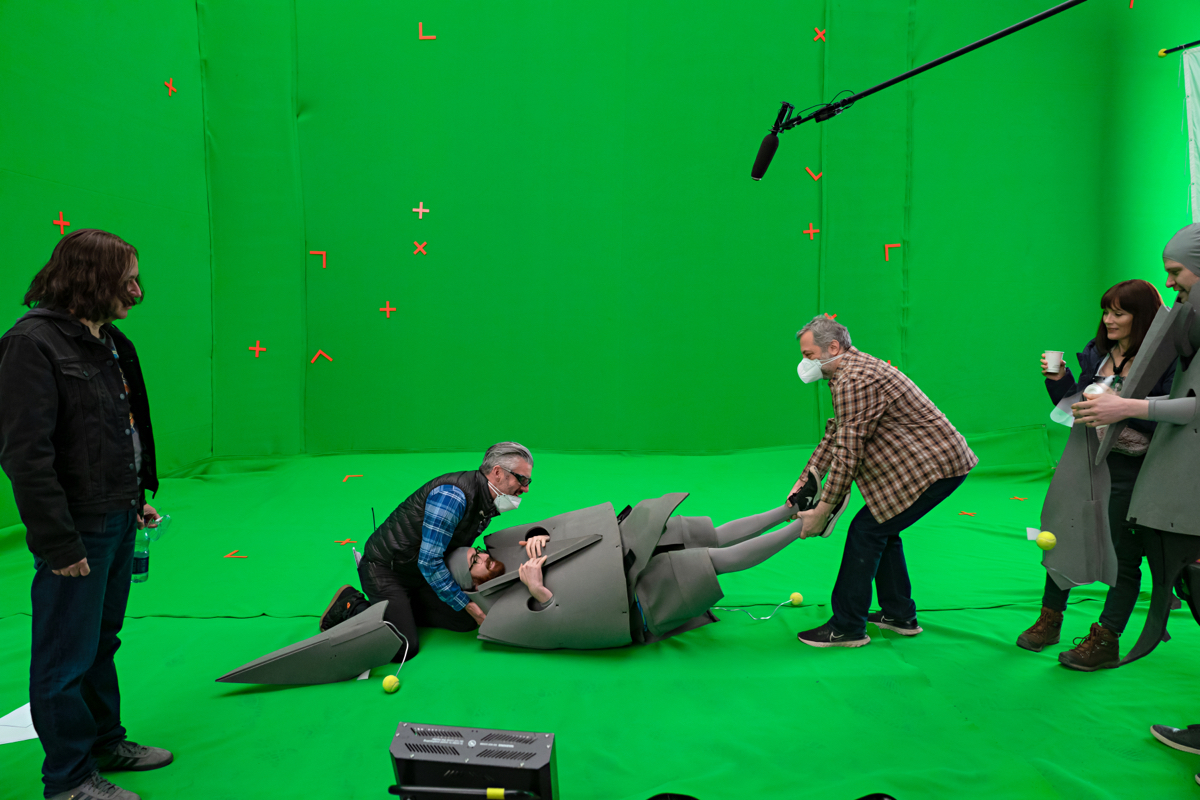 b&a: The greenscren head, and the ‘mocap men’ and their foam costumes–did you in VFX production have a role to play in the development of those props at all? Oftentimes when those kinds of things are made for a real film, it tends to be the domain of costumes or props or SFX. Just wondering if VFX had a hand in them here?

Jack Hawkes: Actually, the art department would ask us, ‘Hey, look, if there was a visual effects crew on set, what would they use?’ We showed them all the kit that we had–magliners and cases and boxes and eyeline sticks and silver and gray balls. They went away and made a faux visual effects kit that they could dress around set.

For stuffies, normally it’s very much driven by us. We’d usually talk about getting it made professionally and as close to the CG character as it could be. Here we originally didn’t aim to try and have a photorealistic stuffy head made for the movie, because I think at the time we were still developing the look of the cliff beast, and realistically ILM weren’t screaming out for something that they could literally reference there and then. They were quite happy just to take the stuffy and the silver balls and all the other kinds of set reference to help integrate their creature.

Then, interestingly, a few days before we started on the cliff beasts set, someone came to me and said, ‘What are we using for an eyeline?’ And I said, ‘Well, we’ll just use eyeline poles.’ But then there was a preference to use a creature head.

I ended up going back to Mark Tildesley, the production designer, to ask, ‘Look, I need an emergency favor here. Do you know anyone who can 3D cut a dinosaur head from the model for us?’ And he said, ‘Yeah, I’ve got someone who’d be able to knock it together.’ This guy was fantastic. He literally pulled it out in a day and came back with this beautifully 3D-cut green head on a stick. They 3D cut it out of polystyrene and then just mounted it onto a pole and then sprayed it digi green.

As soon as that turned up on set, it became the thing we put in every shot. But it had been a bit of a scramble. People had been saying, ‘Where’s the head? When’s the head going to turn up?’ In the end it worked out great.