What do you think? Is this list close, right on, or completely way-off?

Every year, beginning around about now, speculation mounts as to which films might get nominated for an Academy Award for Best Visual Effects. But wait, isn’t it only September? And aren’t there a number of films still to be released in 2022?

What I’m interested in here is postulating the list of 10 films that could ultimately make the VFX bake-off typically held in early January that then results in the final five nominees.

Getting to just 10 films is always hard. Why? Well, the standard of work is just simply incredible. Also, it feels harder to judge the ‘impact’ of some films and their visual effects these days given their different presences on cinema screenings, and then on streaming. I’ve tried to give a sense of why I think that film will make the list (you can see the Academy’s rules for the Visual Effects award here).

So, OK, here goes. Do you agree, strongly disagree, or have other suggestions? Let me know in the comments.

In my view each year there tend to be at least three films as front-runners for bake-off inclusion. This does not mean one of them will definitely be a winner (since occasionally a film seemingly out of left-field will wow audiences with a different kind of VFX approach, and win). But there’s always at least three that have such a big VFX impact that they make the list. My three are:

Avatar: The Way of the Water: I know, I know. It’s not out yet! But it’s clear that some next-level visual effects work has been crafted for this sequel to James Cameron’s Avatar, especially in the realm of performance capture, underwater performance capture, and the rendering of realistic above and below-water imagery. Just the commentary online about a single close-up shot of one of the characters gripping onto a creature (all CG) gives an indication at the level of photorealism in store. And pushing the art forward is part of this film’s appeal in terms of VFX awards recognition, as is the ‘in-cinema’ experience, which in fact is a big part of all these front-runners mentioned here. 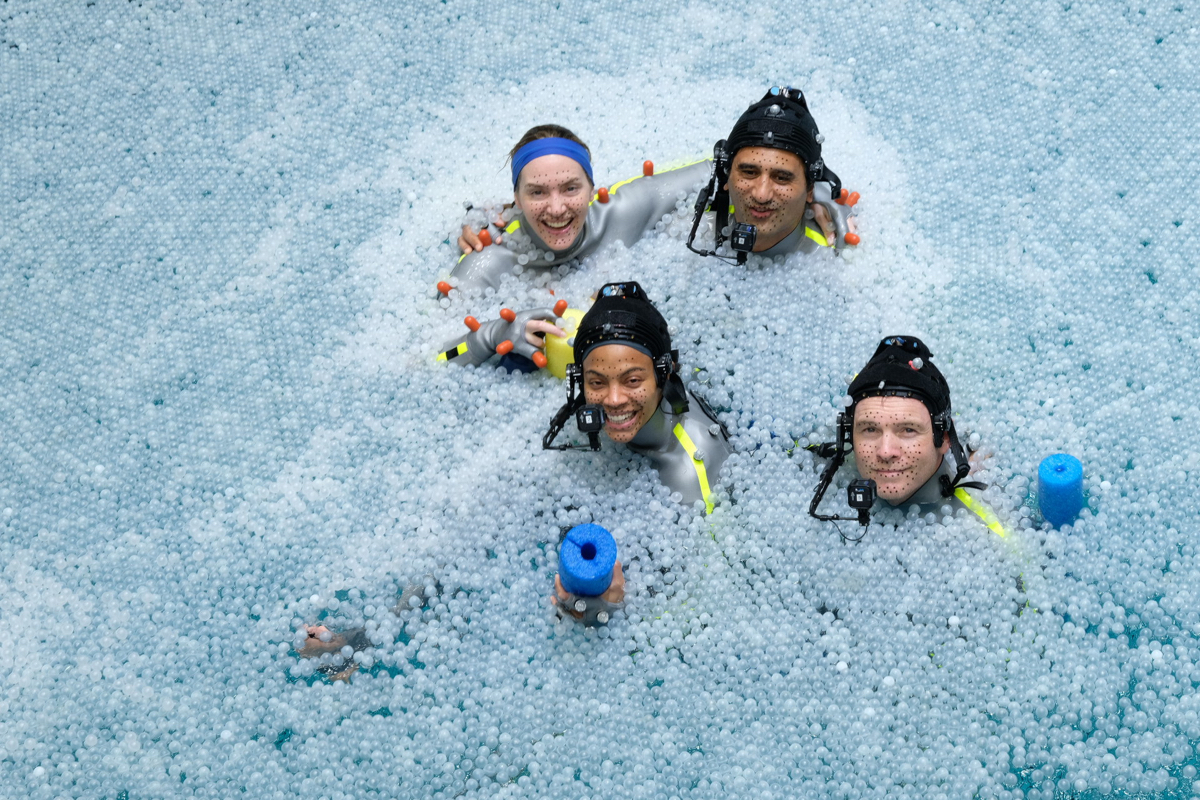 Top Gun: Maverick: As a VFX journalist, I am perhaps more keen than most to cover the visual effects of this film. So far, of course, the studio has resisted showcasing this side of the movie (a very big side), and instead focused on the actors being in real cockpits flying in real planes. Granted, that is a fantastic aspect of the film and one I loved. I actually think the VFX in the film complements that aspect tremendously, in a similar way to the addition of digital VFX to the stunts and SFX of Mad Max: Fury Road. Indeed, once audiences learned of the level of VFX additions in George Miller’s movie, I think they respected the practical effects even more–I feel the same thing will happen with Maverick. 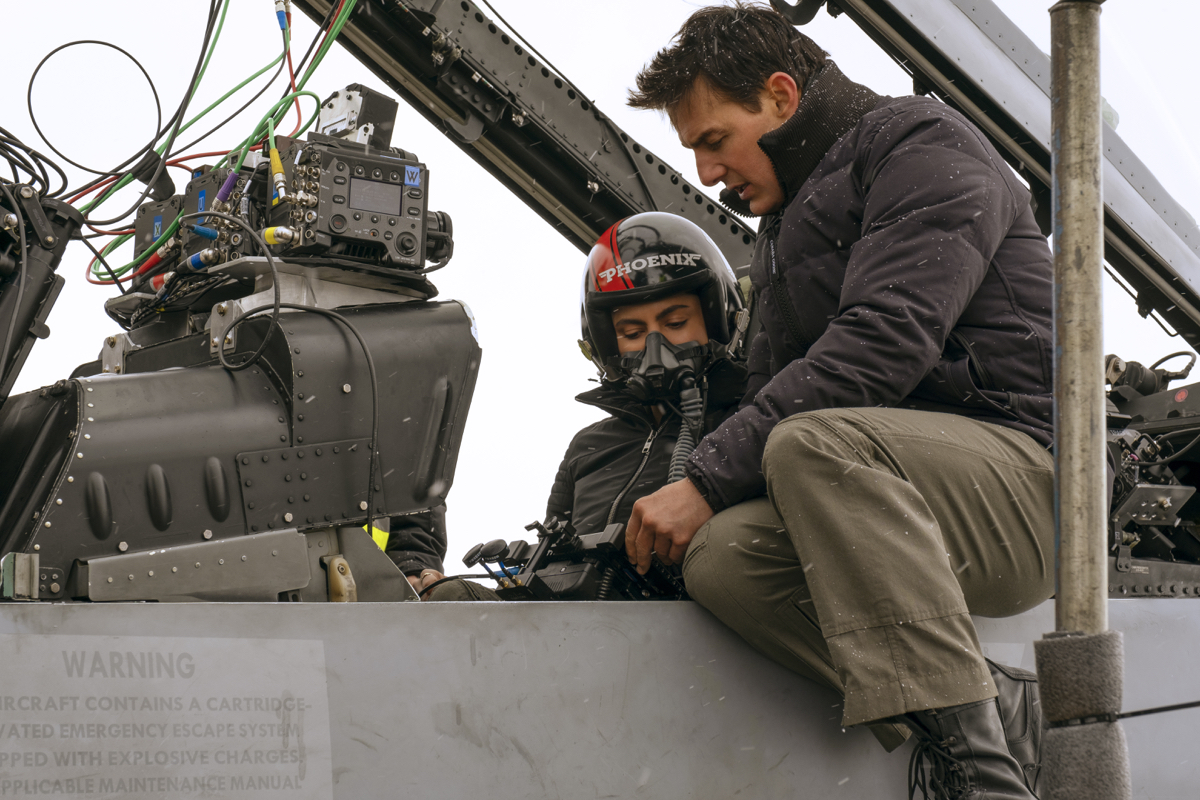 Nope: Here’s an interesting thing about Nope–because the filmmakers and studio were likely trying to avoid spoilers before release, much of the intricate and spectacular visual effects work in the film was NOT seen in trailers or clips. You had to see the film in the cinema to witness the very clever alien entity work, sky replacements, the brilliant chimp animation, and the day-for-night infrared results. I think the result is that audiences (and voters) are or will be quite surprised by the extent of VFX in the movie, one they may have thought was much more of an ‘invisible’ effects film, which, frankly, in past years have tended to take out VFX Oscars. 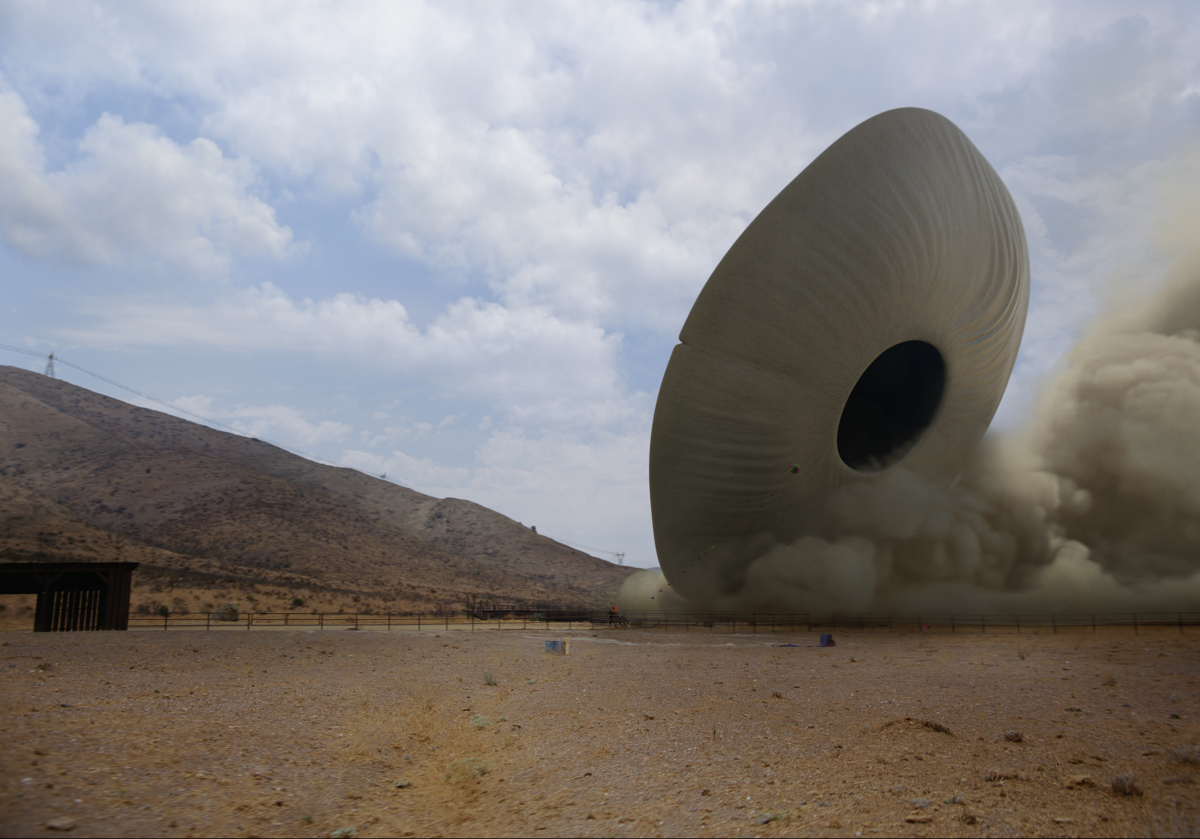 Those three front-runners above are certainly VFX tentpoles. Here are the others that I think will definitely make the list.

Doctor Strange in the Multiverse of Madness: Creatures, digital humans, digital make-up effects, entire worlds and magic. While these elements are perhaps a VFX staple of many Marvel films, in Multiverse of Madness the VFX are often eclectic and surprising, with a stand-out sequence in that way being the crazy–and lengthy–multi-verse jump. 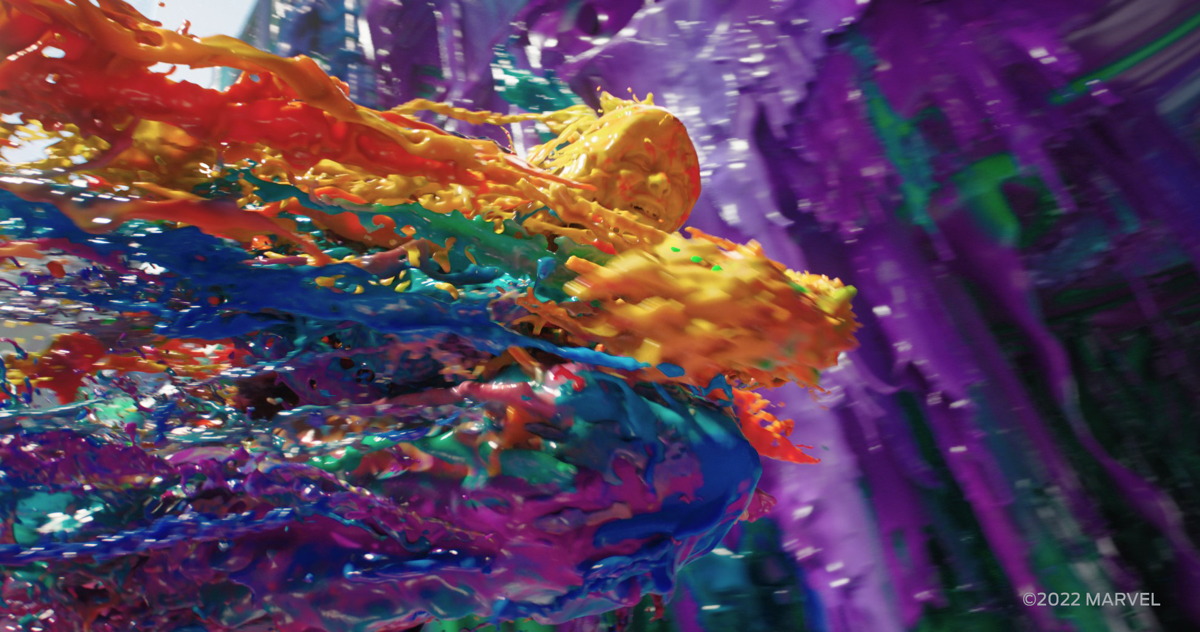 Fantastic Beasts: The Secrets of Dumbledore: A very strong aspect of the visual effects work in The Secrets of Dumbledore is the planning that went into them. I’m talking mainly in relation to the Dumbledore/Credence wand fight, which involved an elaborate stage of concepts, early steps, previs and virtual production to pull off. There are also some virtual sets crafted for the film that many will not even realize were carried out.

Jurassic World Dominion: If there was one big effects take-away from this third film in the Jurassic World series, it’s the strong emphasis on mixing practical animatronics with CG dinos and creatures here. Even to the point of keeping an animatronic head in frame and filling out the rest of the dinosaur synthetically. That felt like a welcome return to the roots of the entire franchise, which of course changed the game in VFX forever. 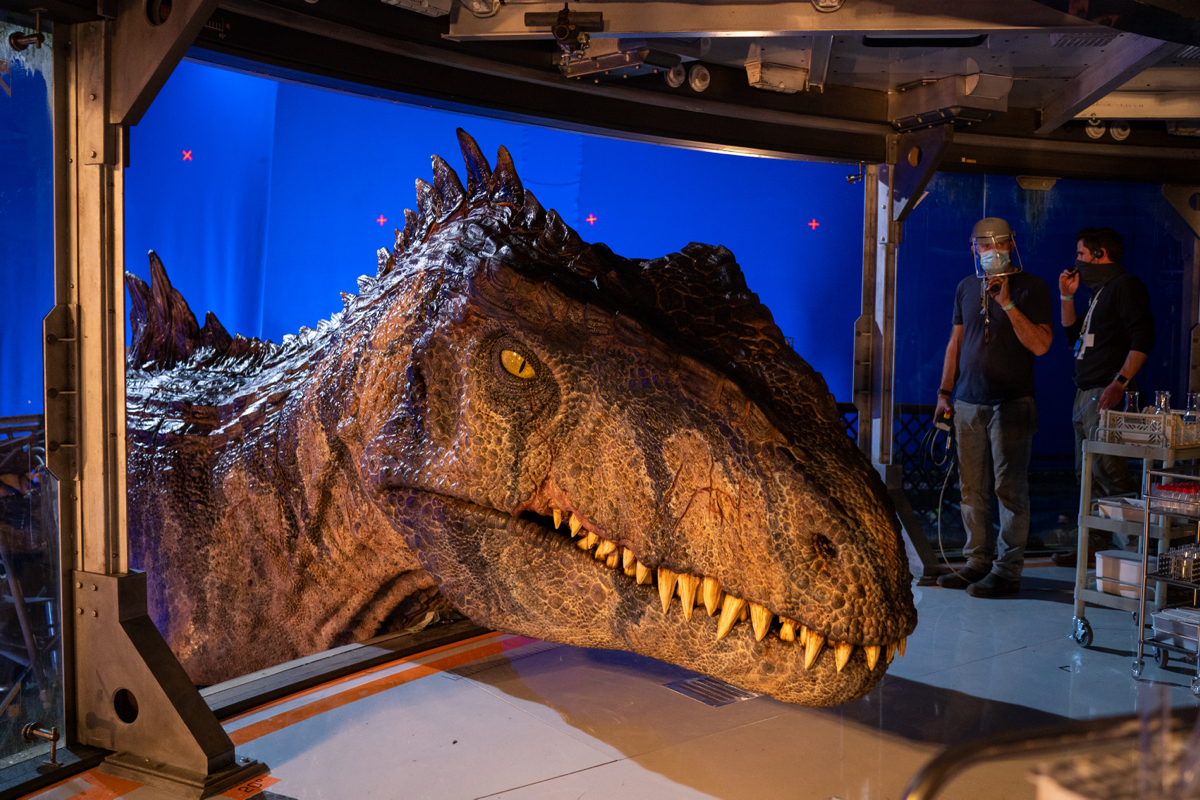 The Batman: Practical and digital are heavily mixed again in this film, possibly even more than audiences at first knew. But it makes for a very gritty and visceral experience, particularly in the absolutely spectacular Batmobile/Penguin car chase, where real stunts were expertly combined with elaborate CG vehicles, roads, rain and digital elements.

Thor: Love and Thunder: Sometimes I feel like a film might make the bake-off list off the back of a stand-out moment or sequence or visual effects, at least to some degree. I believe that’s the case with Love and Thunder and its use of a specialized lighting rig to help create the Moon of Shame and some other beautiful fighting sequences in the movie. 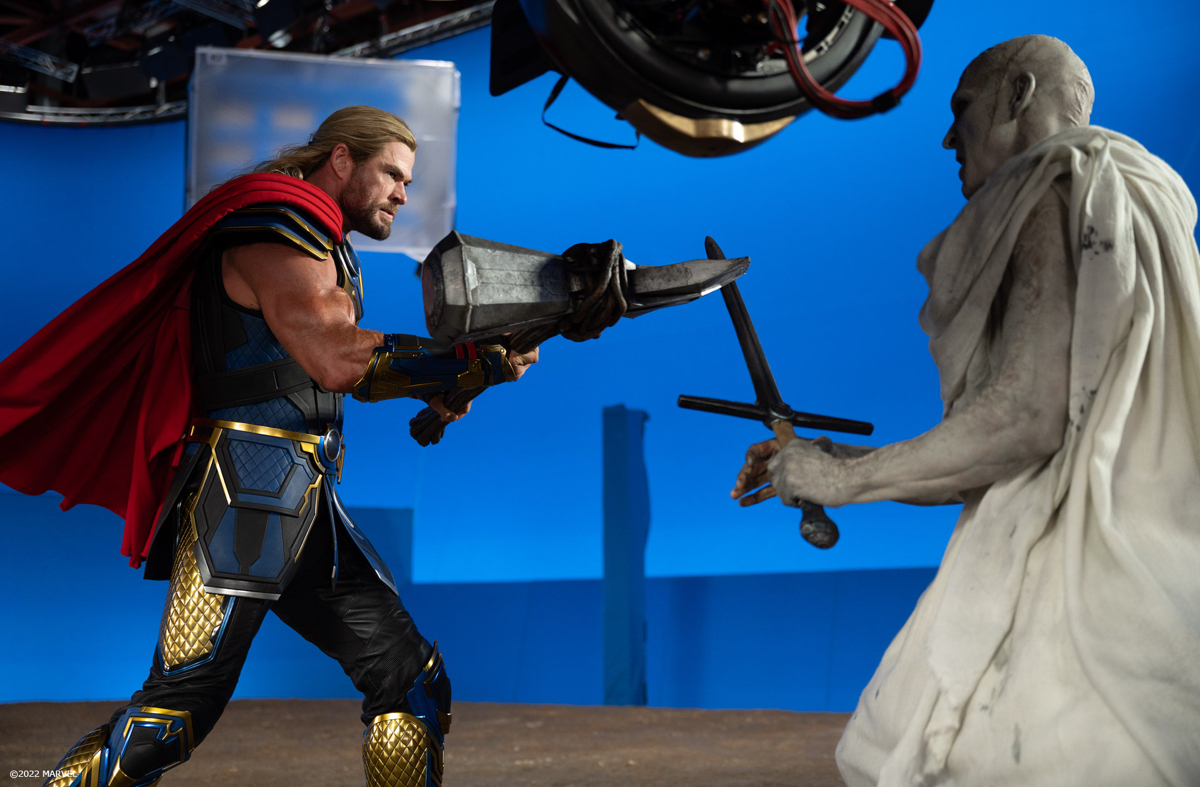 Every now and then, there’s a VFX contender that makes the 10, then the 5, and sometimes even goes on to win, that comes as a big surprise to many. It can be an invisible effects film, or one that simply captures the hearts of both VFX branch members and then all Academy voters. My pick for this outsider is…

Everything Everywhere All at Once: This is actually a relatively big VFX film (more than 500 shots) with the vast majority of them crafted by only 7 artists. And they fit perfectly into the film’s frenetic narrative. What’s neat, too, is that they were seemingly achieved with some low-tech approaches, and a number of practical solutions, including for audience-favorite Raccacoonie. This film has a very high chance of making the final five, in my view. (Could Men be another outsider here? I couldn’t help but bring it up…) 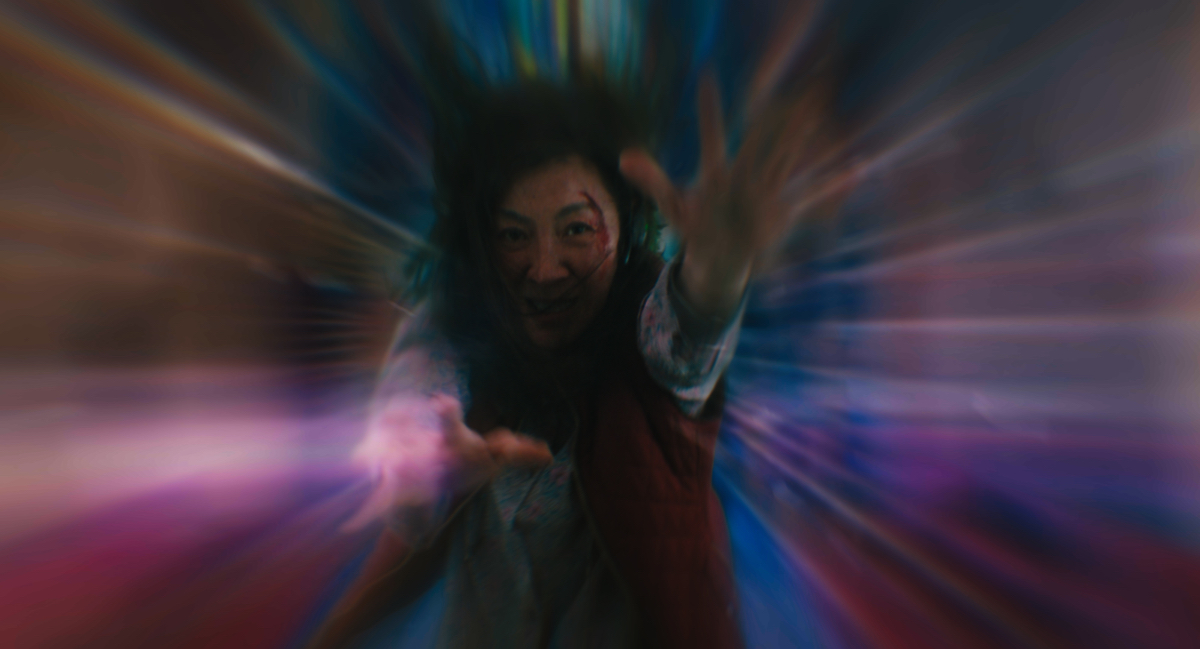 The other one that isn’t released yet

As mentioned, several films for 2022 release are yet to be shown to audiences. Of the unreleased movies, there’s one, I think, that looks like it could make the 10.

Black Panther: Wakanda Forever: It’s impossible to know the extent of the VFX work in the film, but from the teaser trailer there appears to be underwater creations, significant fight scenes and plenty of world building. Much intrigue exists in terms of the death of T’Challa which will be dealt with in the film.

Well, that’s my ten. Of course, all this is just speculation, and come December my own list may morph around a little. I’m very excited about a number of other films also due for release before the end of the year.

Also to note is that there’s always the chance that the VFX branch looks to include CG animated features and stop-motion animated features in their long or short lists, which also use incredible VFX techniques.

What do you think? Let me know in the comments. And stay tuned, the race has only just begun…

One Reply to “Total speculation: the 10 films from 2022 that could make the VFX bake-off”