The VFX behind Wētā FX’s star creature in ‘Peacemaker’.

Arguably the stand-out star in James Gunn’s Peacemaker series isn’t one of the human characters. Instead, it’s Eagly, the bald eagle pet to Peacemaker (John Cena). The creature is a completely digital creation by Wētā FX, which referenced a real bald eagle and took the character just a little further.

some people think that all my impressive feats are just visual effects. well here's proof that only some of them are pic.twitter.com/xlCF7ICOCV

b&a: I’m sure that there were people out there who watched the show that assumed that a trained bird was used on set, at least for some of the shots. I just wanted to ask you upfront, was there any actual real bird used for on set performance at all?

Mark Gee: Interestingly, I saw that James Gunn had tweeted that they did cast a real bird originally, but they didn’t use it on set because what James wanted the bird to do, the bird just couldn’t do. And so, the rumours are that a real eagle was cast, but obviously we went CG at the end. And my favorite pastime has been watching the Twitter feed where people were saying, ‘Oh, I’m having arguments about whether the bird is real or CG.’ It’s always good as an artist to read things like that, when people just can’t tell the difference. 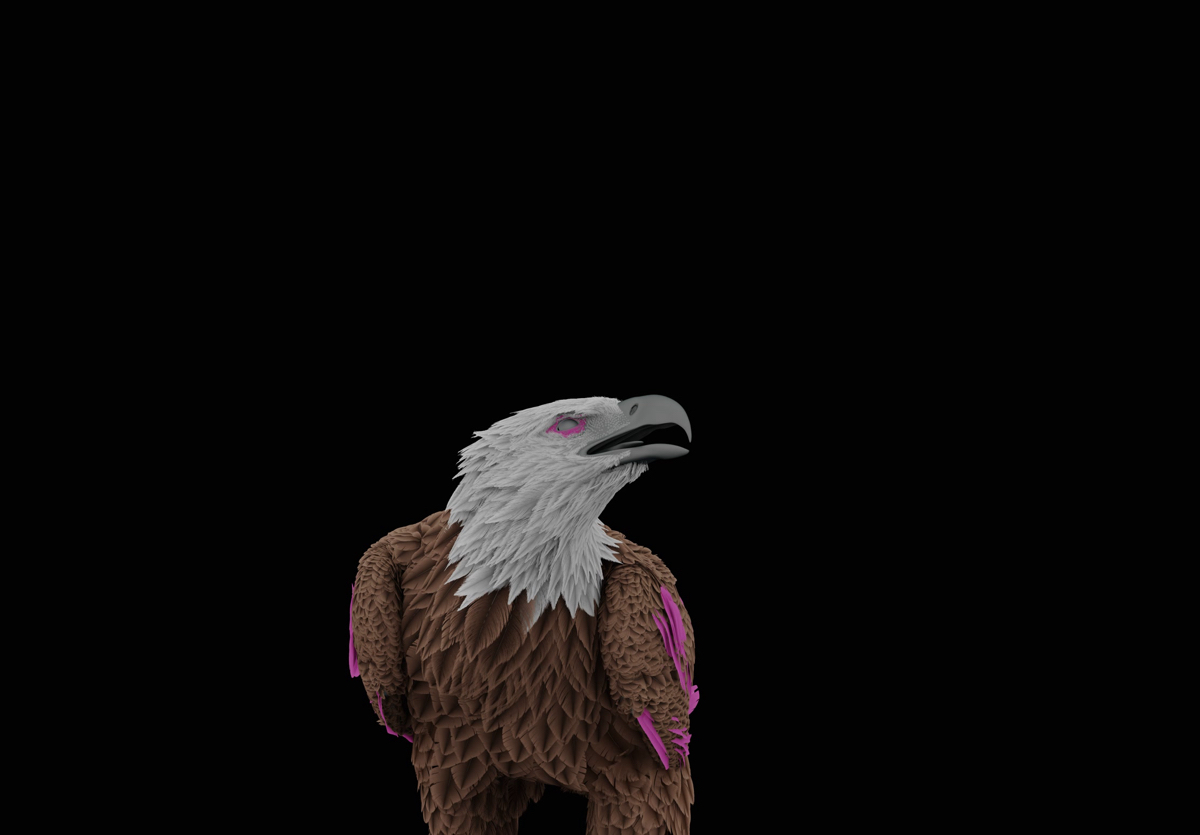 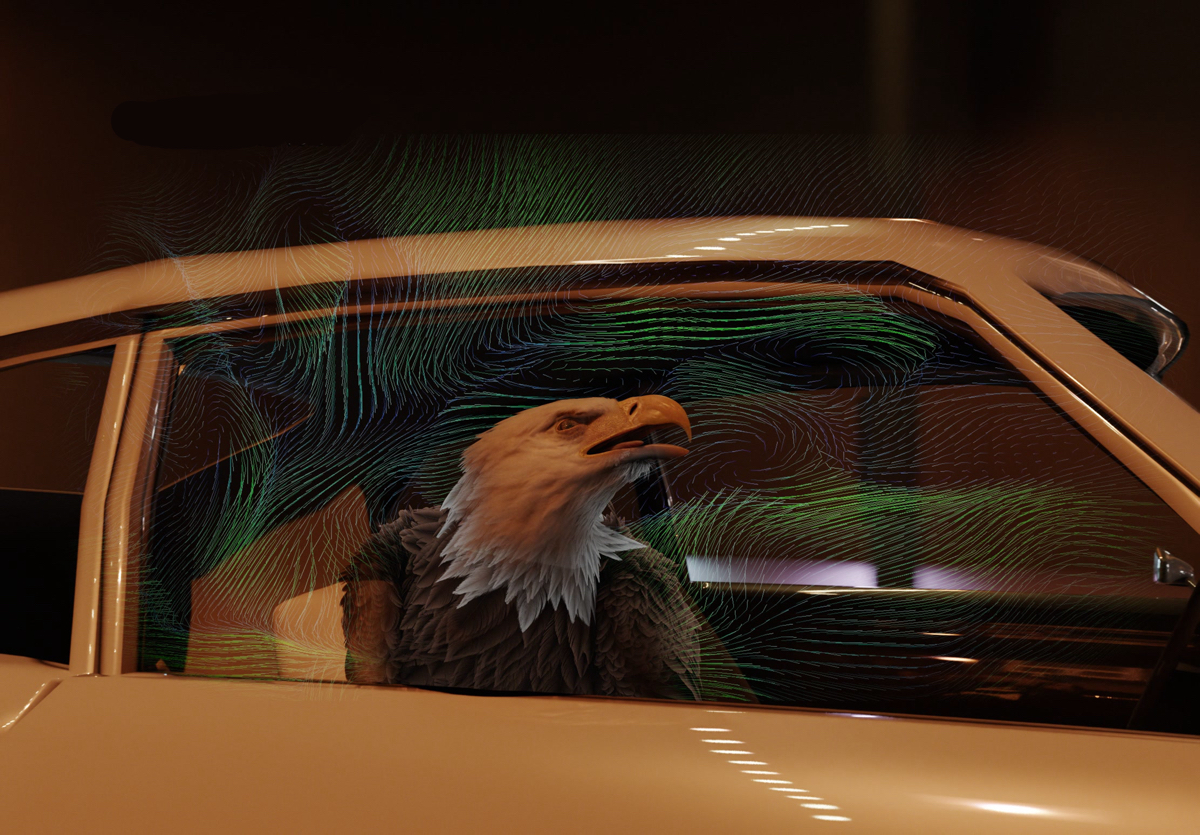 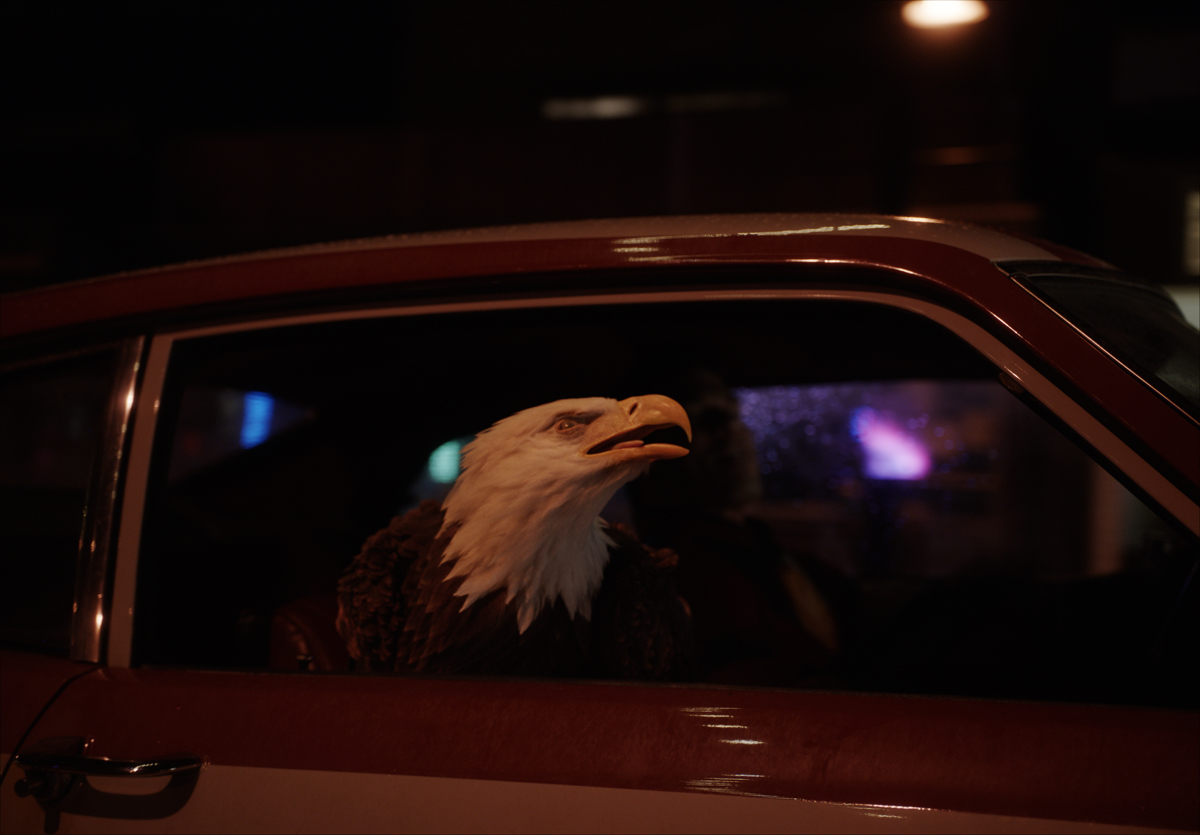 b&a: In terms of a real bird and reference, where did you go to for that, and what did you look at, to start the process of building Eagly?

Mark Gee: We started off with our friend Google and just referenced bald eagles. It was a huge learning experience, especially for me not having much to do with birds in the past. There was some really good reference from up in Canada of just a bunch of bald eagles on the boat and bald eagles walking along the shoreline. With a lot of this reference, we used it to do our animation against and to try and match to that. It’s what we like to call the Pepsi Challenge, where we line the reference up and line animation up and try and make it look as close to the bird as possible.

The hardest part for us was the feathers, of course, and simulating the feathers into Eagly. That was a real challenge. We spent a lot of time breaking down, what was an eagle feather, and what were they made up of? In fact, bald eagles have around 7,000 feathers or so. In Eagly, we ended up with about 9,162 to be exact. It was also about the way the light reacts to them and what happens when they fly and what happens when they land. They get all this turbulence under their wings, and you see feathers moving as they come in for landing and those sort of things.

Jason Galeon, who was our CG supervisor, spearheaded the whole thing here and worked with the pre-pro departments, like Creatures and Lookdev. Those three months, we just spent every single day looking at reference, building, building feathers, building the model, and trying to get closer and closer and closer to Eagly.

Honestly, I would have to say that it’s the best bird that Weta has ever done. As an example, in previous shows, we’d had to shot-sculpt feathers in almost every shot, just to make it do the right thing. We set aside a budget to do that in this show, but we ended up shot-sculpting perhaps only three shots out of 200 for Eagly. That’s a huge testament to the team, especially Creatures. 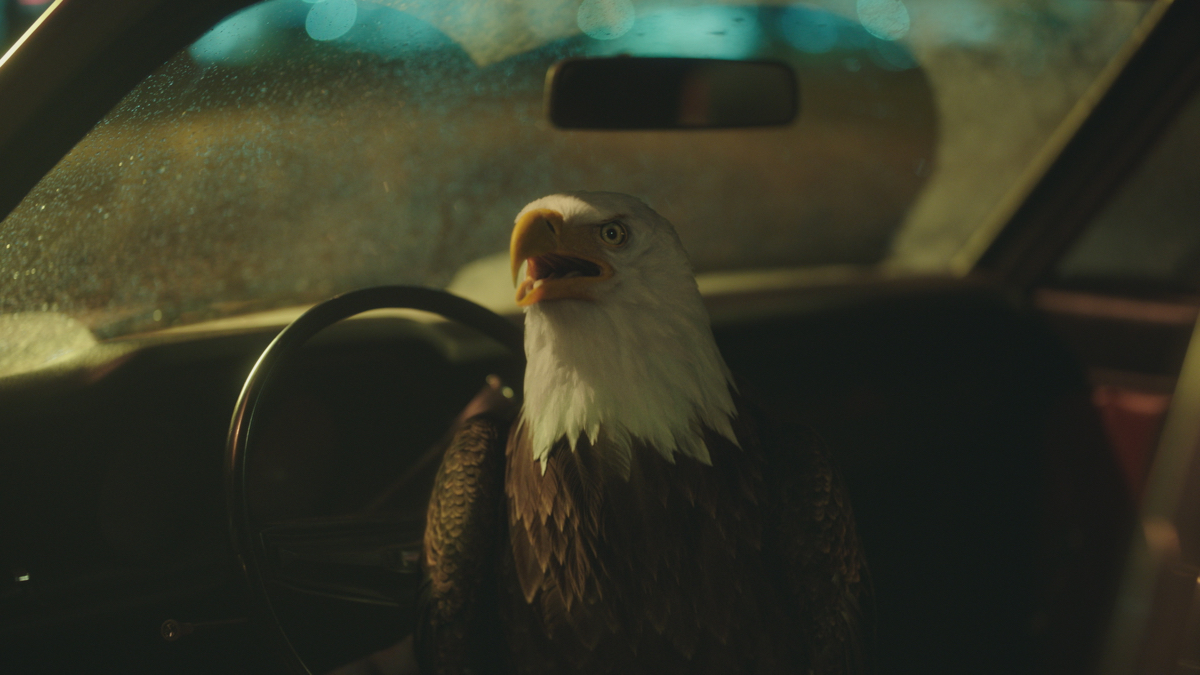 b&a: With Eagly, he has to do things that are bird-like, but also he has to interact with the characters. What were the tricky things that were sort of the invisible side of that work that you wanted to mention?

Mark Gee: Well, when we first got the garage shot, and we saw the hug was necessary, we thought that was going to be a huge challenge. As it ended up, it was one of the easier parts. The hard parts were just getting the feathers to lay down flat. We ended up coming up with a technique where we grew the feathers out and then simulated them, so they would lie flat so you wouldn’t get the inner penetration.

Every time we had a shot where we looked from behind Eagly and looked up into the feathers, sometimes it just looked like a porcupine because it was just impossible to get the feathers down. So Creatures spent a lot of time trying to get that technique working and they did a great job of that. It was also the look dev side of things, with feathers, you’ve got absorption and transmission to deal with.

The garage shot wasn’t a very friendly lookdev shot at all because it was fairly flat lighting, and we just couldn’t get Eagly to look like a real eagle to start with. So we went through the stages of lining up real reference, actually we spent weeks and weeks doing that. 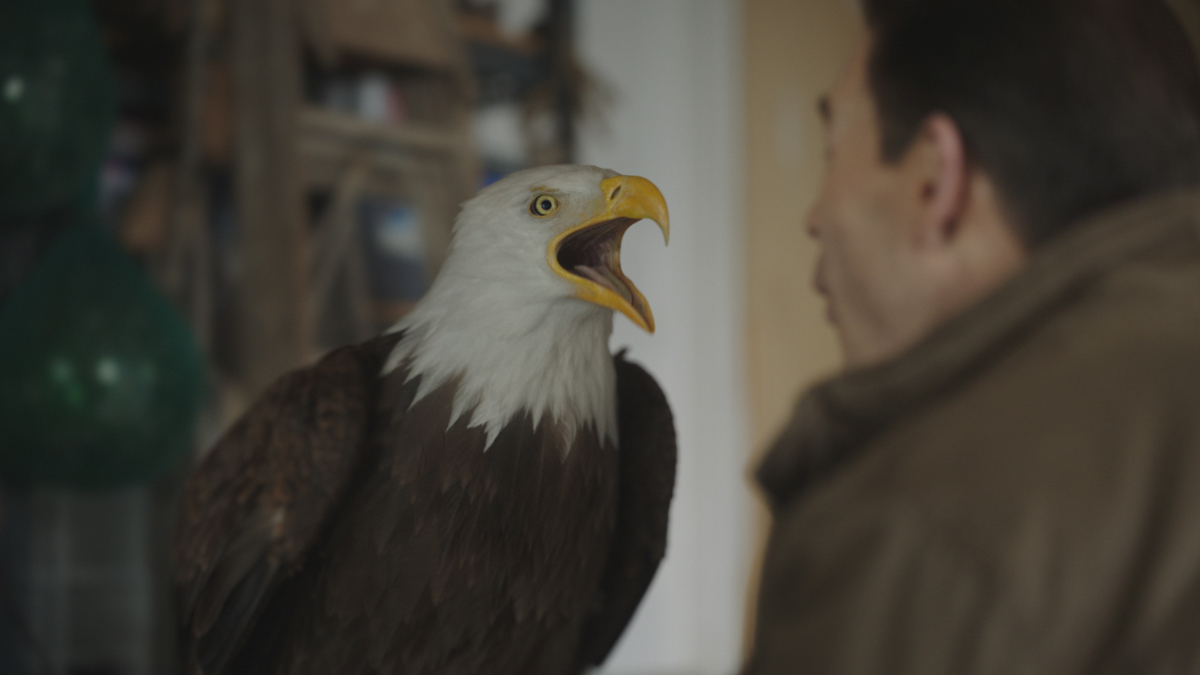 b&a: Did they have anything on set in terms of any kind of stuffy or bust or feathers to help?

Mark Gee: They did have a stuffy, which was really helpful. Our aim was to match the stuffy to start with. But in a lot of cases, the stuffy just didn’t look like a real eagle. However, it gave us some great reference as far as the lighting went. We’d be matching the stuffy and showing James, and he said, ‘No, no, no, it looks a little too much like the stuffy.’ A lot of lookdev went into it. 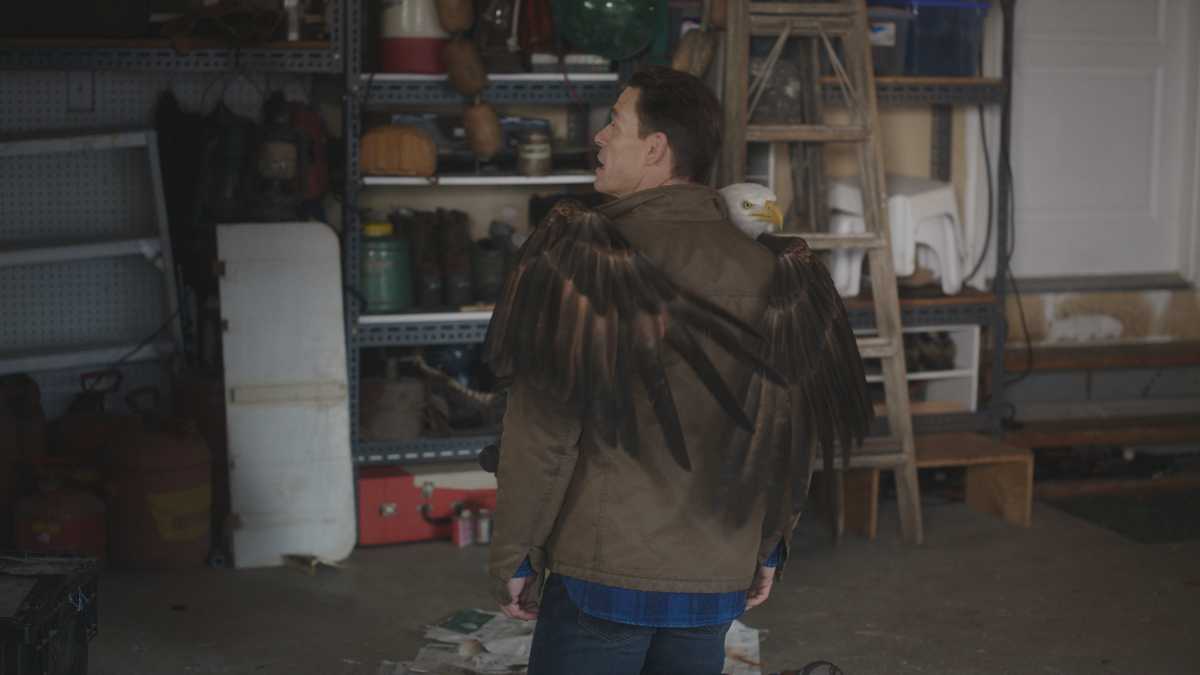 b&a: You had to keep it a real bird, obviously, but then he’s sort of a bit offhand sometimes. And then he’s just a normal bird other times. I wonder if you can talk about some of the very specific animation challenges and perhaps any feedback James would give about this.

Mark Gee: Mark Smith, who was our animation supervisor, he worked on Mulan previously, so he obviously had some experience with birds. He and his team did an amazing job. James’ brief was, ‘I want it to look like a real eagle. It’s just got to be eagle-like, but he still needs to show a bit of empathy, but he still needs to look like a real eagle.’

It was a really hard brief to hit. It all came down to what we call ROMs, where we were matching the reference in the walk. And we’d have this walk from this particular reference and James would look at me and just laugh and he’d say, ‘Oh, he looks like a real dude,’ but it was a real eagle walk! And this just started to give Eagly personality.

You could also tell by the animators, as they were animating him, they would give him his own persona. Even though he looked like a real eagle in his movements, it was just really subtle things that set him apart and gave those emotions that James was after.

a lot of work went into creating the (second) greatest character of all time pic.twitter.com/Gm246OjZiY

b&a: What were the actors acting against?

Mark Gee: The big challenge was John Cena never worked with a target. So, eyelines were always an issue, but we made it work. Again, animation did a really great job doing that. And in fact, James sort of warned the actors that Eagly was going to be the most popular characters. He was a comic relief and he showed empathy. He was a mad eagle and attacked people. So he did all sorts of things, including the famous dog in the car scene, when Eagly had his head out the window. That was a really fun scene. 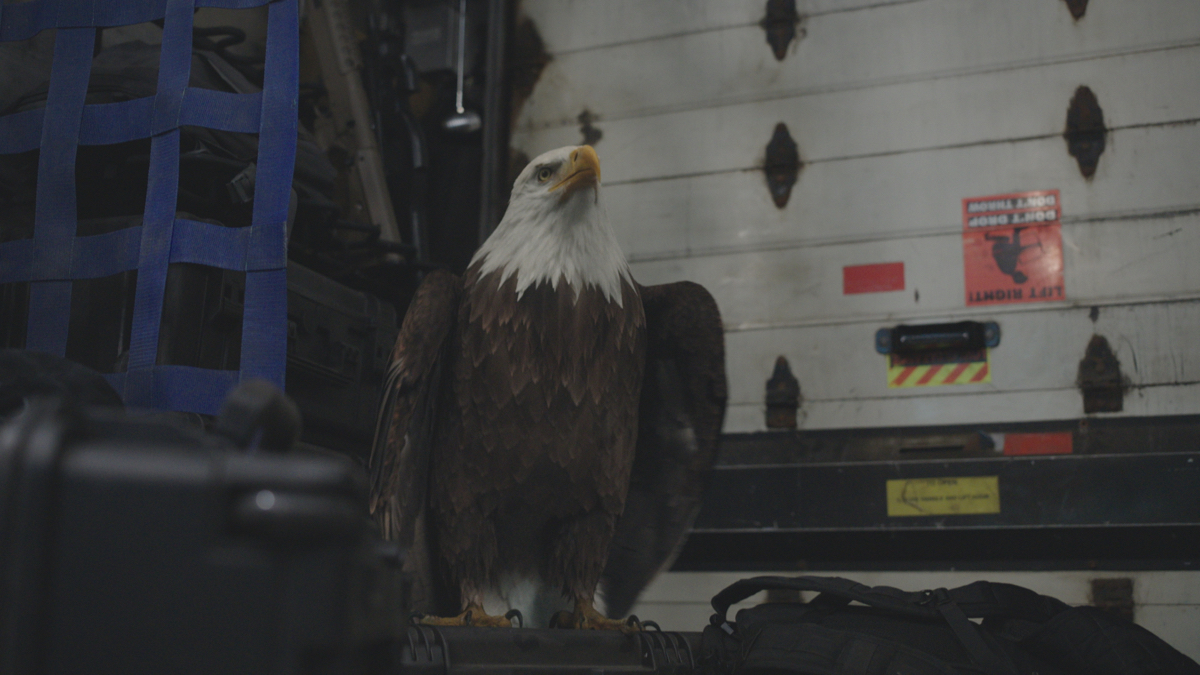 b&a: Just finally, Mark, what kind of conversations did you all tend to have about Eagly’s treats that he brings, the roadkill and the animals?

Mark Gee: Yeah, it was interesting. They did film some of these practically, but obviously there’s a handoff at some point. Sometimes we just ended up replacing them, like the squirrel, for example. That was where we got into sculpting. We sculpted those animals more so than we sculpted Eagly. Because when he is holding the squirrel in his beak, it’s rocking around in there. So we had to sculpt the fur and skin so that it was nice and tight in there. 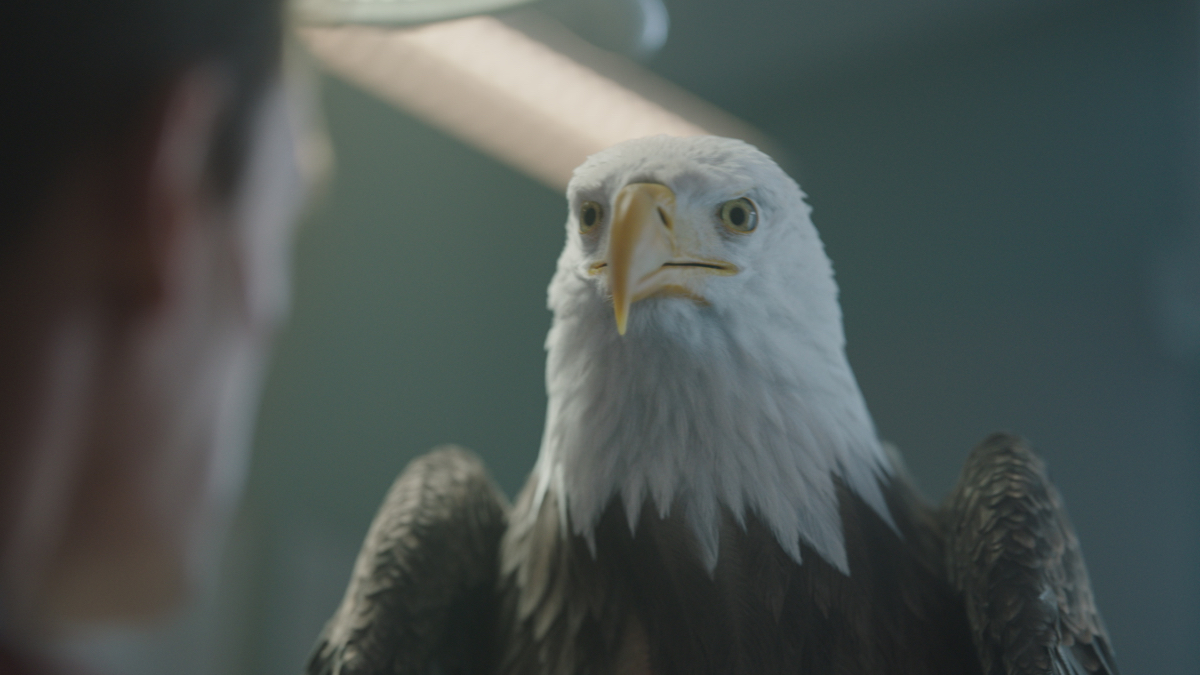