The studio behind the work, Studio C, breaks it down.

Among several challenges presented to design, graphics and VFX studio Studio C on Lana Wachowski’s The Matrix Resurrections were the cockpit displays and UIs for the Mnemosyne hovercraft.

Here, Sam Jones, Director and Motion Graphic Supervisor at Studio C, and Gordon Spurs, Creative Director at Studio C, break down the work, including how they matched and updated the ‘classic’ Matrix graphics look established in the earlier films, and what 2D and 3D tools were used.

b&a: Can you give me a brief history/overview of Studio C?

Sam Jones: Founded in 2018 as a high-end motion graphics studio, Studio C is the creative offering of Compuhire, the UK’s leading playback company. We offer bespoke graphic content for on-set and post-delivery, and vfx across film and TV productions, as either a fully integrated service (graphics and playback) or independently as projects require. Credits include Venom 2, Godzilla vs. Kong, The Suicide Squad, Fast & Furious 9, Black Widow, WandaVision, The Midnight Sky and more.

When the opportunity to pitch for Resurrections came to us, our work with Production Designers Peter Walpole and Hugh Bateup on previous Wachowski projects (Sense 8, Jupiter Ascending) and graphic credits meant that a lot of trust was already there. It became a fully integrated project, with Compuhire on playback and Studio C the graphic leads, crafting and delivering over 100 graphic UI and content assets across over 20 sets, plus a few additional in post.

b&a: For the imagery seen in the cockpit of the Mnemosyne, what was the overall direction Lana and Dan Glass had for the look and feel of these screen graphics and UI?

Sam Jones: In terms of overall direction, the Art Department and Director Lana (Wachowski) entrusted us to reimagine the visual language of the Matrix universe technology which is set 60 years into Neo’s future. The only element that was off limits was the classic dripping [waterfall] code which we were more than happy to work with. Within that, we had a lot of freedom to come up with a vision for how we felt the graphics best supported the story. We were given some references and had countless discussions with Production Designers (PD) Peter Walpole and Hugh Bateup about how the graphics needed to look and what story they needed to tell, in a way that made sense in the Matrix world.

We spoke with Dan Glass a few times in pre-production and the aim was for us to give him as little as possible to do in post. I think when the project is this big there is an expectation that you’ll be replacing a lot of the screens as the project evolves.

For the Mnemosyne ship, it was important to retain continuity with previous hovercrafts, in terms of what a screen’s function was, and we looked at all of the screen designs from the Neberkenezer and picked out key repeating elements so we could show this was an evolution rather than a redesign. In this film the humans have been working together with the Synthients which allows their technology to advance beyond what they were previously capable of and we reflected this advancement in the designs.

Gordon Spurs: When we arrived in Berlin where the Mnemosyne and the set were filmed, the PD’s had printed every frame with a screen graphic from the original trilogy and mounted them on the wall. We started concepting by thinking about how they might have evolved over the 60 years that have passed since Revolutions. Our work began on the Mnemosyne (literally the Greek goddess of memory), so the pressure to get it right was obvious from the outset. There were six screens in the cockpit plus a holographic scanning device.

The standout is getting the opportunity to build on the iconic imagery established by concept designers and storyboard artists Geof Darrow and Steve Skroce (Matrix trilogy). Elements central to the era of the first film, like texture backgrounds in an OS (circuit boards etc.), bulky gradients or classic Sci-Fi fonts synonymous with the Matrix, are both a treat to play around with but also present a challenge when updating the visuals for a new audience and not having them feel dated.

I think balancing these bold retro visuals from the first film and leaning on shape elements from the second two films, while bringing more refined 3D elements with an optical edge into the mix, we arrived at a place that’s quite abstract and unique with a lot of depth and texture.

b&a: What were the specific challenges and features of the Cockpit UI?

Sam Jones: There was quite a jump between the original cockpit and the sequels in design terms, so the main challenge was trying to find a balance between the two whilst keeping it authentically Matrix. For example, we referenced the original prints of the underground sewer systems from Reloaded, creating a refined digital version to serve as a navigational screen. Generally, our UI blends function with abstraction to allow maximum flexibility in terms of supporting performance and story beats. We also incorporated some distortion and noise patina around the edges of the UI to mirror wear and tear of the ship props, which gave the Mnemosyne’s various sets a worn look, like elements of the ship and technology had been repurposed or seen a lot of action. 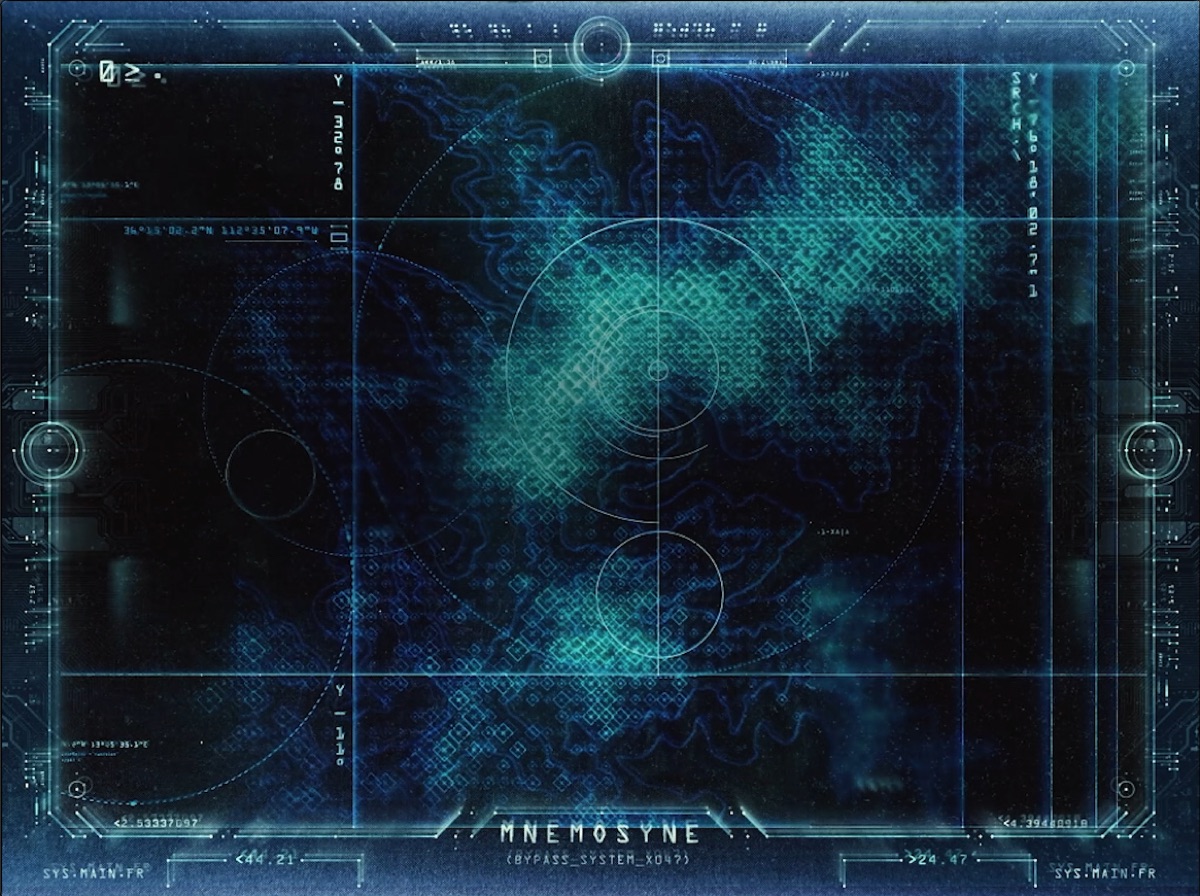 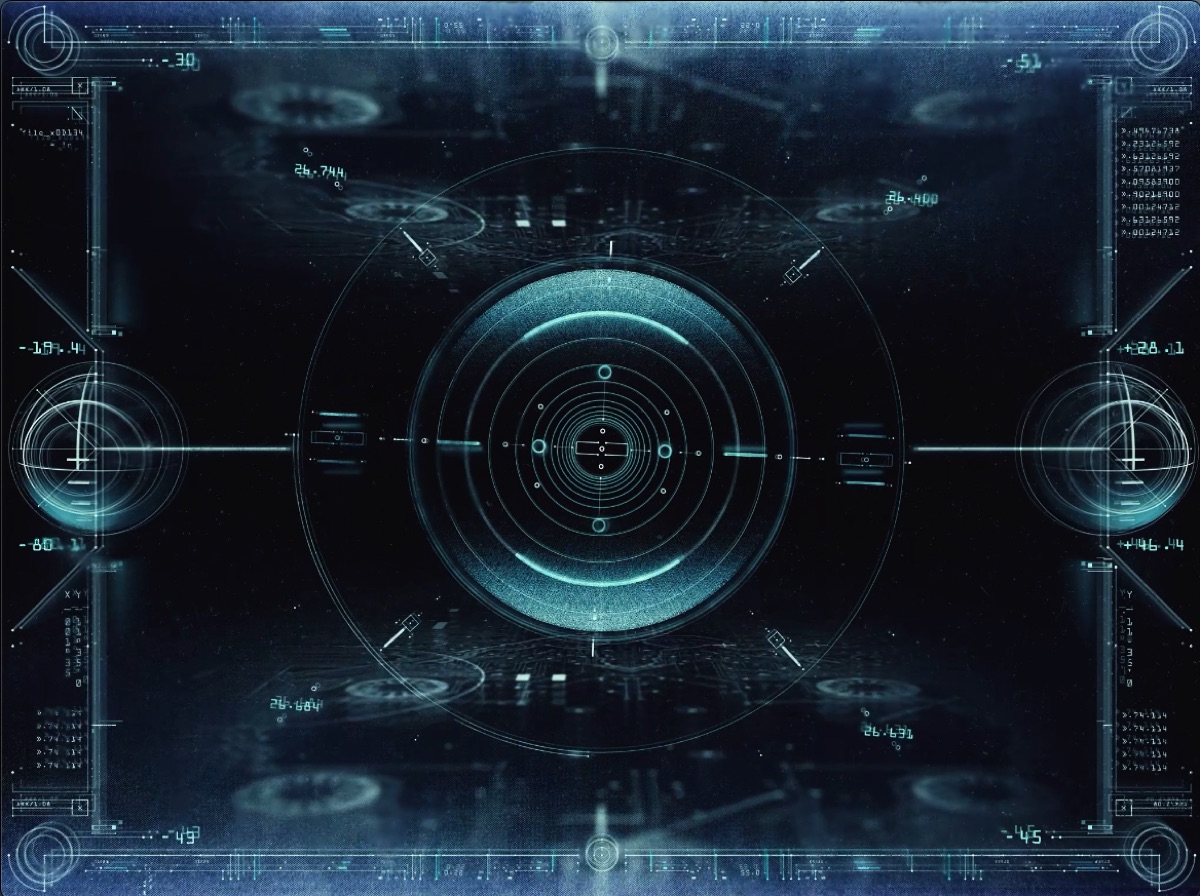 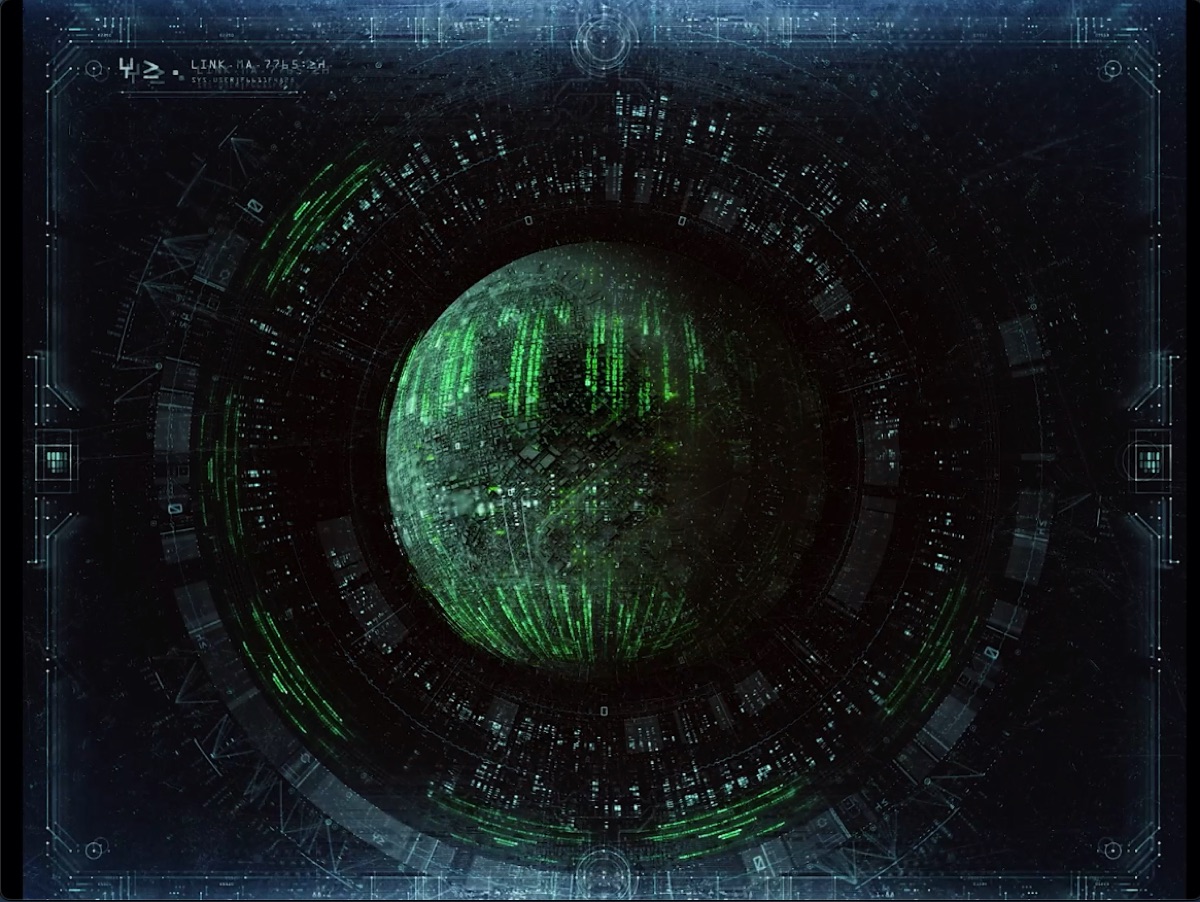 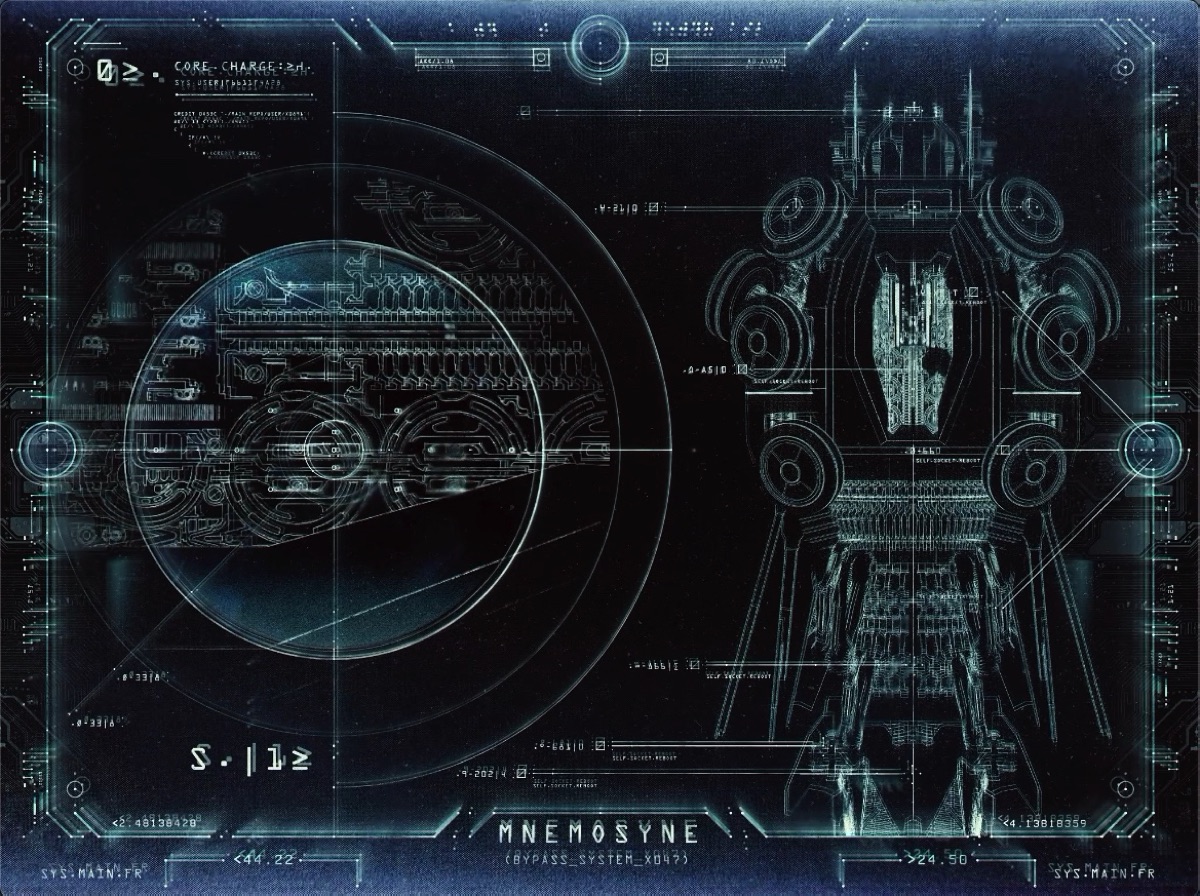 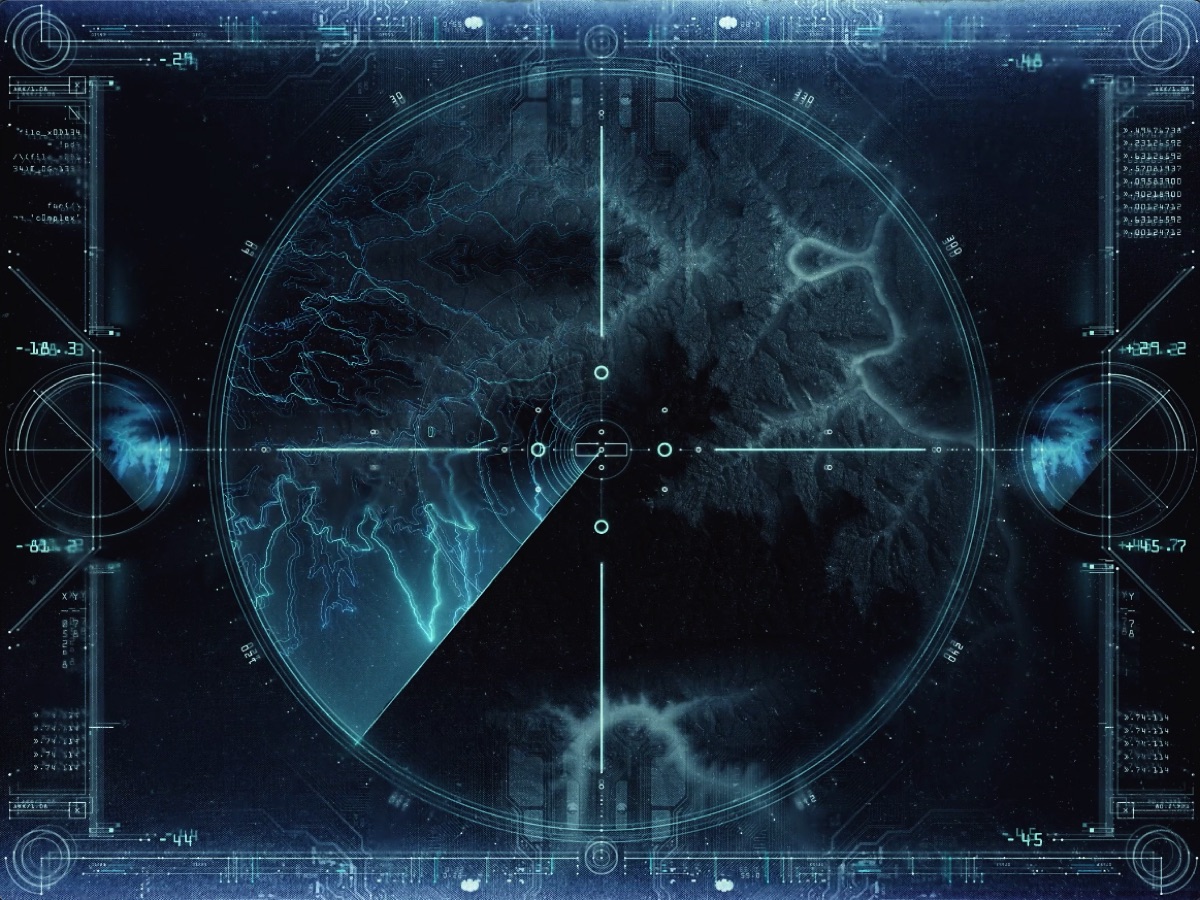 b&a: How did you approach the design and build for the centre hologram in particular?

Gordon Spurs: When we were over in Berlin we knew that in the original films the “donut” at the front of the cockpit projected a hologram of the sentinels and thought it would be nice to do, but this had never been discussed. We took loads of reference pictures anyway, then when Dan came to us in post he asked us to create some concepts to help liven up the cockpit that he could present to Lana, all based around the UI we had established throughout the Mnemosyne. We reviewed the few scenes where the hologram projector is used in the original trilogy to decipher the different aspects of function we could draw upon. We kept certain elements for continuity, like the ring around the bottom and the crosshairs, whilst expanding on the capabilities.

b&a: What were the different incarnations you considered and explored?

Sam Jones: The obvious place to start was with the Sentinels, pulling from a line in the script about the area crawling with them, which became our sentinel scanner warning system iteration which is the asset Lana first reviewed. After Lana had seen this version, it became more navigational, scanning through the tunnels and ruins as the hovercraft travels underground as well as taking an early VFX build of an old abandoned structure and implementing that within the dome as a more direct visual that the abstract lidar scan type build of the tunnel traversal design.

The difference is that the final asset doesn’t show the highly detailed 3D elements and it was comped in as a dome rather than a full sphere, so it doesn’t obscure the view out the window, but otherwise entirely as designed.

b&a: In terms of tools and techniques, how was it realized?

Gordon Spurs: Our hologram is essentially a spherical volume generated in Cinema 4D and Redshift wrapped in an onion skin of 2D graphics taken from the graphic language on the screen designs either side of the ‘donut’ emitter. This allowed us to build up a lot of depth and continuity across the cockpit.

Starting with the beautiful alembics supplied by Dan Glass and VFX we did some R&D on render passes and compositing styles between Redshift and After Effects. These included an animated Sentinel Alembic and some highly detailed environmental models relevant to the story. These were sent off to Lana for a steer on which content would best serve the story.

We built up additional layers of complexity with some X-Particles, Turbulence and Mograph tools within C4D. 2D textures were animated and wrapped around in layers, offset individually to give a gyroscopic logic to the functionality of the hologram.

One of the challenging aspects of working on holograms in a VFX pipeline is the size of the assets used by the vendors (most need heavy optimisation). Redshift was extremely helpful in this respect as the GPU rendering handles the poly-count of most of the models really efficiently. And furthermore, the options RS provides with the depth of the AOV architecture allows for a lot of creativity in compositing.

Once we had the look signed off we finished with Red Giant’s suite and comped in elements like the physical light rays emitting from a base of the donut, chromatic aberration etc. The finals were rendered to the shot ranges with handles and supplied as layered EXRs for final comp.

b&a: What were some of the challenges of readying on-set playback of material and matching to filmed action?

Sam Jones: As mentioned, our aim was to give Dan Glass as little as possible to do in post and we’re thrilled that on this project Lana loved our screens and I would say 90% of the work was in camera and made the final cut.

The six cockpit screens were delivered for onset playback which always comes with an immediate pressure as they are being committed to film. The final screens you see in the shots are as filmed – no changes were necessary during post, as the abstract style of the graphics allowed for flexibility in matching specific story beats.

However, there were other sequences that were more challenging, requiring a lot of discussion, both before onset playback and again when augmenting those assets in post. For example, the opening sequence when Thomas Anderson is seen interacting with his desktop screens, specifically the ‘Modal terminal’, was by far the most complex. The content and interaction required us to meticulously match story beats to action across the multiple screen set up, and we designed and built a Unity programme across multiple monitors that served as an interactive guide for Keanu Reeves’s performance on the day of the shoot.

We then came back in post and helped VFX Supervisor Dan Glass with 3D lookdev for the Modal environment, when Reeves/Anderson is seeing himself projected onto the streets by clicking through the digital version of the street with code raining down the walls of the street – and tightened up timings for the final edit with existing elements. They actually adjusted the edit to allow more time for our elements to tell the story.