Framestore goes behind the scenes of their cake city work in ‘A Boy Called Christmas’.

Gil Kenan’s A Boy Called Christmas includes a joyous scene of the mouse Miika, voiced by Stephen Merchant, discovering a ‘city’ of cakes, and bursting through them in complete happiness. The sequence was realized with visual effects by Framestore.

b&a: Can you talk a little about designing the actual cake city, in terms of concepts and the certain kinds of cake/biscuits/sweets that needed to be in there?

Glen Pratt: The film’s director, Gil Kenan, always seems to be storyboarding on his iPad. I actually remember him showing me this idea in the Framestore reception – he had the storyboard mapped out, and I loved it straight away. The clarity of his vision for the scene meant we could really hit the ground running, and despite its complexity it didn’t require a lot of iterative work. Production designer Gary Williamson, who we’d actually worked with on the Paddington films, came up with the concept art and the overall palette for this sequence. To my mind the structures and buildings are really resonant of the amazing Sámi craftsmanship we saw when he, Gil and I were on a recce in Finland.

b&a: What did you need to ‘match to’ with that cake city sequence, in terms of any cakes, or live-action camera move from the plate? Any particular challenges in the cake build process, say in terms of ‘building’ layout, or lookdev’ing and rendering that kind of cake look? There are times of course when Miika ‘breaks through’ sections of cakes — how was this achieved in terms of any FX sims?

Glen Pratt: This might surprise people, but the cake city was actually built – or baked, if you will – as an actual physical set. Expert cake-makers worked with Gary and the set designers to cook and construct it, and we shot it all at London’s Twickenham Studios, capturing the entire edifice with photogrammetry. This meant we were all up to our wrists in cake with icing melting all over the place, but it enabled us to captured the lighting exactly as Gil and DOP Zac Nicholson wanted it, and I think it really gives our VFX work a sense of crumby, crumbly tangibility. To me it’s not just a charming, funny sequence, but also a brilliant example of how VFX can assist a director with their storytelling: it’s not some huge action sequence, or an alien armada – it’s a small, funny mouse joyously stuffing his face with cake.

Stuart Penn: Once we had the lidar scan and photographic reference of the cake table back at Framestore, we began the meticulous task of rebuilding each piece of cake and dressing it in CG. Extra detail was paid to the areas that Miika interacted with, in particular the cake that he eats his way though. The FX team used reference of a broom handle being pushed through one of the practical cakes to see how the icing would react as Miika pushed his way though. A coating of cake crumbs was attached to Miika’s groom, which helped integrate Miika into the scene as he exited the cake. Marion Nove-Josserand, our look dev lead, also lit the shot based on DOP Zac Nicholson’s lighting of the practical cakes. Having one person in control of the lighting and look dev helped us to develop the look of the cake table with the minimum number of iterations.

b&a: For Miika, can you break down the steps that Framestore goes through for building, rigging, animating, dealing with fur etc for a character like this?

Dale Newton: For all the CG characters in A Boy Called Christmas, Gil Keenan gave us a solid brief in respect of their backgrounds and motivations, their purpose within the story and many points of appeal and charm he was hoping to hit. Miika for instance was to be a skinny little mouse, desperate for a bite to eat, along with everyone else in the kingdom. Fearful and mistrusting of humans (or anything strange and new) yet will become courageous when cheese is involved! We were careful to build a mouse that although designed and thus a little stylised – he has larger eyes and ears than a regular mouse – would be convincingly performed as if by a real mouse. We studied real mice – we found some harvest mice at a summer fair that were especially sweet. We shot hours of reference material observing the way they walk, breath, climb, sniff, snuffle and snuzzle and yawn before bedtime! All of which was analysed and rebuilt by our assets team into our Miika animation puppet. The animation team then used the same footage to immerse themselves into the headspace when coming up with performances. And I think some of my favourite Miika moments are those that have been carefully observed from life and adapted into a scene in the film.

Stuart Penn: In common with all the CG characters we develop these days, Miika’s rig contained an underlying muscle system and skeleton. The dynamics of the muscle system is very important in making Miika a believable mouse and ensuring his groom moves correctly. It also took into account volume preservation, taking Miika from a round ball of fur when curled up or crouched to a skinny mouse when fully stretched out. Our groom system made it easy to attach particles to his fur, whether it be snow or cake crumbs.

b&a: What approach in particular did you take to inputting any facial performance from the actor? How was the actor filmed? How did that translate to any mouse facial animation?

Glen Pratt: As Dale says, the key thing for Miika was to ground him in reality as a believable, relatable mouse. As such the focus was on his body language rather than weird, anthropomorphic mouth shapes that would drag him into the Uncanny Valley and throw audiences off.

We had access to Stephen Merchant’s witness cam footage throughout, and Stephen was also able to see the work as it progressed which I think really helped when it came to post. Rather than trying to capture or recreate Stephen’s facial performance, the animation team instead worked to distil the essence of his character – if you see the witness cam footage alongside the final shots it just makes perfect sense. Stephen’s voice gives a tremendous amount of shape to Miika’s character, and the anim team have enhanced and amplified this with careful, nuanced, naturalistic body language and quirks of character.

Dale Newton: We had the opportunity to record reference footage of Stephen Merchant at the audio recording sessions. We used a head mounted camera to capture his face shapes with two additional cameras capturing his general performance. As a general guide for the dynamics of lip sync – this reference is critical. And it has been well established over some years of doing similar creatures, there is a mapping of equivalent shapes between human actors and long muzzled CG performing creatures (Rocket Racoon / Paddington Bear are just two for instance). Depending on the creature, for instance our Miika, mouse anatomy does not allow for the sort of thing that goes on in a human brow – what are know as brow raisers or lowerers, and that corrugator crease (a deeply concerned look) finds very little natural equivalence in it’s rodent counterpart. That is without looking cartoony, and in VFX where a highly naturalistic treatment of a creature is required, this very often is a sign along the path leading to the dreaded Uncanny Valley.

With the avoidance of that cursed realm in mind, we would replace the emotive markers that might be ordinarily read on a human face, with ear movements or even subtle full body movements that can channel similar ideas. Without realising it many of us are very familiar with canine ear movements. Alert, friendly ears face up and forwards while shy or insecure ears face away flat along the head. One ear down and one ear up reads as “curious”, while both ears orienting in a single direction moments before a head turn is a fantastic way to mark a change of direction of attention, much the way an eye dart would for a human on screen. And so it’s with this generally larger pool of emotive techniques that we’ve built up over many years of creating characterful performances with various creatures that allows us to be able to interpret performances such as Stephen Merchant’s for A Boy Called Christmas. 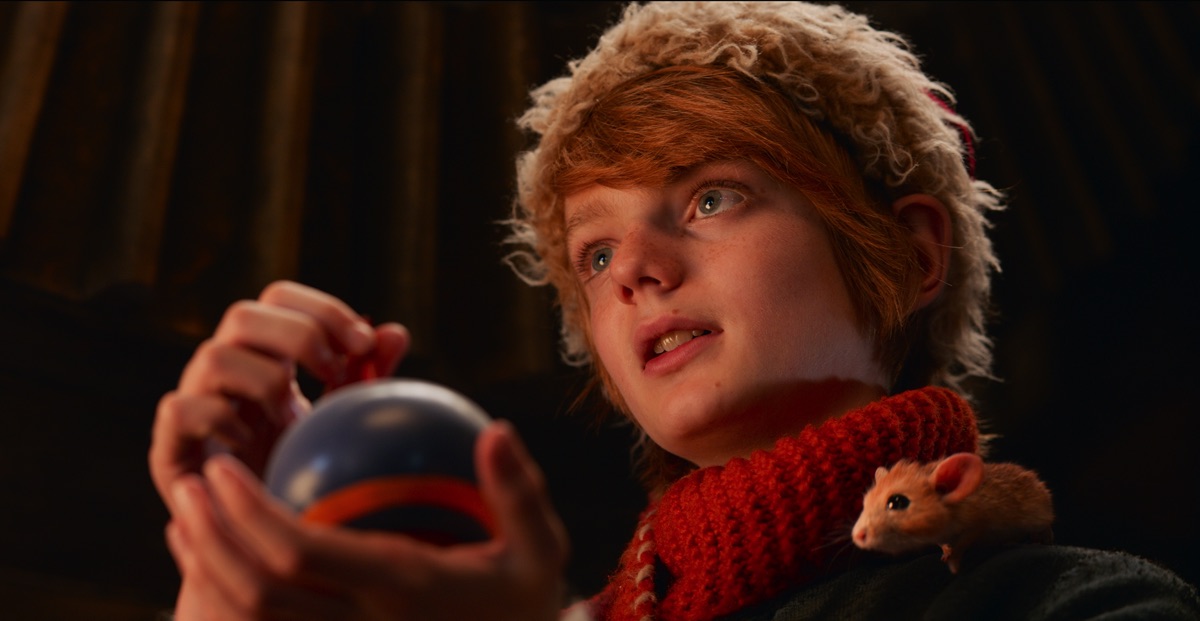