FuseFX’s Josephine Noh tells befores & afters about their work on the show.

In the Netflix series, Colin in Black and White, former NFL player Colin Kaepernick, along with director Ava DuVernay, tells the sportsman’s life story via a combination of narrative flashbacks to his childhood and presentations in a ‘gallery’ setting. Here, moments from his life are revisited through projections cast behind him showcasing key imagery.

Behind the VFX for the series was FuseFX, which had to craft a number of environmental augmentations and also composite projections made by Elastic onto the gallery walls. FuseFX digital effects supervisor Josephine Noh explains how they made it possible.

b&a: What kind of visual effects did this show involve for FuseFX?

Josephine Noh: I think COVID definitely played a role in the kind of VFX that we worked on, because Colin Kaepernick was shot in New York while the rest of the cast was shot in LA. In the series he talks about his younger life and growing up, being raised and adopted by white parents, and the story needed to go back and forth in time. And so, we had to really try to bring a way to have the worlds together.

Colin was filmed in what we called the ‘gallery’ in New York. It was this environment for him to have a window portal to look into his life and also to look at these inserts that were made by Elastic. That was the vendor which did all this great montage artworks and collages of the messages that Ava and Colin wanted to portray in the show.

We integrated the inserts from Elastic to be like screens in the gallery and then helped to create interactivity of those inserts to Colin’s world. We also did transitions going through the window sometimes, to help him get from New York to LA.

b&a: For that gallery setting, did it have the benefit of being also a bluescreen or greenscreen setup?

Josephine Noh: There was definitely bluescreen, for particularly the ceiling of the gallery. They didn’t know exactly what the look would be right away. So they were thinking that was something that they could just figure out organically. For the windows themselves, they did do greenscreen and bluescreen at times.

b&a: And had Elastic worked out any of that imagery during the shoot, or was that all done post for you to composite?

Josephine Noh: I believe there were definitely ideas and storyboards already done on. The narrative was very driven by the inserts. They knew already what the inserts were going to be, but just looks-wise and timing was still needing to be worked out when they shot it. 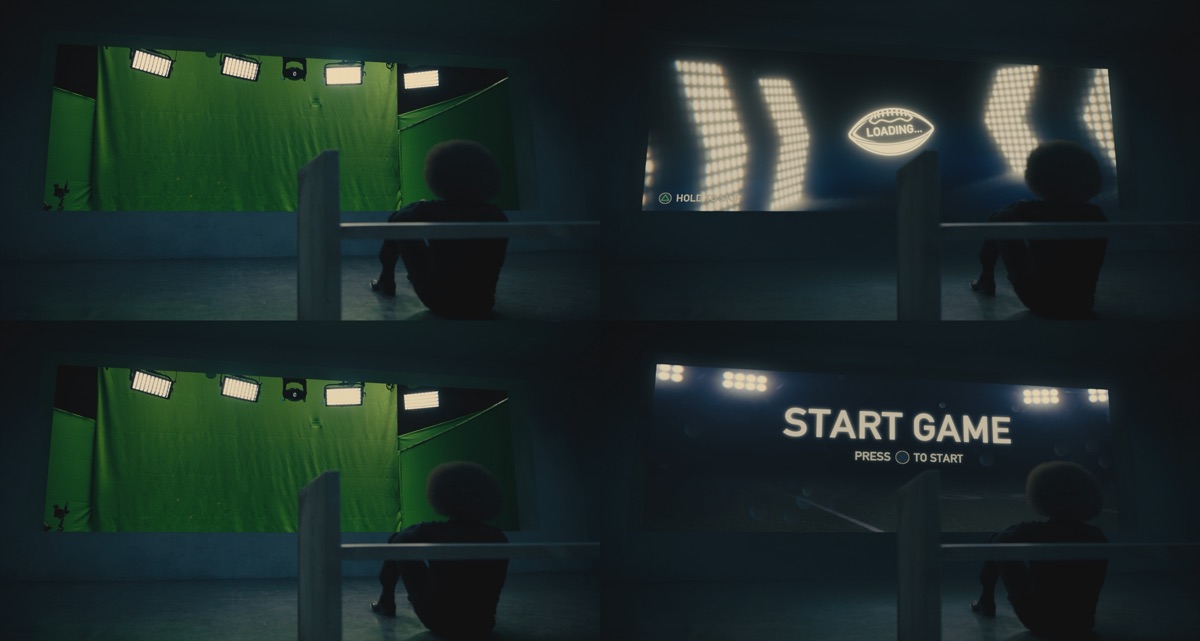 b&a: I couldn’t help observe that Colin has that characteristic hair and that you were probably having to manage a lot of fine detail there for the comps. What kind of challenge was that?

Josephine Noh: His hair was definitely a challenge to key for sure. We had to do quite a bit of patching at times, just to help rebuild his hair, because the lighting was generally kind of dark in the gallery. So later when we’re trying to integrate bright screens, it’s quite a different kind of lighting that can happen. His fro is actually not the thickest. It’s actually quite lightweight. So the hair team had to fluff his hair up throughout the shoot because sometimes it would start to slowly sink and change, it was kind of like cotton candy in a way. Then sometimes his hair was not in the same shape as before. I don’t think it really slowed us down too much by any means in that sense, but it was still just the little hair details, just trying to help not lose the hair was very much the challenge.

b&a: Was there a particular sequence in the gallery in terms of integrating the screens or integrating Colin that was a particularly challenging moment compared to others? There’s one where the football players emerge out of the window.

Josephine Noh: So you actually bring up one of the hardest shots in the show. Because it was still shot during COVID, they were looking to keep everybody separate. So the athletes were from one take, and Colin, another take. The whole transition of the effect of the athletes to slaves was tricky, just in terms of timing. We actually had to extract out the athlete takes, and we re-timed them just to match with the camera movement that was happening with Colin. It was driven by Colin, his camera movement. And so, we were just trying to get that matching all together and lined up at the end. We had to then rebuild some of the slaves themselves because the timing was not always lining up.

b&a: When we get to more of the narrative parts of the series, his childhood, say, were there particular environmental or modernization or de-modernization effects that Fuse had to do?

Josephine Noh: Yes, it was very much ’90s driven. So we just made sure that some of the logos and the monitors looked more of that period, like the big CRT monitors, just making sure those inserts looked period appropriate, say with some interlacing. Or there’d need to be the appropriate time period of NFL footage and placing that in, making it look right. Oh, and there’s some Bob Ross inserts thrown in there too, so that was fun.

b&a: Were you required to do any crowds in stadiums or anything like that?

Josephine Noh: We did some crowd work. We created 2D sprites of crowds and then just had them scattered around. There was one particular nighttime scene, when it’s him and the high school football team playing. And then on the sidelines, there’s all these 2D people. We created silhouettes with lots of atmos smoke to help make it feel more epic.

b&a: Are there any other shots or sequences you wanted to mention?

Josephine Noh: One of the other ones that was one of our most challenging shots is in the first episode when there’s young Colin in the Urban Wear store, where he’s very excited to see all the clothing that he just was never exposed to before. And then he turns, and then the camera turns to the present day Colin, who’s in the gallery.

So that shot itself, it took three months for us to figure that one out. Because the thing is, the camera angles were completely different when shooting young Colin in LA versus present day Colin in New York. We had to pretty much rebuild the clothing store and project it all on cards. And then we took out the practical gallery wall and replaced it with a CG gallery wall. And later they wanted to use a different take of Colin. So we had to redo that part too, so that was fun.

b&a: Were there any other transition shots like that throughout the series?

Josephine Noh: That was definitely the most challenging. The other one was in episode 2 when he is talking about minimum wage. For that one, there was this guy standing as a bellboy and then it transitions to the two women at the bank trying to get their loan approved. There was a bellboy actually walking in front of Colin, and we had to remove the bellboy and rebuild Colin. And again we made the walls in CG, to help with the timing. 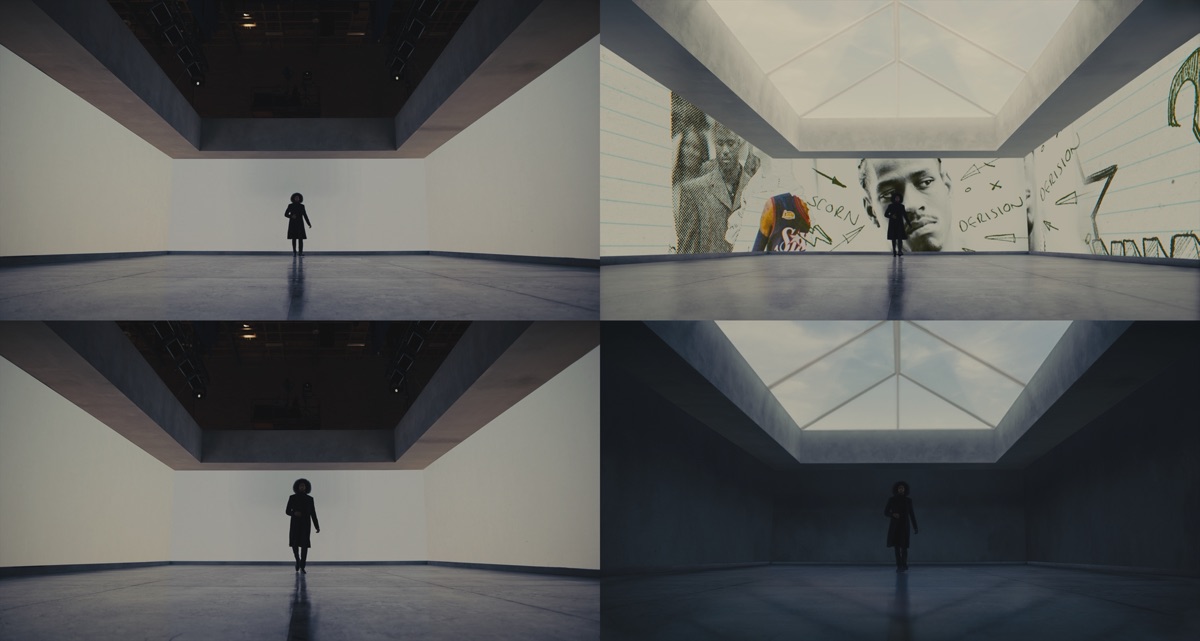 b&a: I love that invisible side to it.

Josephine Noh: Yeah, for sure. I think for us, what I was really proud of was, well, there was quite a lot of relighting we had to do of the gallery itself. Because again, they didn’t know the concept right away during the shoot of what time of day it would be. Even if the ceiling would be opened or closed. And so, when they decided to keep it more open, so then we had to let light come in, which they didn’t have originally. We then had to re-create or relight the space to look like it was lit from above. It took a lot of matting, making sure each area looked like it was interacting with the lighting. The point is for us not to take away from the story and not to be distracting. It’s just to enhance.