One of the most rousing sequences in Jason Reitman’s Ghostbusters: Afterlife sees the kids of the movie stumble upon the ghost dubbed ‘Muncher’ while they are driving around in the Ecto-1. What follows is a chase through the town, complete with proton pack blasts that harken back to the original 1984 film.

Production visual effects supervisor Alessandro Ongaro oversaw the VFX work by DNEG for that chase sequence, which ultimately combined real driving stunts, stage work and digital effects. He talks to befores & afters about crafting new looks for the ghost and proton packs, while also recognizing and paying homage to the effects work from the 1980s Ghostbusters films.

b&a: What kind of planning or previs was done for this sequence?

Alessandro Ongaro: This movie had no previs whatsoever. What we had were some storyboards. Jason also did what he called photoboards. While scouting and prep’ing, he was going onto location, taking his camera and shooting some still photography for key frames. For the car chase, though, this wasn’t so easy. So we went on with mostly storyboards.

b&a: What was, then, the methodology for shooting a moving car here? Was it a mix of on location and stage work?

Alessandro Ongaro: For the moving car, second unit did most of the exterior shoot, driving through the town and the big stunt performances. VFX supervisor Aharon Bourland from DNEG was with them supervising that.

Meanwhile, we put an array system mounted on a car. We ran this array down the street where we shot the second unit. So we had the plate to then do bluescreen compositing for stage work. Anytime you see Phoebe (Mckenna Grace) and the kids in the car or Phoebe on the chair, most of the time it’s stage work. We had a few face replacements here, too.

b&a: Was that a motion base used on the stage?

Alessandro Ongaro: We call it ‘oil grease’. It was very low-tech. We’d mostly have people bounce the car up and down. We had some small LED panels on the top that gave a little bit of interactive lighting.

And then the special effects team built this thing that we used for one shot, which allowed the actor on stage to slide left and right for the skidding moment. That was pretty cool because there was Mckenna Grace on the jumper seat on stage and with the car, she was having fun. For her, it was like going to the amusement park on a rollercoaster. 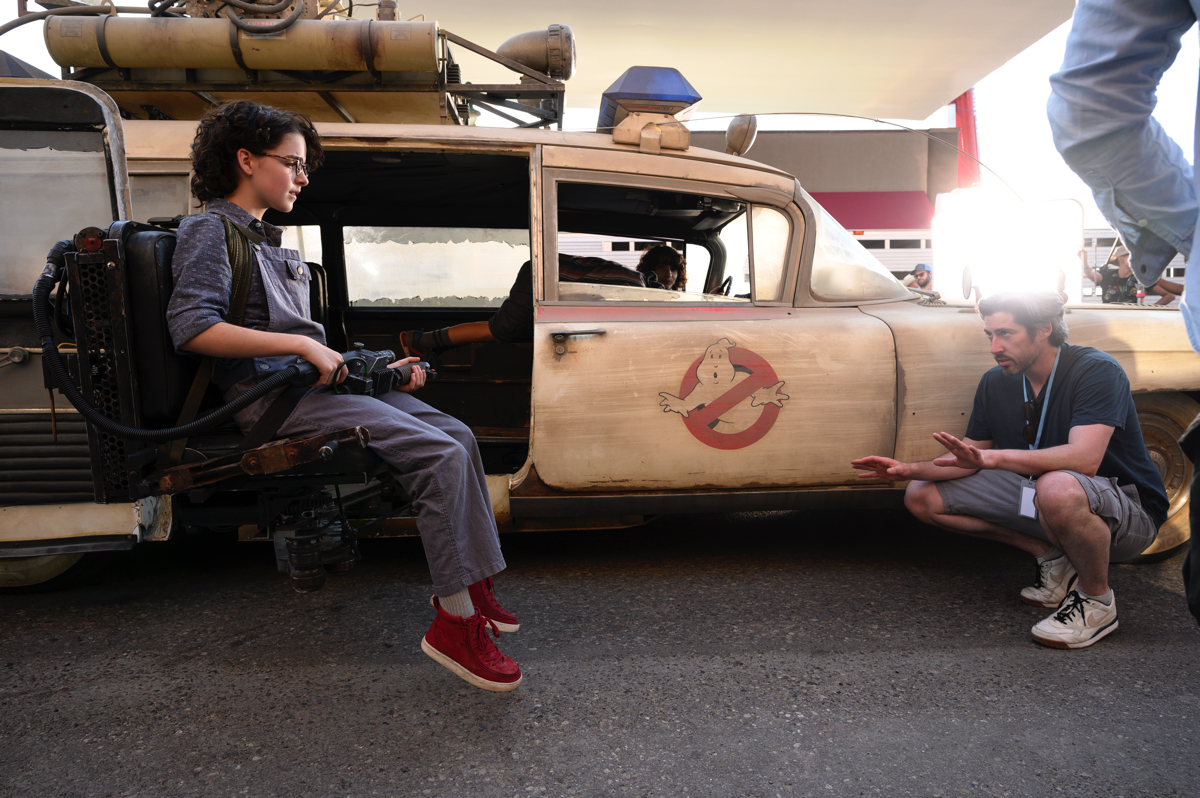 b&a: Did the Ecto-1 need to have any CG takeovers done?

Alessandro Ongaro: We only did one full CG takeover, which was the jump scene in the field. But during the car chase, it was mostly practical. What we did do in CG sometimes was the RC ghost trap. Some of that was practical and some was CG.

b&a: In terms of Muncher, did you have anything as a stand-in or stuffy on set?

Alessandro Ongaro: Yes, we had a cut-out. It was a big board of the size that we had in mind with a silhouette just for overall framing. For instance, at the beginning, when we are in town and he’s chewing on the fire hydrant, we put the cut-out there, we framed it properly, and then we shot it that way. We also had a skin reference that we used for lighting, but that didn’t really get used because the look of Muncher changed during post.

b&a: What were the conversations and developments you had about ghost look and transparency for Muncher?

Alessandro Ongaro: Well, it could have gone two ways. You can go for the glowy, super transparent and very fancy look, or the other way–which is what we did–where we literally studied how Slimer was done optically in the ’84 film, to try to give Muncher somehow the same feeling. If you notice, there’s not much glow around Muncher. We kept it very minimal and we kept some of the skin details, but not too much. Then we just did some trial and error to see how transparent we could go.

We were lucky to get the original negative from the ’84 movie. We actually scanned it as well. We could see the work dailies and everything. We used a lot of them for many things, not just for Muncher.

b&a: What did you notice about the optical compositing for Slimer back then in terms of, say, any artefacts that you wanted to impose here for Muncher?

Alessandro Ongaro: Being optically composited, it means that if it’s transparent, it’s transparent. We started that way, but it felt wrong. Even the proton beams. We started matching the ’84 film and we were all excited. And then we started looking at the shot and we’d say, ‘No, this is a little bit too much 84.’ The whole movie is a love letter to ’84, but we need to give it that 2021 twist. That’s what I always say, “84 with a twist.”

b&a: And I guess it was the same approach with the proton beam effects, then?

Alessandro Ongaro: The proton beam is an interesting one. We started doing some camera testing. We had Mckenna with the proton pack doing some interactive lighting to figure out how to do it. We took that and we started mocking up the proton beam very, very close to the ’84 film, which has the big, stronger core beam and the other one overlapping.

We had a lot of conversations about the colors, because once again, depending which version you look at, if you watch the DVD, they have a certain color, if you watch the streaming version, it has a different color, then you get the negative and it’s completely different!

And then the first trailer came out and it showed very little, but we did have the proton beam in there. And afterwards we thought, ‘That could be a little more interesting.’ So we took it to the next step, still based on the original, but instead of being just a core render, we went fancy with it. There are actually now millions of particles that give that final look. On top of that, we added extra noise to it. We maintained some of the spirit of the original one, but again, we needed to give it that extra treatment.