Behind the scenes with TRIXTER on their work for the character (and on the stand-in performer on stilts!).

Here at befores & afters, we’ve already been able to cover the great work by TRIXTER on Morris in Shang-Chi. Now we also take a look at their visual effects for the Abomination vs Wong fight scene in the film.

Incredibly, the studio was able to reference the original 2008 model from the film where Abomination is played by Tim Roth and draw upon that for this new appearance. VFX supervisor Dominik Zimmerle breaks it down.

b&a: Where did you start with Abomination?

Dominik Zimmerle: We received all the material that has been produced in the past. We received the model of the original Abomination from 2008. That was really cool to have this. That’s amazing that they still have this stored. We only used it as a reference. It was one of several references.

Then we received all the latest Hulk models so that we see how they’ve change the height, how the proportions are now that we could use as reference. We also got some internal concepts from Marvel again, which were super helpful at the beginning.

We then looked at his horn structure, where the plates are protruding outwards from the skin, how the fins looked, how the skin structure looked. Then there was a test where we tried to see how much of Tim Roth we needed to get in there.

From a technical point of view, we invested quite a lot in the skin sliding setup in Houdini. One of the technical issues or demands for us was that he has not only the protruding bone plates, but there are also sub-dermal bone plates where the skin is sliding over these and encapsulating these. This was something that was a joint effort between shader development and Houdini simulation to create a convincing representation of that. 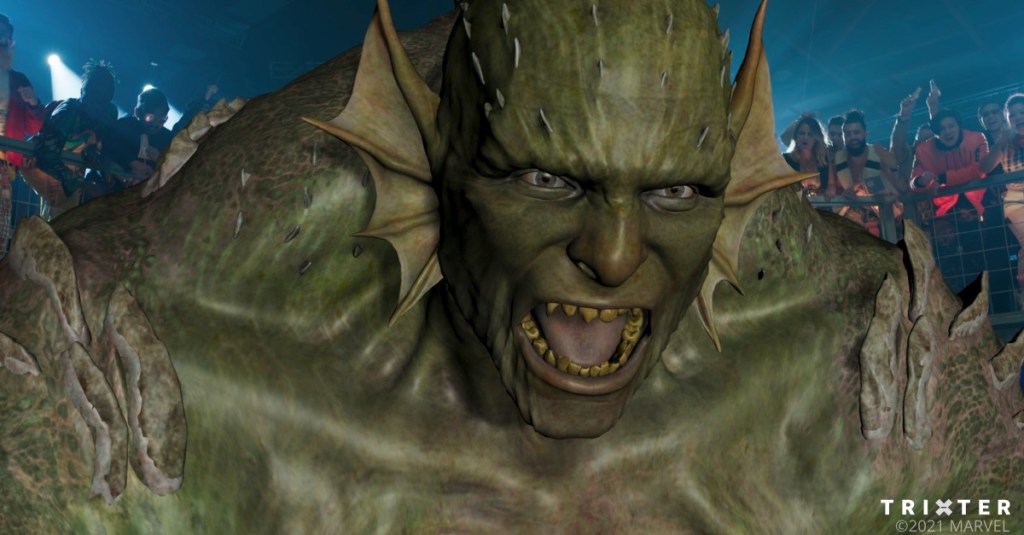 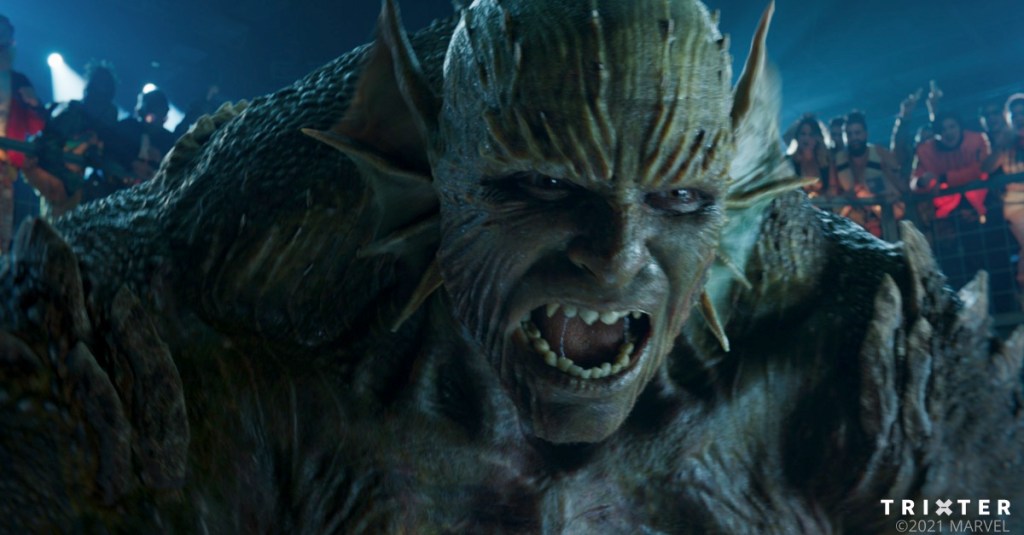 b&a: When they came to shoot the sequence, how did they stage that? Was there any kind of motion capture as well?

Dominik Zimmerle: That was actually quite fun because they had a guy on stilts. It was a green guy on stilts who had extended stilt arms so that he basically could swoop very far or do very far punches. This was done as reference for Benedict Wong for where to duck away and so on, and he was attached to the wires for safety.

Of course for the performance, it was not exactly what we needed because it wasn’t violent enough, simply because of the physical limitations. The performance of Abomination was key framed by our animators, who shot all kinds of internal references trying to transport the violent action of this fight.

b&a: There’s some fun moments in there, of course, with the portals. Tell me about the challenge there, both from an FX point of view, but also just layout and staging of that punch that happens.

Dominik Zimmerle: We also received the original setups from Doctor Strange and from the Avengers movies so that we could repurpose those. The challenge was here to do the slow down effect with the portal and still maintaining the feeling that this portal is working. The portal look is very much relying on the motion of the sparks, and basically to underline the slow down effect, we took this motion blur out and had it then basically go into sparks for the slow down effect when accelerating up again.

We also had to work out, how much do they need to be rotated to the audience to understand this is a portal and not some kind of glowing line, and how we can stage this to read the portal and to see the arm coming out? 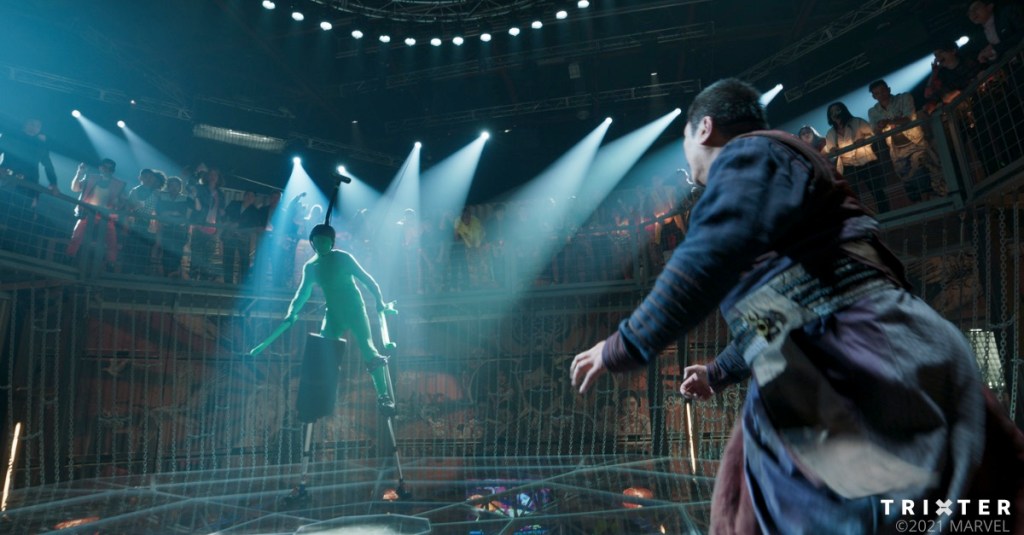 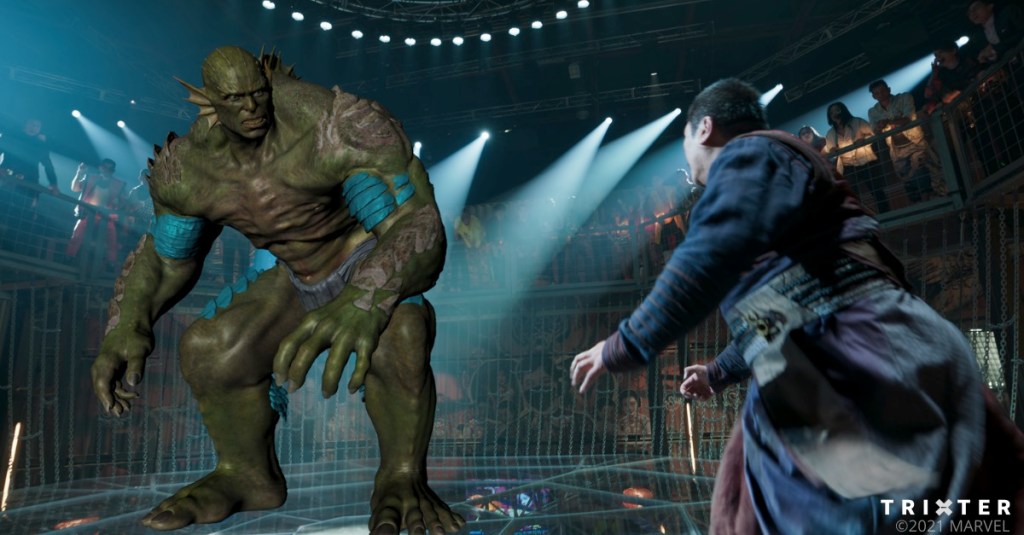 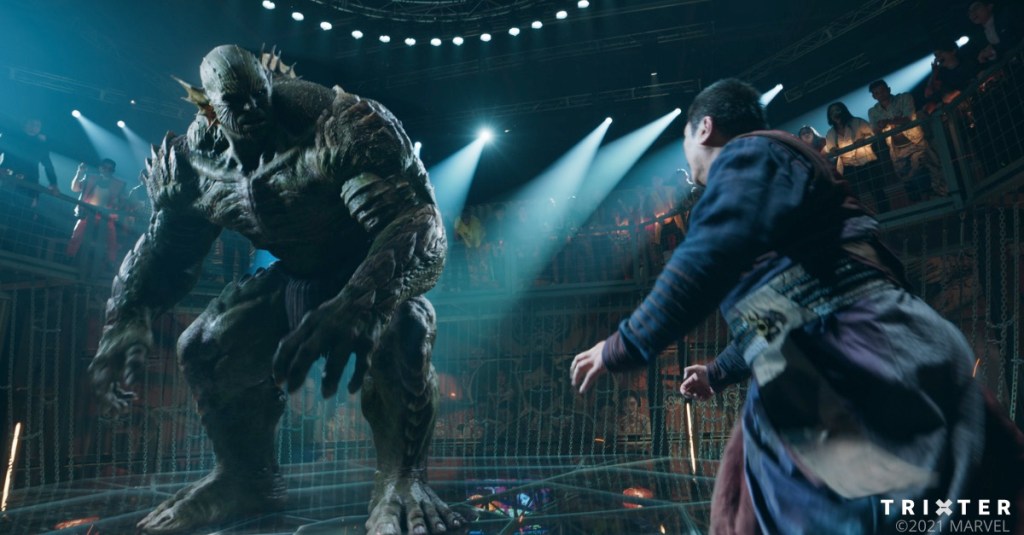 b&a: Not only is that quite a complicated CG character, there are spotlights and atmosphere and the FX from the portals—what was tough about adding in all these elements to the fight?

Dominik Zimmerle: We worked a lot on the atmosphere. Chris Townsend, the overall VFX supervisor, was very eager to get this atmosphere back in and also use the atmosphere from the ring. We see, for example, when the spotlights come through with the haze in the air, and all these God rays coming through. He really wanted to use these God rays to show the mass and shape of Abomination, to help show the drama of the scene and use the drama of the scene to show how big and how vast Abomination is.