At one point in Shang-Chi and the Legend of the Ten Rings, the main characters happen across Trevor Slattery (Ben Kingsley), of Iron Man 3 fame, and his Hundun companion Morris.

The six-legged, faceless Morris was a CG creation crafted by TRIXTER, which had to overcome a number of challenges—not least of which was the missing face, but also included feathers and fur—to bring the Hundun to life. TRIXTER visual effects supervisor Dominik Zimmerle explains how the VFX studio did for befores & afters.

b&a: Morris is really interesting because TRIXTER does such great character work, and here’s a character with no face and these wings—it’s just such an unusual character. I’m guessing it was a fun one to do, but where did you start?

Dominik Zimmerle: This creature is based on Chinese mythology as far as I understand. It’s a creature called a Hundun, a primordial God of Chaos. So it is actually depicted in some illustrations as we see it in the movie, but there’s also completely different illustrations where he’s much more menacing. Marvel started off conceptualizing a few Morris alternatives and this is what we used as a starting point.

b&a: What were you doing in terms of any kind of early motion tests?

Dominik Zimmerle: We needed to go back a little bit to the anatomy. When we received the first concept art from Marvel, it was somewhat undefined how these legs were configured. Do we have two pairs of back legs or two pairs of front legs? The next thing we needed to decide was if this was a digitigrade creature, walking on its toes, like a dog or a cat, or if this was a plantigrade creature, which is basically like a wombat or a bear, walking on the flat heel on back legs.

Marvel, after some tests, some early sculpts and some design proposals, went for a plantigrade creature, because they are generally a little bit more droll and fun to look at. They are not as swift and elegant as a cat, for example, but they are fun to look at. Once we had all of this defined, we started early motion tests. We looked at references of bears and wombats–from all these kinds of creatures–but also puppies, to work out why we see them as cute.

It was very demanding to do this because Morris is a very condensed creature. He is not very long, but he has six legs, so you need to find room for all of this. What do you do with this middle pair of legs when basically there’s no place to go? The same for the wings because you have two pairs of them. Our animation team had to work all this out.

b&a: What did they do for Morris on set? I’ve seen a fun photo of the actor holding a stuffy.

Dominik Zimmerle: Well, we started very early on with the development of Morris and we were one of the first vendors. When [production visual effects supervisor] Chris Townsend asked us what we need for the stuffy, we were already quite far into the design of Morris, including with the right proportions. Which means that we could provide them with a 3D model of a stripped down version of Morris. We thought that it was best if we take the main proportions of Morris and shrink them down a tiny bit to compensate for the fur, so when the hand touches inside the fur then that will work better for fur interaction. We also left some kind of stumps for the attachment point of the wings and stumps for the legs.

The stuffy was a reference point for the actors and an accurate volume. It was also a little bit rubbery so that it could be compressed further, which is very important for a natural interaction of the asset, I think. 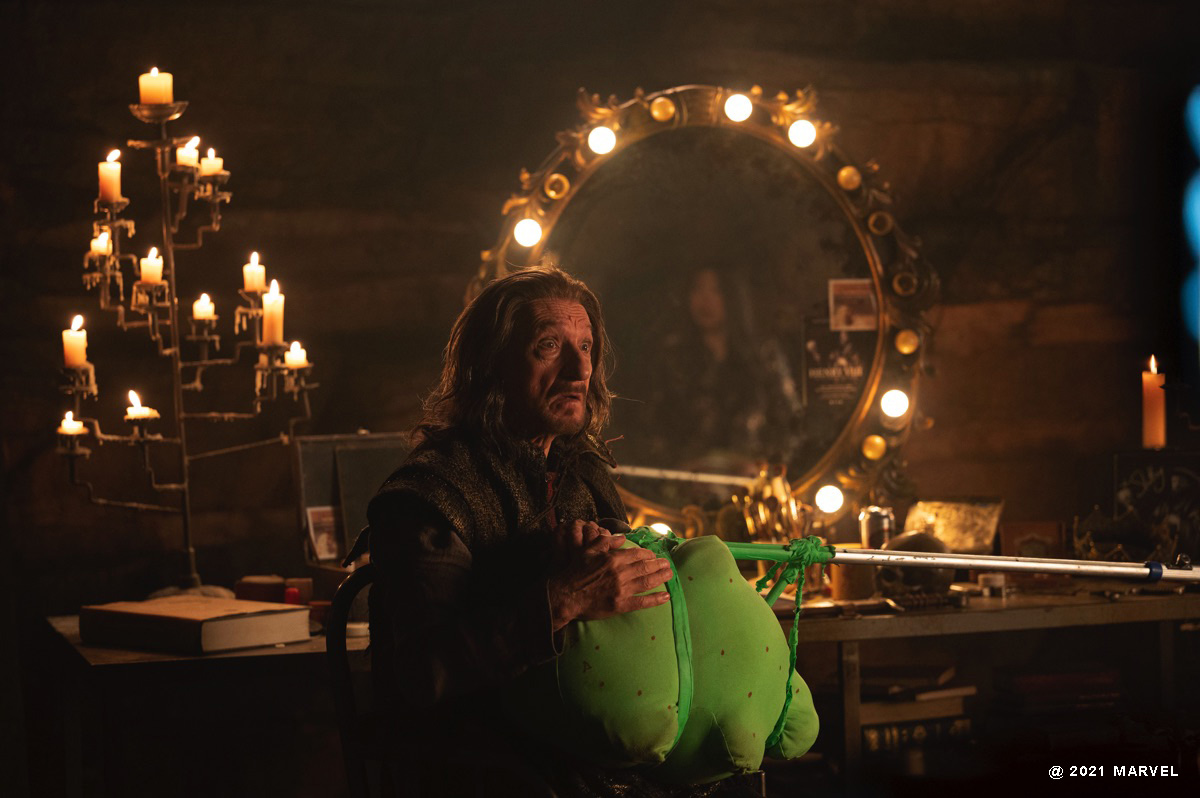 b&a: What kind of match-moving and roto and clean-up was necessary with the stuffy?

Dominik Zimmerle: That was actually very complex. In almost all of the shots, we didn’t use any CG human limbs, whereas we might usually do that. I think there were one or two shots where we had the chance to use a CG limb, but usually we would rely entirely on the performance of the actors.

It starts with an initial camera track. Then we have an asset which is representing Trevor, who is mostly interacting with Morris. We then asked our body tracking department to align Trevor as well as possible based on witness cameras and the original camera. Animation did blocking animation for that. Then, in case it was required, we adjusted this.

We also went through a final sculpting process to really get everything as closely as aligned as possible to have accurate shadow interaction and accurate fur interaction. Then animation would refine the final Morris animation. We also did some final editing on Morris himself to really have him rest in the arms of Trevor. The simulations play an important aspect, too, in terms of how the outer fat mass is resting on the arms. The final step is compositing. It really involved several departments to iteratively refine this.

b&a: You’ve got fur and feathers here, which are usually big, big challenges. What were some of the FX and sims and rendering challenges for Morris?

Dominik Zimmerle: For the fur itself, we’ve had a lot of experience with past creatures. Here, when we had interaction and we needed to have a lot of fine detail on top of fingers, say, we’d need to see individual hair strands coming out. This was, simulation-wise, very demanding because it needs to be very accurate and we needed to have a very high resolution of the simulation.

For the iridescent feathers, we captured a lot of reference. We also did some shooting with a cross-polarized light to get information of how the highlights would behave and how transparent the feathers were. We took anatomical reference from Canadian goose, which was the reference for the base layer of Morris. Then we created a shader specifically for the iridescence that we also could control, depending on the view. With the feathers, it was especially important to avoid any intersection. We used a feather tool within Houdini.

b&a: Sometimes I just really forget that Morris doesn’t have a face. That’s usually how you add personality, but what did you need to do instead of that here?

Dominik Zimmerle: This was a part of the development process. In the beginning, for example, we used the front wings a little to try to get emotions, but this very quickly looks cartoony because you’re just always just making them go down for sad and up for happy. We felt it should be more subtle, plus it was very important for the director and for Chris that people understand that Morris is actually ‘talking’ to Trevor or is paying attention to him.

So, what we worked on was leaning into the direction–‘Can he please look at Trevor while he’s talking?’ And then there was this idea of making it very clear that Morris was talking by having this jittery movement of the wings when he is excited or when he’s really talking at someone, so that the audience understands very clearly that he’s communicating right now.

A lot of this was really just insanely well-crafted animation. Our animation supervisor Simone Kraus Townsend and her team really gave Morris the feeling that he was paying attention to something that was said.