I’m excited to announce you can now purchase issue #3 of befores & afters magazine from the online shop (if you’re already a subscriber, the issue has started being sent out to you).

Once again, this issue is a softcover 5×8 inch booklet with 120 pages of content, featuring full-color imagery. Price: AUD$25.00 + AUD$10 flat rate worldwide shipping. Please note, mail restrictions still apply in many countries due to COVID-19, so postage can be slower than usual.

Issue #3 is packed with a diverse range of VFX coverage. Here’s a special preview:

Meta VFX moments: You know those times in movies when characters appear to be utilizing visual effects, CG or animation hardware or software, but really aren’t? And where sometimes actual visual effects trickery is required to both make it seem as if the characters are using that particular tool, and to actually pull off the resulting imagery? That’s what this story is about. 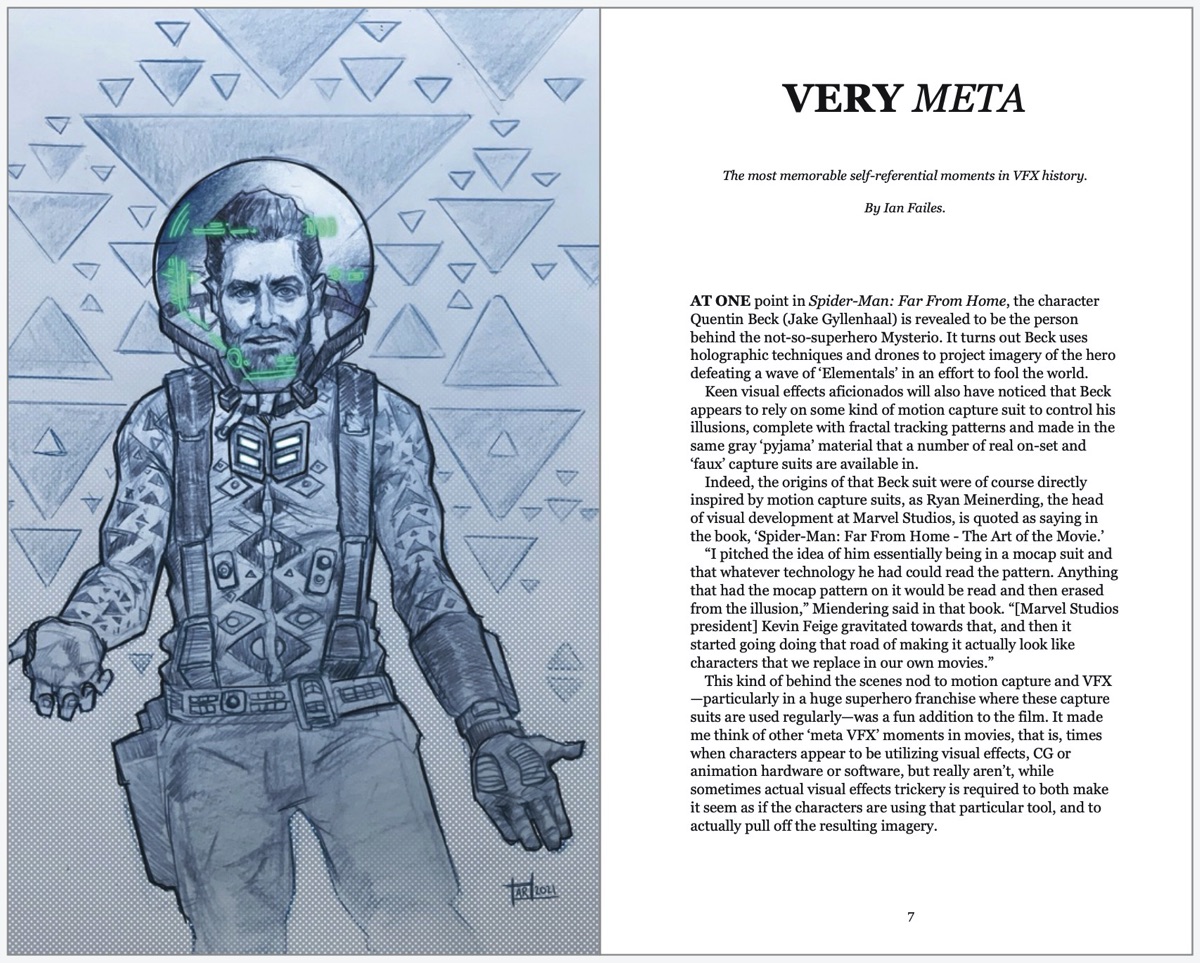 The story dives into the scanning scene featuring Susan Dey in Looker, another scanning moment involving the appearance of Robin Wright inside an actual USC ICT Light Stage in The Congress, the fake editing of stand-ins involving Arnold Schwarzenegger’s character in The Running Man (with some incredible exclusive imagery of Arnie), the bluescreen Albanian ‘fake war’ shots of Kirsten Dunst and some potato chips in Wag the Dog, and the pretend 3D software interfaces made for Bloodshot.

Practical effects solutions: A whole bunch of VFX and SFX supervisors weigh in here with a history of neat ideas to solve complex effects problems. You’ll see the solutions from films including Twister, The X-Files Movie, The Core, Bad Times at the El Royale and Terminator: Dark Fate. 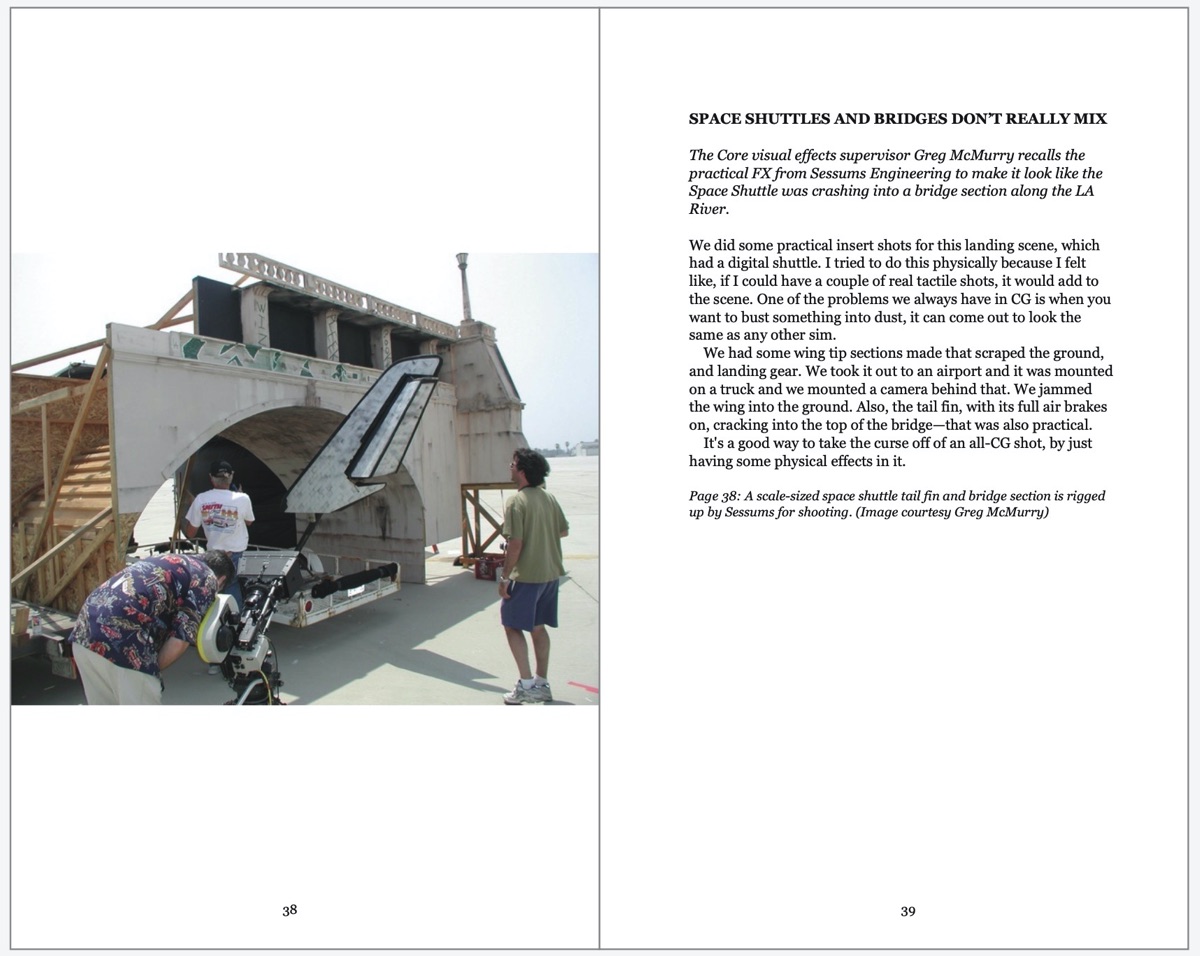 Greenscreen performers: Our cover feature. befores & afters asked stunt outfit Action Factory CEO Jayson Dumenigo, a veteran performer and now stunt co-ordinator, to outline how the greenscreen and bluescreen suits come into play in a typical action scene, including on the Netflix show Jupiter’s Legacy. Lots of fun behind the scenes imagery here. 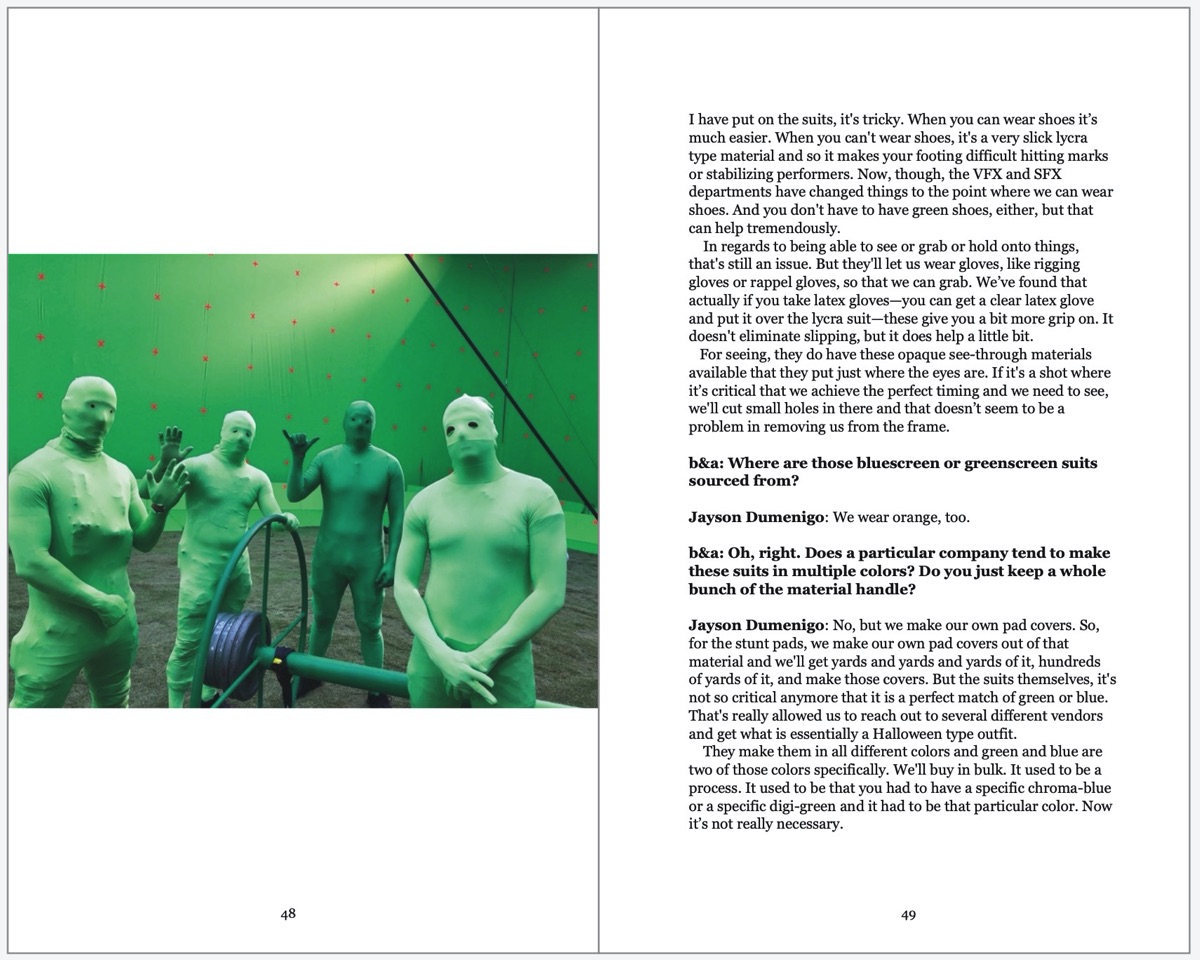 An oral history of Guinness ‘Surfer’: This article has appeared online previously at b&a, but there was such great insight into CFC’s work back then, and such great imagery, I felt it deserved a print presence. 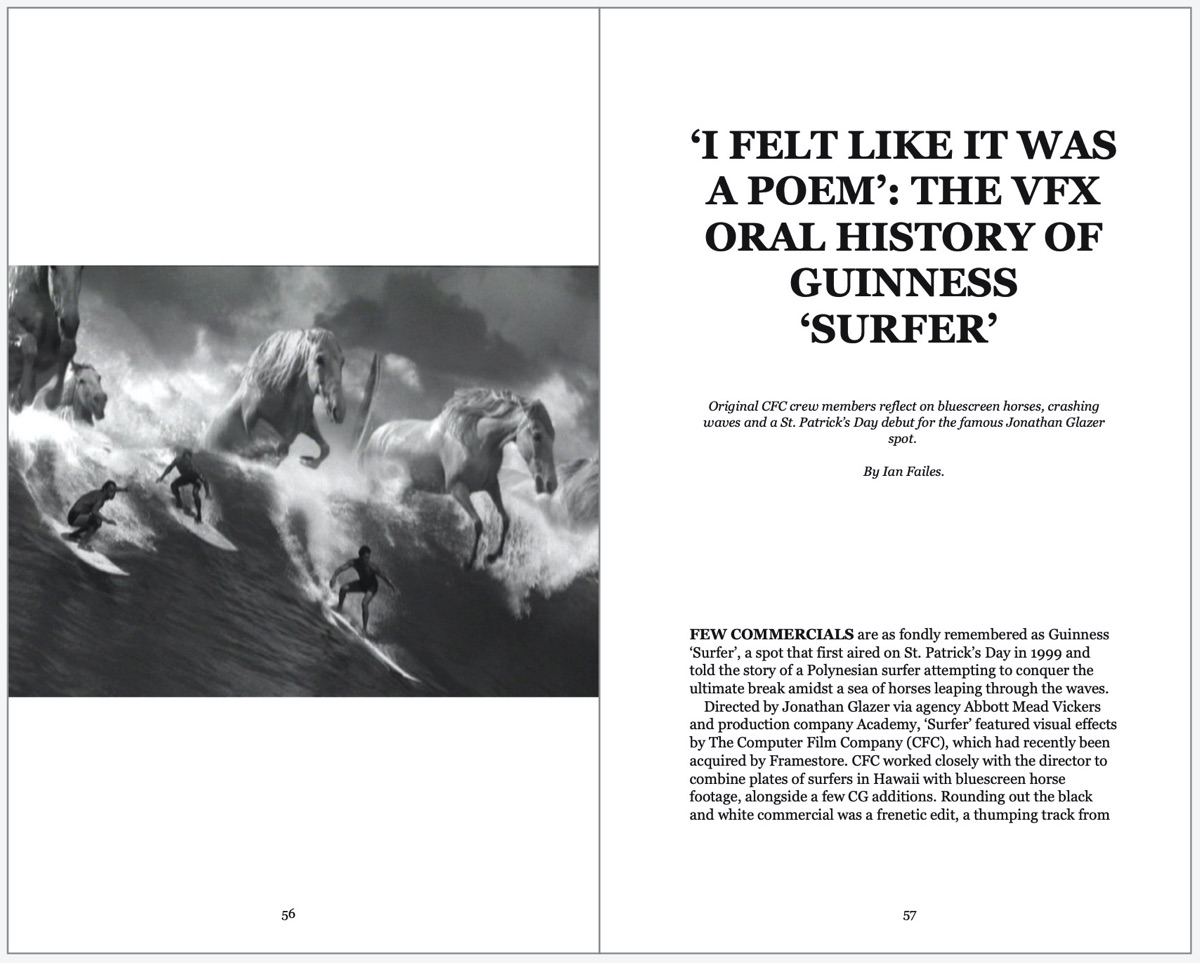 Henry Selick – a look back: The director of so many great stop-motion films and moments is profiled here, and again there’s some wonderful behind the scenes imagery to go with the story. 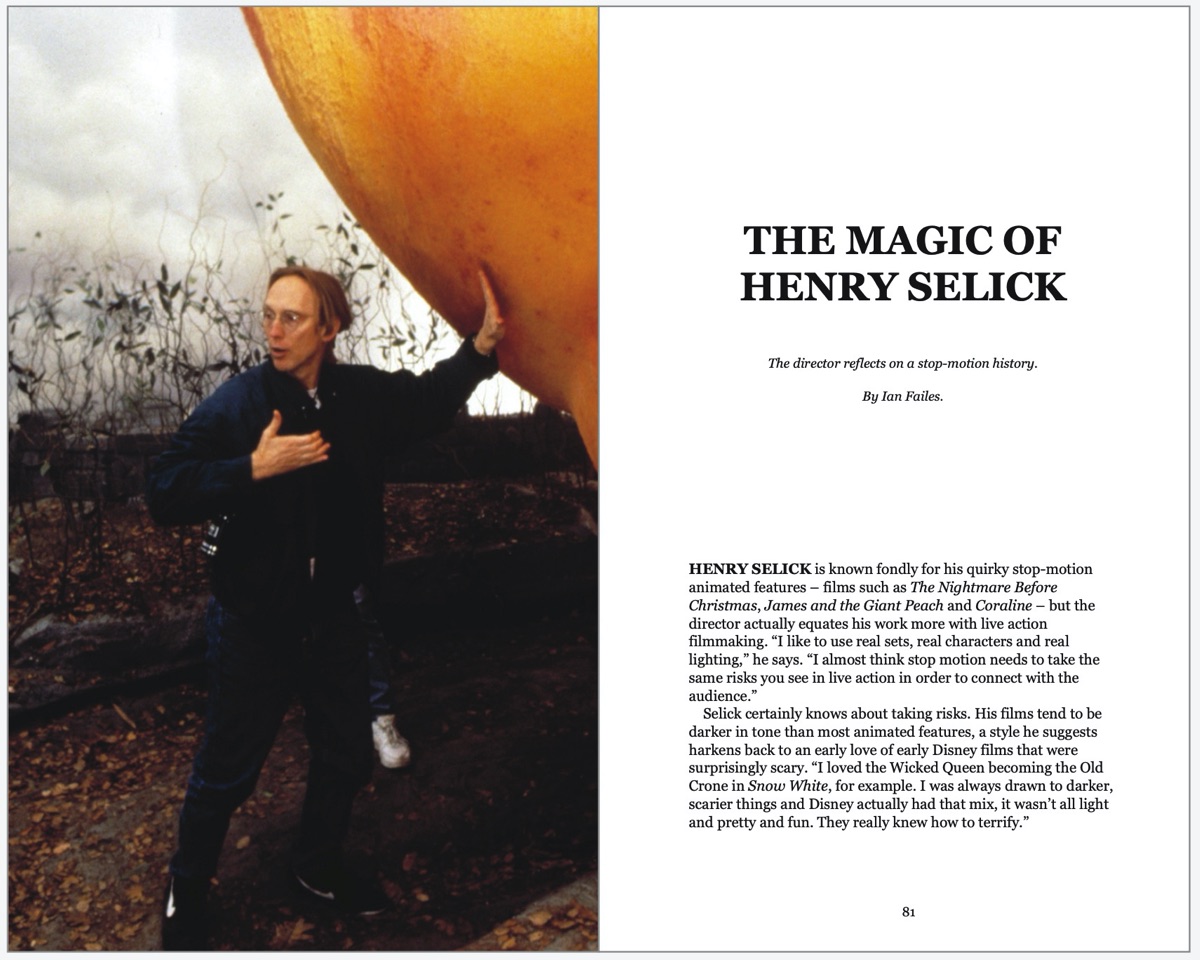 The vampires of Blood Red Sky: Scanline VFX breaks down how it crafted subtle face augmentations for the vampires in this Netflix film. 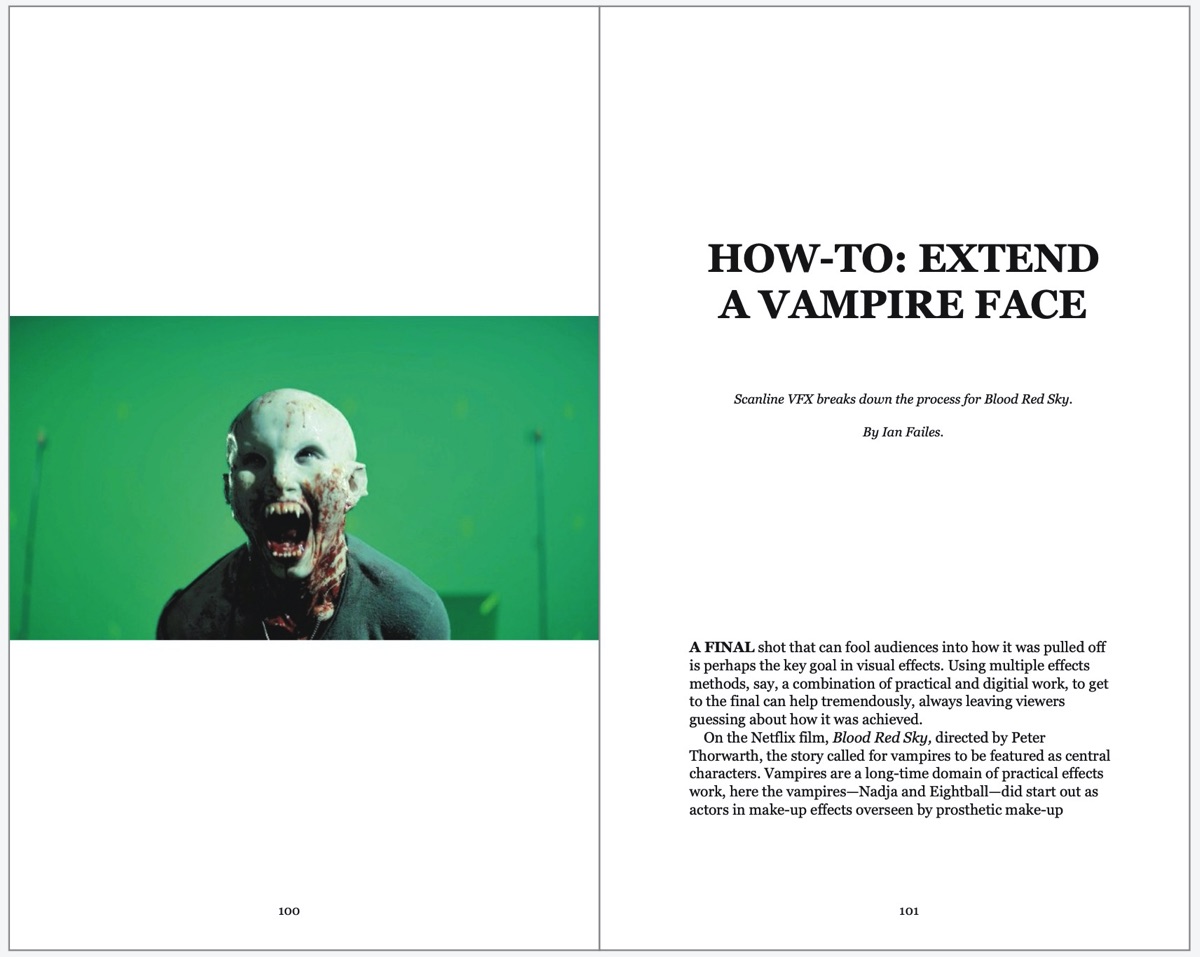 Tentacles, a practical effects guide: Industry effects artist Christopher Cooksey shows you how to make some creepy tentacles from easily accessible materials. Follow along with these step-by-step instructions. 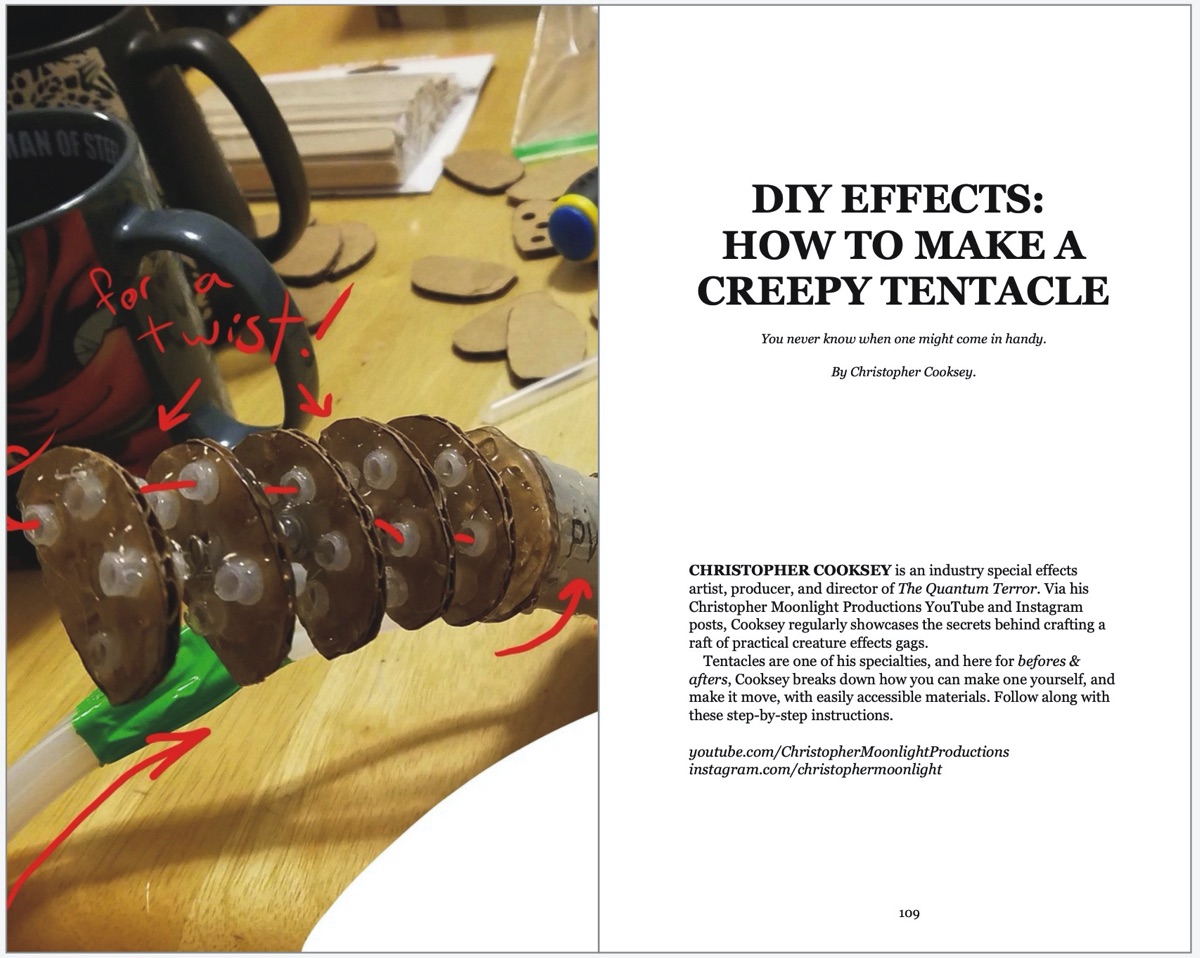 Sponsors: I can’t thank RE:Vision Effects and das element enough for sponsoring befores & afters. You can also check out info in the magazine about Women In Animation’s (WIA) Wia Talent Database.

How to get your hands on issue #3

Hope you enjoy this issue!