Among the several challenges Digital Domain faced in its visual effects work on Shang-Chi and the Legend of the Ten Rings was the creation of the Ten Rings compound, seen located in a remote mountainous environment. This was made even more tricky when a live-action reference shoot planned for New Zealand had to be canceled due to the COVID-19 pandemic.

Luckily, Digital Domain was able to conceive the environment with a range of other approaches. The studio also worked on several other scenes in the film, as visual effects supervisor Hanzhi Tang explained to befores & afters.

b&a: Let’s break down Digital Domain’s work for Shang-Chi—what did it involve?

Hanzhi Tang: The main part of the work was Wenwu’s compound up in the mountains. After he captures Shang-Chi and Xialing and brings them back to the compound, there’s a big helicopter fly-over over the mountains which reveals the fortress that he’s built up. We did that modern-day version of his compound, where it’s got the giant concrete fortress walls built up over it and it’s got landing pads and all that kind of stuff.

Early in the movie, there’s a reveal shot of Wenwu’s original Siheyuan-style compound. A practical set of this was built up to the first floor, and we created a fully CG version of that house built into the side of the mountain, the road leading up to it. We also created the mountains and terrain scatter, and the trees and rocks out to the horizon.

Interestingly, we were supposed to go to New Zealand to do photogrammetry of a natural location and then use that as the starting point of the model. But right then COVID started. First, production said, ‘Okay, well, you guys can’t go, but we’ll send someone up. We have someone available locally who can go up in the helicopter to take the pictures for you.’ But then that got canned as well. We ended up doing the full thing digitally. We just started from there, spending more time upres’ing (Digital Mapping) DEM data, just to get the shapes that we wanted.

That fortress was one part of the work, then in the post credits scene, we did an updated version of the compound with someone new running the Ten Rings organization. We updated it to be more modern, more tech savvy, and more in touch with what’s current. So there’s a lot of street art and murals over the whole thing, along with solar panels and more communications equipment. It has a more ‘tech era ’ feeling.

Then there’s a sequence where they have to figure out how to escape the compound. This is the garage escape sequence. Some of that was filmed in a garage where we basically replaced everything from, say, two meters upwards. That sequence actually was longer and got cut down a little.

We also did a lot of invisible costume fixes for Wenwu whenever he’s got the ten rings on his wrists. We replaced the costume rings on a lot of shots. One of the costume rings was five rings fused together in a bracelet. They wanted them to feel like five separate, heavy metallic rings. So we had to paint all that out, track it back in, and hand-animate the rings. They were difficult shots, but hopefully that just passes by seamlessly and no one ever knows; then we’ve done our job.

b&a: In terms of the environment work, I think that’s really interesting with the impact COVID had. I guess in the best case scenario, you would have got all that reference for the mountainous region. But what then was your approach, since you couldn’t get photogrammetry or reference?

Hanzhi Tang: We knew exactly where the location was they had picked in New Zealand, which was just north of Wellington. We started off with just the available satellite or DEM data for that location, and used that to give us a height field. That gave us something to previs cameras with and start blocking things in. But to get the detail on it, we had to figure out. ‘How do we want to do that scatter? Do we use Houdini? Are we going to just Zbrush everything?’ We wanted to still be able to art direct the shape of ridge lines.

We kept it in Houdini for a long time, and we worked on some tools that let you draw splines out to design ridge lines. If anything changed, you could just push and pull those points around and have it just update. We also did the tree and rock scatter in Houdini, and we used a terrain generation program called Gaea. We did end up Zbrush’ing high-res rock detail on top of that, too. With the exception of FX volumes—which were done in Mantra—everything else was Maya and Redshift, all GPU rendering.

b&a: For those establishing shots of the compound and the helicopter landing, what live action could they film, if anything?

Hanzhi Tang: They had rented helicopters. No real helicopters flew in the show. They were only used as props for characters to either get in or out of. It was a helicopter in a parking lot and the front row of guards as live action. We added CG soldiers in to add several rows of his guards. 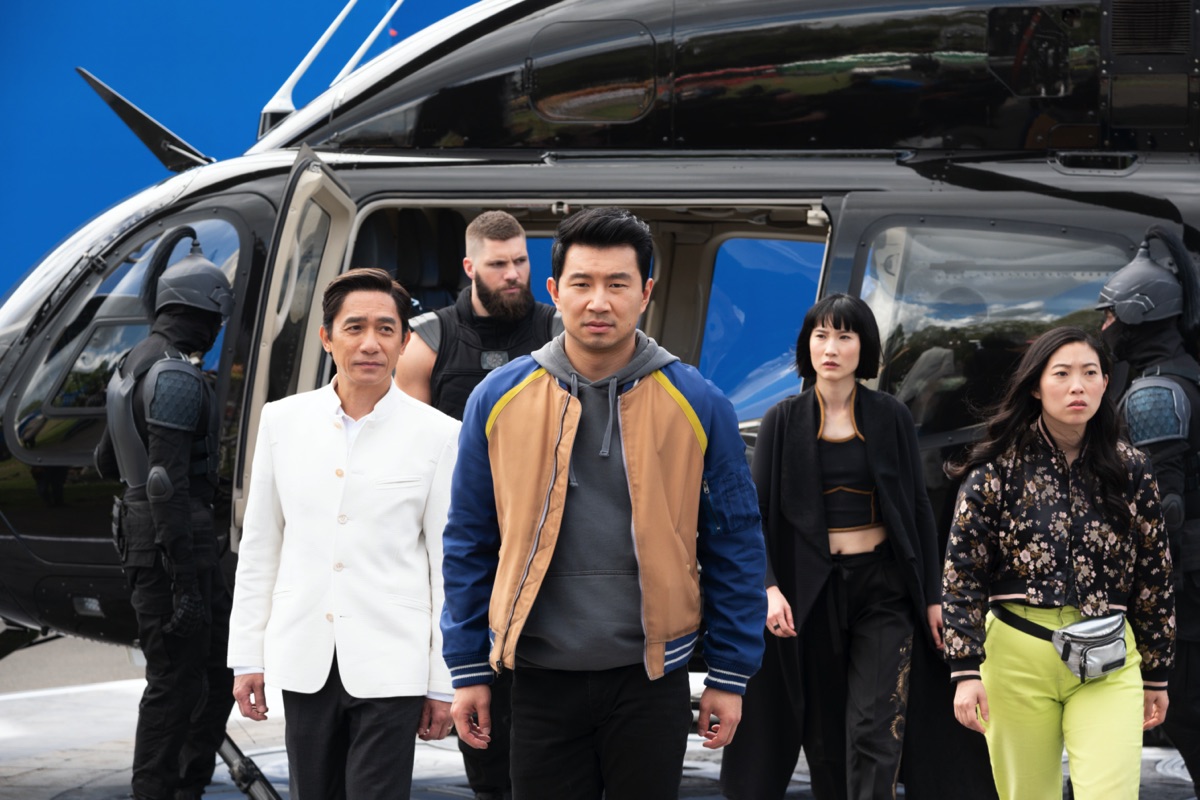 For the helicopter itself, when it’s a reverse shot and you see Shang-Chi getting out of the helicopter, the blades didn’t turn. If the helicopter was up close, we tried to keep as much of the real helicopter panelling as possible. We replaced from the doors up so that we can do the rotor blades slowing down, and coming to a stop. And then also the reflections – this black helicopter had reflections of the crew, and the surroundings. It was about trying to blend some of it out and update it and get the real CG reflection back in.

b&a: I was also going to ask you also about the mood in that scene. We don’t always talk about art direction from a visual effects point of view. What did DD need to input into that look and feel, which came from say the grayness of it or the clouds, or the starkness of the location?

Hanzhi Tang: With the compound, when you first see it in 1996, you’ll notice that the terrain is all lush and it’s covered in mostly trees and foliage. When the time jumps to present day, they want you to feel that there’s a jump in time. And so a lot of vegetation died off. It doesn’t look the same as it did. When he brings them back to the compound, it’s all a little bit of an unhappy time. It is overcast. It’s a pretty cold feeling to all the photography. I think it’s foreboding, ominous.

b&a: When you had to adjust the compound for the post credits scene, that sounds like a kind of fun thing to add in all this more modern paraphernalia.

b&a: If we then jump to the garage escape sequence, how did they generally approach filming that?

Hanzhi Tang: I believe it was in a garage location that they had found in Sydney. We ended up matching the real photography to our CG versions, and then blended it over a strip of bluescreen that they did shoot with. They had a practical BMW and bikes.

Where it was safe, they used stunt drivers, but we handled interactions where it was safer to have actors on a bluescreen setup. So whenever we had to do any of the bike stunts, there’s a CG takeover on the shots. We built a full CG BMW to match. Sometimes it’s a blend of live action, sometimes it’s the full CG vehicle. It was a fun scene.