“They had four trained pigs on set and they were all very good, fine actors, but…”

They do so in a daring helicopter extraction—right before an avalanche crashes into the prison—and then meet up with their former mother-figure Melina Vostokoff (Rachel Weisz), where they also meet the pigs Melina is now farming and experimenting on.

b&a: For the prison break, what was actually built for this location?

Sean Walker: For the environment itself, the idea was that it was an old abandoned, industrial complex set out on the middle of nowhere that they had reconstructed to be a prison cell. At Pinewood Studios, they have the tank lot, which is basically this huge circular water tank, which they repurposed for a huge circular silo. From the ground to maybe a storey and a half up, they built physically except for one half of it. One side of it was all bluescreen. And from there up, we built everything digitally.

There was also a fragmented set where you see Natasha fighting on the bridge. They built a portion of that bridge and a portion, just the corner, of the tower at one end of it. The set was highly, highly detailed and there was a lot of cage work and not much bluescreen coverage. So it ended up being a lot of roto and a lot of digital replacement in the end. 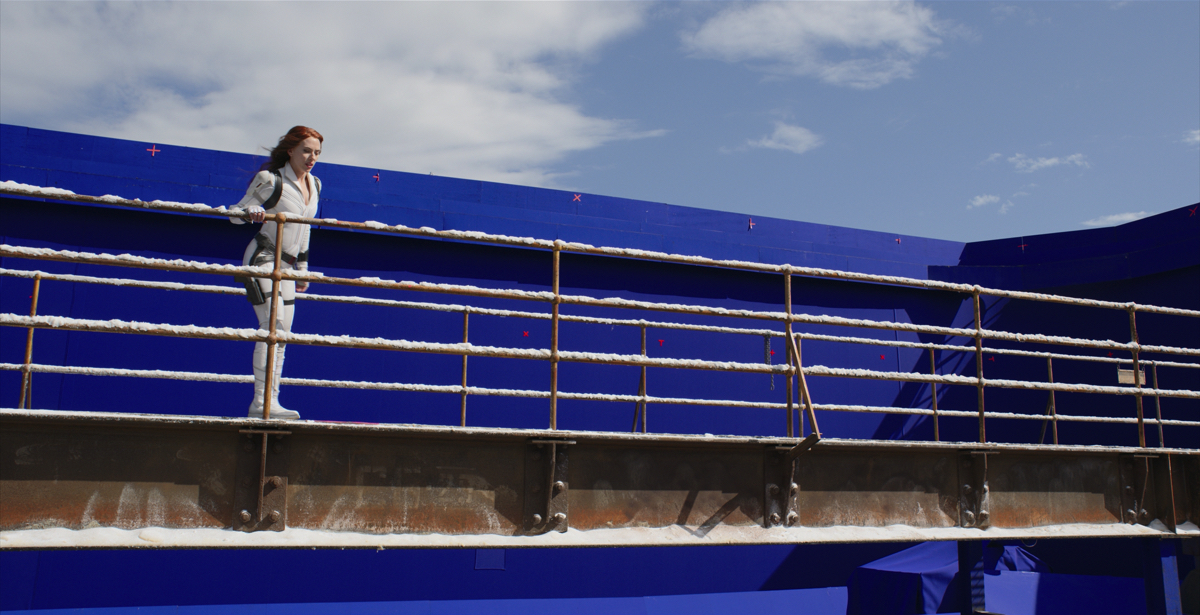 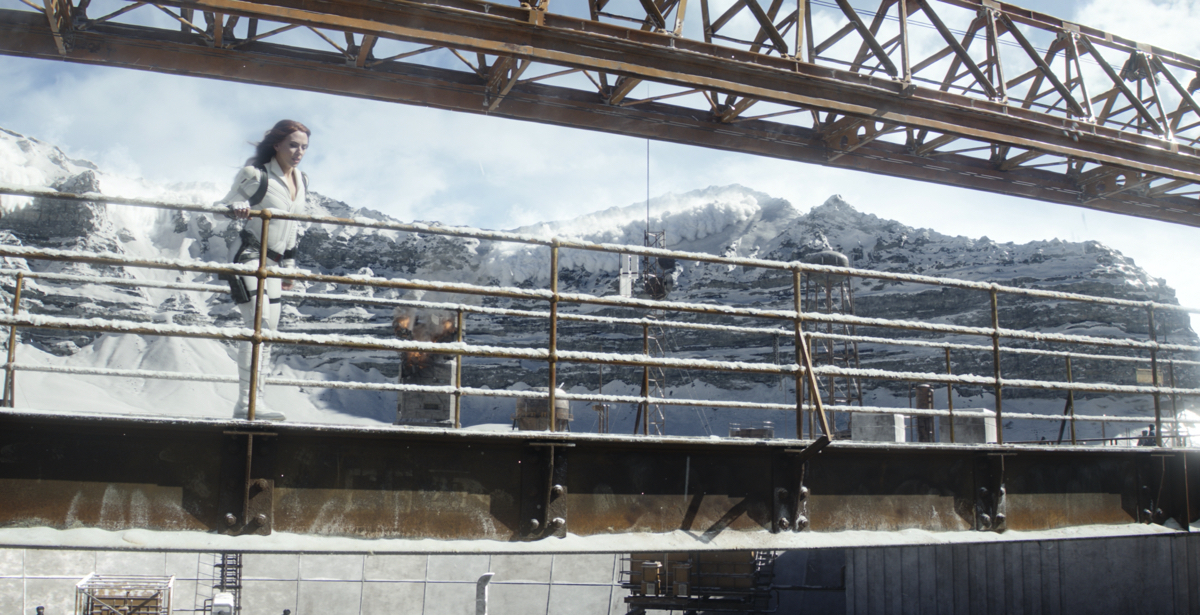 b&a: Were there any kind of real snowy environments that they could shoot as background plates or reference plates?

Sean Walker: No. There were a couple of aspects to the snow. First, the snow in the Gulag itself was all done with salt, just Epsom salts. They just absolutely covered the set in it. It was 38 degrees Celsius in London at the time. It was scorching hot, all these poor people and extras all wearing full-on Tundra jackets. All of that snow was obviously practical.

For everything beyond that, they did go to Svalbard in Norway, where they took a lot of footage. We didn’t end up using any of the actual footage itself, but we did use the literal place in Svalbard as our environment and set, so the mountains you see in the background are literal mountains that exist in that world. The Marvel team went up there, they got photogrammetry of that entire mountain side and we recreated it in CG. Then we just placed our Gulag set at the base of that mountain.

Sean Walker: There was also a third set where we had an actual Mi-8 helicopter rigged to a gimbal set. So they had Scarlett and Florence in the helicopter as it was moving around. We had to replace the exterior of the helicopter in almost every single shot because of reflections and lighting and damage, including when it’s taking all the hits from the .50 calibre gun tower.

Karl Rapley, our animation supervisor, was extremely good in making sure that we held continuity throughout. So a lot of the helicopter involved a full vis-dev where you could track its motion throughout the entire sequence. The sequence changed a little bit, so it was something we had to redo every once in a while. The interior was, for the most part, practical with additional bullet holes on the inside that we added in.

Every time where we’re down in the Gulag and on the bridge, the helicopter is always fully digital. There was a lot of stunt work, so as far as the digital double work goes that involved the helicopter. They had stunt doubles that would jump out of the helicopter. And that iconic flip that Natasha does onto the bridge was actually done by a stunt double as well. We replaced her from a certain point on, but that’s actually her landing, which was pretty cool.

b&a: Alexei is called on occasionally to do some Super Soldier stuff there, like jump and climb. What again was the mix of where you could do some stunt work, but then do takeovers?

Sean Walker: The climb up to the side of the silo where he gets zapped, that was all stunt work. We did do some face replacement stuff there, but David himself was hanging by the top and did lot of the work at the very top of that climb. Then there was the jump and swing, where he jumped from off the top of the cages to the T-bar as he’s making his way up to get to the helicopter. That jump and swing was also started out as full stunt work. It was a huge jump with nothing below him, so it was super cool. But we did have to replace him in the end because we needed that super power feel. He needed to be able to lift himself with his arms and nothing else. And the wire work just felt a little bit too much like wire work, so we did end up going full digi there.

b&a: When that avalanche does kick off, what were some of the big considerations there in terms of just generating that snow realistically, but telling a story about how long they had to go to get out of there?

Sean Walker: We wanted to make sure that we gave the filmmakers as much flexibility as they could possibly want at the end of the day because I’ve been on quite a few Marvel shows myself, and I know that the story evolves and changes and providing that flexibility to the filmmakers is what I really want to achieve as part of our goals.

So we created a setup that was extremely flexible. We were able to alter the timing or to add levels of detail here and there on the avalanche. The main thing was to make sure that our turnarounds were much quicker. Taking down from days to a week to a day, that kind of thing. So the big challenge there was just making sure that we had setups that could achieve that.

We had base sims that were fast to simulate and render and on top of which would allow us to get timing and alter that timing. And then we had all the additional detail that goes on top. We used our proprietary solver Synapse that allows us to simulate more than we’ve ever done before. We have a ranked system that allows multiple machines to work on the same simulation at the same time, which allowed us to simulate an avalanche that was over a kilometre long.

We had what we called the shooters, the flying projectiles, at the front of the avalanche to come flying out. We had additional particulate that gets thrown in front of camera, multiple layers of ejected wispy snow. It was easily the most detailed avalanche that we’ve done so far. 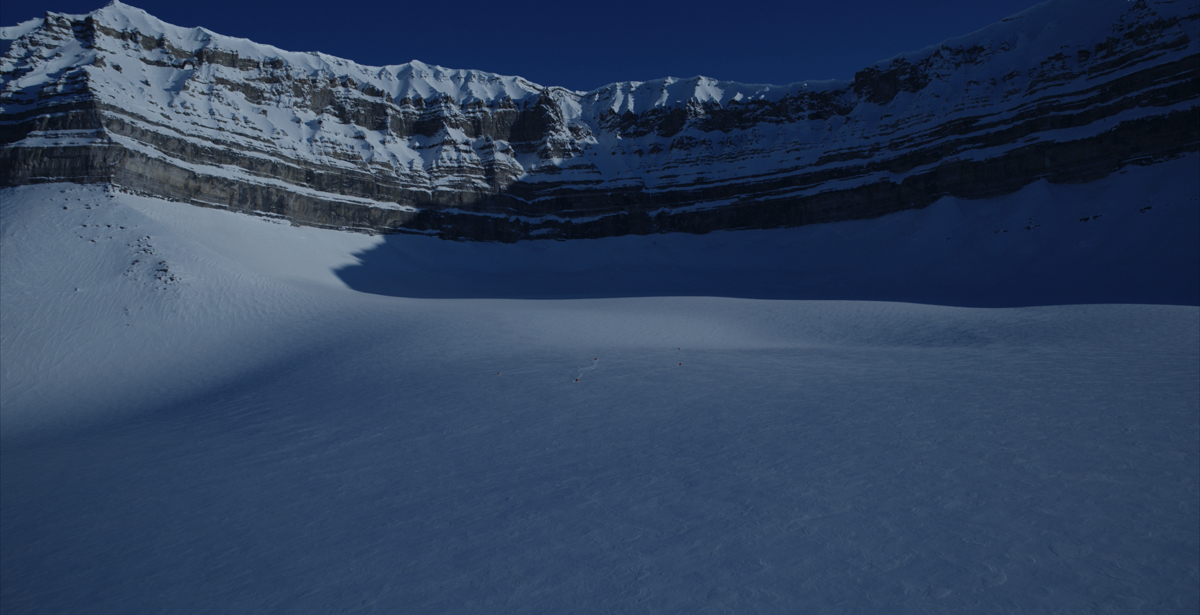 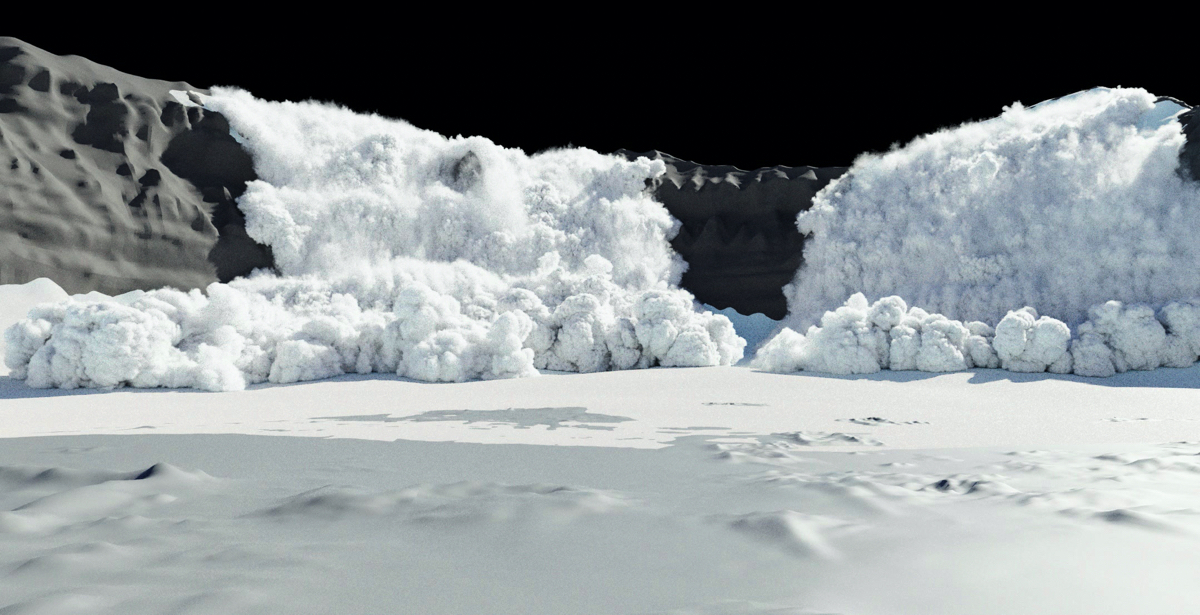 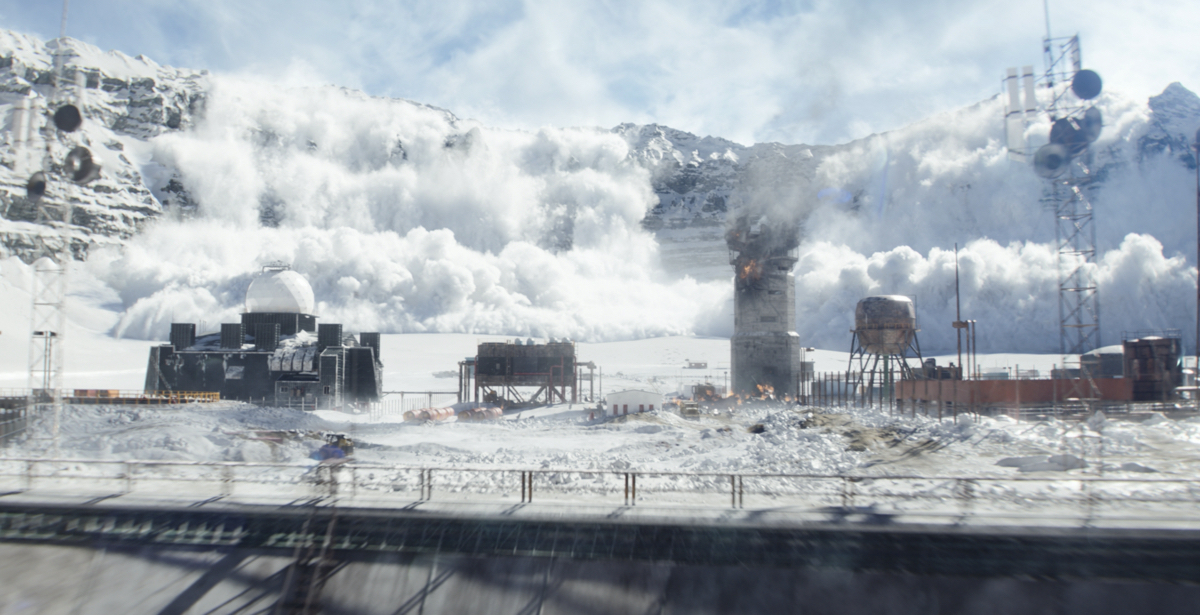 b&a: Once they escape, they ultimately run out of fuel and do this belly flop landing. Tell me about the challenge there in terms of physics, but, you know, it’s a funny moment, obviously.

Sean Walker: I thought it was going to be tricky, it was going to be one of those things that was either going to work or not. But in all the test screenings, it got a laugh every time. I thought it was going to be tricky in that we’d have to do it either hyper-realistically or not, but we kind of just nailed it, right out of the gate. I felt like we only really did a couple iterations in animation and obviously we did all the simulated smoke and dust and everything, but for the most part, it was played as a bit of a jokey moment and it just kind of paid off that way.

b&a: Did they try and drop a real fuselage at all?

Sean Walker: That fuselage that you see as they exit, it was part of that set and it was brought out there and dressed and all we did was add the helicopter blades and the tail and the extra smoke that comes billowing out of it. But they did bring that on set and we just use that as our positioning and they didn’t drop anything physically. We did all that in CG.

b&a: OK, now, later at Melina’s house, I’m not sure everyone will realize that was some CG pig work. How did Weta Digital approach that?

Sean Walker: They had four trained pigs on set and they were all very good, fine actors, but the main problem was trying to get the pig to believably feel like it wasn’t able to breathe. They were able to have the pig drop down, kind of flop over, but pigs are generally quite twitchy. And so it was constantly moving. There’s a couple of shots where we just did nothing more than stabilize its nose. And then the digital pig was specifically for where it chokes, it falls over and it gets back up again.

No animals were harmed in the making of this film… in fact, they quite enjoyed the process of being filmed for the VFX, because snacks!

The original model for pig who has a temporary “nap” in Black Widow was a hungry Kunekune pig called Toggle. @theblackwidow #WetaDigital #VFX pic.twitter.com/OPUDSdhAED

That pig was called Toggle. It loves McDonald’s fries, which is another weird sort of digital asset we had to create. We had to swap out the digital fry for a pickle because I guess a pickle is more Russian.

b&a: Was there something your team learned about pigs that you hadn’t really known before or some sort of behaviour that you really wanted to mimic?

Sean Walker: These particular pigs are called Kunekune pigs, and they have little nodules on their necks. You might notice them the next time you see them. They’re like little teats and they just kind of flop around on the neck. And it’s nothing that I’d really sort of focused on before, but they’re quite active. So we had to simulate them a lot of the time and they’re just kind of oddities that we had to learn what they were, how they worked and match the same kind of flexibility and floppiness, I guess, of these strange nodules.