Plus, a breakdown of some of the film’s other intense visual effects.

There’s a stunning shot in director Antoine Fuqua’s Infinite, which is streaming on Paramount+, where Mark Wahlberg’s character leaps off a cliff on a motorbike onto a flying C-17. It’s just one of the many visual effects crafted for the film by DNEG, overseen by production VFX supervisor Pete Bebb, and DNEG VFX supervisors Lee F Sullivan from DNEG Montreal and Stuart Lashley from DNEG London overseeing a range of sequences that tell the story of a man who discovers his hallucinations are actually visions from past lives.

befores & afters asked Sullivan and Lashley about key VFX moments in the film.

b&a: For the Hub – for wide views of the mountainous area, what plates did you start with? What were some of the foliage and  nature-building tools and techniques you used for things like trees  and waterfalls? What do you think made these final shots ‘feel’  natural and real?

Lee Sullivan: Client-side VFX Supervisor Pete Bebb sent us on location to the Khao Sok national park in Thailand to supervise the aerial helicopter and drone footage. We had a brief on the kind of plate we needed for exterior views of the Hub structures, and for views from the inside looking out – but it was up to us to scout a range of suitable locations and gather lots of options for editorial on-site. 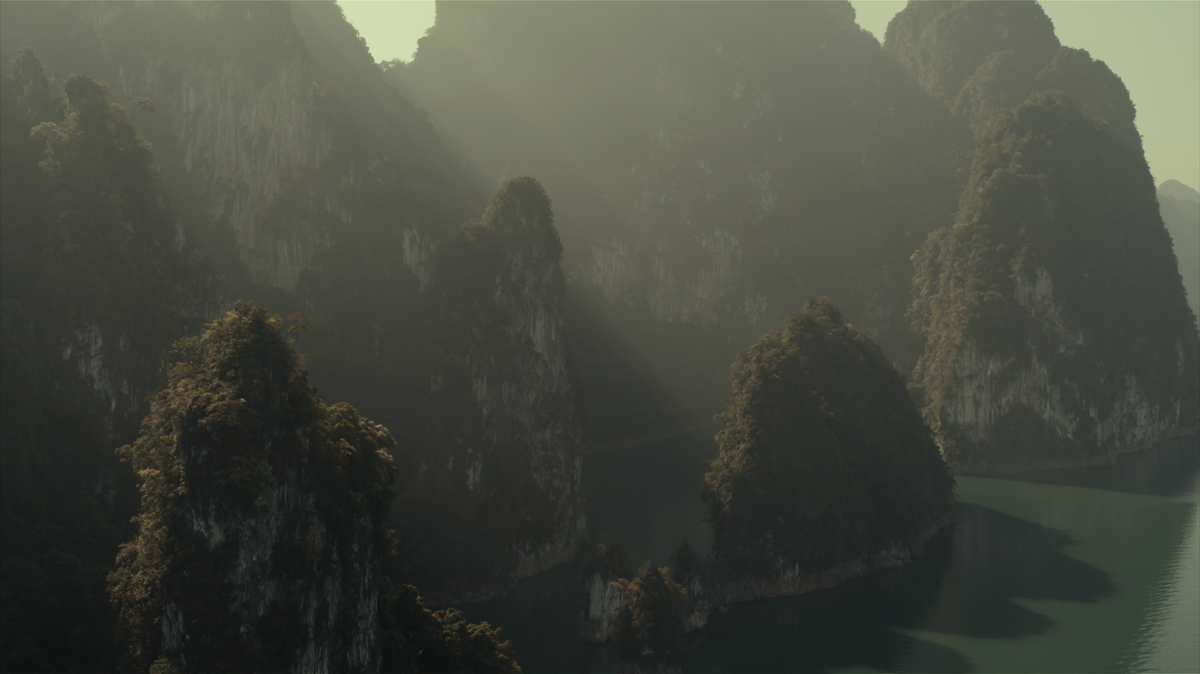 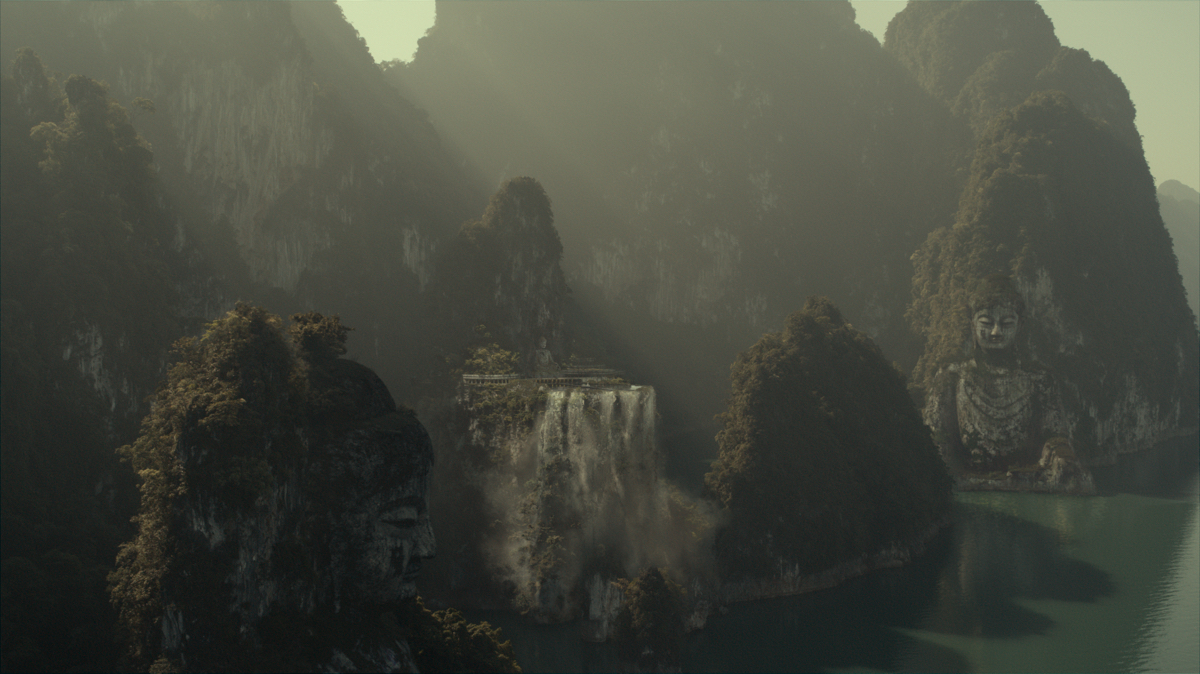 The park is incredibly beautiful and surrounded by impenetrable jungle and vertical mountains that are impossible to access by road; we did all our scouting and transport by boat on the lake, or by randomly discovering new angles in pretty much every helicopter sortie. I kept a log of which locations we had acquired at which time of day, and we kept zooming around the lake making sure we had all the required times of day per location.

We had two units aside from the aerial unit which were continuously gathering reference photography of vegetation and rocks, and one shoot TD who we marooned on an island in the middle of the lake all day for two days shooting one HDRI per hour! He had to be in the middle of the lake, far away from the sheer mountains, to get the unobstructed sky.

Another unit spent two days gathering water-level footage at different times of day in different locations for the vista in Nora’s bedroom. The vista from Evan’s bedroom was assembled from tiled drone footage shot about 30 metres up at multiple times of day. We used drone photogrammetry to build a trackable base for our CG environments, but the environments were so big we had to extend the build using heli footage from over the maximum altitude of the drone.

Selecting the plates from 8 hours of footage was a challenge by itself!  Once we began shot work, any time we tweaked or pushed plates too far with CG Pete would always bring us back to reality. The idea of the Hub was that it was built centuries ago as an organic part of the environment, so we only ever extended or tweaked plates where absolutely necessary.

For example, the stunning vista beyond the CG Buddha reflecting pool was a 16k tiled drone footage plate shot at midday and at sunset. We used Clarisse to scatter and render the jungle, and Houdini to simulate the waterfalls, which were based on the Skogafloss waterfall in Iceland.

b&a: For that pull-back shot through the Buddhist temple, can you talk  about the build for this environment? Was anything scanned/surveyed  for the construction? How were live-action actors filmed? What did you  find was the toughest thing in matching the real or practical temple  set with your CG take-over?

Stuart Lashley: The temple at the end of the movie is a digital recreation of the Angkor Wat temple in Cambodia. We sent a team out to capture stills and Lidar of the real location in order for us to construct it digitally.

The temple played not only in the big pull-back shot, but also as the cerebral underwater environment of Evan’s memory. Constructing that environment involved taking the digital temple build and rearranging all of the component parts to make a sprawling maze-like world that seemed to go on forever.

For the ending shot, we were much more grounded in reality and used stock drone photography as the main reference for the look and lighting.

The actors were shot on a section of a set which spanned a couple of arches with a section of wall. The rest was all extension. We were presented initially with storyboards that blocked out the extent of the camera move and then had to figure out the actual camera path through the temple. Additional monks were shot on repeat camera passes to sit within archways as we passed them.

b&a: For the run up to the bike jump and the actual jump onto the C-17  jet, can you break down the various live-action plates or backgrounds  that were able to be filmed for this, including any  bluescreen/greenscreen plates? Where it needed to be a digi-double and  bike, what were the challenges in representing some real-world physics  in riding and the jump?

Stuart Lashley: Starting from the wide shot in which Evan launches off the cliff – that one starts with a practical bike and stunt rider which then transitions into a digi-double and digital bike half way along the run. The C-17 is CG for the entire sequence. The background is a shot plate, but once we’re up in the air in later shots then the backgrounds become digital environment work built from drone photography.

The next couple of shots as the bike lands on the wing – the bike and Evan are practical stunt work shot on a built section of wing against greenscreen. The rest of the plane is then extended in CG with any water and spark effects added.

The rest of the sequence consists of either Mark or his stunt double performing wing-top action for close and mid shots, digi Evan for the wides, CG C-17, CG mist, water, fire and explosion FX and the digital BG.

Antoine was very keen to capture a sense of just how challenging the cinematography would be in this situation so we were encouraged to lose framing and imagine the operator trying to fight the elements as much as Evan.

b&a: How was the C-17 modeled and built? How did you handle flight  dynamics and moments when the engine explodes and more damage occurs to the plane? How were scenes of the character atop the plane  captured?

Stuart Lashley: The C-17 was modelled and textured from photography of the real aircraft. We had to alter the look to be more of a ‘stealth’ dark grey, for which coatings of real stealth aircraft were referenced.

The detail level had to be incredibly high to allow us to get right up to the surface in some shots. We wanted to make sure the scale of it was understood in all scenarios and we were constantly referencing and adding small details to help.

The flight and movement were derived directly from footage of the real C-17, and we only pushed that in shots where an extreme move was required. Both the look and action of the plane in our shots were continually compared against the real footage by Pete and Antoine to ensure we were hitting the level of realism required.

For when the engine explodes we had to source whatever reference we could find – but there was no direct reference for the scale and conditions of an event like that. We iterated until Pete and Antoine were happy that the physics felt right. Pete had also shot some engine explosion elements which were immensely useful.

b&a: For the fight inside the fuselage and the skydiving moments, what  kind of stunt performances were possible? Can you discuss here any  digi-double take-overs, wire removals etc? What things helped ‘sell’  the dropping through the air here?

Lee Sullivan: The fight inside the fuselage was well choreographed and only required a handful of digi-double face replacements. It was shot in a gimbal rig to simulate the plane barrel rolls so we didn’t have to cheat any physics: it was all in the plate. There is an intense super slow-mo shot of Evan slicing bullets in midair which was shot green screen with a camera flying in a circle around Mark Wahlberg at insane speeds. It was a challenge to get all the elements properly balanced in that shot, especially with the hot exterior light coming in through the hole in the fuselage.

They had a brilliant idea for the freefall sequence to shoot an exterior wind tunnel setup with professional stunt performers flying around a controlled environment in three dimensions – so in most cases the stunties are actually ‘flying’ rather than actors on wires pretending to fly. You have a much better grounding in physics to base your sequence on. We built high, medium, and low altitude setups with layers of cloud cards in Nuke and 3D clouds rendered in Clarisse to get parallax, and we blocked all our layouts in vertical drop space so you are actually falling at terminal velocity in every shot.

For closeups we relied on tried and true methods of cam shake and closeup cloud elements whipping past the camera. We did 4D captures of Chiwetel Ejiofor and Mark Wahlberg’s faces (lots of screaming and grimacing!), and plugged them into our body tracks for a quick turnaround on the face replacements.

The shots of Evan falling into the ocean are full CG with ocean, foam and bubbles simulated in Houdini – no digi-double takeovers were required.