Behind the shots with visual effects supervisor Jim Mitchell.

Episode of 1 of Netflix’s Jupiter’s Legacy includes a mammoth fight sequence known as ‘The Hilltop Battle’. It was filmed almost completely on a greenscreen stage and was full of elaborate practical stunts as well as intricate VFX work.

Here, visual effects supervisor Jim Mitchell discusses the planning and execution that went into the sequence, with befores & afters.

b&a: What are the first things you had to do in terms of preparing this sequence?

Jim Mitchell: I started a conversation with Jason Sperling [visual effects at Netflix] and [original showrunner] Steven DeKnight way back at the end of 2018, and came on at the beginning of 2019. That was always the sequence that was looming over our heads. I mean, not just visual effects, but costumes were critical, production design, and certainly the stunt work that Philip Silvera and his gang did. 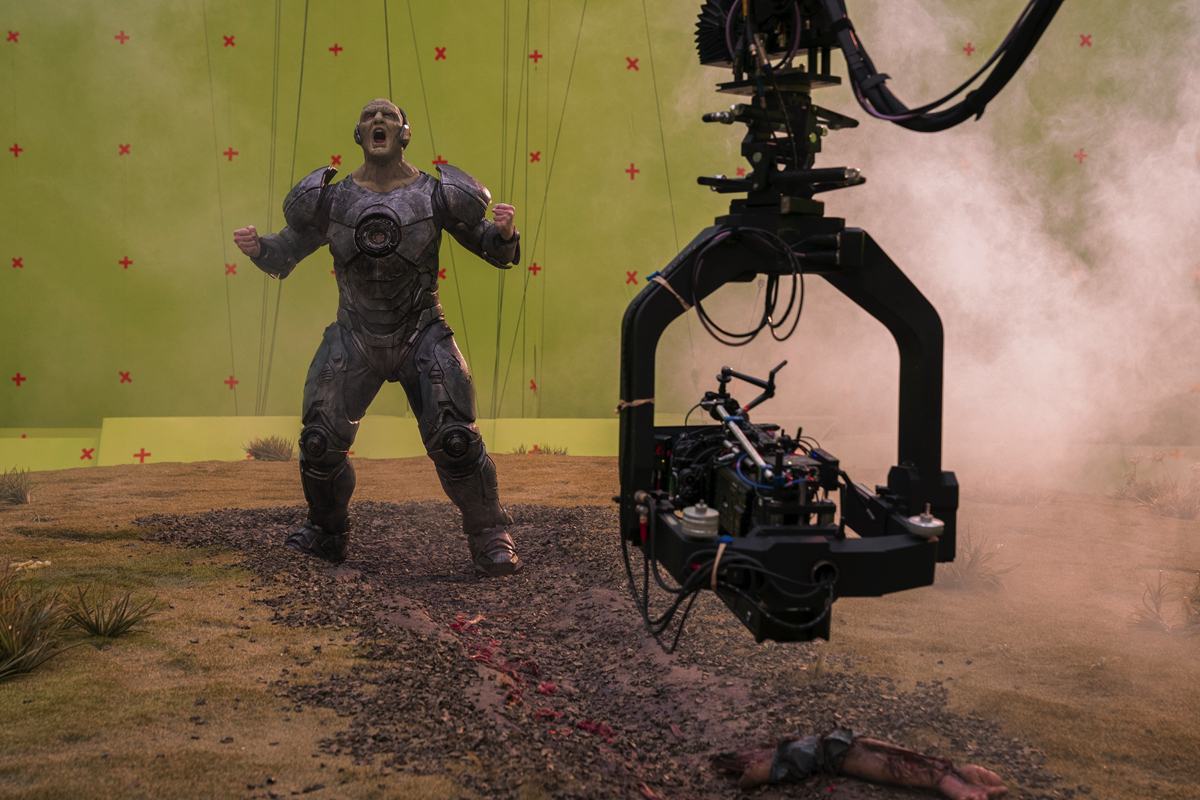 b&a: When you’ve got a sequence that’s so complex like that, where did you start in terms of concepts or boarding or previs?

Jim Mithchell: The first thing is, you’re taking the script, and you’re breaking it down, and then Steven and his writing team coming up with the visuals. And obviously, we had the graphic novels to lean into as well. There was a lot of information we were trying to pull from that. [Visual effects producer] Christina Graff and I hired this great concept designer, Houston Sharp, and he started initially with a lot of, ‘What are these effects that are going to happen, like with Ectoplex and Ruby Red and characters like that? What were their super powers? How are they integrated? Where was this place?’

There was talk of where we were going to be shooting, and ultimately when it became Toronto, it was like, ‘Where in Toronto is our hilltop?’ And I think ultimately the production designer, Zach, found this place, this old farm out about an hour outside of Toronto, that became the look we wanted.

This was always written as pre-dawn, I believe. Which means you’re looking at a window of what’s supposed to be 20 minutes of that sort of look and lighting, that if you commit to it, it’d take you a year to probably shoot the whole thing.

And then you’re getting into discussions with the stunt team and Phil like, ‘Well, what can you do? Are you going to put cranes up? Are we’re going to start erasing all those cranes? And well, if the sky’s not right, then we’re throwing up a bunch of greenscreen?’

I was trying to convince everyone that you’re going to have to build this environment in the computer. And it’s going to be a real as if you were there, but it’s going to be controllable. And it’s going to mean that you can rig and prepare the stunts a little bit more elaborately than you would on location, and then, the convenience of obviously shooting on stage.

So it ultimately just kept pushing its way towards the stage. I think Steven was hoping maybe some of it could be on location, but just the practicality became, ‘Alright, we are going to create this environment for you, and free you up to do anything and everything you want in that sequence.’ 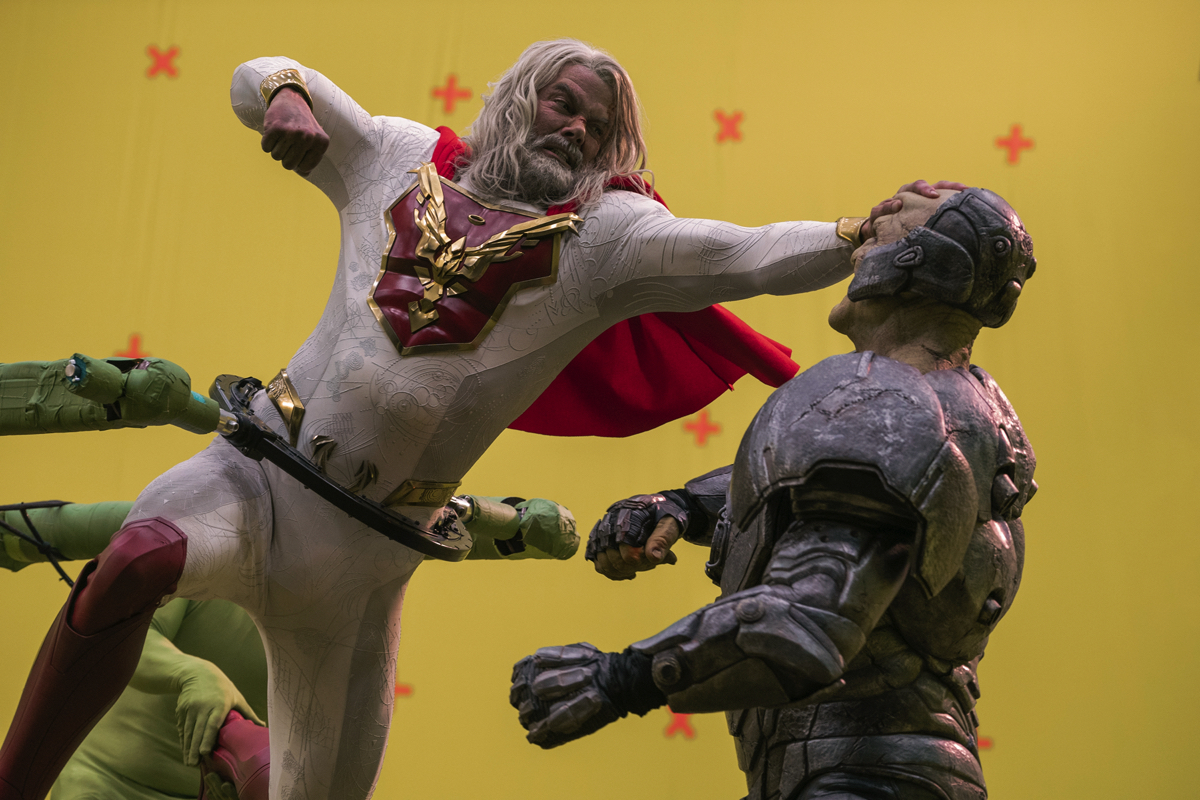 b&a: I’ve always loved the stuntviz that happens with a sequence like this. Tell me about if there was any kind of relationship between Phil’s stuntvis and any kind of early previs done for the sequence?

Jim Mitchell: Phil is so good at that. I mean, it’s a calling card of his that he can do these stuntviz’s, and as elaborate as they are. But there was a paralleling where I was previs’ing some ideas, too. In the process of rehearsing, the stuntviz just sort of evolved as it went.

b&a: Can you discuss a little more about the collaboration that does happen between stunts, VFX, and costume to pull off particular shots?

Jim Mitchell: There were so many things to think about. The costume department had to think about wire harnesses in the costumes. There was a plan to use this other system called the Tuning Fork that allowed a much more puppeteering up of some of the stunt people. And just the nature of we were shooting a hilltop, which is covered in grass, and so what is it going to be bluescreen, greenscreen? Well, there’s costumes that were blue. There’s costumes that were green. So ultimately we just had the bite the bullet. We shot with greenscreen and did a lot of roto. Every character in that fight, and more throughout the show, was scanned. DNEG, which did the VFX for the sequence, were amazing, overseen by Xavier Matia Bernasconi there.

As much as we could, we let the stunt team do what they could do. And when we needed to take over, which obviously was a lot of the dynamic flying and stuff like that, you want to use those stunt characters and the real actors, the Josh’s and the Leslie’s, when they’re right there, right in front of the camera there. And then when we can, we can take over and allow more dynamic movement with the digital character.

Blackstar in his armor was obviously this amazing creature that KNB EFX and Howard Berger and his gang had built. Then in post, we came across some beats in the hilltop where we said, let’s do something more. He’s got these little nozzles that looked like he should be able to fly with them. So we were able to elaborate on his costume and character. And that was all done after the fact when we were in post, and allowed us to get some more dynamic beats to the fight itself.

b&a: What did you find were the challenges in creating a dawn look and crafting a background environment?

Jim Mitchell: You’re trying to anticipate what that pre-dawn lighting is. So we were out there at the real location, and we did shoot some drone plates. The DOP Danny Ruhlmann and myself had gone out there for some lights studies. You try to take that back to the stage, and Danny does his best to create a sun and the ambiance of what that is. But you’re still surrounded by this whole greenscreen and on a green hilltop. We had a lot of issues with the look of the hill. It’s just hard to create the nature of grass and stuff like that.

DNEG and Xavier and his team had to do a lot of patchwork on the hilltop to make that work as well, and just trying to keep that balance. One thing that it gave us by shooting on a stage, though, was that we could look anywhere. It wasn’t an issue of always shooting in one angle. We were able to swing it around 360 degrees if we needed to. That meant an elaborate bit of environment to build, both the foreground with the trees and the detailed grass and plant work, and then ultimately the depths of the hills and the woods and all that surrounded our main hill.

b&a: With digi-doubles, how did you approach takeovers?

Jim Mitchell: I think we had maybe a couple takeovers, but the cuts allowed us pretty much standalone shots. But I mean, they certainly ended up having to stand up more than we’d imagined. You go into it and say, ‘Hey, we’re going to just use the digis in the distance shots.’ But as you get into it, and you find that something didn’t work with a stunt or whatever, you’re start to having to push that digital character forward towards the camera a bit more than you imagined. I think they worked fine. I think they did an amazing job of building them and adding some elaborate type shots that we couldn’t get on stage.

There were some shots that were all-digital, either an all-digital Blackstar, or all-digital superheroes. And then you’re looking at a completely digital environment as well. So there’s a good handful of shots there that are completely computer-generated.