A look at the production of the SparkShorts at the studio.

A few years ago, Pixar launched its SparkShorts program. Artists at the studio were given the chance to pitch and make animated shorts, and do so not necessarily using Pixar’s usual 3D pipeline.

Enter director Steven Clay Hunter’s Out and Madeline Sharafian’s Burrow; two of the SparkShorts that have made their way onto the Academy shortlist for best animated short.

befores & afters got a chance to ask Pixar about how these shorts were made, including the crafting of a completely 2D film for Burrow, and going with a stylized 3D look for Out.

b&a: To work on a 2D animated short, did you feel like the crew needed to think ‘differently’ at all? In what ways was this different, but also similar, to other Pixar productions?

Michael Capbarat (producer, Burrow): With Burrow being a 2D animated film, all of us definitely needed to think differently. From the outset, our director Madeline Sharafian’s vision for the film and its many cozy subterranean cutaways required one thing in particular – a lot of visual detail.

Inspired by the charming illustrations from children’s books by Beatrix Potter and Richard Scarry, our hope was that the audience would want to luxuriate in the detail of every nook and cranny on screen.

But unlike a traditional Pixar film, which takes several years and hundreds of people to complete, Burrow had six months and less than 30 people to bring this cozy, detailed dream to life. So we had to think outside of the box. That’s where the decision to make a 2-D film came into play.

Cribbing many lessons from our 2-D predecessor, the Pixar SparkShorts film Kitbull, we decided to mimic the traditional Pixar pipeline but cut as many corners as possible, keeping high priority shots always at the top of mind. Instead of the traditional Pixar camera and staging process, we relied solely on the composition of our director’s storyboards.

Instead of ramping up an entire sets department, our team of 6 background artists hand-painted 106 unique backgrounds. Instead of rigging and animating a band of complex CG characters, we asked 3D animators and story artists to step out of their comfort zones and try their hand at 2-D animation. And instead of engaging Pixar’s amazing lighting, simulation, and effects departments, our director of photography Andy Jimenez composited, and added lighting & effects to every shot himself.

The wizardry and willingness of our crew to stretch themselves made it similar to a traditional Pixar film. But a key difference, which allowed us to create those detailed burrows in such short order was our collective focus on cutting just the right corners at just the right time.

b&a: Madeline, can you talk about your pitch for Burrow? Did the final film end up departing in any major ways for your original story/pitch?

Madeline Sharafian (director, Burrow): My pitch for Burrow happened really, really quickly. I was so afraid I’d lose the chance to make a Spark short that I only gave myself a week to deliver my first outline and concept to Lindey Collins, the executive in charge of the Spark program at the time. Even though I roughed things out quickly, that initial outline contained some little thumbnail drawings that ended up being exactly the same in the final! 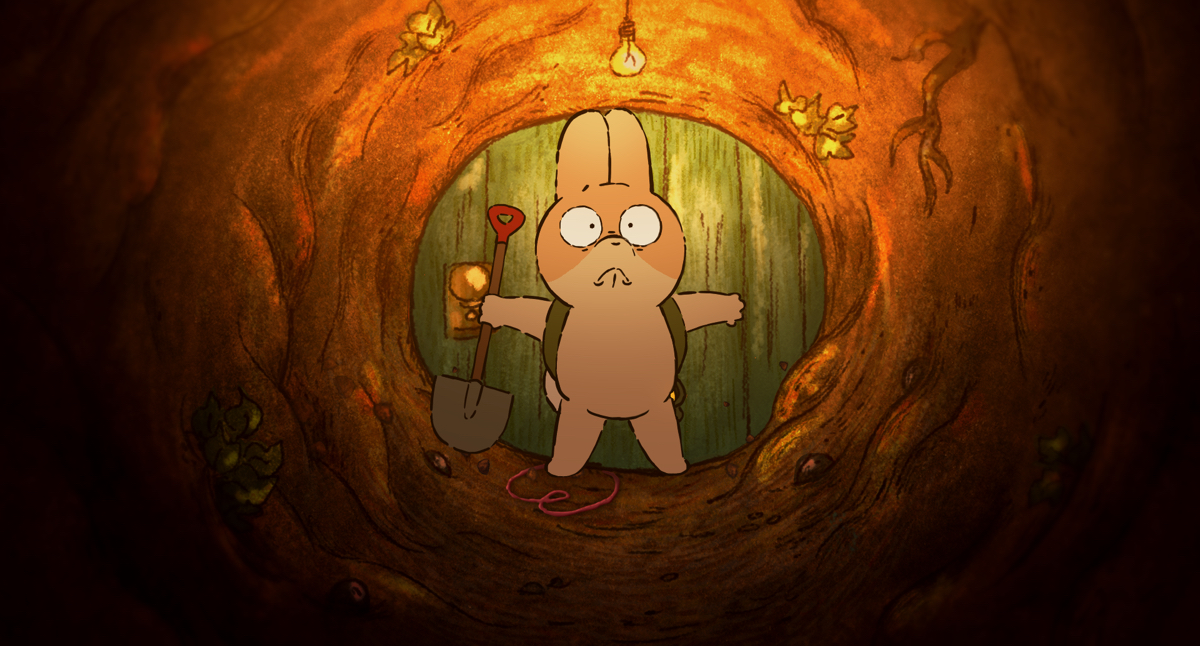 This was different from Pixar’s normal development pipeline because I didn’t have to pitch three ideas to a team of executives to narrow things down. I feel lucky that I was able to bring a fully formed concept and world that I truly loved directly into production without too much hemming and hawing. I prefer things to move quickly, so I don’t have the time to second-guess myself, so this was ideal for my way of making shorts!

b&a: What do you feel you perhaps learned about animation and directing that you didn’t know before you made Burrow?

Madeline Sharafian: This was my very first foray into directing, and my first time leading any kind of team at all! I’d made three films in college, all 2D and using pretty much the same pipeline, but telling someone else what to do… that terrified me! I learned that building one-on-one personal connections was the solution to this fear. Mike Capbarat and I went out of our way to visit the artists and animators every single day, not just to look at their work, but to get to know them.

By the end of the production, every room felt comfortable and that happy atmosphere meant that we ended up with time and energy to spare and had the extra pep in our step to add the button you see post-credits. I’ll try and approach leadership and directing the same way if there is a next time; I think you can tell if a crew had a good time making something, and it adds an extra shine to whatever the project is!

The painterly approach for Out

b&a: What different kinds of experiments did you undertake to get a final painterly look for Out? Any routes you went down that you liked but ultimately were not used or didn’t work for the story?

Steven Clay Hunter (director, Out): Early on we had the target of a Mary Blair type of Little Golden Book painted world. So we had Paul Topolos paint over a few select storyboards with that in mind for us to use as a template. Then it was up to our DP of lighting Andrew Pienaar working in tandem with our look development supe Colin Thompson to figure out how to make this work in our pipeline. 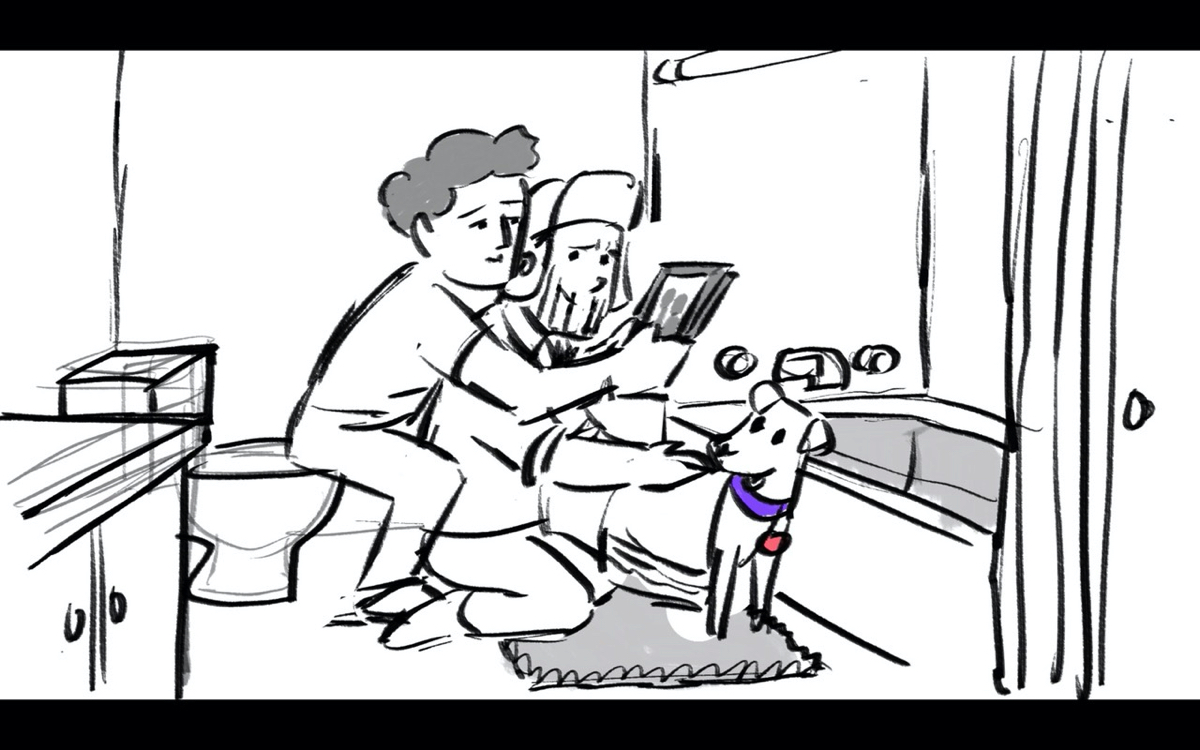 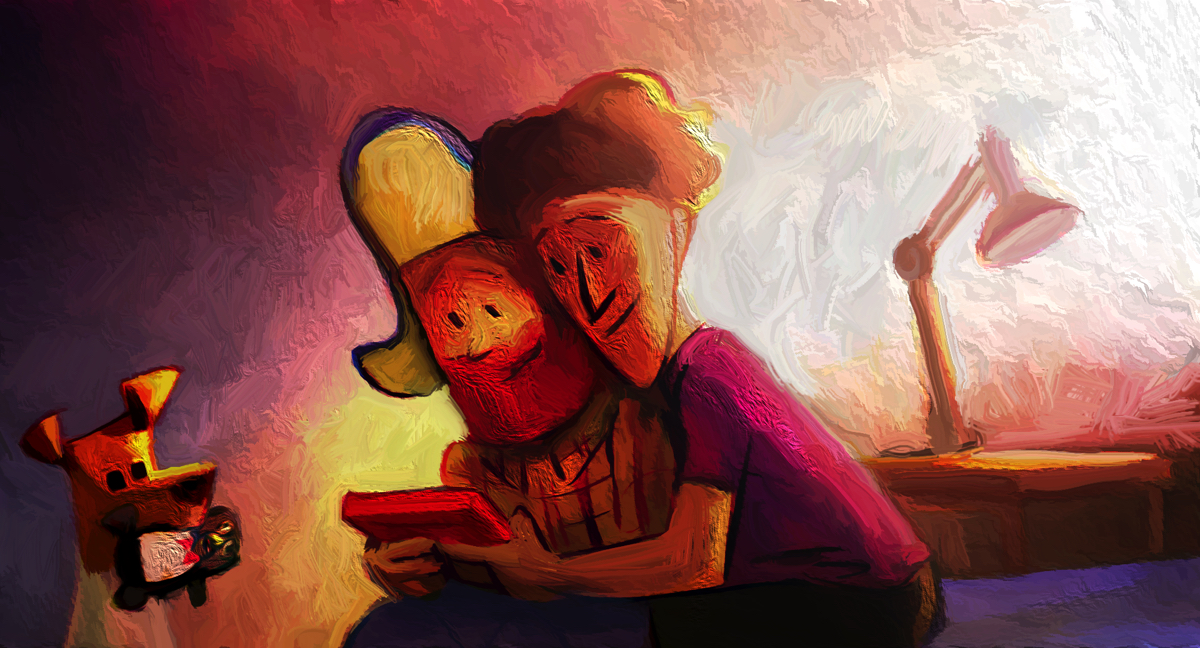 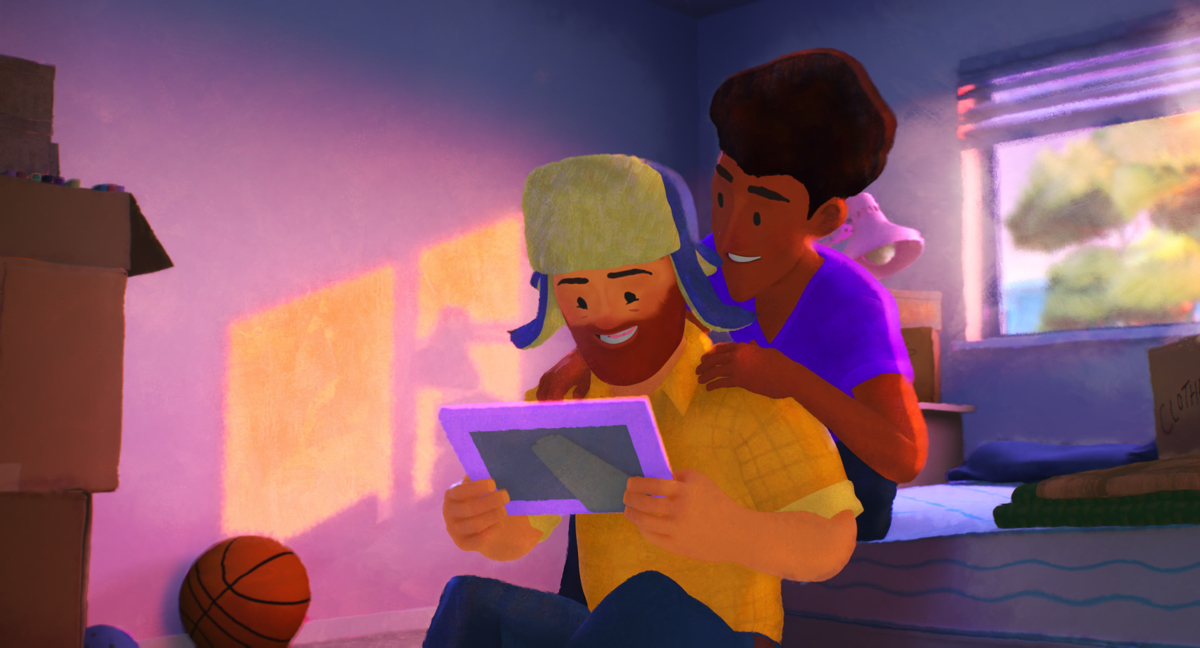 This required a lot of back and forth between Katana and Nuke to find just the right balance between 3D lighting and overlaying all kinds of zany ways to imply that a hand was actually painting every frame.

But you’ll have to ask them how they did it, because it hurts my brain.

b&a: There’s something about the final approach you took that feels ‘hyperreal’ (as if it was something that you went out and filmed) but still stylized. Do you think you can describe why it feels like that?

Steven Clay Hunter (director, Out): Interesting. I think some of that might come from our camera and layout pass. While we were going for a more 2D painted look, we did put all of our training from shooting our features into our camera work.

I’d worked with my camera DP Matt Silas before and we had very similar tastes when it came to shooting. But there are things you can do with an actual camera that you might not want to see in a painted environment.

There were times, for instance, where we were moving the camera too much. Like, we would try pushing and arcing the camera around Greg as he comes into the bedroom to sit with Manuel, and Matt and I would look at each other and shake our heads. It was just too much. It just pulled you out of the charm of the painted world.

Our hope is that we found just the right balance between painting and photography.

b&a: For you and members of your crew, what is like to ‘depart’ from the usual approach to animation production at Pixar with shorts like this?

Max Sachar (producer, Out): Short films have always been an important part of the studio’s culture and history, and it’s always been a platform for our filmmakers to experiment with new stories, and new technologies, many of which influence the way we make our feature films.

For those of us who’ve worked in the shorts program, it’s our favorite medium for lots of reasons. The crews are smaller, there’s far more ownership, and less oversight, so it creates this fun, scrappy and extremely collaborative atmosphere.

With the SparkShorts program in particular, I think we’re turning the clock back a bit, and capturing what those early years felt like at Pixar: risk taking, visual exploration, and unique stories from a fresh set of filmmakers. Who wouldn’t want to be a part of something like that?