What to expect in the new Houdini release from SideFX.

It’s time to get a bit more technical at befores & afters, which is why we’re partnering with Escape Studios to showcase new software and hardware releases.

First up is this look at the just-released Houdini 18.5 from SideFX, a .5 release that features a lot of great, well, features. Here, Escape Studios’ head of 3D and Houdini accredited trainer Mark Spevick dives into what he sees as the main parts of 18.5 you should check out.

Mark Spevick: I have really enjoyed exploring the new features of this release and there are some great new workflows in modelling, DOPS and vellum and many others. There is also an amazing new feature set for animation and rigging called KineFX.

I have found that a lot of the enhancements, in this 0.5 release, are mainly to speed up creative workflows by having assets of commonly used setups. These higher-level assets allow the new user to Houdini to create complex effects very quickly and for the expert user they are a fast way to create common setups. This is a great approach as it makes complex effect creation much more accessible to the new Houdini user or those without the time to create such advanced set-ups.

Houdini is known for being able to create networks to just about do anything, but this can be very complex. Recently SideFX have been making higher level assets (basically pre-built networks) for common tasks to enable those with less experience or time to create fantastic effects out of the box.

For example, we often want to copy objects along paths to create fences, chains, tracks, tubes etc. There is a new Chain SOP which allows us to use custom geometry and place along a curve with lots of controls. It would take a while to build a similar setup with the same controls, but now we have a tool to do that quickly and easily. This is complemented by a new deform along path node and a new scatter and align SOP to easily create the correct attributes for copying and instancing geometry. 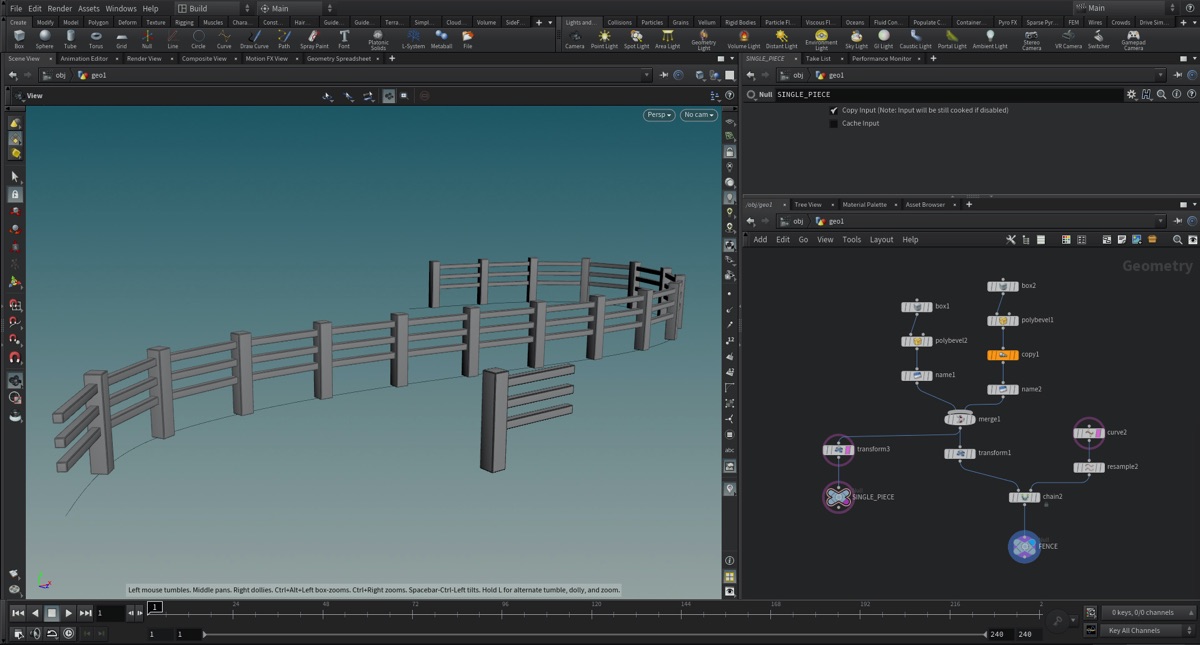 Chain and Path SOPS (Surface Operators): This philosophy of taking away the pain of making complex networks to replace it with much more creative workflows continues in the new exciting Pyro tools. 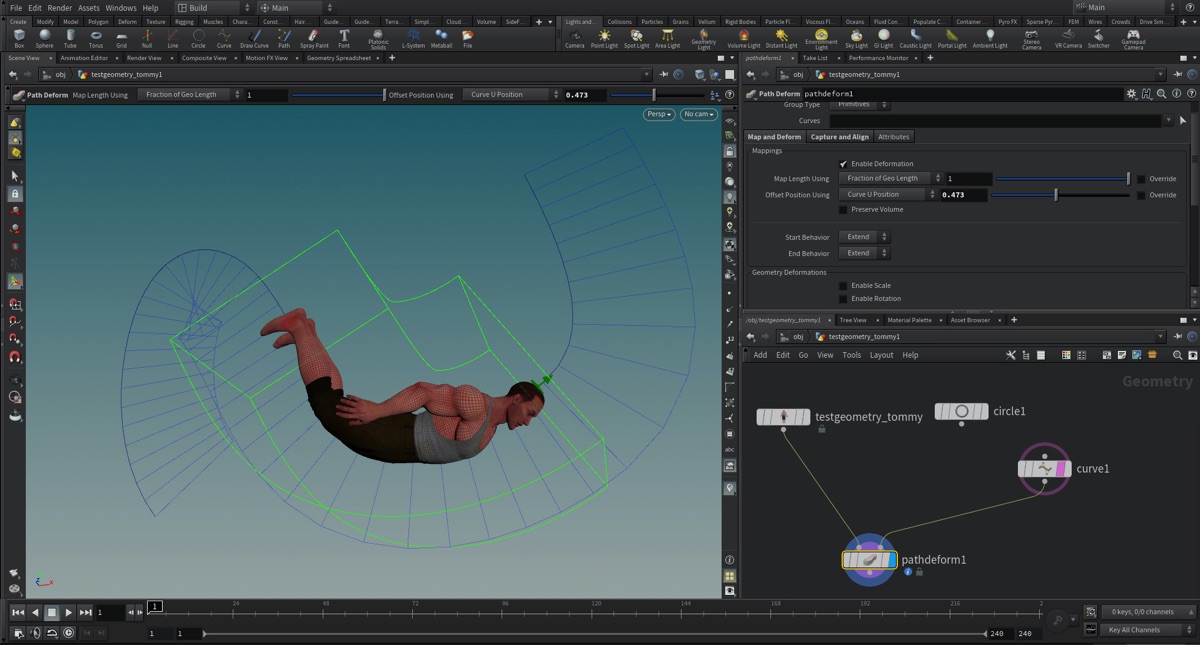 The new burst and trails sourcing nodes allow us to make controllable sources for explosions and trails all within SOPS. They have timing controls and paths to control the trails that you might want to see. These all feed into the Pyro SOP solver which has a great new feature which allows Houdini to run a high-resolution Pyro simulation on the GPU. It is called the minimal open CL solver and as the name implies it cuts down on some features for speed, and boy is it fast. 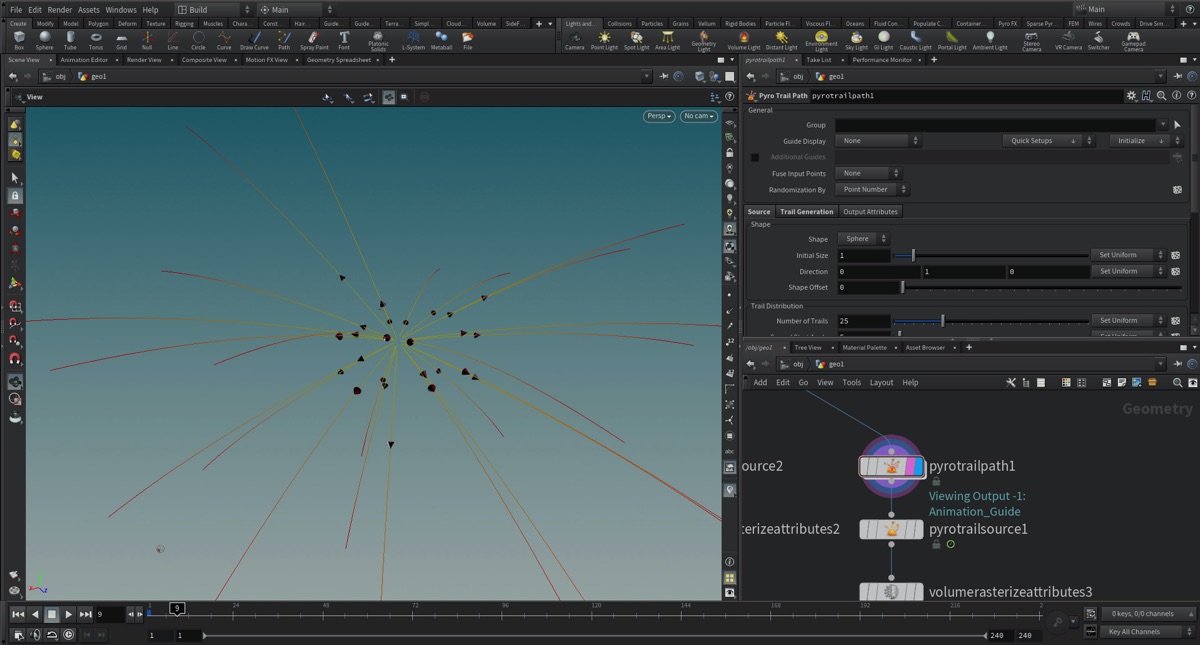 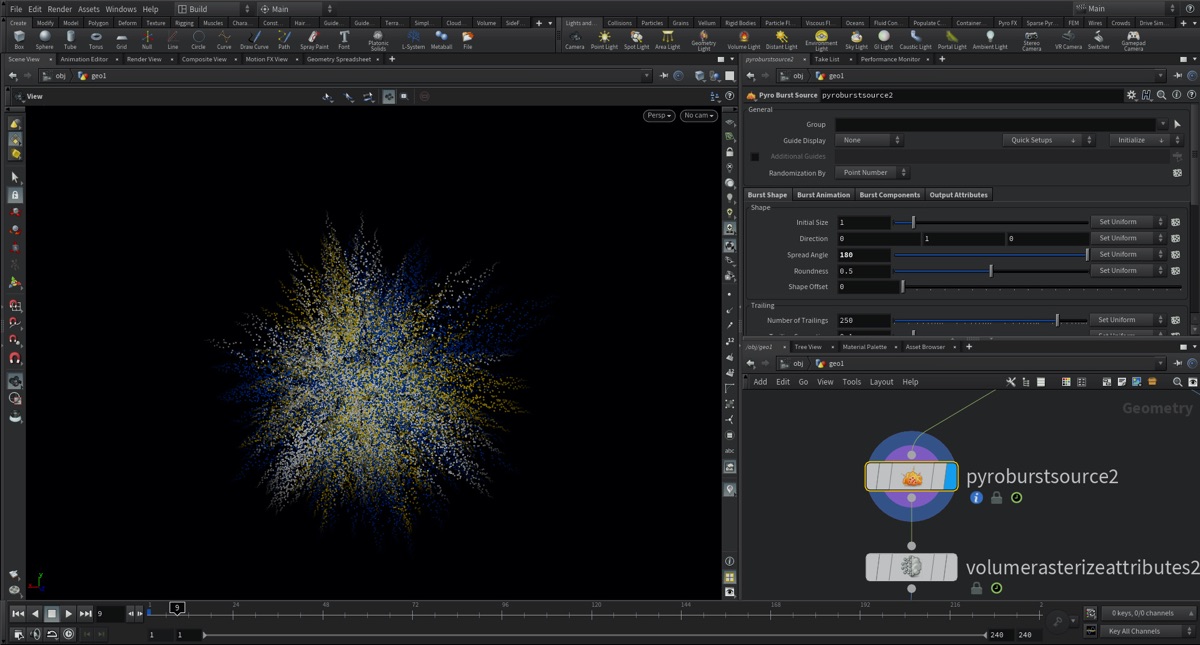 I found this to be particularly useful as I could iterate between different setting and sculpt my look very quickly indeed. It is for design and you do need to perform a proper solver, which is slower, for the final look.

Shading Pyro convincingly has always been tricky but there is a new Pyro shader and a Pyro Bake SOP node which has some amazing controls out of the box to make the Pyro smoke and fire look amazing and detailed. You have the option to create internal scattering and bring out details in the sim. This all looks amazing right there in the 3d viewport, especially with the new viewport volume rendering. It is almost as good as the final render! 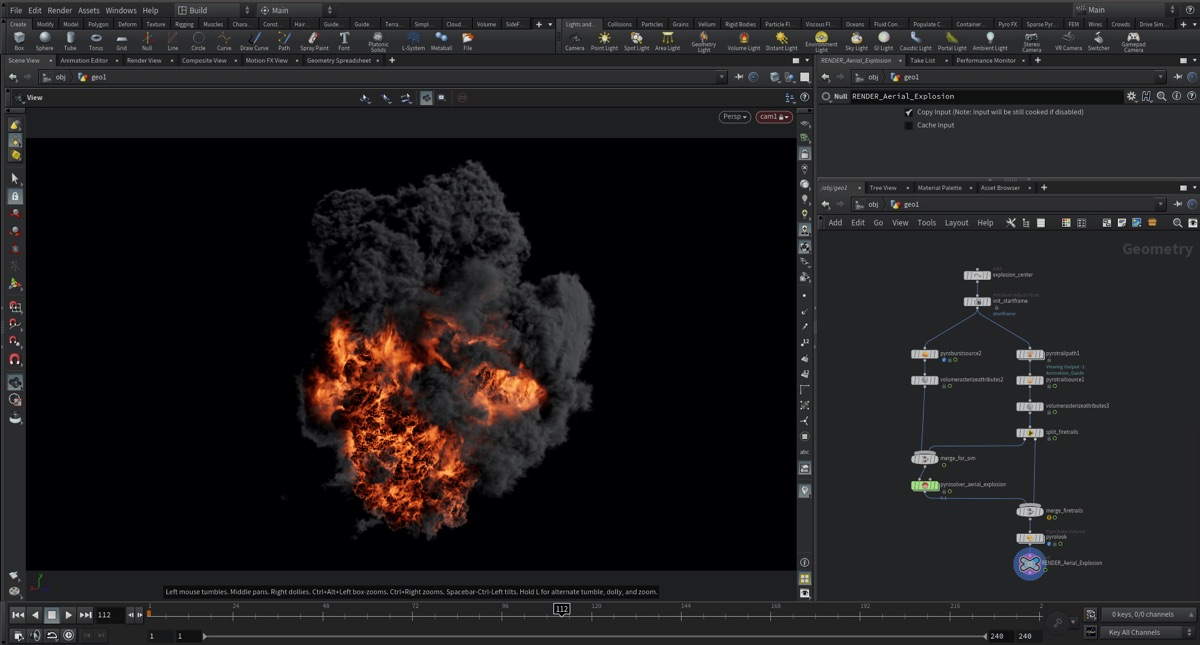 Talking of simulations, there is the new Vellum brush which simulates as you brush and allows for some amazing sculpting possibilities. It is now really easy to model hanging or draping cloth. This is all accelerated in OpenCL with the new fast pressure constraints.

For Solaris and Karma, which is still in beta, there are a lot of speed and workflow enhancements. One of the most fun is the new interactive physical camera in Karma. This allows very interactive setup of complex lens effects such as depth of field and bokeh. 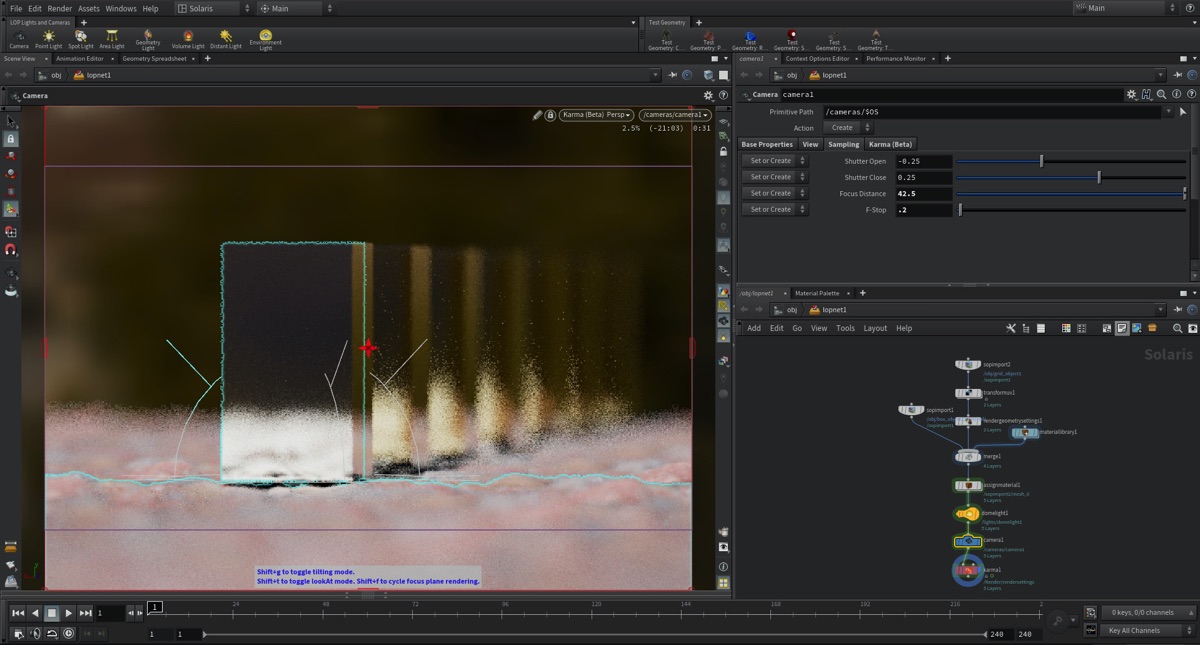 Unusually for a 0.5 release there is a new feature set called KineFX. This is only in phase one of this release of Houdini and as with all new features in Houdini, it will be developed and added to in the new versions. 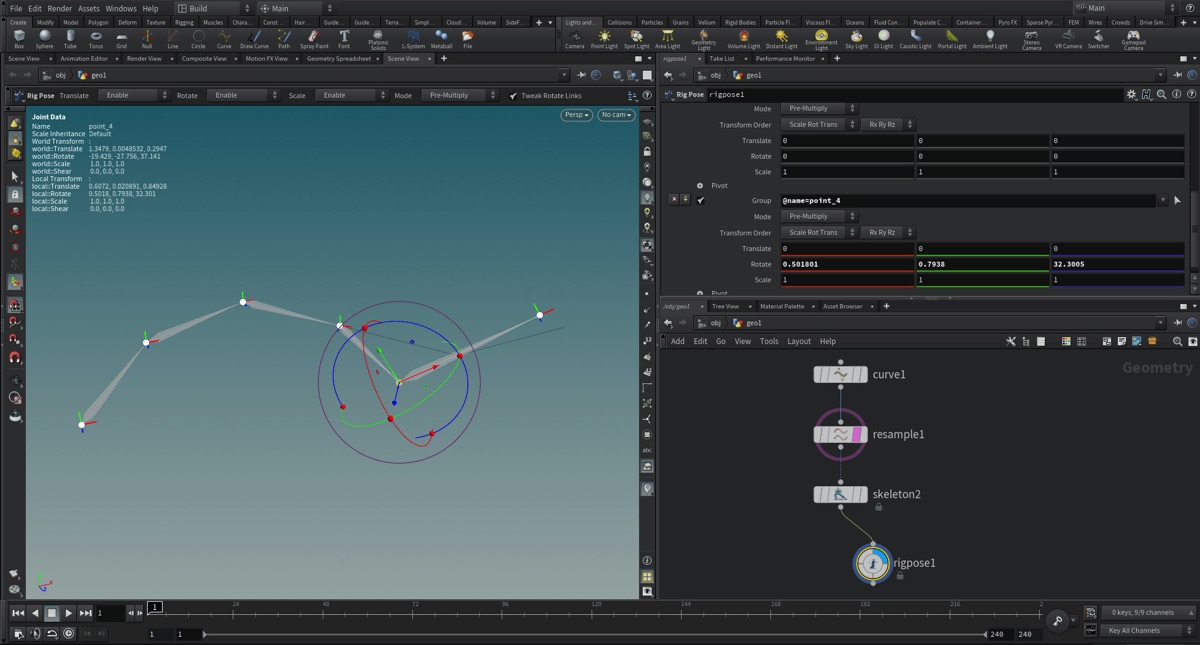 This is a truly procedural rigging and retargeting framework all within SOPs. Moving from the object level down into SOPs allows the use of all the Houdini procedural nodes to affect the rig.

Therefore, you could use Vellum to simulate a joint chain. Joints are now represented as points and lines using the new Bone Deform SOP, which allow all sorts of procedural ways of making and controlling rigs with the familiar SOP tools. It is much easier now to bring in FBX rigs and add them to the KineFx system. Before this release, the rigs would come in and make lots of nodes, but now we just get one with 3 outputs. This means we can easily plug in our FBX rigs directly into the new KineFX nodes.

There is even a new Physics-based full body IK solver with control over centre-of-mass. This lets the rig dynamically try to keep its balance and it looks very realistic. KineFX also integrates with the crowd system fully and even has controls to mix animations and fix complex issues such as foot slipping.

Overall, this is a great release and I have not even mentioned half of the cool updates in this review. SideFX are really trying hard to make creating a lot of common effects simpler with these higher-level set-ups in SOPS. You can now spend more time on crafting the effect to look great rather than spending time setting up tricky network to have those controls.

For the most part, it can all be done in SOPS, which is a bonus if you don’t have the full FX license. This is great thinking by SideFX to make it easier and faster for anyone to create fantastic work very quickly in Houdini.

Get bonus VFX content by supporting us on Patreon!

There are no comments