Inside the VFX journey to make the animals of ‘Babe’ talk.

Babe just turned 25 last week. It won the 1995 Academy Award for Best Visual Effects, considered then a minor upset because the other contender was the larger effects-filled Apollo 13. But there’s no doubting that Babe, directed by Chris Noonan, certainly advanced the art of talking creatures, via live performance of trained animals, animatronics and the addition of CG muzzles to live-action animals by Rhythm & Hues.

In celebration of the film’s quarter-century anniversary, befores & afters has already gone back in time with the Oscar-winning animatronics supervisors Neal Scanlan and John Cox. In this new story, fellow VFX Oscar-winners, production visual effects supervisor Scott E. Anderson and Rhythm & Hues visual effects supervisor Charles Gibson, share their memories of working on the project, which was made at a time when digital effects in films were still in their relative infancy. 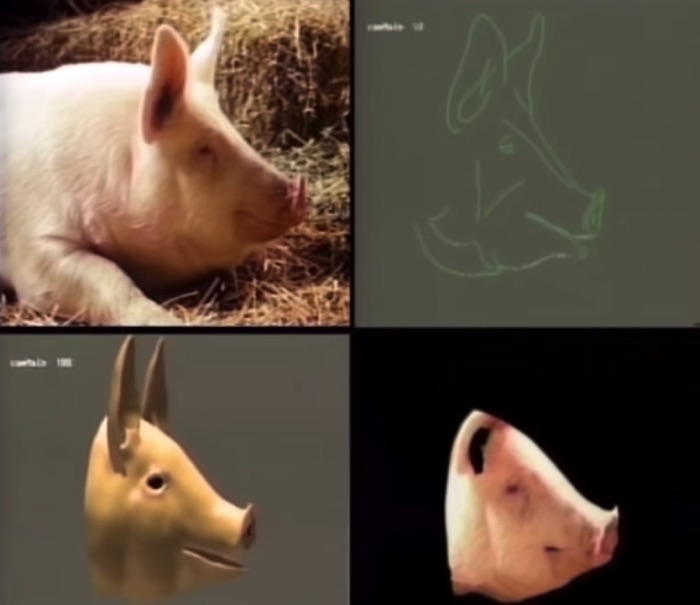 A time of VFX tests

Back then, visual effects tests were a key component in getting many films featuring adventurous CG work greenlit (of course, that can still be true today). Interestingly, the idea for Babe had been percolating for some time with producers George and Bill Miller and Doug Mitchell. Anderson had even seen the script while working at ILM prior to production on Terminator 2: Judgment Day.

“It was like, no way is this going to get made,” recalls Anderson, on reading the Babe script. “But, flash-forward a couple of years and my phone rings at home and it’s producer Doug Mitchell calling from Australia. As soon as he started mentioning talking animals, I said, ‘Is this Babe?’, and he completely freaked out—‘How do you know about this!?’ I told him I had read the script at ILM…”

In parallel, the producers had begun noticing the work of Rhythm & Hues, which had crafted a talking chimpanzee for a Michelob Golden Draft commercial and taken things a step further for a speaking cat in 1993’s Hocus Pocus. That effect involved replacing the head of a live-action cat with a CG head and making it talk. Ultimately Rhythm & Hues would utilize re-projection methods on top of live-action animals for Babe. 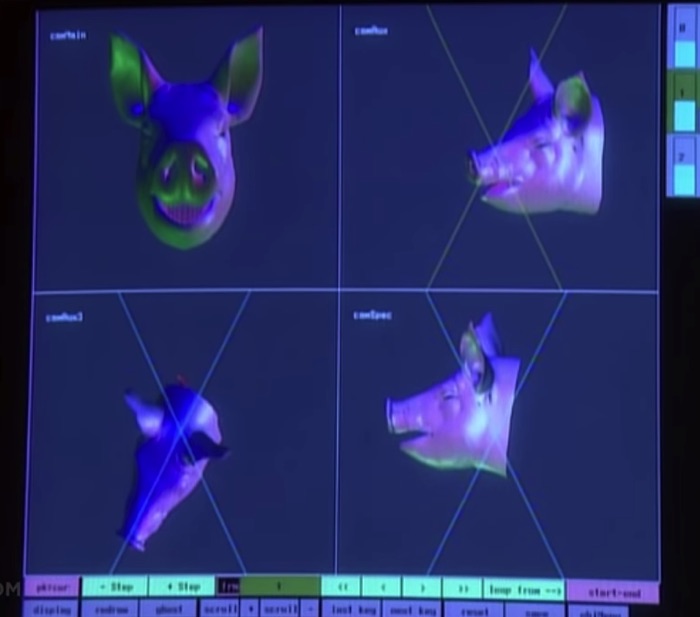 At one point, a test for making the animals talk was conceived by Kennedy Miller to see what would be possible. It featured a large sow speaking a line recorded by actor Jack Thompson.

“I believe the line was, ‘I dreamt they made a movie where animals talk. You know, really talk,’” remembers Gibson. “R&H was not the only company to have worked on a concept, though. George Miller and co were famously tight-lipped about their previous efforts. I remember seeing a DX of hand-drawn 2D pencil animation on top of a 3/4 profile take of a pig’s head. I think their original approach may have been to use an animator’s work to guide the fanciest 2D image warping/paintbox system of the era – maybe a Quantel Harry or Domino or an early Discreet Logic system.”

What Rhythm & Hues devised, instead, was a re-projection method. “We were given the footage, and using 3D hard/soft surface tracking and re-projection, we produced the test that resulted in our getting the show,” outlines Gibson. “To my knowledge nobody else had used this approach for a live-action animal performance.” 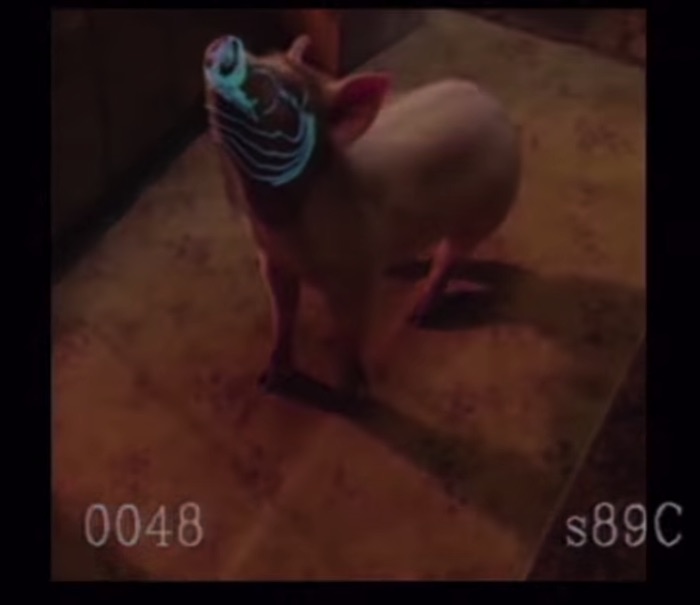 Artist Larry Weinberg, who later developed the 3D tool Poser, crafted the sow facial animation at Rhythm & Hues using a model modeled by Keith Hunter. Rhythm & Hues’ Bert Terreri was also involved. In a note to Gibson about the test recently, Weinberg recalled that, ‘At the time, the SGI machines didn’t have sound cards so to play animation with sound I wrote code to trigger my Mac to play the audio from a command from the serial port connection.’

Weinberg added that when George Miller and Bill Miller saw the test, “They went berserk. They said, ‘We can make this movie.’”

In addition to the test, the production had also invested heavily in storyboarding scenes with great detail. Anderson and the filmmakers used these storyboards to help work out which scenes could be achieved with trained animals, which were suitable for animatronics, and which would involve CG take-overs. 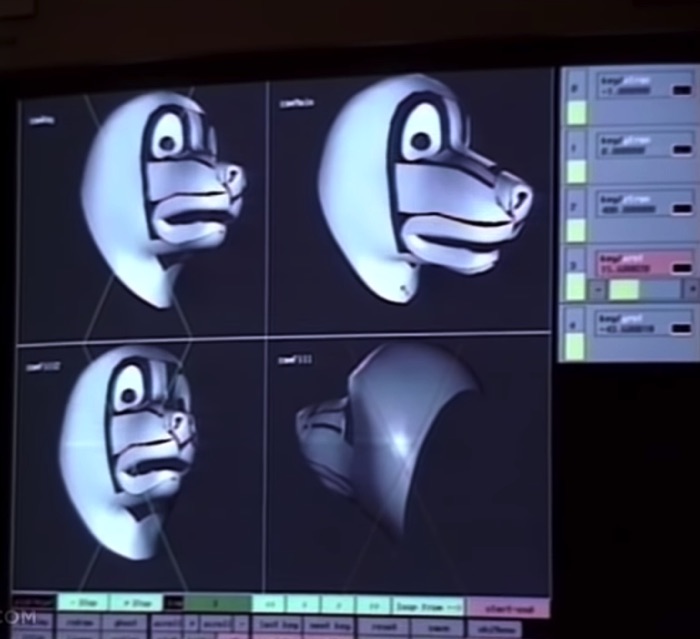 “We weren’t trying to make the animals do anything animals couldn’t do,” says Anderson. “We were trying to figure out what things they did that made humans react. The production team did these full-on storybook-like comic books. Actually, they weren’t just storyboards, they were more like comic books telling the whole movie. The artist was Peter Pound, his work was amazing.”

Anderson also took things a little further by “breaking down the movie into techniques based on how hard they were and how important story-wise they were. I came up with a system where we called out A, B, C or D story moments. An ‘A’ story moment was an important story moment we had to figure out how to get. If it was a D story but required A ‘money’, it probably wasn’t going to survive the time of day. Still, you kept those moments in mind, just in case we got lucky and got a performance to fit the beat. You have to be prepared story wise and technically to take it and run with it. If it was a good moment that we could get, we would embrace it. Everyone was always trying to always balance the story against difficulty.”

The shoot in Australia would prove logistically challenging, stemming, of course, from the practicalities of filming with real animals and with animatronics. But, as Anderson relayed, “when Chris said he was shooting his animals like movie stars, he meant it. That meant the camera lens had to be inches over the ground. Andrew Lesnie and his team were constantly digging holes and putting the camera body below ground so that the lens would be able to look up. It was just that kind of little tiny detail on so many fronts.” 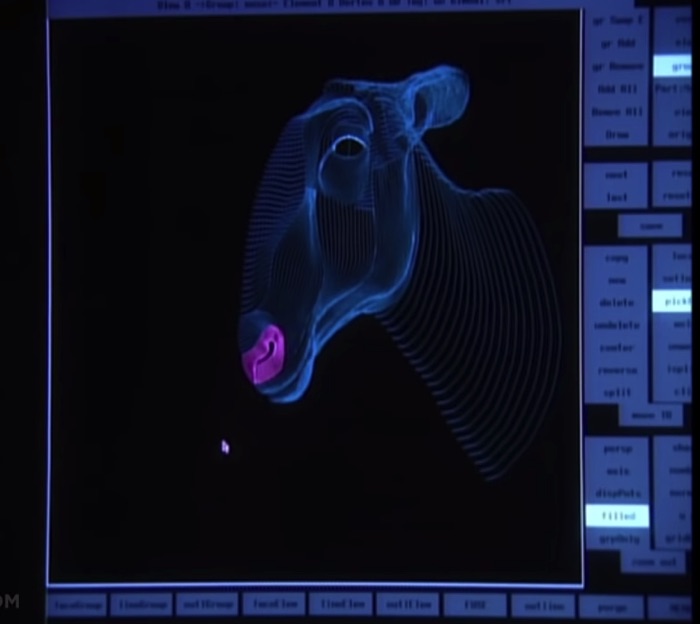 In general terms, the animals that would be receiving CG mouth treatment were filmed up close for VFX shots. Anderson tended to take a few bracketed reference stills, but these were the days before any gray or silver ball light probes. “There is, though,” notes Anderson, “a pretty funny movie out there somewhere called ‘The Red Box’, which is the red apple box that we used as our size reference. After every shot we’d go in with the red box, shoot it on film, and measure its distance from camera. That gave R&H a known object of a known scale to work with.”

Some motion control was employed, but only minimally. The biggest motion control shot is seen in the opening of the movie when the camera sweeps over the suckling piglets. “Each of the sows was a different motion pass and that was a day’s shoot because they only feed for like 15 seconds each,” explains Anderson. “The establishing shot of the movie and the pigs enclosures were entirely different locations. We stitched 4 or 5 passes together to travel with the feeding piglets and to then reveal the epic towers of pigs, and time that with the arrival of the truck that would take Babe’s mother away.” 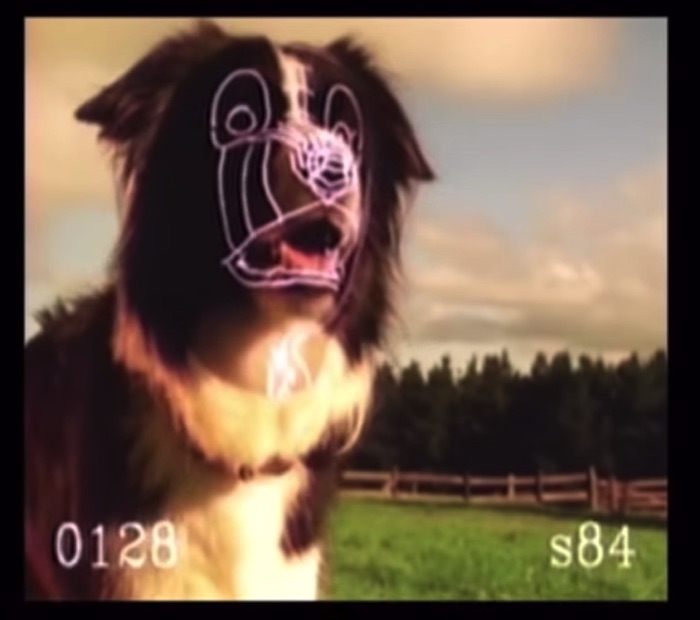 For their visual effects shots, Rhythm & Hues would overlay CG animation on top of the live-action animals. This first required meticulous tracking of the animal’s head and particular mouth features, before exploring the animation, and then re-projecting the CG onto the live-action.

“It took some time to find the right performance style for the animals’ facial animation,” admits Gibson. “Just replicating the motion of an actual animal’s mouth in sync with dialogue looked flappy and weird. Using animation mouth shapes in a realistic context was odd and distracting.”

“We finally settled on an approach where we didn’t try to model every syllable but rather a subset of highs and lows for the performance,” continues Gibson. “The guiding principle was that it should feel like found footage; that the filmmakers got lucky and were able to get some mouth motion that synced up with the dialogue. We broke a few anatomical rules to enhance expressiveness such as adding an extra joint to a jaw, enhancing brow mobility, eye shapes and cheek squishiness—that sort of thing.”

Since so many pigs—around 48—were utilized during the shoot, Rhythm & Hues had to adapt their CG models depending on the shot, often re-sculpting and re-projecting where necessary. Gibson explains further: “The production employed multiple sets of animals, some of them changing size with age over the course of a long production, all of which had to be hand-tracked very precisely. R&H didn’t have any interactive compositing tools at the time so the tracking and re-projection work was all done using its proprietary 3D animation and rendering software. It was fantastic work by some amazing artists.”

A meeting of techniques

While Babe was certainly not an effects-focused film, effects were at the core of its heart-warming story and combination of real, animatronic and digitally-aided animal performances. These animals captured the hearts of the world and the minds of Academy voters who awarded the film the Best Visual Effects Oscar. Both Gibson and Anderson fondly recall the interaction they had with all the crews responsible for bringing the animals to life.

“I was always struck by how well the film worked without digital effects,” comments Gibson. “Neal Scanlan and John Cox and animal trainer Karl Lewis Miller filled key moments with their animatronic performances. By the time we received the sequences, they were already playing, the performances were working, the intent was clear.”

“I remember getting some love from Neal Scanlan, one day in particular,” notes Anderson. “I suggested a very practical solution to a shooting problem with Ferdi, our hyperactive duck. The Ferdi puppet couldn’t blink its eyes, but we had this scene where he falls asleep. We could only either have the eyes open or closed, as the lids had to be glued on. I was called over with the request, ‘Can we close them in CG?’ But standing there, I said to Neal, ‘Well, if it’s okay with Chris, why don’t we make one eye open and one eye closed. We’ll have Ferdi roll his head to the other side to sleep, and we’ll reveal the closed, sleeping, eye.’”

“I just remember Neal going, ‘That’s perfect! That’s classic puppeteering.’ It was as if I had earned my Henson’s membership card. ‘You’re one of us.’”