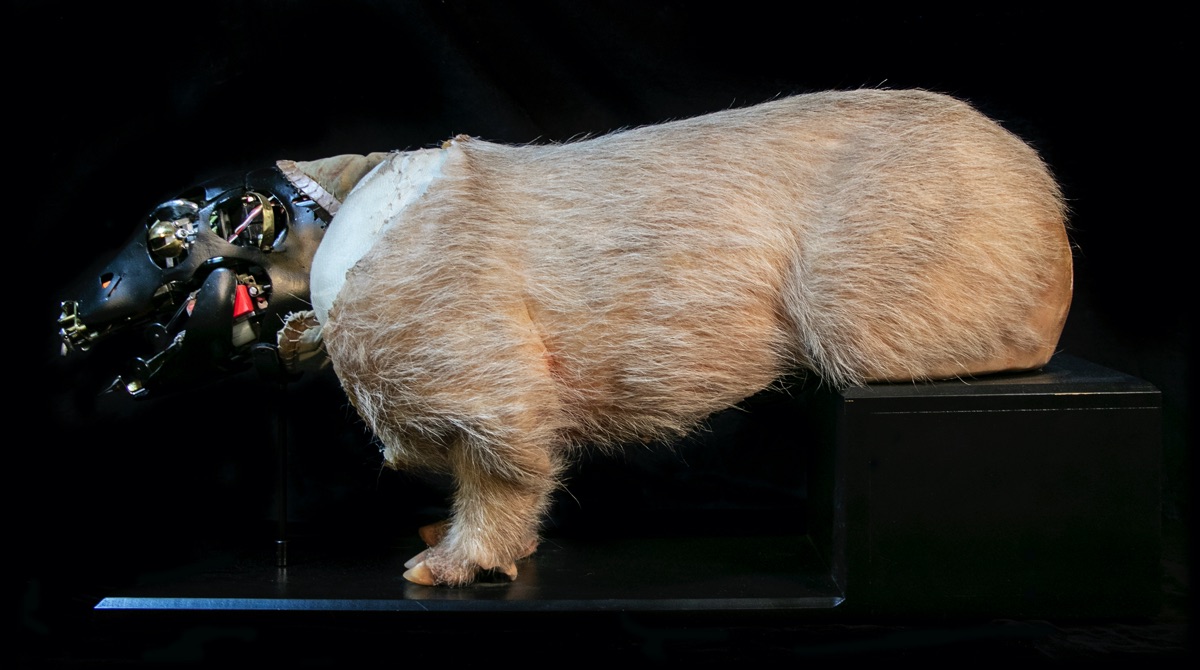 ‘When you watch a pig, it’s never still for one second.’

You may know Neal Scanlan as the creature effects supervisor behind the recent Star Wars films and Jurassic World: Fallen Kingdom. But 25 years ago, he was the creative project supervisor at Jim Henson’s Creature Shop on Babe.

Key points:
– How two tests of an animatronic pig were done by Henson’s for the film
– What pig behaviors were followed and replicated in the animatronic pig
– The technical puppeteering process, including the use of the ‘Henson control system’-

The Creature Shop handled the build for several animals, including the central pig, plus the puppeteered performance of all the on-set animatronics.

This week befores & afters is going back in time with the film’s VFX Oscar-winners. Here, Scanlan discusses the early tests done by Henson’s for the pig, and the detailed puppeteering process that followed during the shoot in Australia.

b&a: Neal, what are your first memories of Babe in terms of how it became a Henson’s project?

Neal Scanlan: Well, it was all a very memorable experience. Babe actually came around at a very depressing industry time, in some ways. There was peaks and troughs in the industry, it was quite a quiet time in the industry but it was just beginning to bubble back up.

I remember [producers] Doug Mitchell and Bill Miller coming to the Creature Shop. They explained that they were looking into the possibility of this project about a talking pig. That was as much as they wanted to say at the time. I gave them the grand tour of the Creature Shop. The Creature Shop was quite a way-out place in many ways. I think it resonated with Doug and Bill. I think they liked that feel to the place. I remember that visit as being a very positive one.

b&a: What was the first thing Henson’s did after getting the project?

Neal Scanlan: We decided to do a first test on producing a talking pig’s head, crazy as that might sound. It was a perfect testing ground to see whether or not we could do something that could intercut with a real animal. That led to a film test which we shot in Los Angeles. When I say the ‘head’, it actually had a body, but the body didn’t move. It was really just a test of the articulation of the head and its ability to be able to perform some dialogue.

I remember that it was successful on many levels. It certainly gave Kennedy/Miller the confidence to move ahead to a second test. So the first test was really just your generic pig – a good ol’ honker, with all the warts and scabs and the dirt and the crap and everything else that comes with it. The second one was focused on a little sequence and piece of dialogue that George had chosen. We would shoot that in the UK, and we were going to shoot that in isolation in a little spotlight. There would be Babe in the spotlight talking to a narrator’s off-camera voice.

This time, we went for the more loveable side of little pigs. A lot of our time was spent looking at the things that we really respond to as human beings and why pigs are so adorable. Let’s be honest, they are. They’re wonderful little creatures and animals and that’s why we fall in love with them so much, and why they’re so loved. The size of the ears, the size of the nose…all those aspects.

We tried this time to bring those qualities in, and also look at how it could be really performed bringing some element of humanization to the characters so that we didn’t lose the raw nature of what Babe would be. But we also asked ourselves, what could we add to that to make him watchable and to make him so that we engaged with him?

b&a: What happened when you then came to Australia, in terms of performance of the animatronic animals on set?

Neal Scanlan: There was a separate team for each animal. Primarily, the ones that played the major part were Babe the pig, Ferdi the duck, Duchess the cat, and then there were Fly and Rex the dogs to a much lesser level. What we actually found was trying to replicate dogs at the time was way tougher than any of the other animals, just because I think we know them so well. We weren’t able to be as successful. Luckily enough, they didn’t feature as much in the film.

We had started to build the animals in the UK, the animatronics. Then we moved out to Australia so that we had time to set up a workshop where we could be alongside the actual animals that were going to be used in the film. This way we could try and make them movie-perfect and at the same time, rehearse. We split our days between rehearsal in the morning and cosmetic and constructional work in the afternoons. Each puppeteering team would work on the scripted lines and on the sequences that we knew.

Every single shot and nearly every single angle was storyboarded. We had a really, really clear blueprint of where we would be playing the part in the film and where CG would be playing the parts. This meant we could rehearse our moments. And then it was really a matter of showing Chris Noonan and George Miller those rehearsals and just getting the general consensus and general feeling of how far they wanted to push the anthropomorphization.

The important aspects were to punch a piece of dialogue out and find where you might be able to stretch certain things. Ferdi is a great example — you can set Ferdi up as a duck and have him act very duck-like, until he starts to slightly lose the plot. And then you can really push it and go beyond, obviously beyond reality, and get into real characterization. The audience will come with you.

b&a: How was the performance of Babe handled, from a technical point of view?

Neal Scanlan: The thing that we keyed into most with Babe was that, when you watch a pig, it’s never still for one second. They almost slightly vibrate. I think it’s that they’re almost sweating slightly all the time. They have this little vibration that runs through their entire body. That was something we locked onto.

Whenever an animal was on the move — say they were walking in or out of frame or were walking during a shot — that would have to be a real animal and we would have to do that with CG. Because the one thing animatronics can’t do, and still can’t really do that effectively, is walk or run or jump or do any of these things. It’s relatively ground-bound.

In the case of Babe, there were really three positions that we would find a pig in. It’s either standing, sitting, or lying. Because the body anatomy changes so immensely when an animal will go from a standing position to a sitting position, and then to a lying position, we felt that we couldn’t achieve that with just one animatronic body. What we did was to sculpt three very separate poses. A Babe that sat, a Babe that stood, and a Babe that laid down. Each one of those was fully animatronic.

The thing we did for Babe that we had never done before at Henson’s was that we went back and said, ‘Look, let’s throw everything in the bin. We don’t know how to do this. Of course, we’ve got huge amounts of experience at buildings things, but let’s start all over again.’

The first thing I did was get quite a few guys in from the National History Museum rather than animatronic builders or puppet builders. We got some people who were used to replicating dinosaur skeletons and archaeological elements. We reversed-engineered everything. We started with the skeleton and built the mechanical version of the skeleton that was driven through motors in a very similar way that old puppets were, where you used to press the bottom of them and the tension in the figure would collapse. The figure would collapse down, which is almost like releasing the tendons. We worked on a similar system to that.

We built this system that was all cabled through the skeleton. And by loosening and applying tension to these cables, you could get the body to move in a way that it would have moved if it was being moved by muscles rather than just moving the joint. Things moved in a sequence rather than just on their own. And then to that, we applied muscles that we had made that could stretch and bulge and act as much like a real muscle as it possibly could.

On top of that, we applied the skins. Essentially, we ended up with a body that was completely controllable using the Henson control system. The Henson control system was a system that was based on the ergonomics of you putting your hand into what we called a mitt, which was very similar to putting your hand inside a hand puppet. Like performing Kermit for instance, except the mitt was a mechanical electronic reader of your hand movements. It was very familiar to the Henson puppeteers.

It was a familiar system for them that allowed them to put their hands into these gloves, and the gloves were on a joystick. By moving the joysticks forward or backwards, the body would lean forward or backwards. If you moved it to the side, then the body would lean to the side. And then if you twisted it, then the body would twist to the left or to the right. That might be your left hand. And then your right hand would be in control of Babe’s neck. Your thumb would control the jaw, and then your fingers would control the individual inputs to allow you to make the snout move or make the lips curl or pout or whatever.

It sounds incredibly complicated. Mak Wilson, for instance, who did Babe, was a brilliant puppeteer at doing this sort of stuff. It was like watching him play a piano. He didn’t really think about what his hands were doing. He would just watch Babe and interpret straight through. It was a visual thing. ‘I want Babe to do this,’ and his hands would do it.

Then other little signs like the flicking of the ears or twitches of the nose were performed by a second puppeteer who would work alongside Mak in this particular instance. That person would be responsible more for the life signs and just keeping the animatronic alive so that there was this ‘not automated’ thing, but there was this attention to keeping Babe alive.

Check out our previous chat to fellow Babe VFX Oscar-winner, John Cox, who discussed the making of robot sheep. And next week, befores & afters looks at the digital side of bringing Babe to life.